Following along from the Club's recent tradition of employing captain/coaches came the appointment of 100-game player & 1976 premiership ruckman, John Fanning, to the role after Mal Allen returned to Port Melbourne after 31 games with Williamstown in two seasons. Peter Kerr was made vice-captain while Keith Webster was coach of the Seconds and assistant to Fanning. Recruits Paul John (Spotswood), Peter Enright (Spotswood), Mal Taylor (Essendon Thirds) and Geoff Bebend (Altona City) all made their senior debuts in this season but the Club lost the services of best & fairest winner and dual premiership player, Robert Percy, after 135 games and 63 goals from 1969, who went to West Footscray as captain-coach. Also departing were Ray Powley (captain-coach of Williamstown United) after 19 games from 1974 and 1976 premiership player, Mick Mahoney (father of Josh Mahoney), who retired after 31 senior games.

It would be one of the darkest seasons for the football club with limited funds, disgruntled players and a board on the verge of leaving the club for dead. Former premiership player, Sid Wookey, was talked into accepting the presidency of the Club, the sixth new chief since Arthur Johnson stood down at the end of the 1972 season. Wookey played from 1950-1957 before a knee injury ended his career after 136 games and 31 goals, including the 1954, 1955 and 1956 premierships. Champion centreman of the 1950's, Johnny Martin, also returned to the Club as chairman of selectors.

The season saw Williamstown set a very unforgettable record where they had the worst season for a team freshly relegated to second division, finishing second last with just three wins and 15 losses and in front of only Box Hill, which registered just the one victory, ironically over Williamstown in round 13 at Box Hill which ended a losing streak of 34 games, going back to round 15, 1976. The Mustangs booted 14.3 in a spectacular opening quarter and went on to win 25.16 to 17.17. However, the Seagulls would go on to win the next 12 games between the two clubs before a draw at Williamstown in 1989, their first points at Pt Gellibrand since 1954.

The first of the Seagull wins was over Werribee at Pt Gellibrand in round one, followed by a 77-point win over Box Hill at Williamstown in round 4 which left the Seagulls in sixth position, just two points out of the four. However, the next win didn't come until round 16 with a ten goal victory over Yarraville. Before and after then some large defeats were experienced, including a 99 point loss to Yarraville in round 7, a 91 point loss to Northcote in round 9, a 109 point loss to Camberwell in round 17 and a 112 point defeat by Northcote at Williamstown in round 18 to finish off a dismal year.

Two years after winning the Thirds best and fairest award, Laurie Taylor took out the Andy Taylor Memorial Trophy in the seniors from Neil Courtot. First-year player, Geoff Bebend, was awarded the most determined player trophy, while Paul John won the best first-year player award. Neil Courtot was also awarded the most consistent player trophy. Greg Boxall was leading goalscorer in the seniors with 32 for the year, closely followed by Rollo Goetz with 31.

Best and fairest in the Reserves was won by John Coyne with 1976 senior premiership player Frank Briner in second place. Bill Mitchell was awarded the most consistent player trophy.

In the Thirds, Kelvin Lavelle was awarded the best and fairest player for the season. He also finished as runner-up in the VFA Thirds competition award. Second was Peter Caulfield with Phil Chapman in third place. Chapman was the leading goalkicker in the VFA Thirds competition with a total of 129. When he booted his 100th goal for the year in round 13 against Box Hill, Chapman was averaging 8.5 goals a game (he had played one game in the Reserves earlier that year). The best first-year player in the Thirds was awarded to John Murphy, most consistent to Shane Smith, most improved to Peter Marnell, most determined to Wayne Byrne and best clubman to Damien Martin, son of champion of the 1950's, Johnny Martin.

Future Club secretary, Brendan Bailey, commenced as team manager of the Seniors in this season, with Terry Maloney and Tom Bell once again managing the Seconds and Thirds, respectively. Gary Ward coached the Thirds for the third consecutive season. Two Thirds players in Geoff Bell and Bill Newmann both brought up 50 games in that grade during the year, which is unusual, and Newmann and Tony Walsh were both selected to make their senior debuts during the season.

A raid on a Club fundraising venture by the Victorian Licensing, Gaming and Vice Squad in August 1978 had its sequel in court in May the following year when President Sid Wookey, Reserves team manager Terry Maloney and former player Ian "Hucky" Johnston fronted court on charges of selling liquor without a licence. Each received a 12-month good behavior bond (refer newspaper article below). 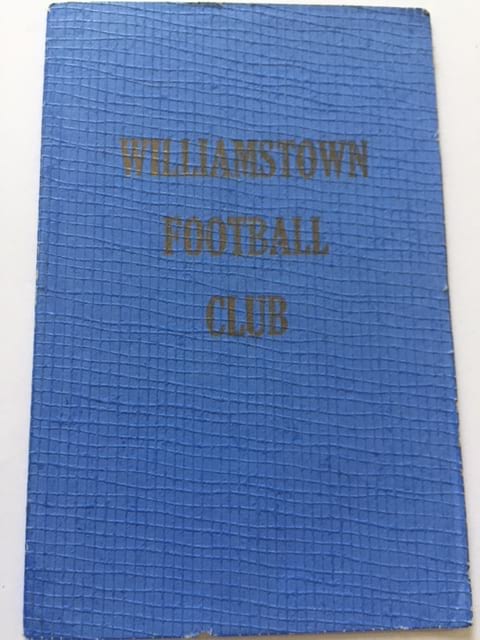 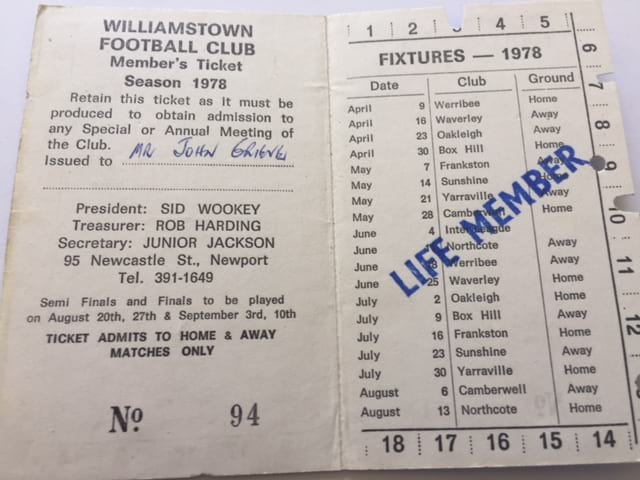 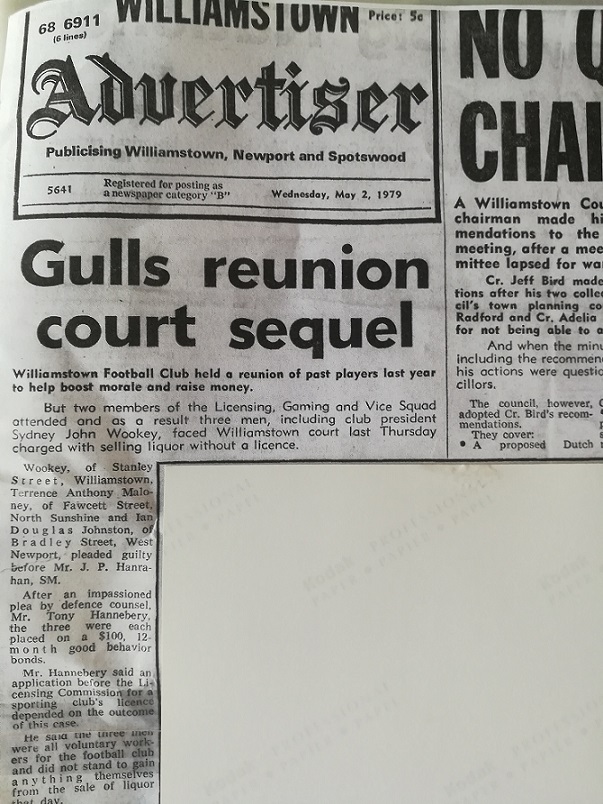 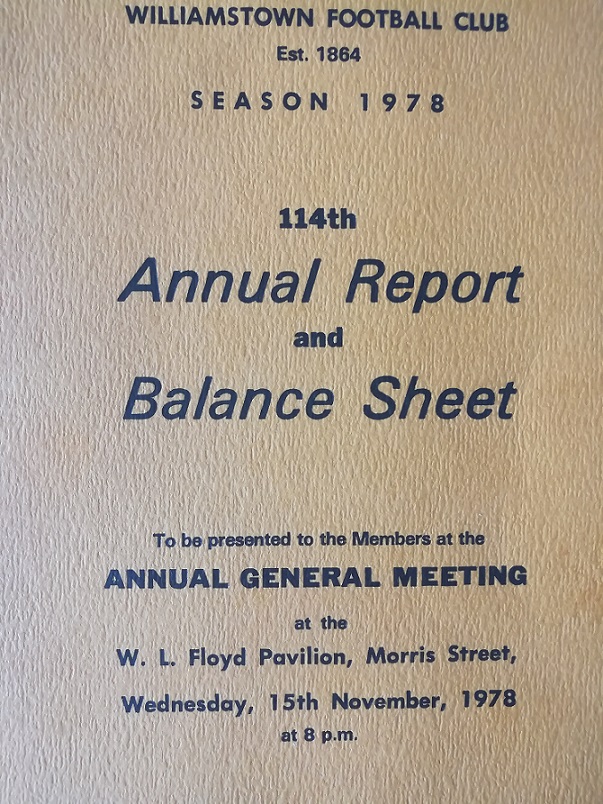 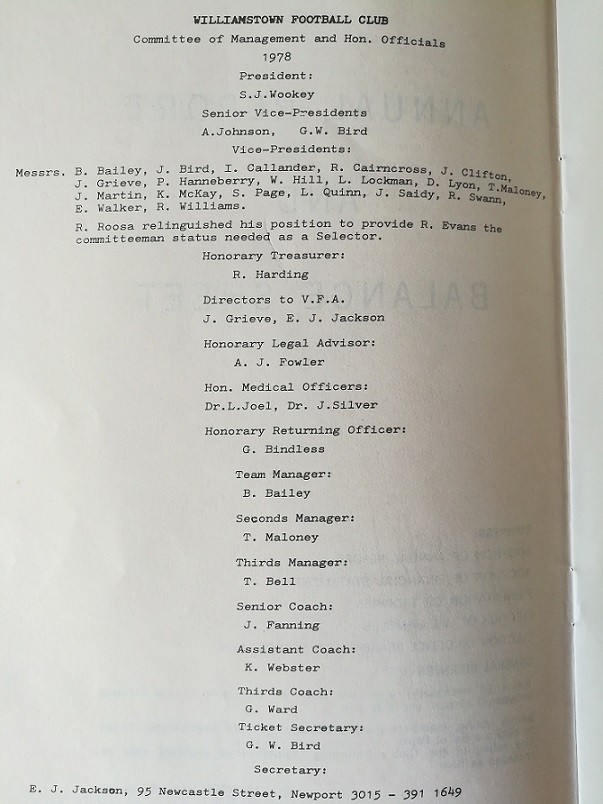 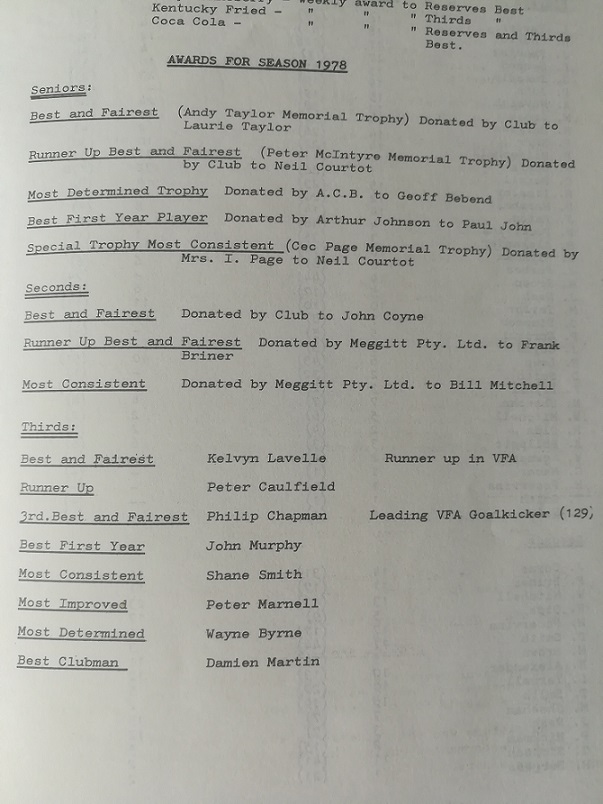 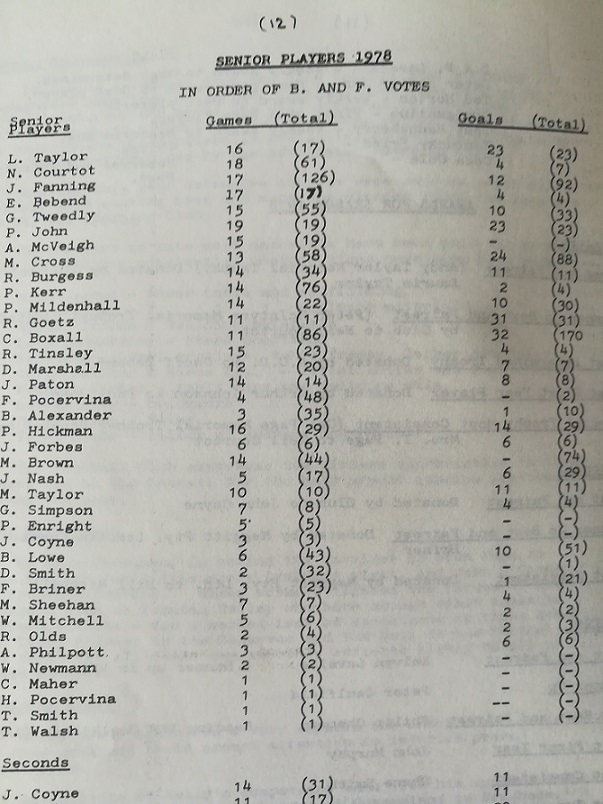