1977 was the centenary year of the VFA, but the return to top flight football was not met with the upmost of confidence due to a lack of finances for the club to acquire new players. A fifth new President in the five years since Arthur Johnson stepped down from the role was appointed in Des Luckhurst, and players from the previous year who departed included Field Medallist Colin Boyd who went to Essendon and played 34 games over the following three seasons. In addition, premiership player Greg Boxall was injured for most of the year and played only five games as did Jeff Scott, while Peter Mildenhall and 'Rocky' Burgess did not play at all.  New players included Bryan Edwards from Albion, Peter Hickman, Tony McVeigh, and John Nash and Rollo Goetz from the Thirds. During the season, a total of 70 players were played in the First and Seconds teams.

Unfortunately, the writing was on the wall very early in the campaign. Despite an encouraging effort in the opening game at Geelong West and then a one-point victory over Prahran at Pt. Gellibrand the following week, relegation was inevitable with the side unable to keep up with the rest of the competition and suffering some huge defeats to eventual premier, Port Melbourne, by 100 points in round 3 (where Collingwood star, John Greening, made his debut for Port), by 79 points to 1976 runners-up Dandenong in round 5, Port again by 63 points in round 12, Sandringham by 59 points in round 16 and Preston by 67 points in round 17. The only other victory was over Caulfield in round 9, but games were narrowly lost to Sandringham by 4 points in round 7, by 5 points to Preston in round 8, by nine points at Prahran in round 11, to Coburg by two points in round 13, to Dandenong by one point in round 14 and to Brunswick by one point in round 15. The Seagulls would finish last with a 2-16 win-loss record and a percentage of 75.9, three wins behind ninth-placed Preston, and were relegated back down to second division.

John Fanning played his 100th senior game during the year, while defender Frank Pocervina was awarded the Andy Taylor Memorial Trophy for the best and fairest player for the season in the seniors. Brian Lowe was runner-up with Peter Gardner in third place. Lowe and Gardner also shared the goalkicking honours for the season with a total of 41. First-year player, John Nash, won the most courageous player trophy. Tony McVeigh won the Reserves best and fairest award with Laurie Taylor in third place. The Seconds, once again coached by Tom Russell, failed to make the finals and the Thirds, undere the coaching of Gary Ward, were beaten by Brunswick on their home ground in the first semi-final. Phil Collins was senior team manager in this season, while Terry Maloney and George Bird looked after the Seconds and Tom Bell the Thirds.

A party of 17 players journeyed to Surfers Paradise for the end-of-season trip.

Life member and committeeman from 1967-77, Cec Page, passed away during the year. Former Club secretary in 1974, committeeman and manager of the Thirds, Les Dooley, also passed away. 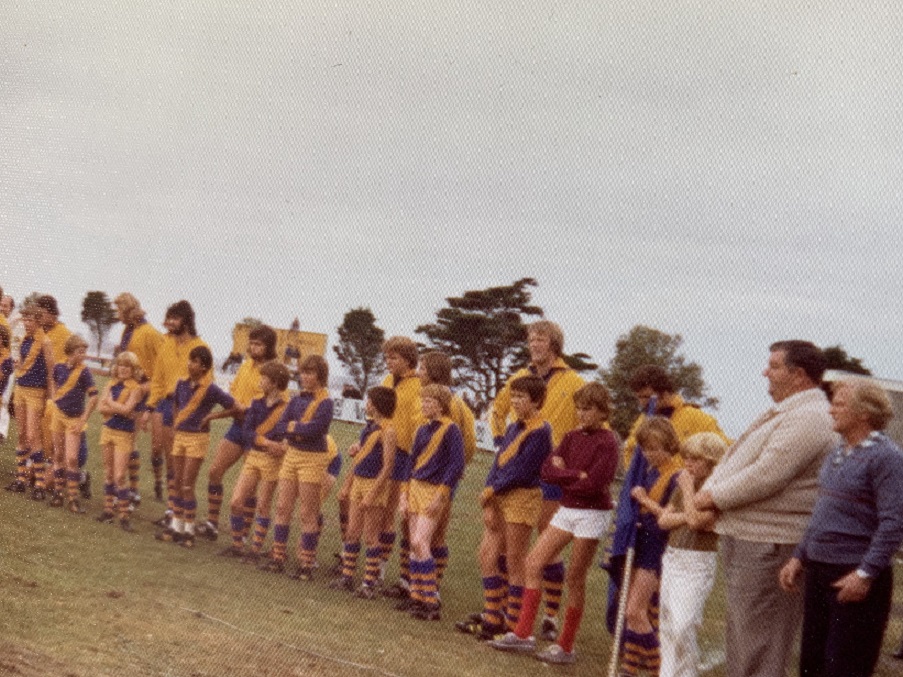 The team lining up at the unfurling of the 1976 premiership flag before the first home game against Prahran on April 10 which Williamstown won by a single point, 17.17.119 to 17.16.118, over a Two Blues team containing former Richmond premiership player, Dick Clay, future four-time Carlton premiership star, Wayne Johnston, and future Fitzroy best and fairest winner, Ross Thornton. Newly-elected President of the Club, Des Luckhurst, is shown second from the right with Treasurer, George Smith, next to him. The first player on the right is captain-coach, Mal Allen, and next to him is John Fanning, Mark Cross, Frank Briner, unknown, Daryl Dixon and Glenn Townsend. 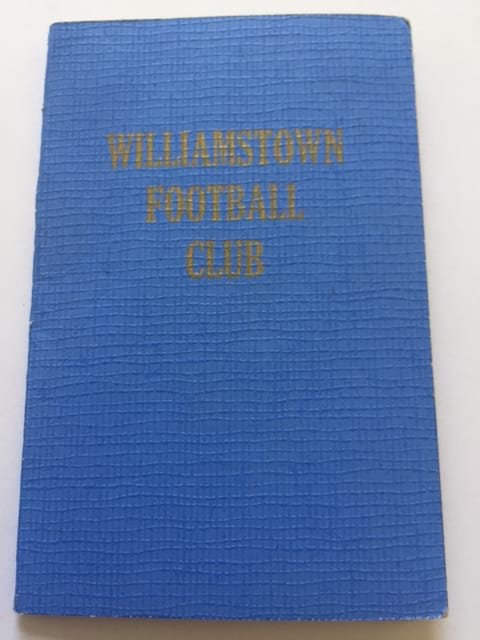 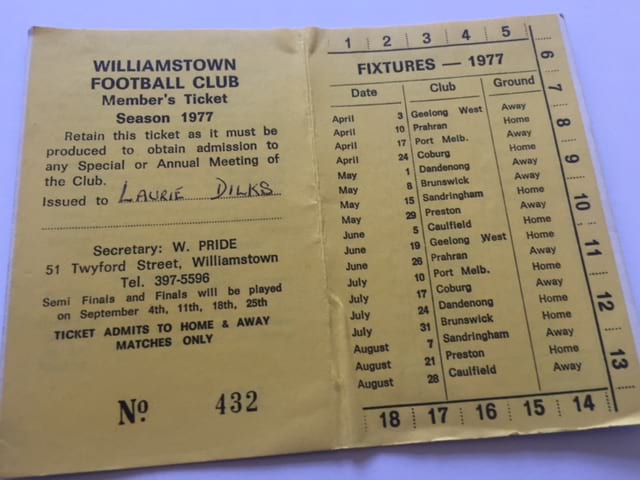 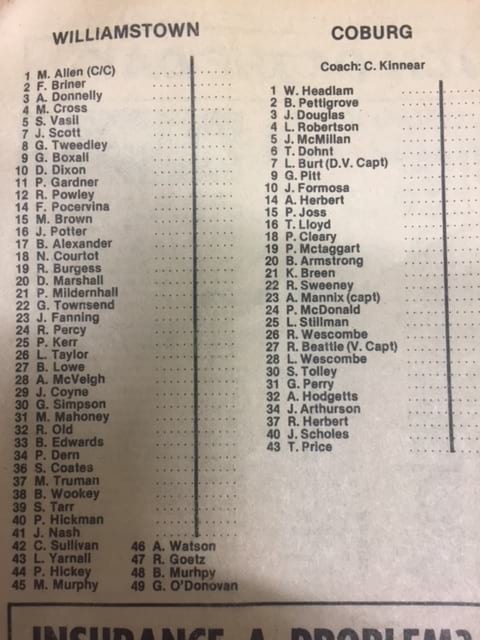 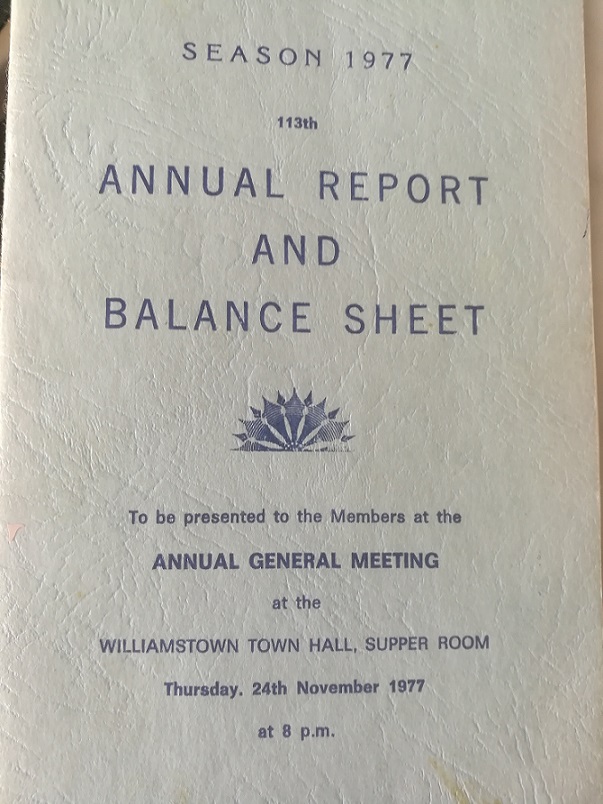 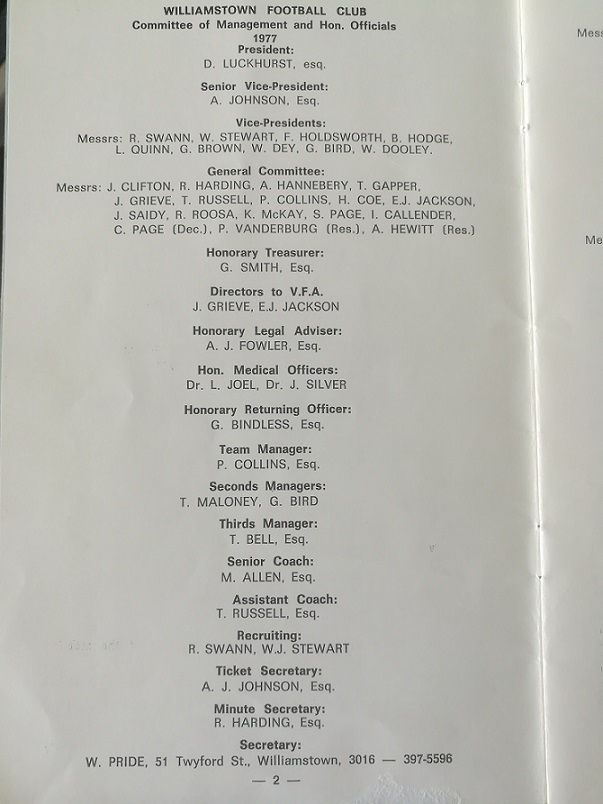 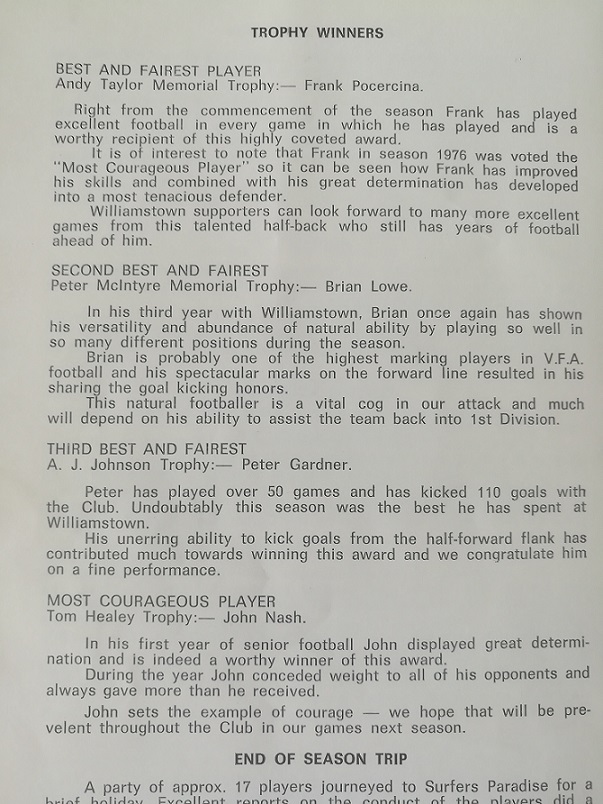 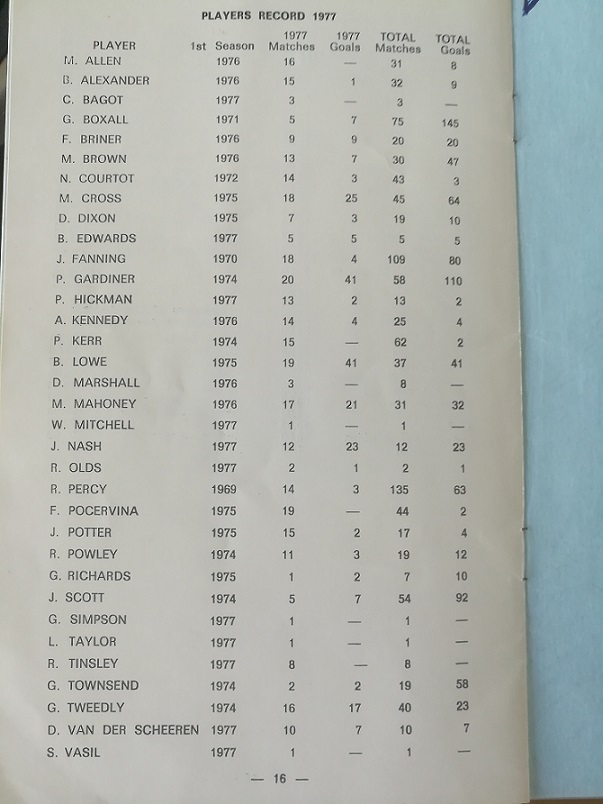