Williamstown found themselves in familiar territory once again in 1976, heading back to the second division of VFA football and with their fifth President in five years, this time Rex Swann who only filled the position for one season due to business commitments. Promotion back to first division the following year would be a daunting task with the prospect of having to knock off Mordialloc and Frankston, who were perceived as much stronger clubs and fancied for the premiership. The season began with Mal Allen, the first Port Melbourne player since Charlie Stanbridge in 1933 to take up the role of captain/coach, being given the reins to steer the club back to division one. In his first season in charge, he suffered a broken wrist, ankle and back injuries compounded with a severe virus, restricting Allen to just 15 games out of the 21 contested by the Club over the course of the season. Former champion full-back, captain and best & fairest winner, Tom Russell, returned to the Club to coach the Seconds and also act as assistant coach to Mal Allen.

The loss of the previous year's best and fairest winner, Michael Kelly, to Footscray after four games of the season and captain Bill Thompson to Dandenong after 67 games with the Club was a major blow to the year's campaign before it could even get underway. Thompson would go on to win the JJ Liston Trophy in 1977. Others to leave were Ron Fenton (74 games, 30 goals) to Spotswood, Tony Hannebery (41 games, 8 goals) who had retired due to business committments in early 1975 but joined the committee and acted as senior runner, Neil Stillman (45 games, 38 goals) and Robert Fox, the leading goalkicker in 1975, who moved to Queensland. Recruits included Rochford 'Rocky' Burgess, Michael Brown from the Footscray District League, Peter Mildenhall, Frank Briner from Port Melbourne, Bruce 'Pickles' Alexander, Alan Kennedy and Mick Mahoney were amongst the 12 new players to make the senior team during the season, 7 of whom played in the final series. Robert Percy returned to the Club after travelling overseas in 1975, was made vice-captain and took out the best and fairest award. Phil Collins was appointed senior team manager.

The season ebbed and flowed for the 'Towners, but got off to a flying start with an 80-point win in the opening round at home against Werribee (Greg Boxall 5 goals), followed by a 60-point victory at Waverley (Boxall 4 goals) and then an 11-goal margin over Yarraville at Pt Gellibrand (Boxall 9 goals) before the first loss at Camberwell in round 4. This was the Cobras first victory over Williamstown since 1952, ending a losing streak of 16 matches over 24 years. The team bounced back to thump Sunshine by 80 points (Michael Brown 10 goals) before going down by just six points at Mordialloc in the season's first real challenge. The Seagulls then knocked off ladder leader Frankston at Williamstown by 51 points in round 7, but then two defeats at the hands of Northcote and Werribee saw 'Town out of the four by round 10. The 4-goal victory at Chirnside Park by the 'Bees was their first win over the Seagulls since admittance to the VFA in their sixth encounter.

Four successive victories over Waverley (Michael Brown 7 goals), Yarraville by 65 points (Brown 5 goals), Camberwell by 55 points (Brown 9 goals) and Sunshine then had the Seagulls back in third position on the ladder before sustaining a crushing 99-point defeat at the hands of Mordialloc at Williamstown in round 15. The Seagulls kicked 18.9.117 but still lost badly, with Peter Neville booting 12 majors for the Bloodhounds. A second defeat followed at Frankston the next week, but the home-and-away season rounded out with big wins at Northcote and at home against Box Hill (Brown and Cross 6 goals each).

While finals participation was never in doubt, the query still remained as to whether Williamstown could knock off their seemingly superior bayside rivals come finals time. The Club finished in third place with 12 wins and six losses for the year and entered the finals as definite underdogs. The first semi-final saw the 'Towners come up against a competitive Northcote at Toorak Park before a crowd of 9,500. In a very high scoring and attacking fixture where the lead changed eight times after the long break, Williamstown were able to sneak past by four points, 16.20.116 to 17.10.112, after trailing by three points at the last change and kicking 3.8 in the last term. Michael Brown and Gary Harley both kicked 5 goals for the Seagulls.

Ladder leaders Frankston were next up, and after losing just one game for the entire year (to Williamstown in round 7), went into the preliminary final as firm favourites. In a free flowing contest, and thanks to some slightly more accurate kicking (including eight goals straight in the last quarter), the Seagulls booked their place into the grand final with a last-gasp two-point win, after being five goals behind at three quarter time and still trailing by 15 points at the start of time-on. Greg Boxall and Mick Mahoney each kicked four goals, but it was a late mark and goal by Mark Cross that sealed the 18.12.120 to 17.16.118 win at Toorak Park in front of a crowd of 8,000 spectators.

Some footage of the game can be seen by clicking on this link:

After two heart-stopping finals, the Seagulls could be excused to come into the grand final against Mordialloc exhausted and overwhelmed at the colossal battle that was ahead of them, especially when Mordialloc won both of the home-and-away contests during the season. The game itself would be the exact opposite, such was the determination of Williamstown to return back to division one. After a tight opening quarter where the Bloodhounds led by nine points at the first break, Williamstown piled on goal after goal while an inaccurate Mordialloc could not go with the Seagulls, with the blue and gold running out 57-point winners in a rugged encounter, 19.13.127 to 9.16.70. Greg Boxall kicked 7 goals but best player was adjudged to be first-year full-back Rochford 'Rocky' Burgess who 'halted attack after attack' according to press reports of the game. The game was played at Toorak Park before a crowd of 10,000.

Some video of the game can be seen by copying and pasting the following link into your internet browser:

To top the season off, reliable defender Colin Boyd was awarded the J. (Jack) Field Medal as the best and fairest player in the VFA second division despite playing several games with a broken thumb, but was runner-up to Robert Percy in the Andy Taylor Memorial Trophy for Club best and fairest. Percy had returned to the Club after being out of football in 1975 holidaying overseas. Peter Kerr finished third in the voting, despite missing many games with a serious groin injury. First-year player Michael Brown took out the goalkicking award with a total of 67, and finished equal fifth on the Second Division list. Frank Pocervina won the most courageous player award.

The Reserves, under the coaching of former 200-game senior player Tom Russell and with George Bird and Terry Maloney as team managers, finished sixth on the ladder and the Thirds, coached by Gary and Daryl Ward and managed by Les Dooley, finished fifth, winning ten games and, due to numerous suspensions, were just one game out of the final four. 29 players were tried in the Thirds in this season. Future senior players, John Nash and Roland Goetz kicked 63 goals and 53 goals, respectively, to finish high up on the goalkicking list of the VFA Thirds competition. Goetz also finished fourth in the competition best and fairest award, while Laurie Taylor won the Club best and fairest in the Thirds. Bruce Wookey was awarded the Reserves best and fairest. The Fourths team was disbanded before the commencement of the season following a reorganisation of local football, whereby Williamstown Juniors merged with Williamstown United to cover every age group up to seniors, thereby reducing drastically the number of players that used to flow from the under 14's onto the Fourths.

A total of 34 players gained senior selection during the season, and 69 players were played in the Firsts and Seconds over the course of the year. A large group of players and a few officials journeyed to Surfers Paradise for the end-of-season trip.

First rover in Williamstown's 1921 premiership team and second rover in the losing 1924 grand final team, Norm McDonald, passed away in Footscray on 31 January 1976 at the age of 77. He played 106 games and kicked 148 goals with 'Town from 1919 until round 6 of 1925, after being recruited from Yarraville, and from 1929-30 as well as playing a handful of games in 1931 and 1932 when the team was short of players. He transferred to Footscray during 1925 and was in the senior team by round 7. He played only the first six games with Williamstown in 1925 but topped the goalkicking with a total of 13. McDonald played 51 games and kicked 67 goals from 1925-28 with the Bulldogs before returning to 'Town in 1929 as vice-captain. He later coached Newport Juniors in 1934 and was non-playing coach of Williamstown Seconds from 1937-40.

1924 captain-coach, Fred Carpenter, was another who passed away in 1976 on March 14 at Port Melbourne, aged 83. He first played for Williamstown in 1907 as a 15yo before later embarking on a career with South Melbourne from 1910-13 and then 1919-20 which was interrupted by service in World War I. He returned to Williamstown during 1920, played in the 1921 premiership team and coached the Villagers to the 1924 grand final and was a teammate of Norm McDonald's in both games. He was the Club leading goalkicker in 1923 with 63 which equalled the Club record set two years earlier by Jim McAuliffe and gave him second place on the VFA goalkicking list. He topped the Club goalkicking again in 1924 with 35 in his final season with the Villagers, for whom he played 108 games and kicked 235 goals. After purchasing a business in Port Melbourne he transferred there as captain-coach in 1925 and played until the end of 1929, by which time he was the oldest player in the VFA at age 37. 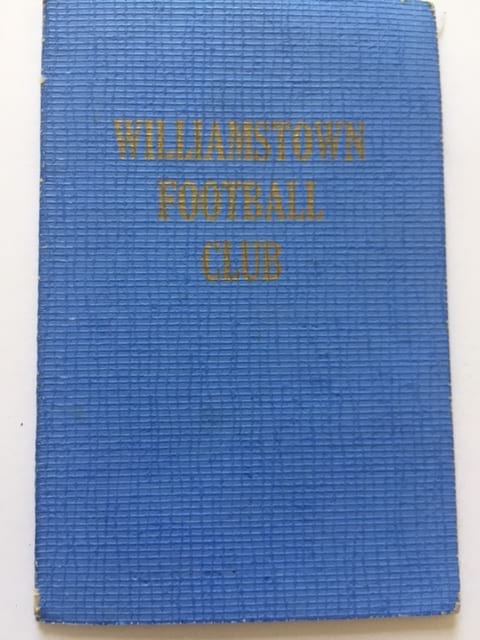 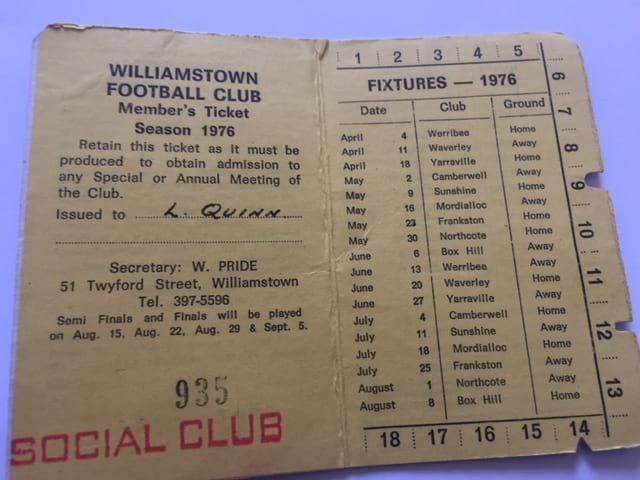 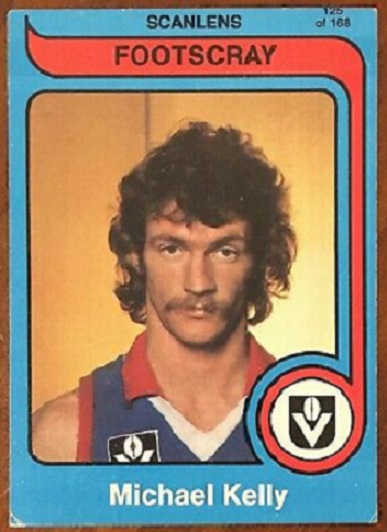 1975 best and fairest winner, Mick Kelly, crossed to Footscray after the first four games of the 1976 season, where he would go on to play 57 games and kick 18 goals up until the end of 1980. Originally from Braybrook and Deer Park, Kelly returned to Williamstown as deputy vice-captain in 1981 and played a total of 49 games for the Seagulls and booted 59 goals up until the end of 1982. 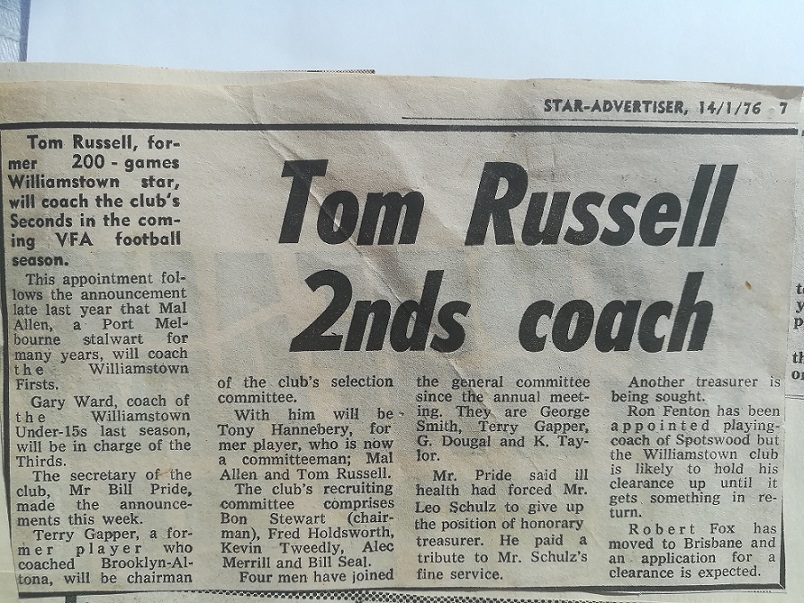 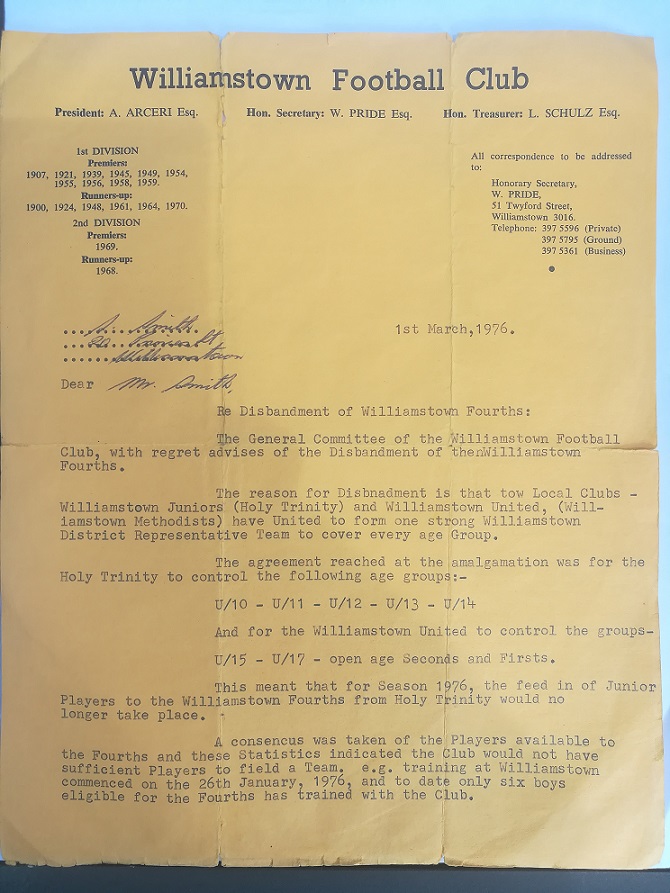 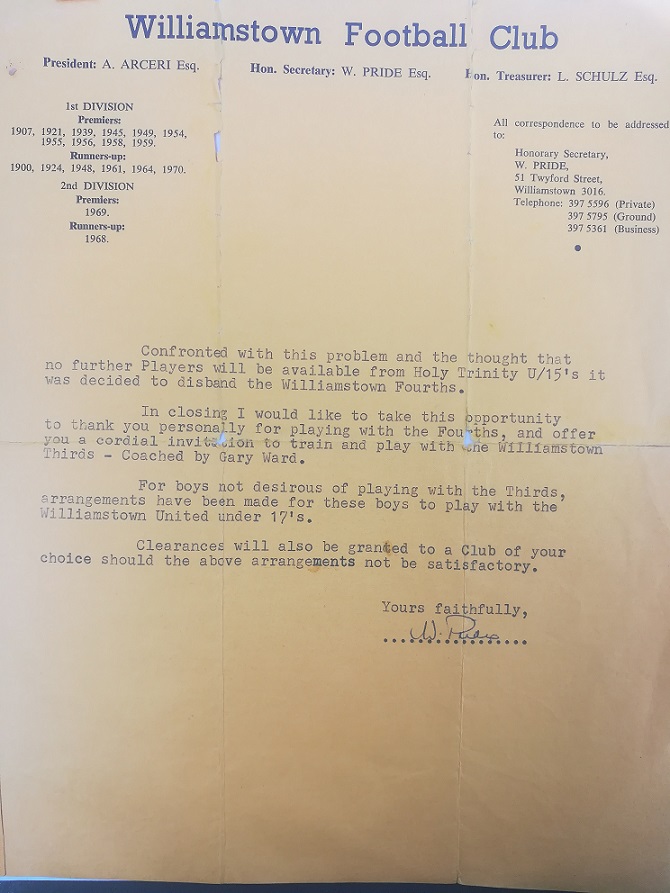 The Williamstown Fourths were disbanded in 1976 due to lack of players after winning three consecutive premierships in 1972-74 in the Western Suburbs Football League. 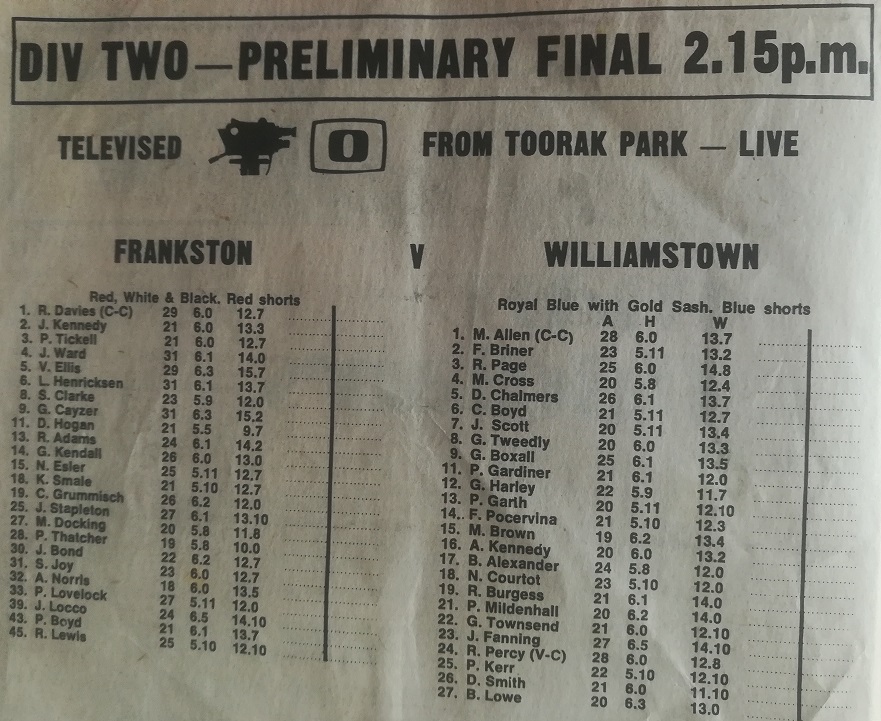 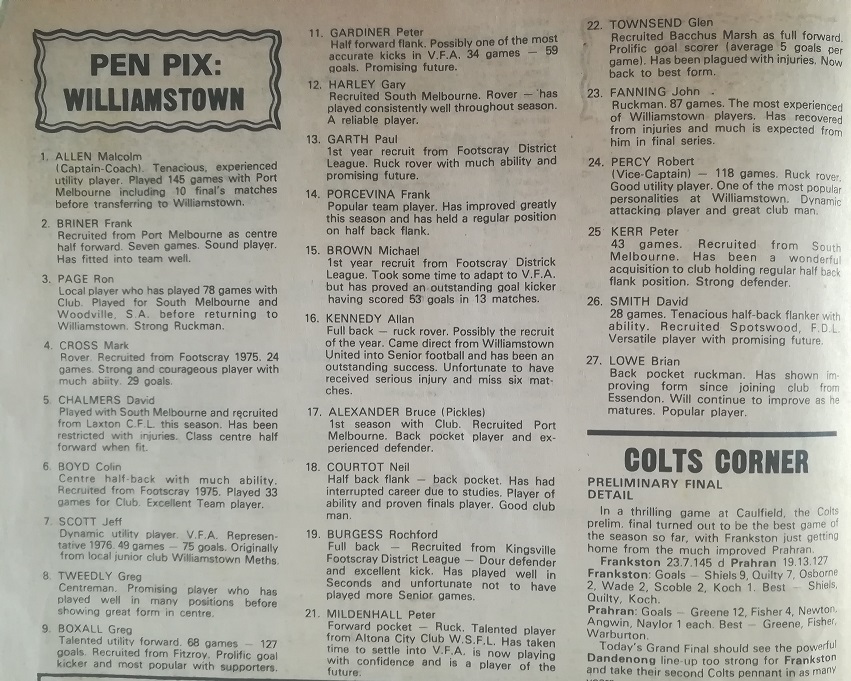 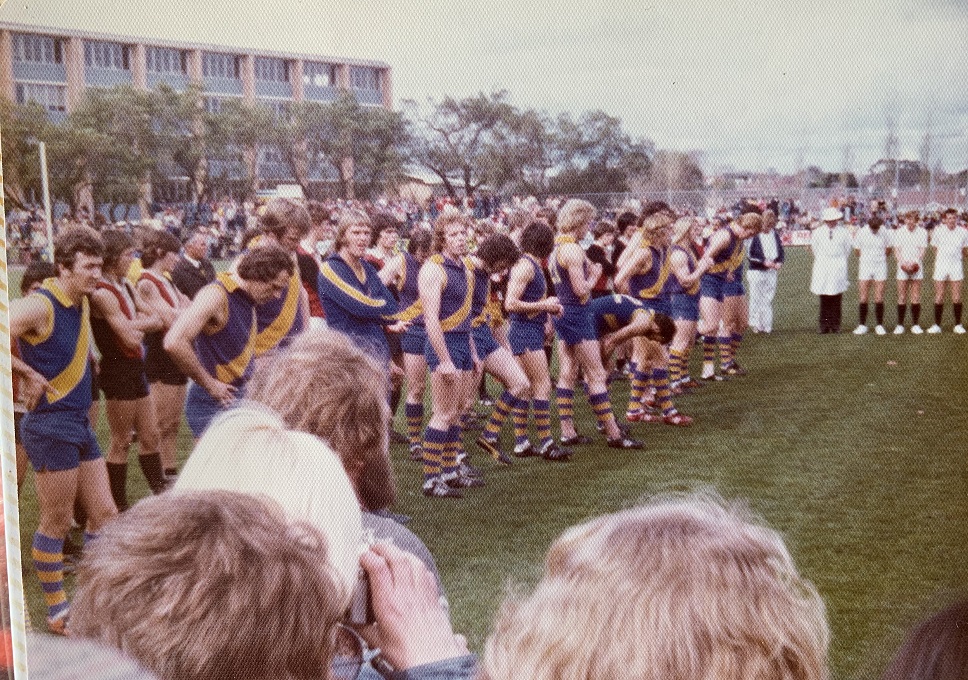 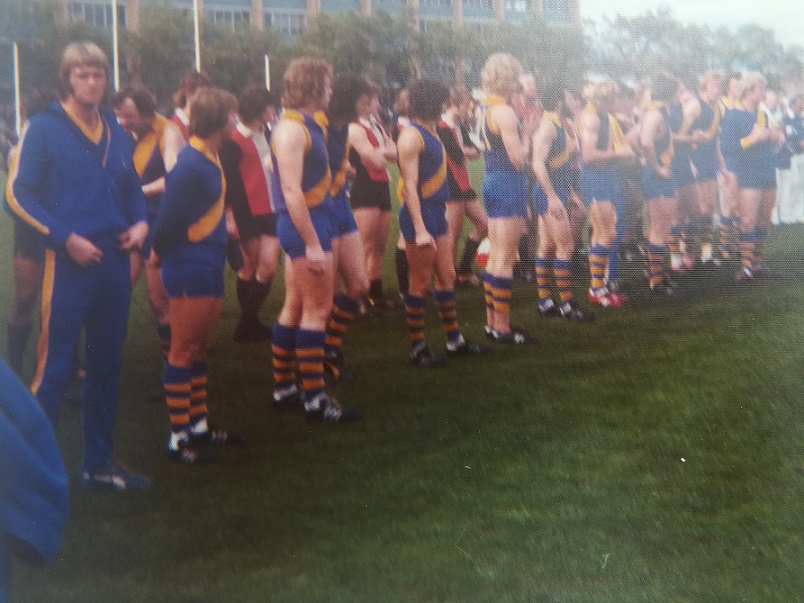 Williamstown players line up before the preliminary final against Frankston 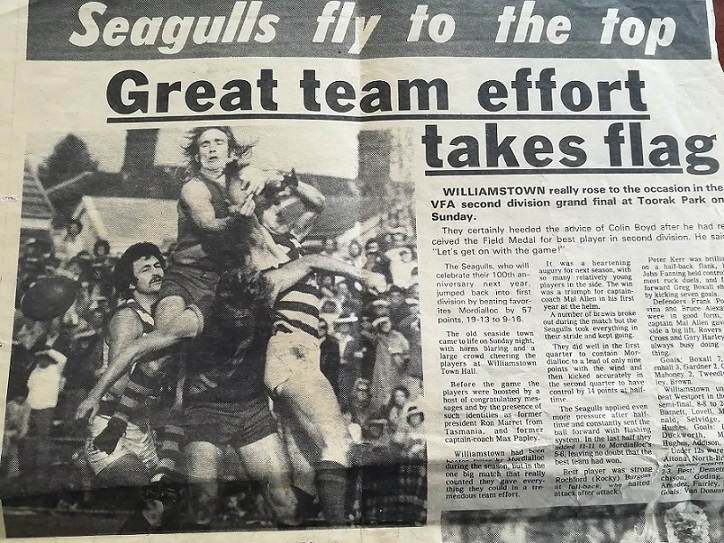 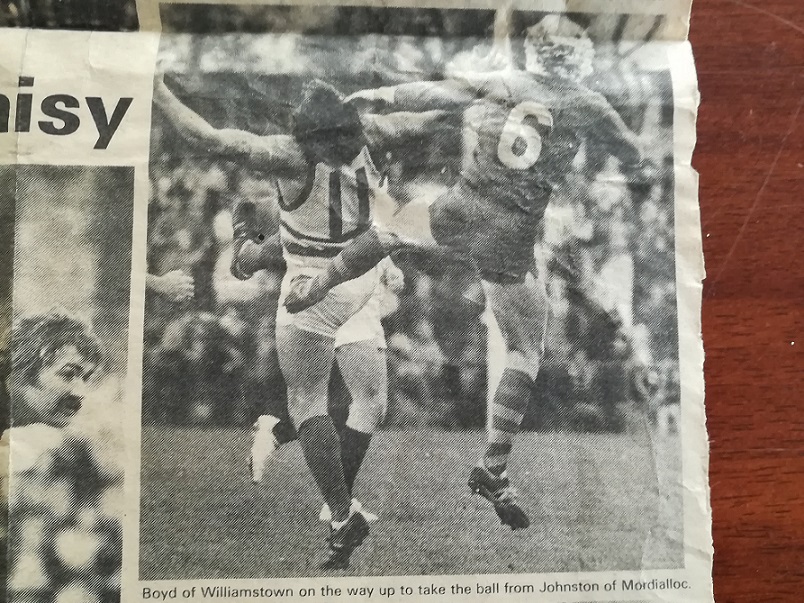 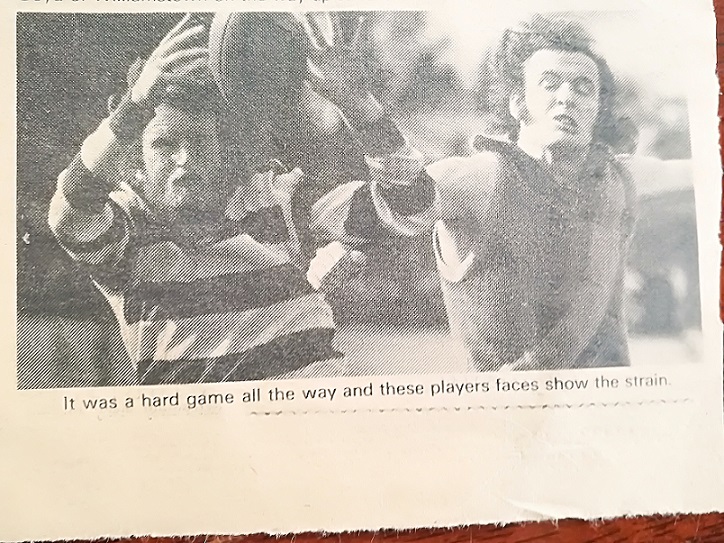 Greg Tweedly in a contest for the ball 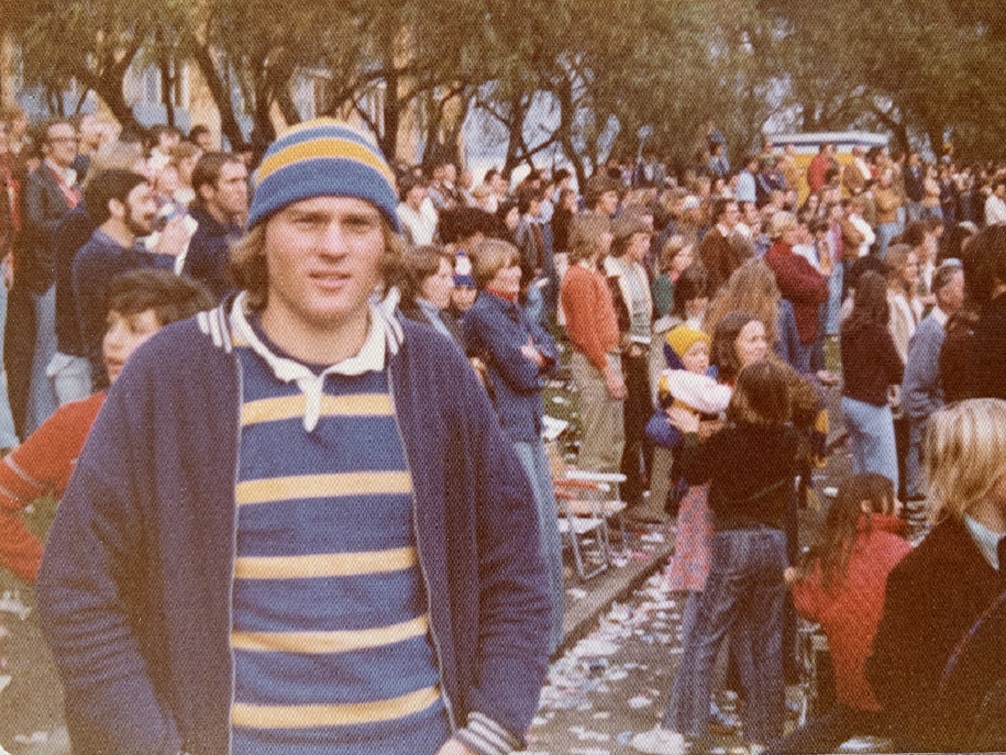 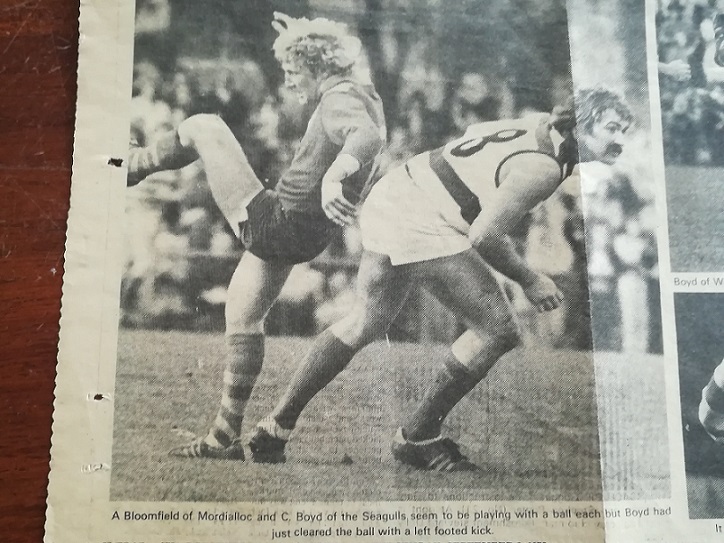 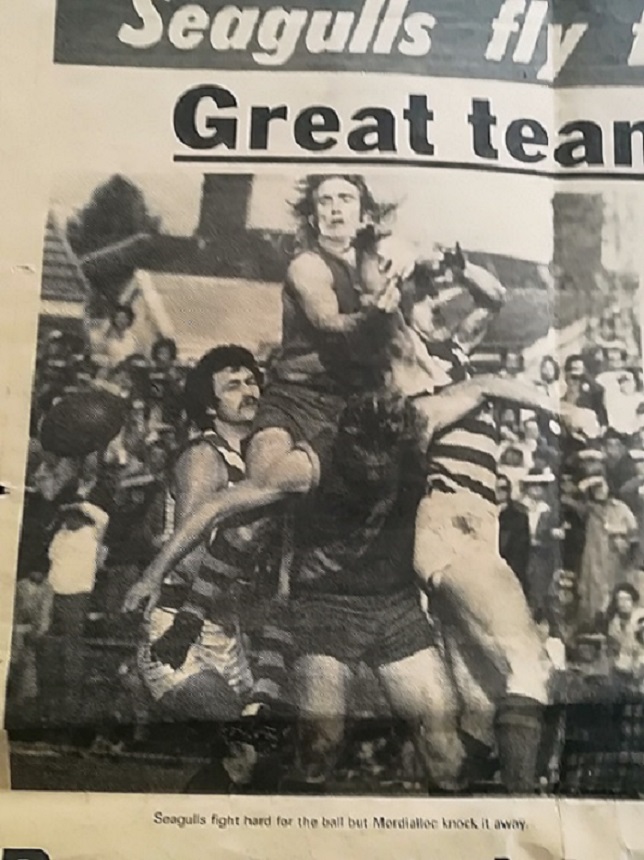 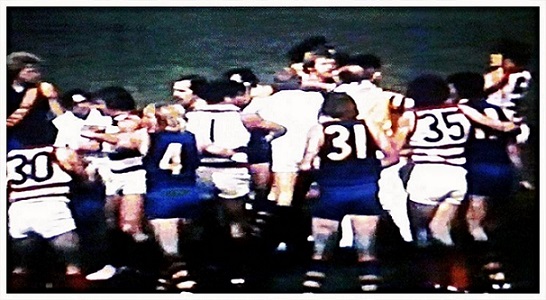 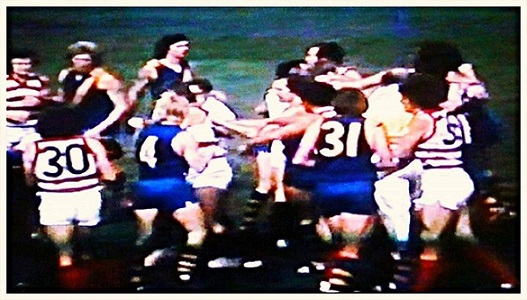 Some action from the 1976 Grand Final at Toorak Park 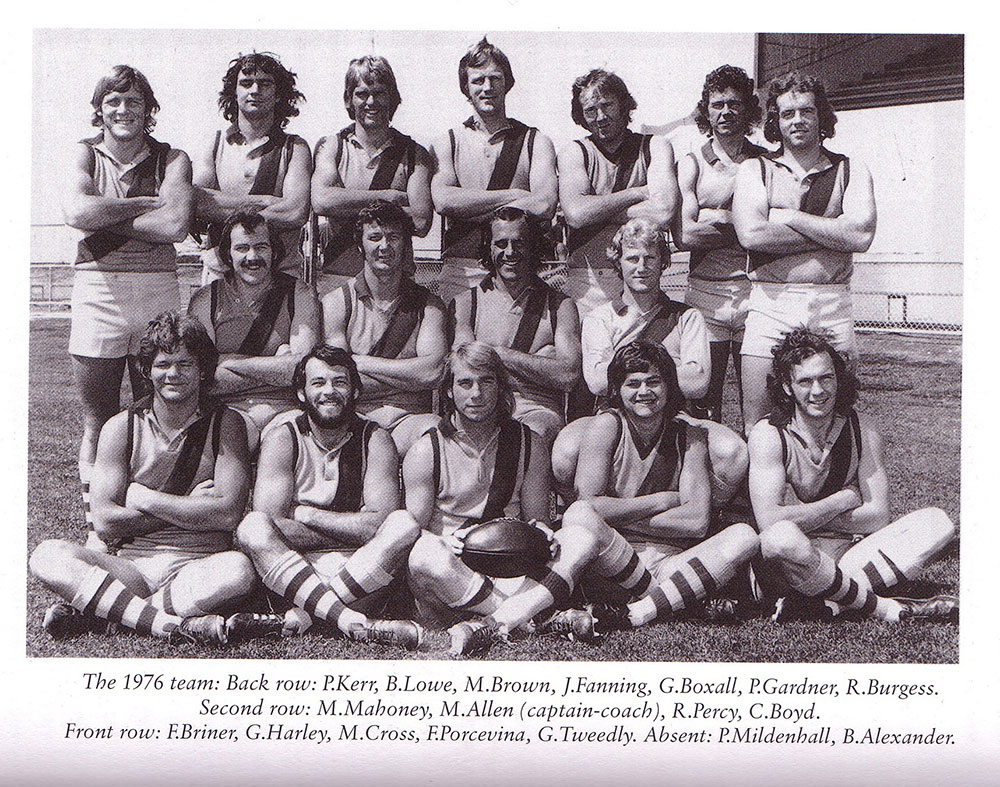 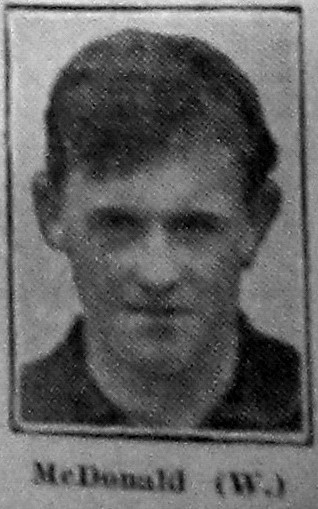 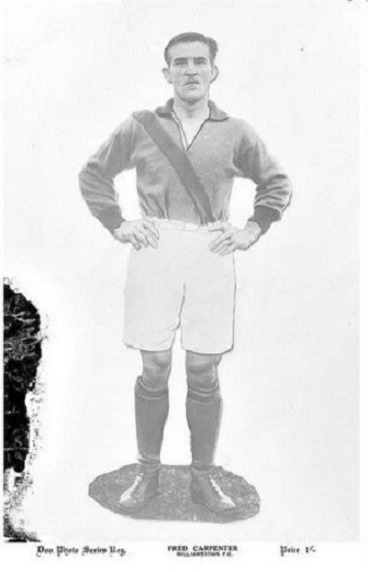 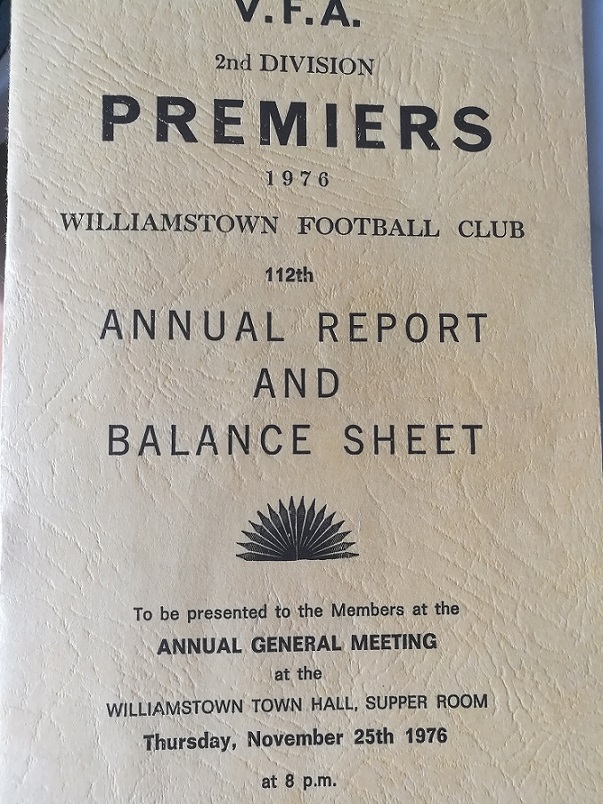 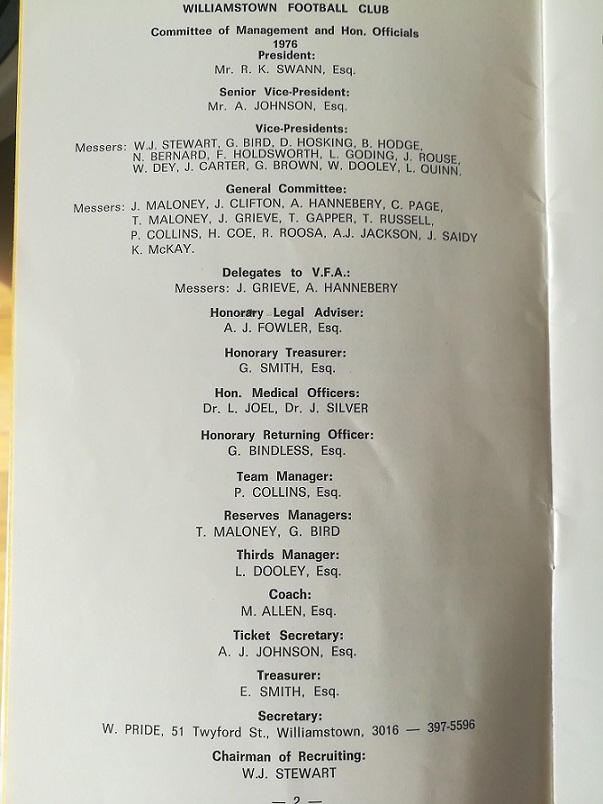 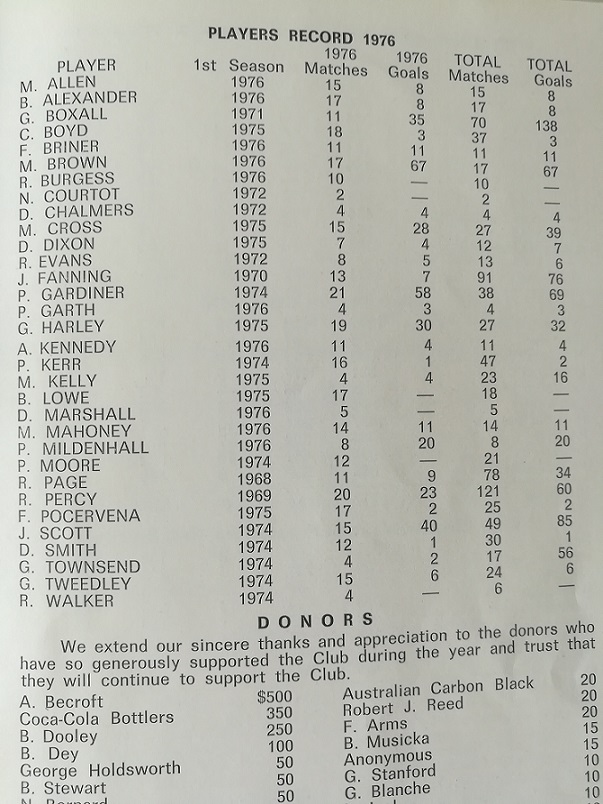 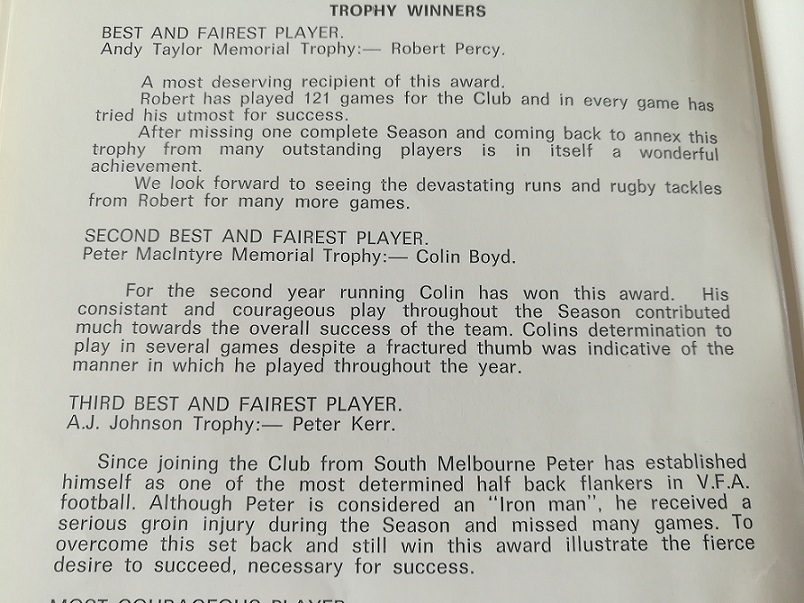