A transformation in the Club's leadership due to the departure of Max Papley now saw ex-Carlton player Barry Gill take on the role of captain/coach for the next two seasons. Gill had played 132 games for the Blues, including the 1968 and 1970 premierships. The Club also had a new President, with 1949 premiership player and local real estate agent, Norm Bernard, taking over the role from Arthur Johnson, who became Senior Vice-President.

The Club faced a battle to be competitive in the 1973 season after commencing the season with three consecutive defeats, two being at home. A breakthrough two-point win at Coburg in round 4 was followed by a loss at Geelong West and, midway through the year, relegation to division two was yet again a real possibility. However, a string of four consecutive victories in rounds 12-15 against eventual premier Prahran (Greg Boxall 6 goals), Coburg (Boxhall 6 again), Geelong West (Les Stillman 5 goals) and Preston (Boxall 5 goals) ensured that this would not be the case. In fact, after the seven-goal win at Preston in round 15, Williamstown were only one game out of the four. A heart-breaking four-point loss at Port Melbourne the next week, after being 26 points up at the last change, put the finals out of reach and the Seagulls would finish in sixth position with an 8-10 win-loss record, 10 points and percentage out of the final four. In fact the team beat Sunshine by 7 points the next week at Williamstown and then lost by 6 points at Dandenong in the final home-and-away game. The Reserves won a similar amount of games as the Seniors and missed the finals, whereas the Thirds (under 19's) under 1969 premiership ruckman Ken Barnes failed to win a game and struggled to even field a team on occasions.

The stellar form of Les Stillman was a significant factor in the Club's ability to compete throughout the season, where he took out back-to-back best and fairests, winning from Tony Hannebery and captain-coach Gill, who missed five games with broken ribs on two occasions during the year. Stillman also won the Club goal kicking award for the season with a total of 37 and ran third in the JJ Liston Trophy behind winner Ray Shaw of Preston and Ricky Browne of Geelong West. Robert Scott was awarded the Reserves best and fairest player, with the team once again being managed by Joe Rouse and Terry Maloney. Assistant Club secretary, George Smith, managed the Thirds.

Rodney Walker took out the Thirds award while John Dean was adjudged best in the Fourths (now under 17's). They brought a second successive pennant to Pt Gellibrand under the coaching of John Raffle. In two seasons the Fourths had suffered only one defeat in winning dual premierships.

A small group of players and officials journeyed to Coolangatta for the end-of-season trip.

On 12 May, 1973, defender in Williamstown's first premiership team in 1907, Bert Reitman, passed away suddenly at his Williamstown home at the age of 85. Reitman had transferred to Williamstown in that year after 12 senior VFL games with Collingwood in 1906-07 and went on to play 126 games with the Villagers from 1907-14. He was captain-coach in 1913 and captain in 1914, and received life membership in 1915 after retiring. 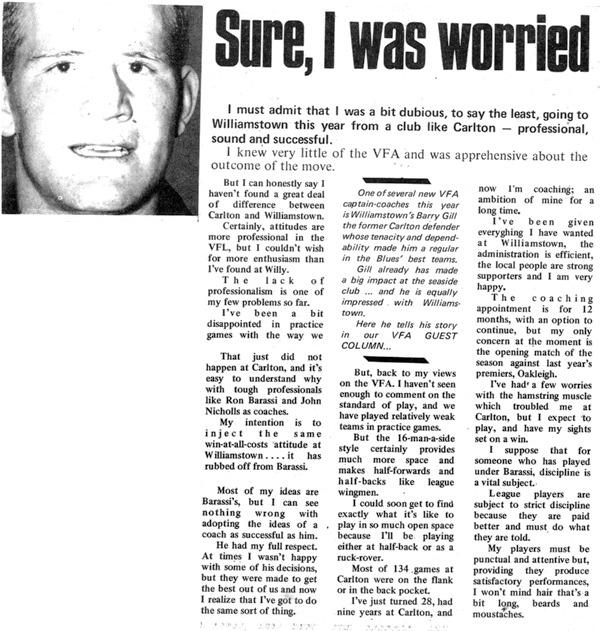 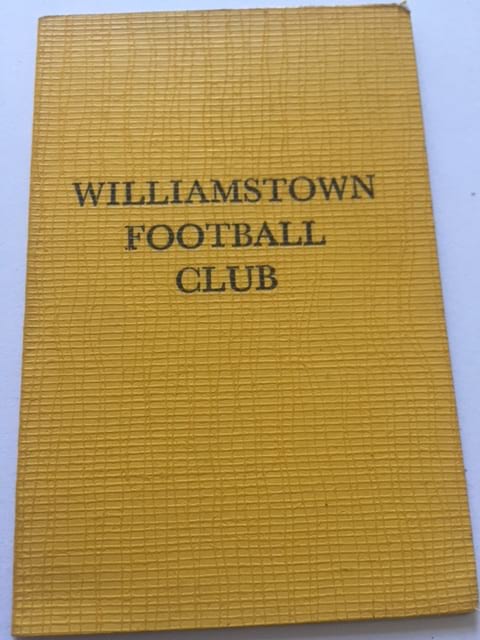 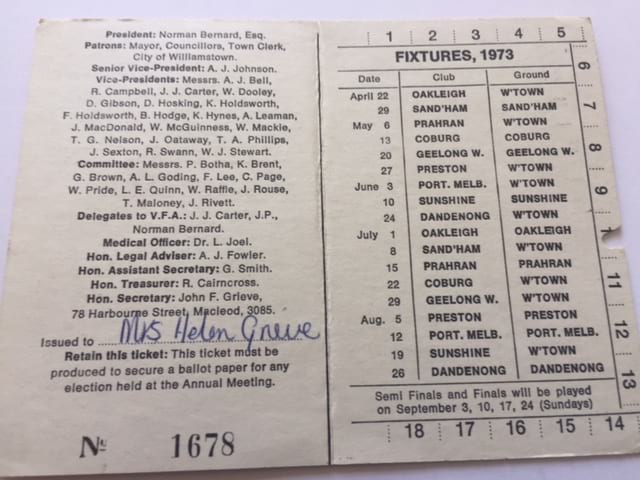 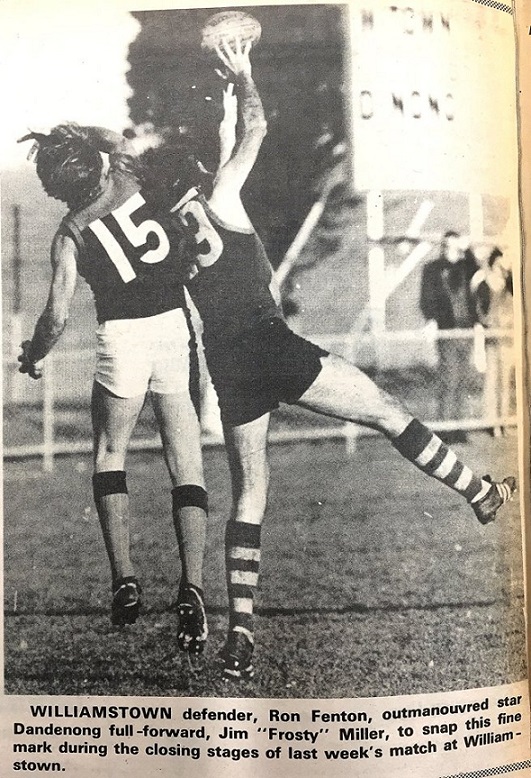 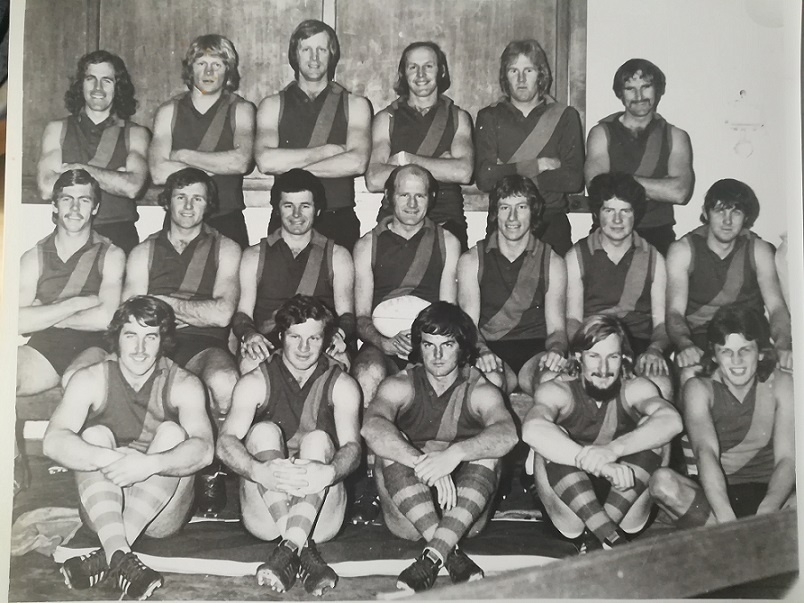 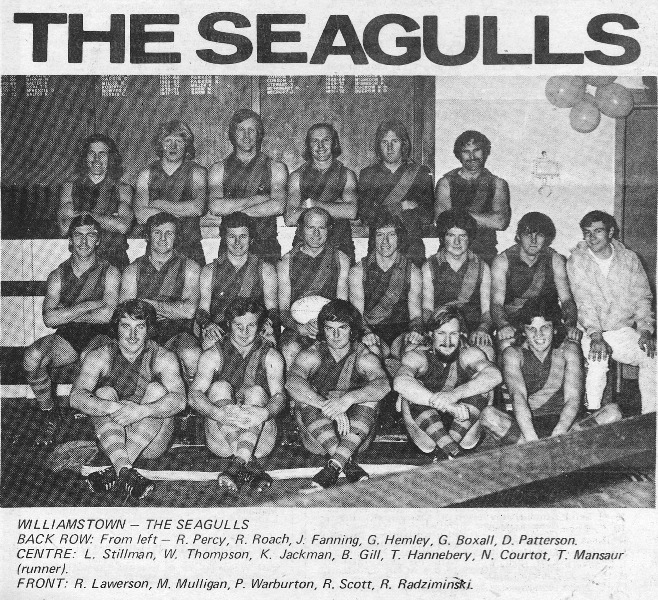 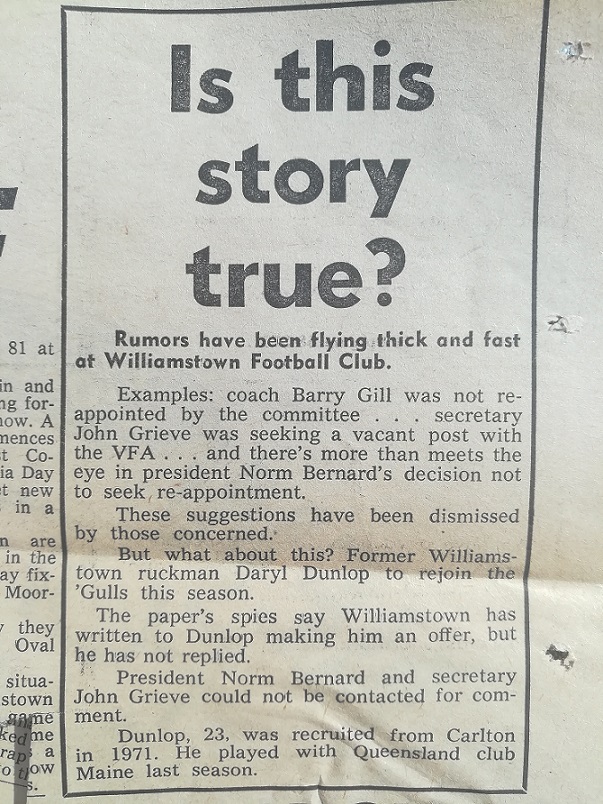 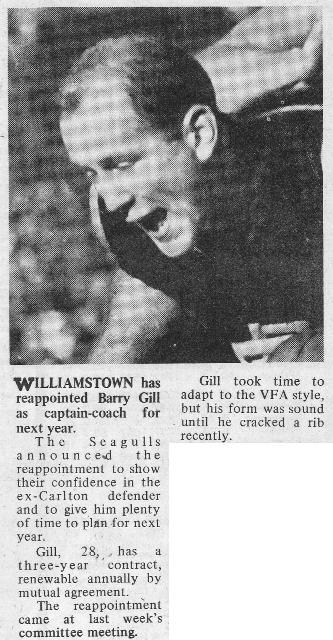 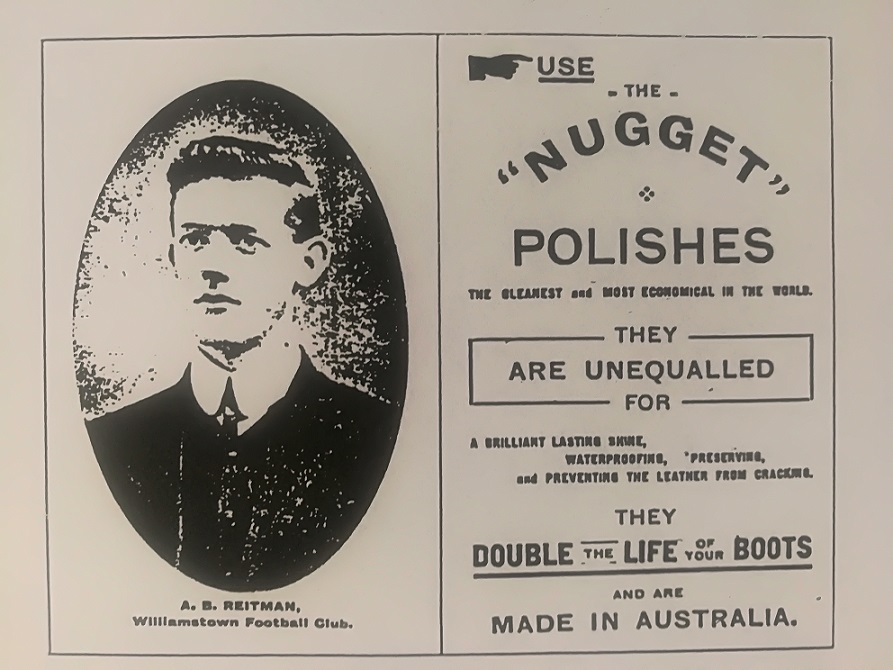 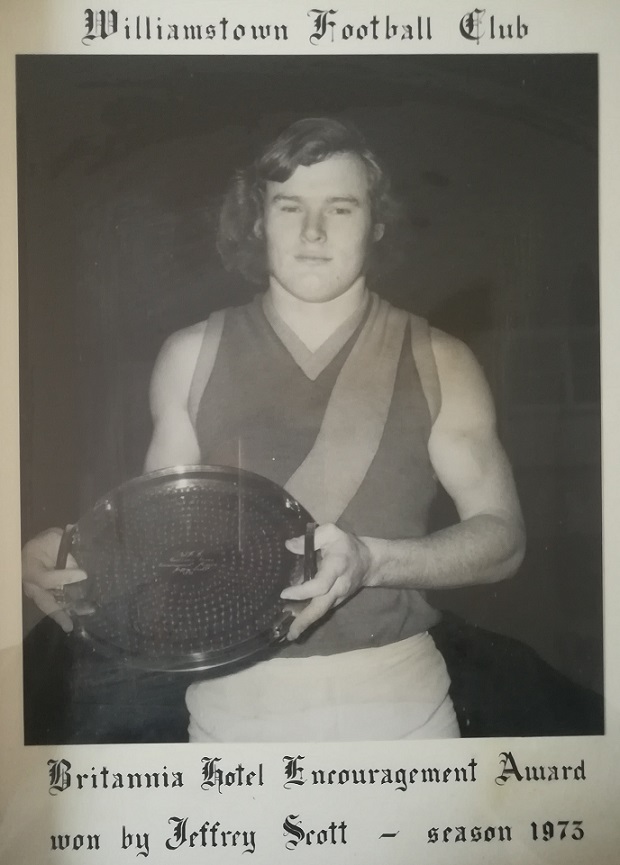 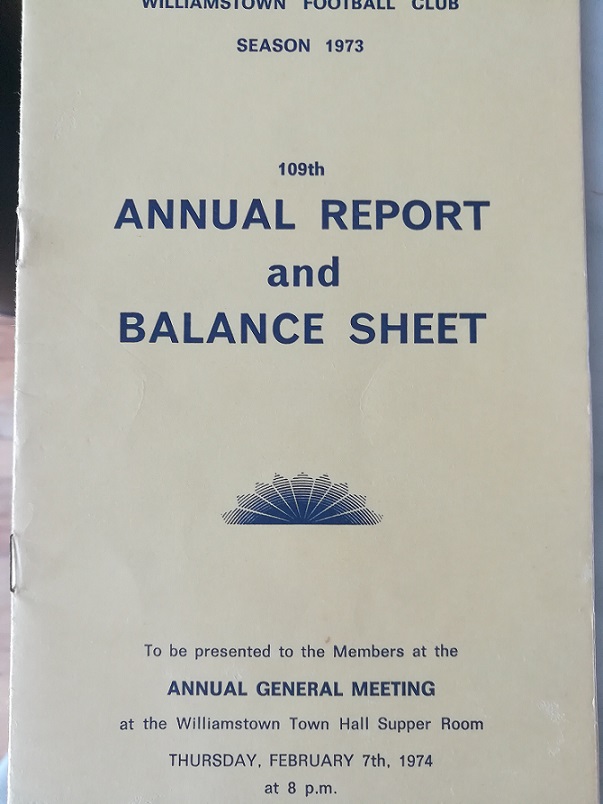 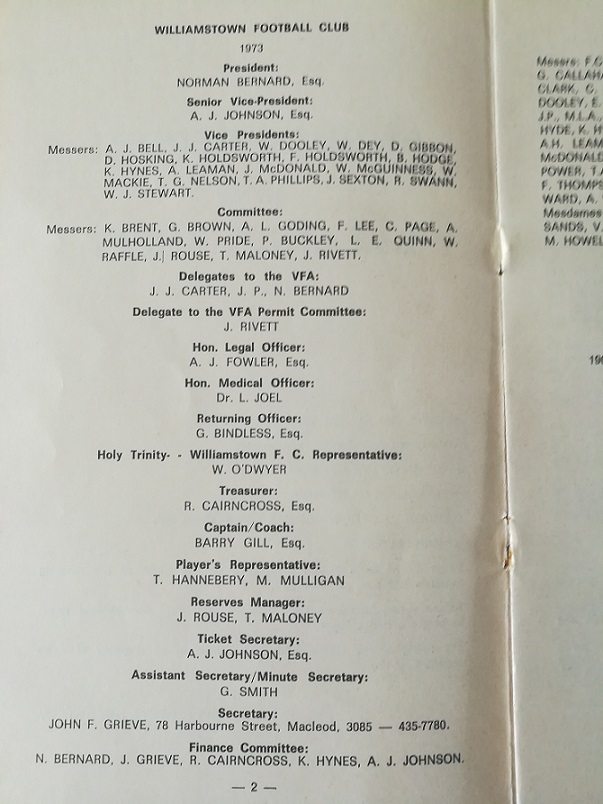 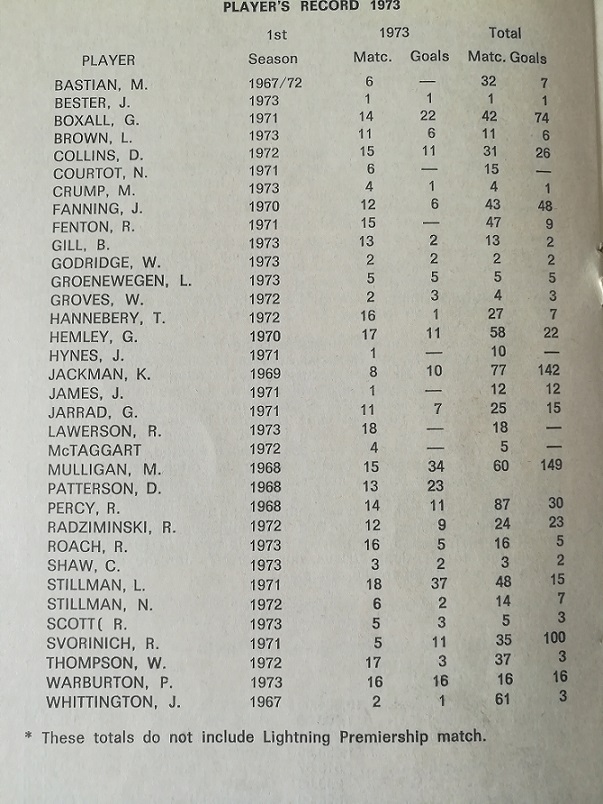 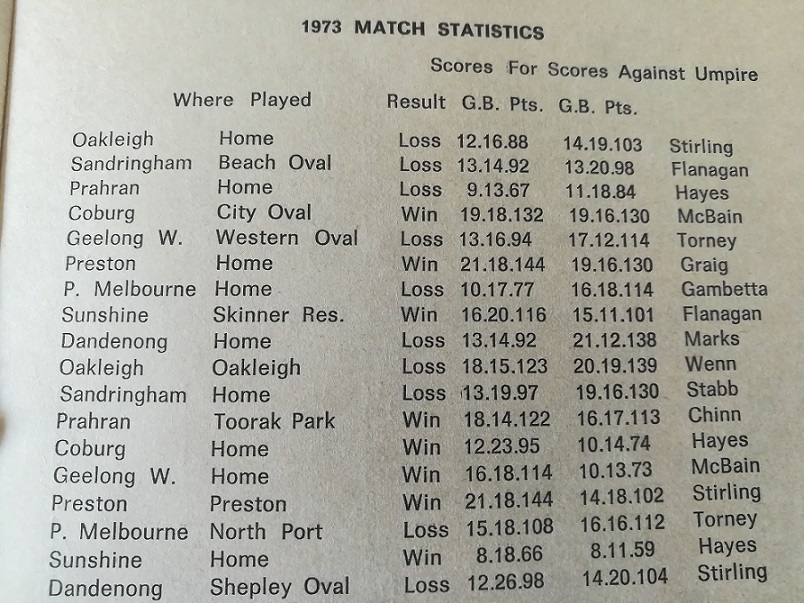 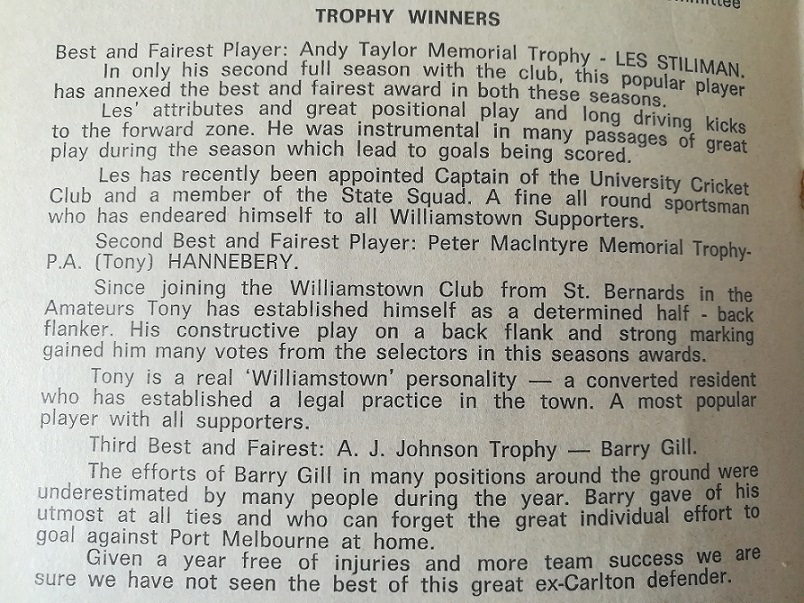