After the promising previous season, the Club was dealt a major blow with captain/coach Max Papley deciding to call time on his illustrious playing career due to persistent hamstring problems. However, he stayed on as head coach and he did return to the playing field in 1972 for a further nine games in royal blue and gold. Future captain and State cricketer Les Stillman joined Williamstown in 1971 from Footscray, along with Bob Svorinich from South Melbourne. Greg Boxall began his long career with the Seagulls in this season after playing with Carlton Seconds and Thirds from 1967-70, as did Neil Courtot (promoted from the Thirds) and Ron Fenton (Footscray).

With new captain Ken Barnes at the helm, the 'Towners ambition to make a charge at another premiership unfortunately never came to fruition, mainly due to the loss of key players to injuries mid-season and the loss of 19 players who played with the seniors in 1970 through retirements and transfers. This included Papley, Alan Byers, Bill Mitchell, Paul Hayward, Graeme Buchanan, Andy Camilleri, John Fanning, Gary Fitch, Bob Smith, Ron Page and Dallas Patterson, who sued the President and Secretary during the year but returned to play in 1973. As a result, the Seagulls won just six games and narrowly avoided relegation to the second division by a percentage of just 3.4%. Geelong West finished on the same number of points but with a percentage of 87.2 to Williamstown's 90.6, thanks to the Seagulls kicking 19.12 in the final home-and-away game against Oakleigh. The team was in fifth position after six rounds but floated between seventh and eighth for a majority of the year before finishing ninth.

On a more positive note, several players who commenced the season in the Thirds were promoted to Senior ranks, including future captain and best & fairest winner, Neil Courtot, Jim Hynes, who won the Fourths best & fairest the previous season, and Graeme Jarrad, who played in the Thirds premiership team of 1969. A further nine Thirds players played regular games with the Seconds.

The Seagulls finished in ninth place on the ladder, with a 6-12 record. Four of these victories came in the first half of the season at Sandringham in round 2 (Mick Mulligan 5 goals), and at home against Preston, Geelong West and Oakleigh (Greg Boxall and Bob Svorinich 5 goals each) in rounds 5, 6 and 9, respectively.  The two other victories were against Port Melbourne in round 12 and Geelong West in round 15.

Brian Harvey took out the Andy Taylor Memorial Trophy for best and fairest from Bob Svorinich and Les Stillman. Svorinich was also the Club's leading goalkicker with a total of 44. The most improved player was awarded to another first-year recruit from Carlton Seconds, Daryl Dunlop, while John James took out the best clubman trophy.

John James and Graham Salter tied for the Reserves best and fairest, with Graeme Jarrad in third place. The team was coached by senior assistant coach, Norm Alvin, and managed by assistant secretary, John Wright, with assistance from vice-president, Des Hosking. The highlight of the season was defeating the eventual premier, Oakleigh.

Ron Gordon won the Thirds best and fairest award and Graham Dean the Fourths. The Thirds, under coach Alex Merrill, took out the premiership in that grade in 1971. Doug Nicholson was again president, John Grieve secretary and Dean Humphries treasurer. John Raffle again coached the Fourths, which were unfortunate to miss out on the finals after being beaten by the top team in the last home-and-away game by the last kick of the day to leave them in fifth position. Doug Nicholson also acted as president for the Fourths.

During the season, full-back Tommy Russell, in his final year, played his 200th and last senior game for Williamstown in the round 17 clash with Dandenong at Pt Gellibrand, making him only the second player after Ray Smith to achieve that milestone in the long history of the Club. Unfortunately the Seagulls went down by 25 points, 20.15.135-15.20.110 (Boxall 5 goals, Svoronich 4) in the Redlegs first-ever victory at Williamstown.

Kelly Brent became head trainer in this season, taking over from Bob Major who had occupied that role since 1952.

During the year, life member and former committeeman in 1960 and from 1967-70, Bernie Marks, passed away. Bernie was also minute secretary from 1961-66. Other life members who passed away in 1971 were George Flett, committeeman from 1940-59, Dave Barty, who played 45 games and kicked 21 goals from 1899-1902 and received his life membership in 1904, and Mrs Virtue Sheahan, mother of 1949 premiership star, Bill Sheahan, grandmother of another life member, statistician Kathy Sheahan, and great grandmother of AFLW footballer and Australian cricketer, Jess Duffin, who also won the Lambert-Pearce Medal as the best player in the VFLW during her one season with Williamstown in 2018. Two young first-year players in Eric Girardi and Andrew Briggs also passed away during the season. Girardi played one game during the year.

Twenty-six players and officials journeyed to Sydney for an end-of-season trip. 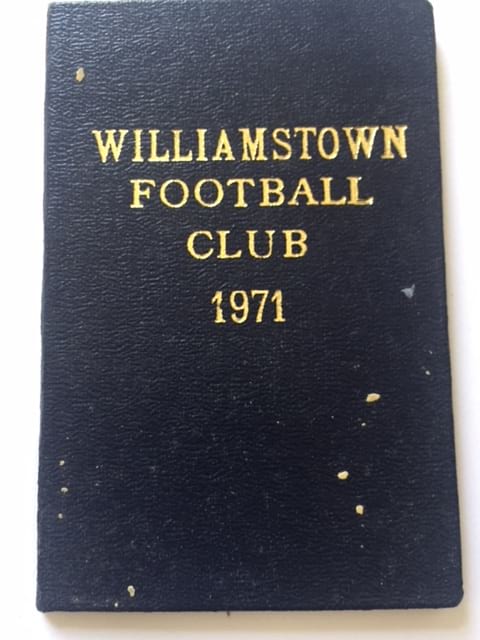 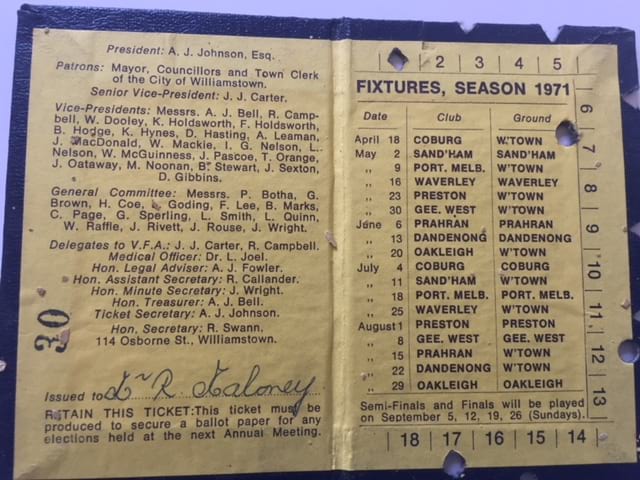 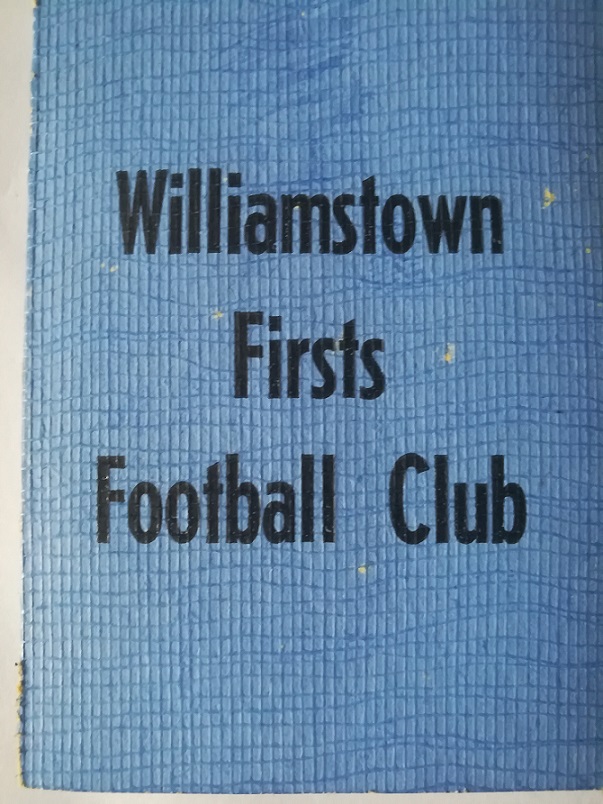 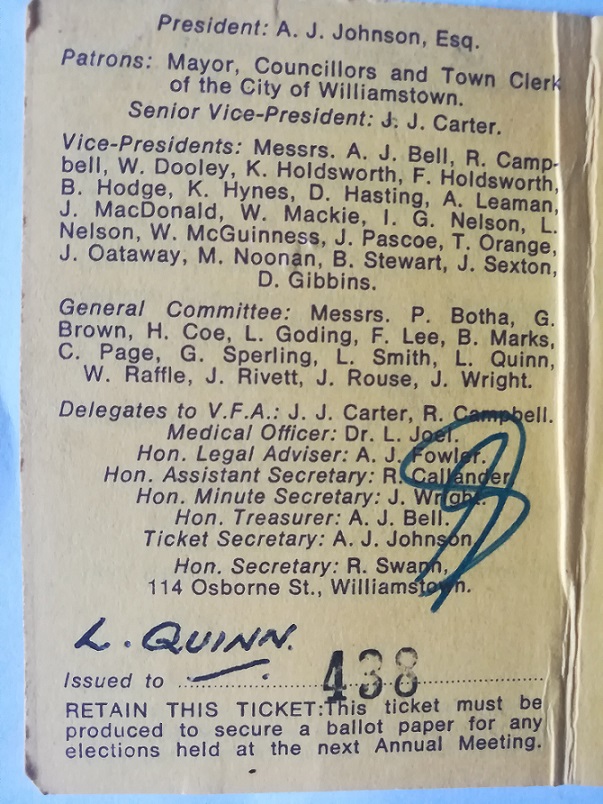 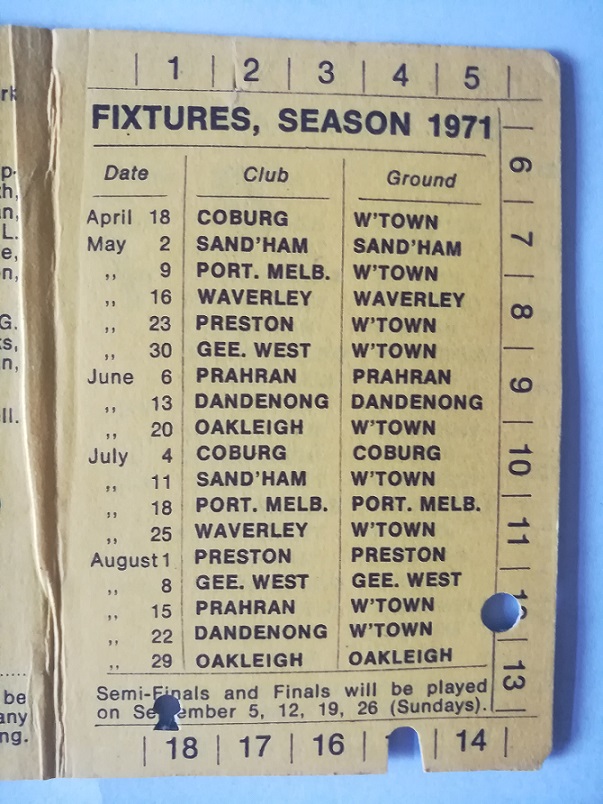 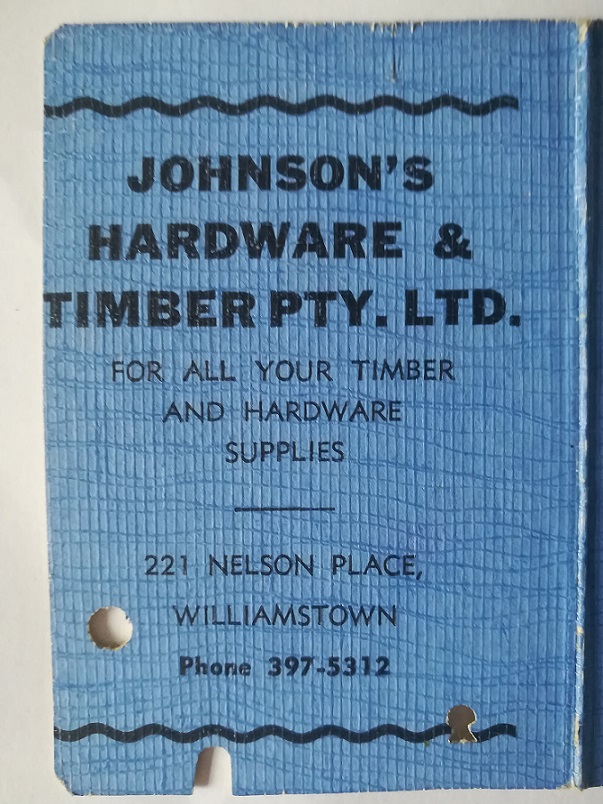 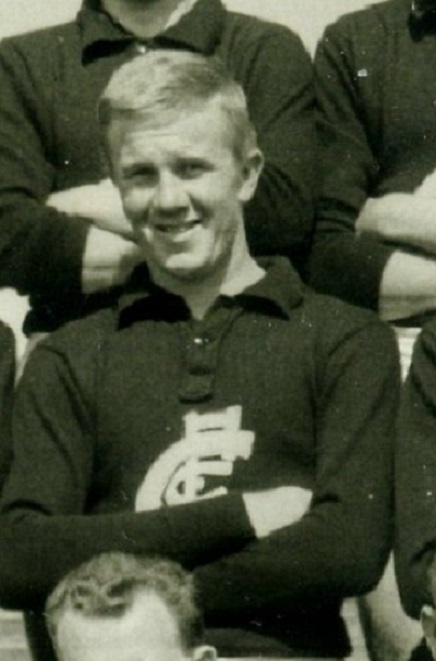 Greg Boxall came to Williamstown in 1971 after 23 games and 67 goals for Carlton Seconds from 1967-70. He also played Thirds football for the Blues. 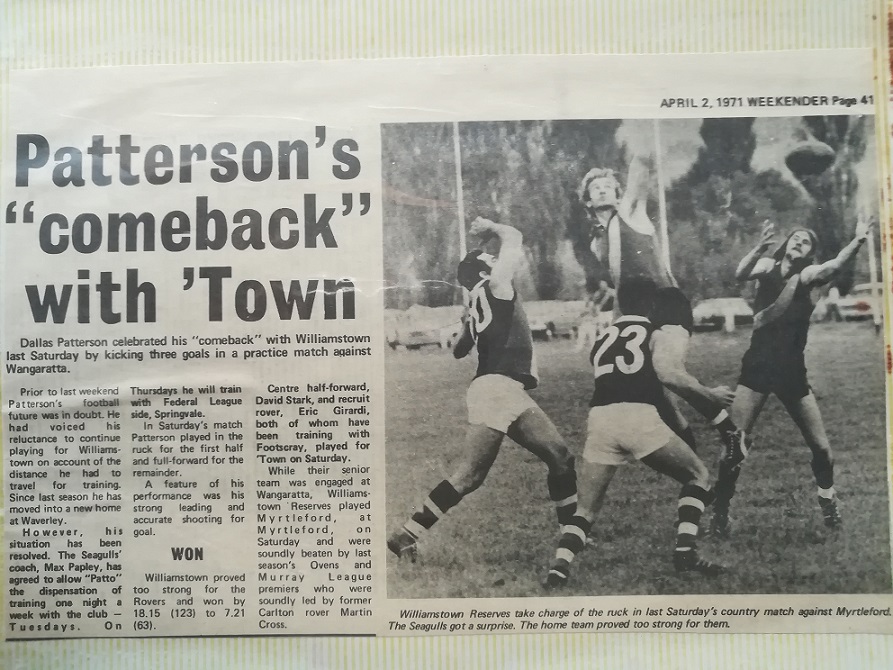 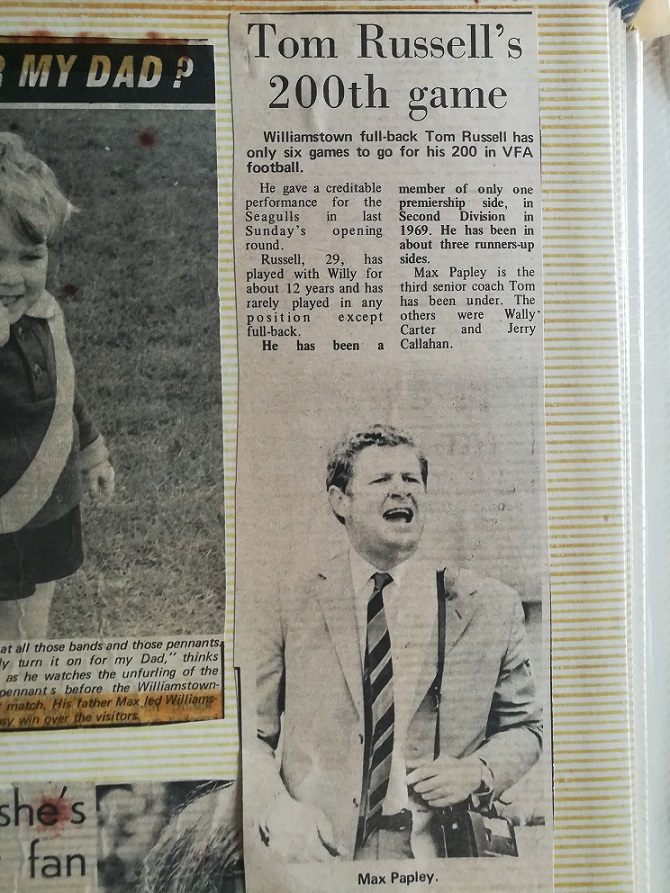 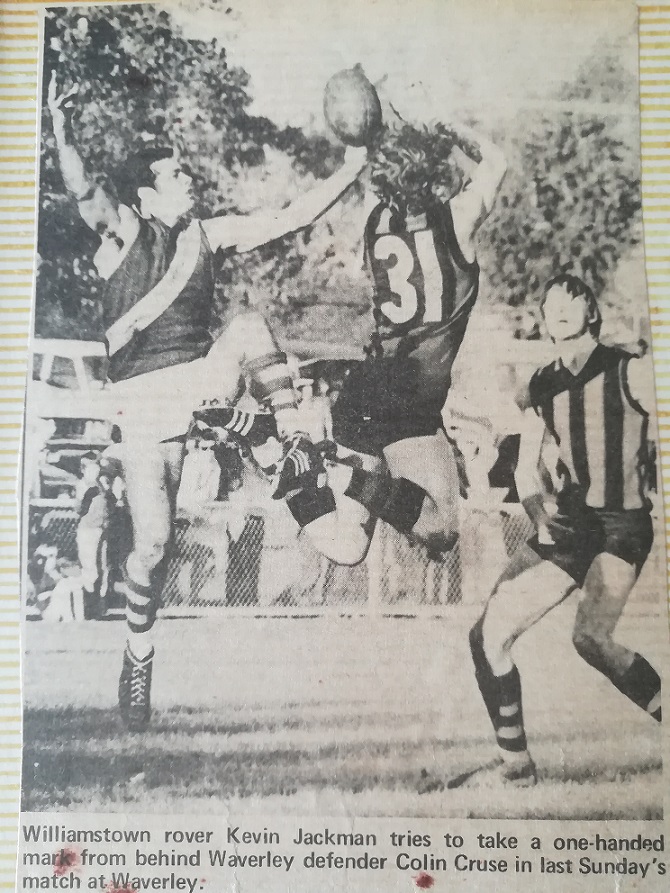 Photo from the round 4 clash at Waverley, which Williamstown lost by 2 goals, 146-134 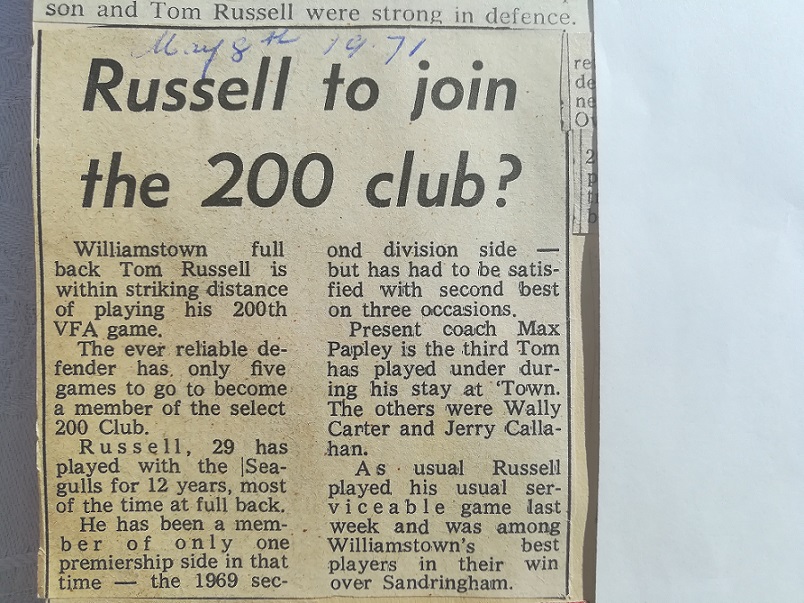 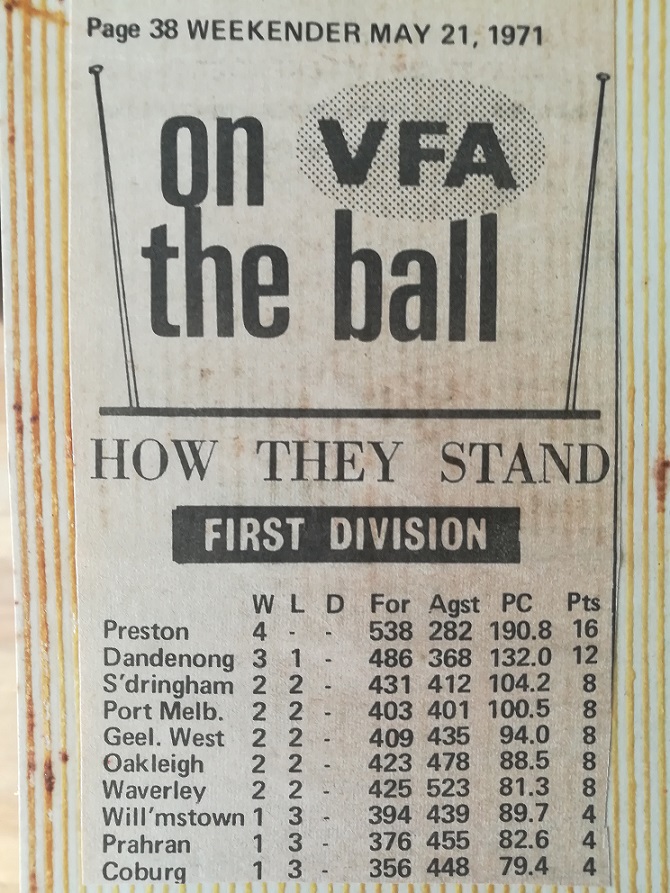 The First Division ladder after four rounds of the 1971 season, with Williamstown in eighth position 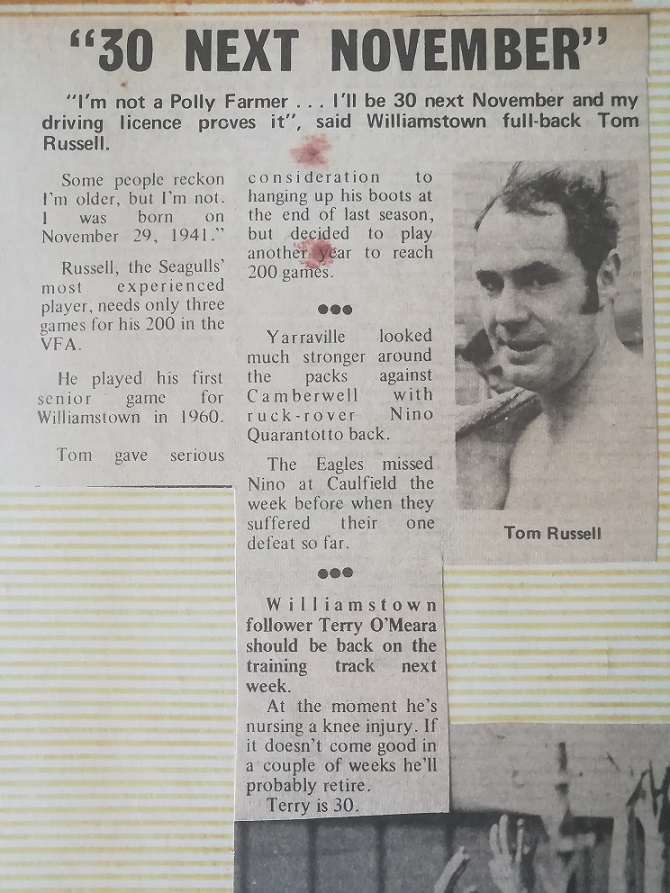 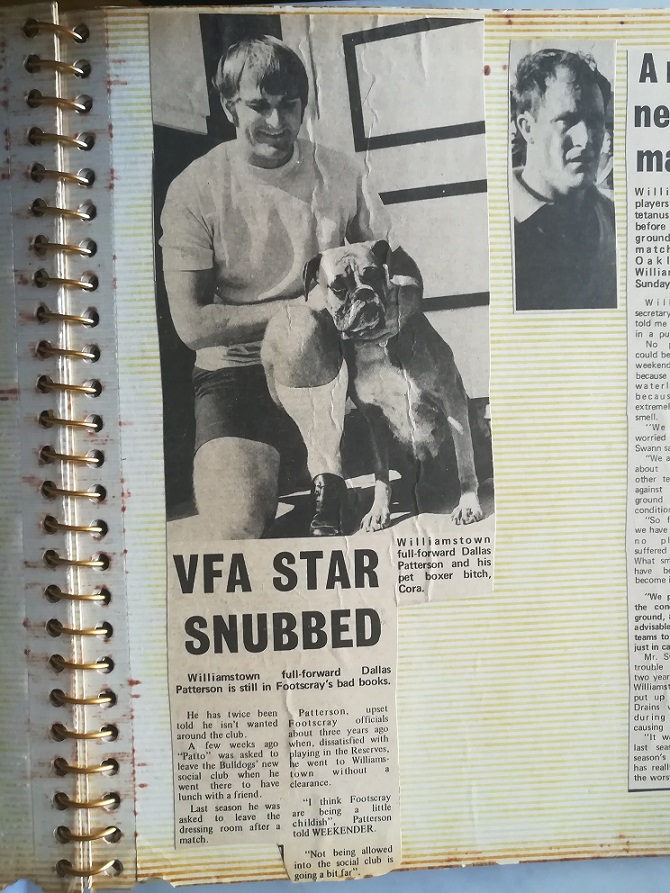 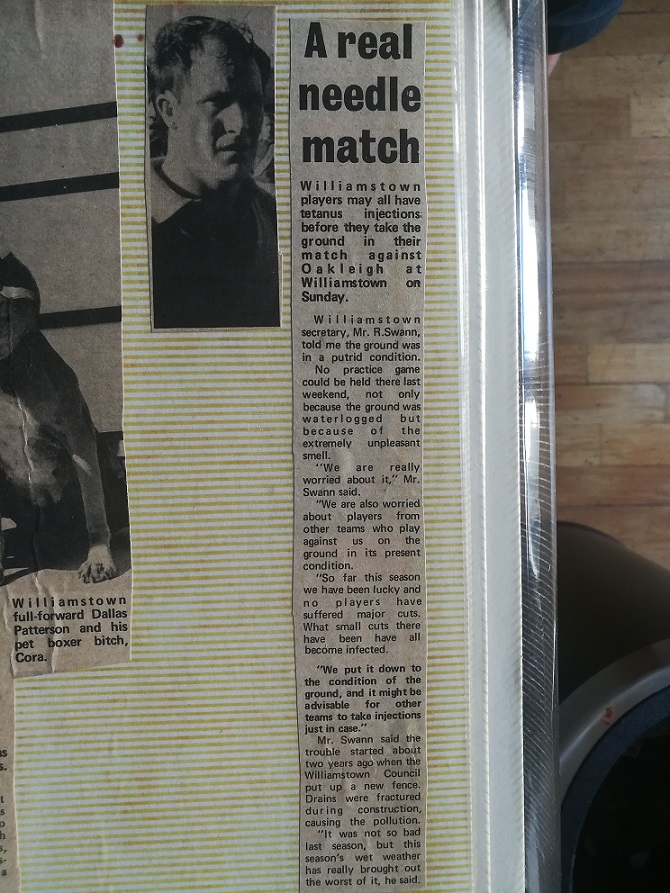 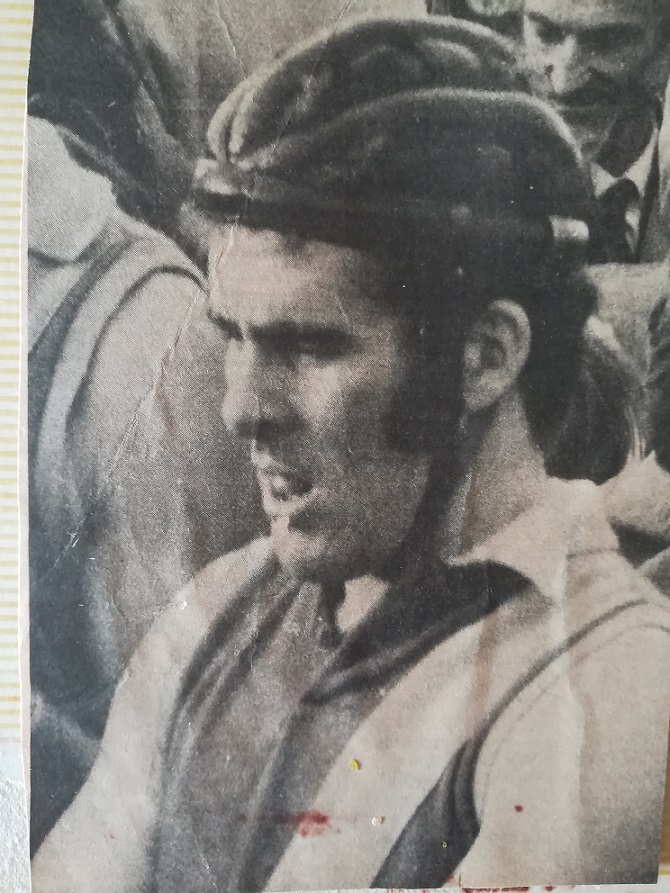 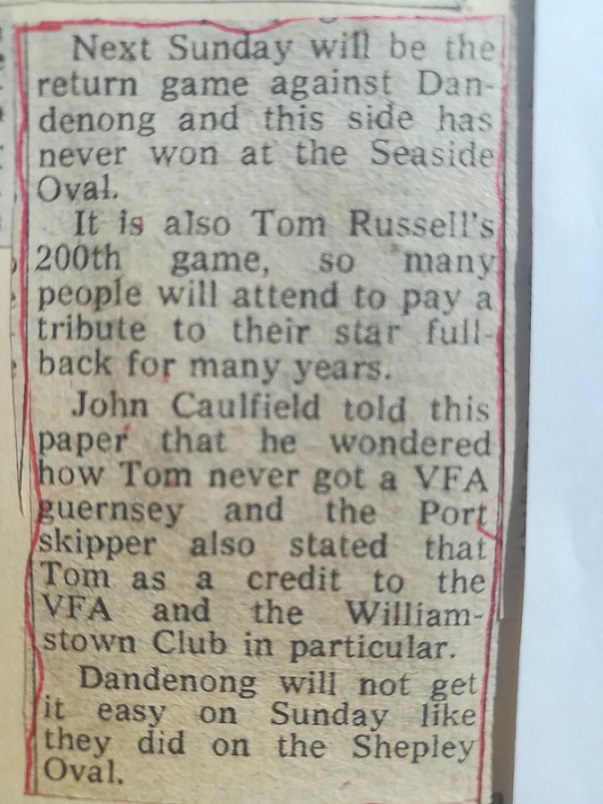 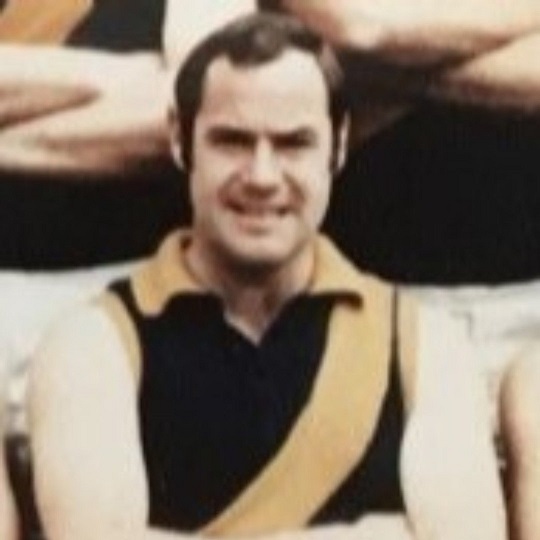 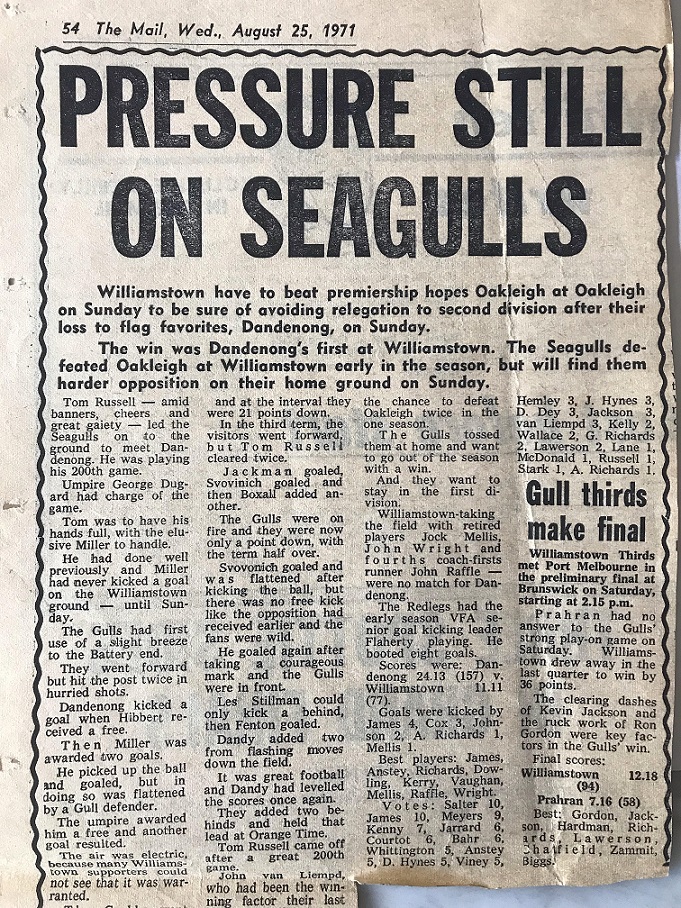 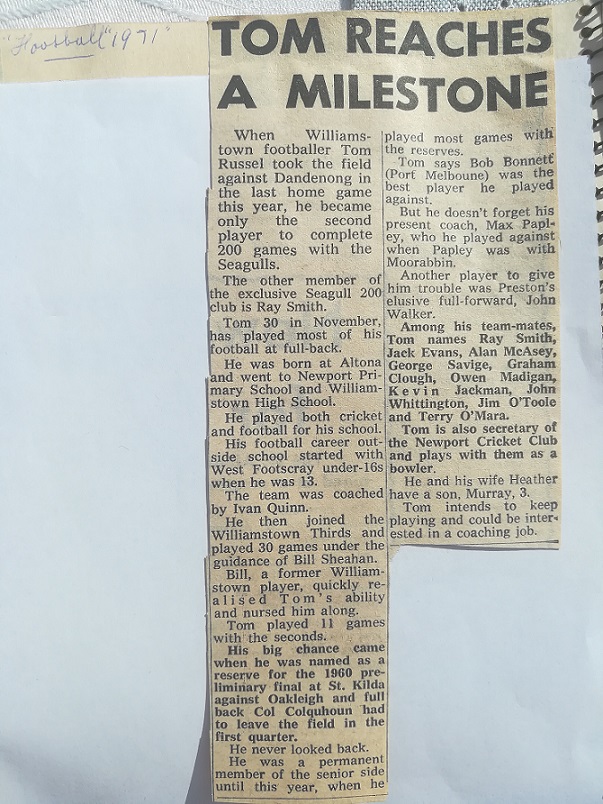 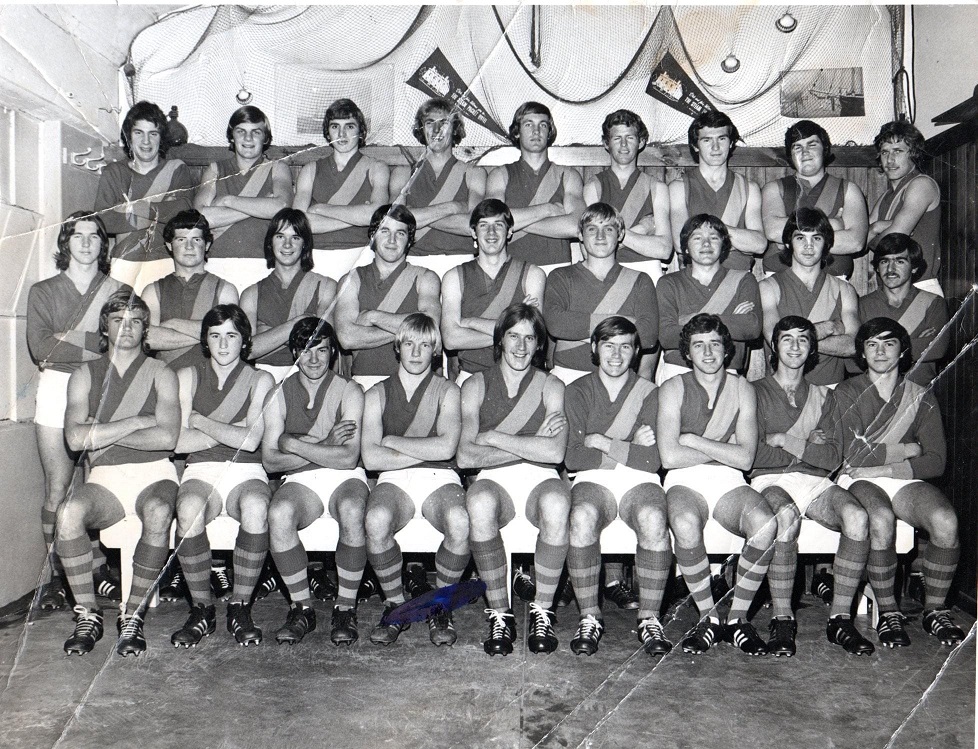 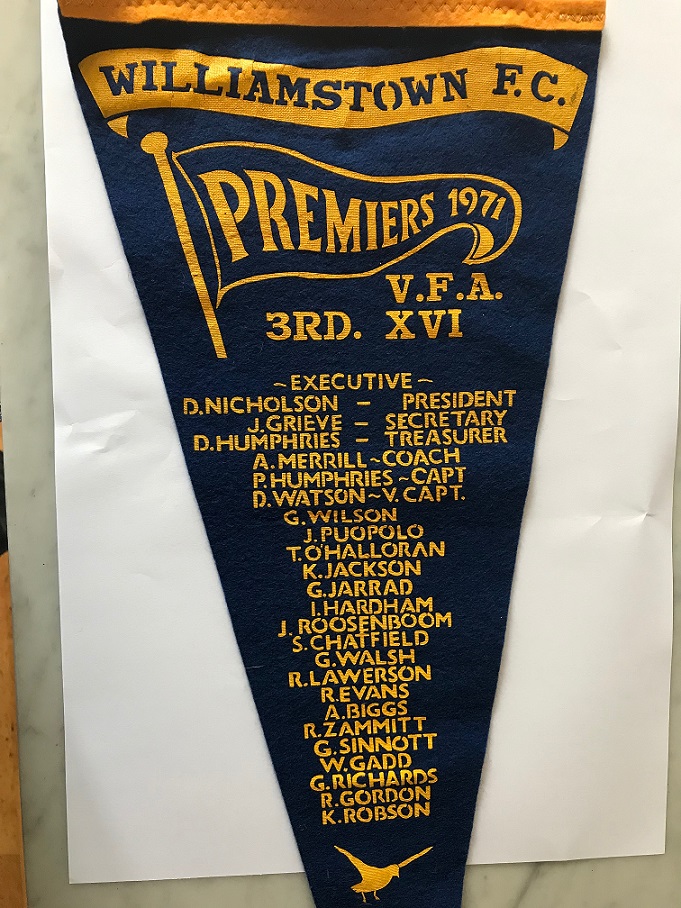 Williamstown Thirds won the premiership in 1971 under coach Alex Merrill 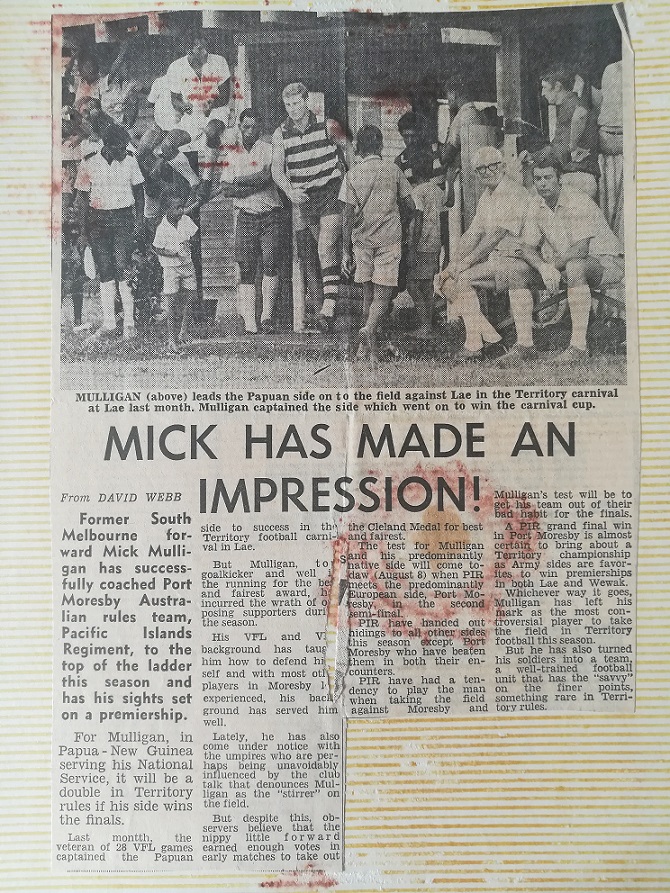 Former Williamstown player, Mick Mulligan, coached in PNG in 1970. He returned to the 'Town in 1971 and topped the Club goalkicking with 75 in 1972 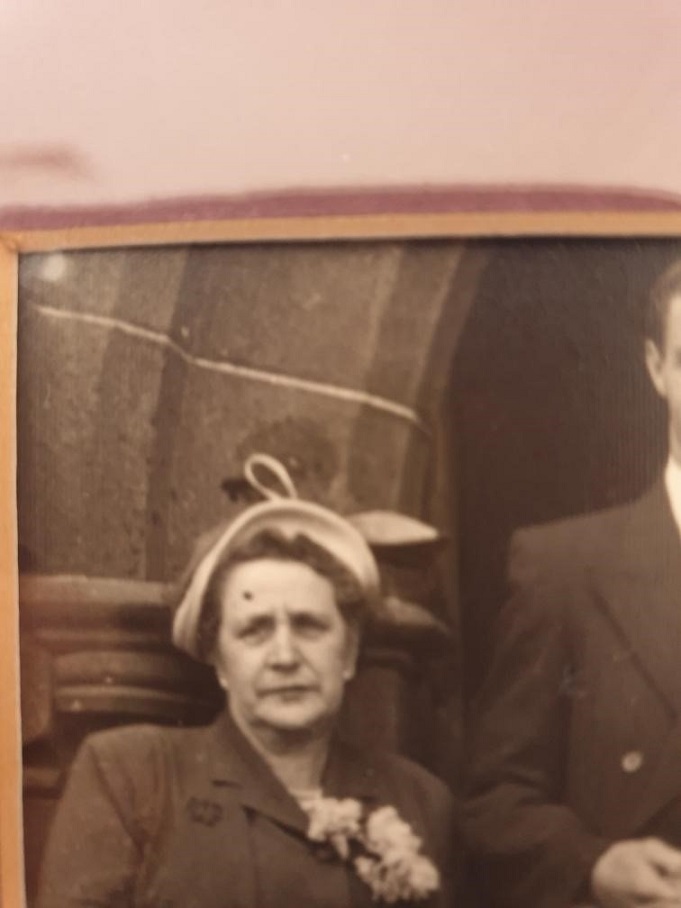 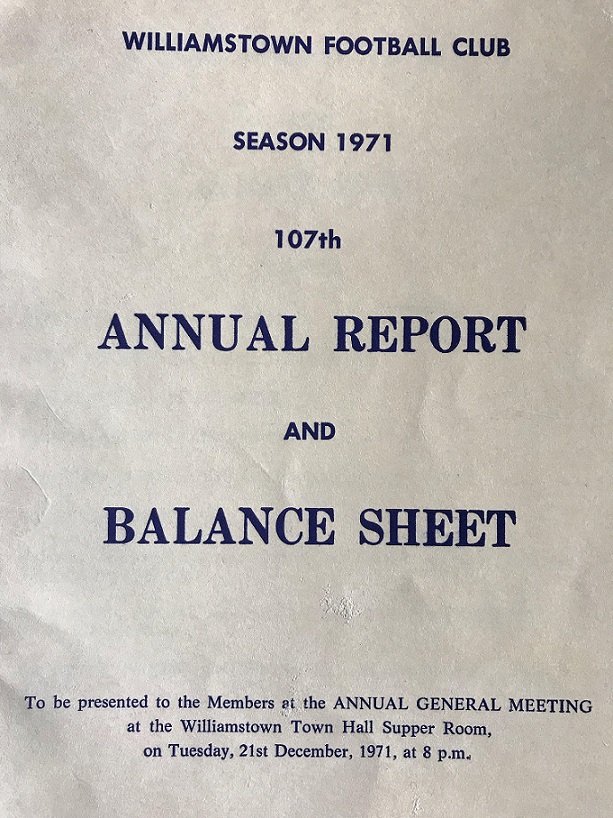 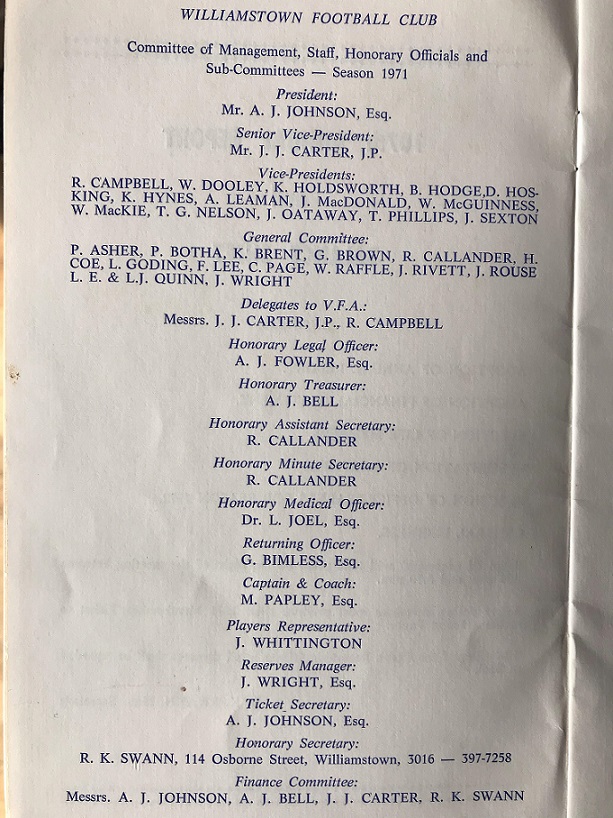 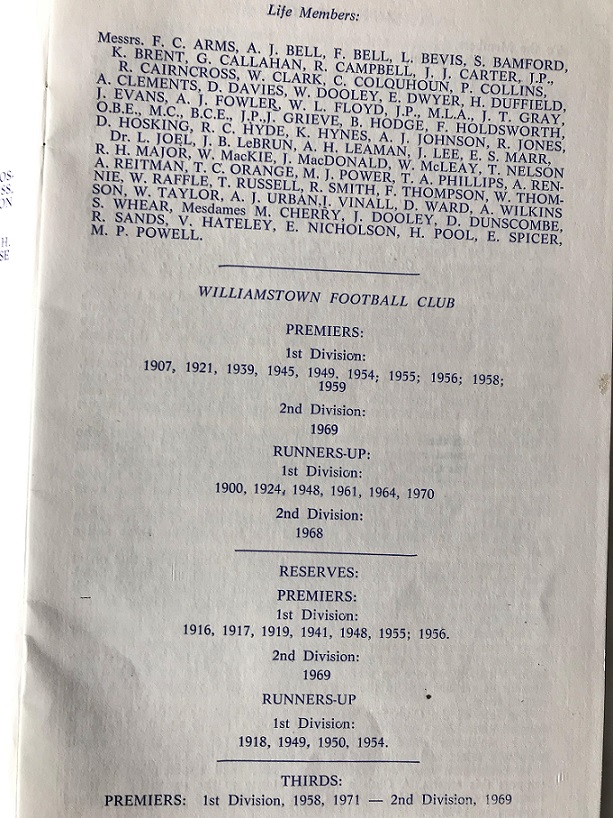 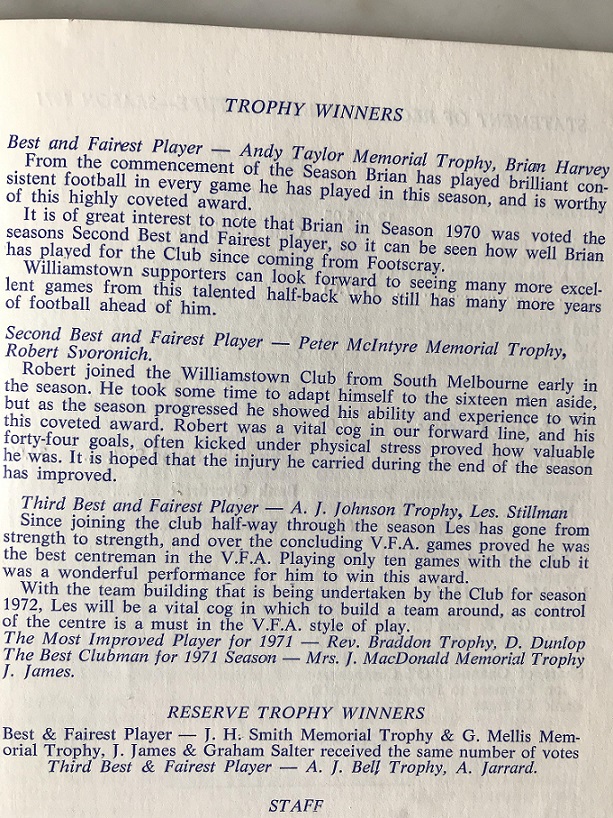 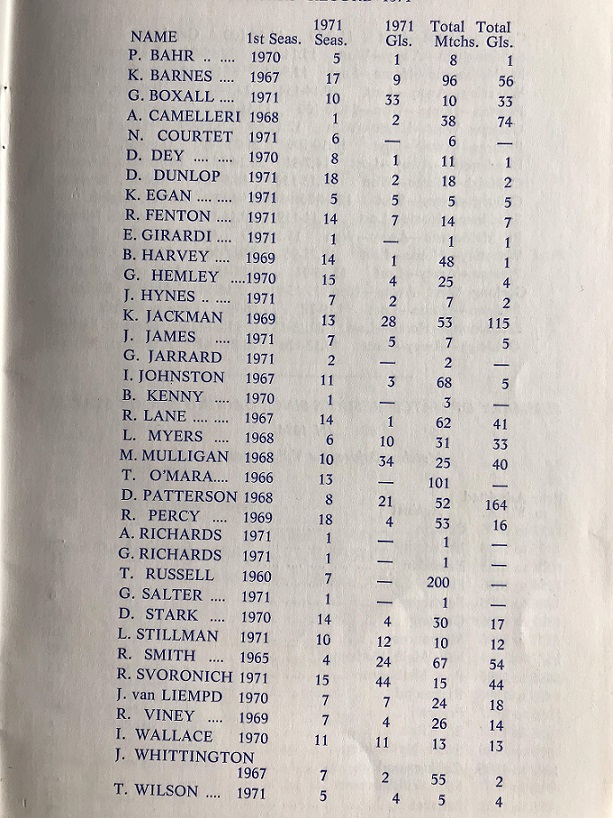 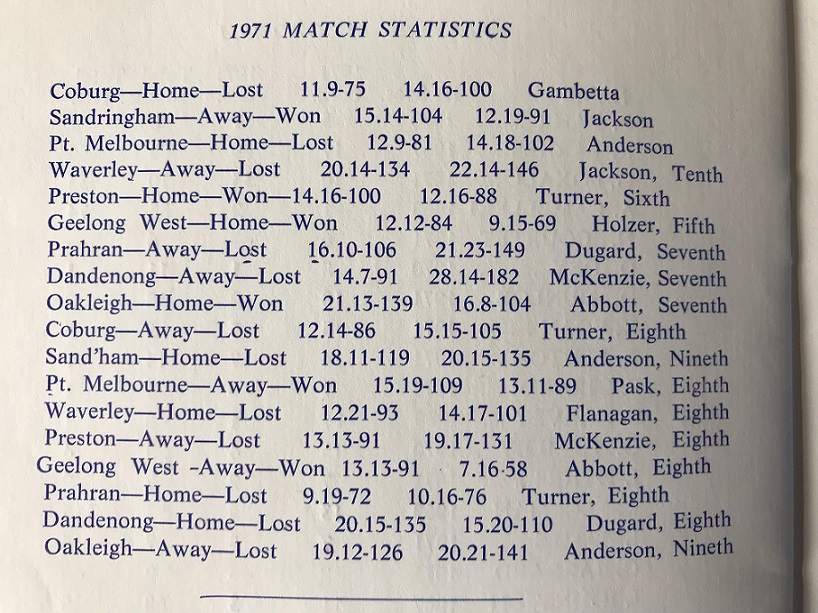