By the mid-1960's, Williamstown was nowhere near the powerful club of the 1950's and no longer did its reputation of almost invincibility trouble the newer clubs to the VFA. A complacent and bloated administration, which lacked the responsibility and experience of the smaller and more disciplined off-field teams of the past, appeared to take consolation in the fact that all clubs go through a slump which eventually can be overcome. For some reason, the number of vice-presidents and committeeman had been allowed to exceed the numbers permitted under the Club's constitution such that, by 1967, the Club had a newly-created position of senior vice-president, 18 vice-presidents and a general committee numbering 17, under the presidency, once again, of Ron Marett. Marett must have had some misgivings about the upcoming season, because at the annual general meeting in respect of the 1966 season held earlier in the year he warned that the season would be a challenge due to the experienced players that would need to be replaced - Keith James (92 games, 190 goals - coach of Canterbury), Graham Clough (108, 129 - coach of Williamstown CYMS), George Savige (73, 52 - coach of Foster) and captain of 1962-66, Daryl Ward, all either retired or transferred to other clubs. Ward came out of retirement to assist the team when things were bad but after two games he was injured and retired again with 188 senior appearances and 157 goals to his name.

In addition, a number of Club stalwarts dropped out, such as Bill 'Digger' Thomson who had been involved for 28 years, mainly as committeeman, property steward and groundsman, Bill McLeay who was moving to Geelong after a 50 year association which commenced in 1917 as a player with Williamstown Juniors, former president Alf Urban, former treasurer Maurie Power, former secretary of 13 years Stan Whear and Len Bevis, a committeeman and vice-president since 1945.

Even so, few expected the disastrous collapse of the 1967 season, arguably one of the worst in Williamstown Football Club's long history, and certainly the Seagulls' worst season since 1938. This culminated in relegation to second division for the first time, a result that was well assured before the end of the home-and-away rounds as the team sat on the bottom of the ladder from round 8. Despite rover Ian Nankervis joining the club from VFL side Carlton and winning the best and fairest award and 15 other new players being added to the playing list, the club won just two games to finish in last place, 4 wins behind second-last placed, Prahran. Bob Lane, Dick Vandenberg and Maurie Fowler all joined 'Town in 1967 from Carlton, along with other notable recruits Owen Madigan (47 games with Footscray and Richmond), Bob Hancock (North Melbourne), Paul Higgins (South Melbourne), Ian 'Hucky' Johnson (West Newport), John Whittington (1966 best and fairest in the Thirds), Eddie Szyszka (West Newport) and Damian Young (Woodville SA). Locals John 'Cashews' Allard, Harry Vosilaitis, Allan Page, John Raffle and Mick Bastian were others to play senior football during the year. Ruckman Ken Barnes returned after four seasons and 17 senior games with South Melbourne. Ken also had a stint as captain of South's reserves team.

Gerry Callahan was sought after by South Melbourne as coach but stayed on to complete 10 years in the role with Bob Ware captain and 1966 best and fairest winner, Jeff Trotman, vice-captain. Ware was replaced by full-back Tom Russell late in the season due to his business commitments, while Trotman was replaced by John Murrie when he had to stop after 5 games due to a serious illness.

Ironically the two victories were against Port Melbourne (10.13 to 4.19) in round 2 and Dandenong (17.16 to 12.19 - Szyska 7 goals) in round 15, the teams that would play off in that year's grand final. Both victories were at home at Williamstown, and the Redlegs were on top of the ladder and the Seagulls last when they met. In the Port Melbourne clash, 'Town's full-back, Tom Russell, importantly held former Hawthorn spearhead, John Peck, to just one goal. Also, between rounds 7 and 14, six games were lost by nine points or less, including a one-point loss at Port in round 11 when Williamstown was last on the ladder and the Borough second. To top it all off, the Seagulls also lost to Preston, one of the finalists, at home by just three points in the final game of the season. The pain of taking home the wooden spoon for the first time in 29 years was emphasised further with the club being relegated to second division for the first time. So, one of the oldest football clubs in Australia and one that had played senior football longer than all the other VFA clubs and at least four of the VFL clubs had suffered its most bitter blow since its formation in the 1860's.

On a positive note, the Club announced that a Fourths team would be formed to compete in the Western Suburban League under 16's competition from the following season.

At the end of the 1967 season, Seagulls legend Gerry Callahan called time on his ten-year, 202-game coaching career with Williamstown (for 118 wins, 81 losses, 3 draws), the longest tenure in this Club's history, despite the fact that he still had two years of a five-year contract left to run. Given Callahan had been a major part of the club as either a player or coach since 1951, his departure further compounded the fact that Williamstown had been relegated from first division football. Callahan finished his career having played 171 games, kicking 75 goals, winning five premierships in 1954, 1955, 1956, 1958 and 1959 in the blue and gold (the latter two as captain-coach), as well as two best and fairest awards in 1951 (his first season) and 1957. He was captain from 1954-1959, the equal-longest reign in the Club's history, shared with Ben Jolley (2012-2017). He also coached the Seagulls to grand finals in 1961 and 1964. He was named captain and selected at centre-half back in Williamstown's Team of the Century and coach of the 1960's Team of the Decade. A glorious era had ended. Gerry Callahan passed away at the age of 89 in March 2018.

Ian Nankervis won the Andy Taylor Memorial Trophy for best and fairest in his first year with the Club from John Murrie and Owen Madigan, also in his debut season. Nankervis polled the Club's most number of votes in the Liston Medal and he also took out the Williamstown Advertiser best player award. Former Footscray player, Algy Vosilaitis, received the most consistent player trophy. Eddie Szyszka, another recruit, topped the goalkicking for the year with a total of 54, including 10 in a two-point loss to Brunswick at Williamstown in round 10, which placed him third on the VFA list. Winner of best first-year player, Szyszka was not listed in the team's best players for his effort against the 'Wicks. The team kicked a total of 193 goals and 222 behinds (1380) to the opposition's 229 goals and 272 behinds (1646). Other players to kick more than ten goals over the course of the season were Ian Nankervis (30), Maurie Fowler and Bob Ware (15), and Bob Hancock and Algy Vosilaitis (13). John Murrie, Tommy Russell and Nankervis were the only players to appear in all 18 encounters during the year.

The Reserves and Thirds had lean years also, with both finishing well down their respective lists. Jocka Mellis continued on as coach of the Seconds while future Senior premiership player, Bob Smith, won the best and fairest award. Keith Reitman was again president of the Reserves, with Bernie Johns secretary and Ian McLeod treasurer.

John McConville also coached the Thirds again and Kingsville recruit, Peter Sonsie, took out the best and fairest in that grade as well as the best first-year player award. Ian Walker was leading goalkicker in the thirds. Only three wins were attained in this season, all against teams below them on the ladder. Doug Nicholson was again president, with John Grieve secretary for the fifth successive year and John Raffle as treasurer for the third season.

Jeff Trotman, the 1966 best and fairest winner and 1967 vice-captain, was tragically killed in a car accident on December 29 1967, at the age of just 24. Jeff played 19 games for Williamstown, and was forced into retirement through a serious illness five games into the 1967 season.

Life memberships were awarded to the Club's vice-president from 1958 and VFA delegate from 1961, Ron Campbell, as well as treasurer from 1965/66 and committeeman from 1957-63, Alf Leaman, at the annual meeting held at the Town Hall in respect of the 1966 season in February of this year. Club captain and ten-year player, Daryl Ward, also received life membership. At the annual meeting held in respect of the 1967 season at the Town Hall in December, life memberships were also bestowed on long-serving minute secretary, Bernie Marks, and Ladies Committee member, Dawn Dunscombe.

A big positive for the VFA in this season was the move by Channel 0 (now the Ten Network) to televise games each Sunday. The first division finals were played at Richmond's Punt Road oval, which had been vacant since the Tigers moved to the MCG, as soccer had taken over St Kilda's Junction Oval, while the second division finals were moved to Coburg. Dandenong won their initial first division flag by defeating Port Melbourne, while Oakleigh were second division premiers. 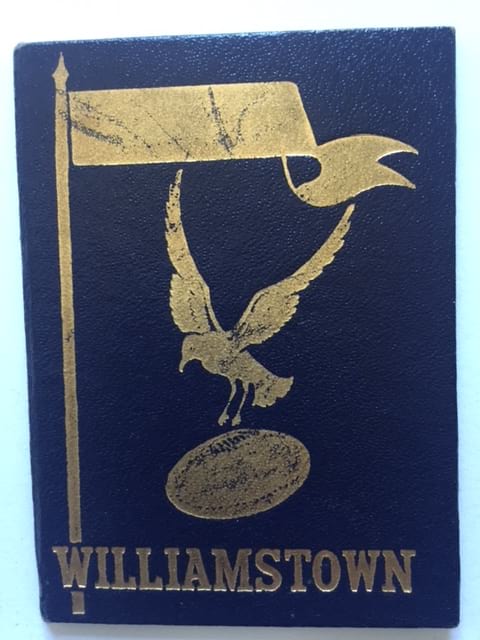 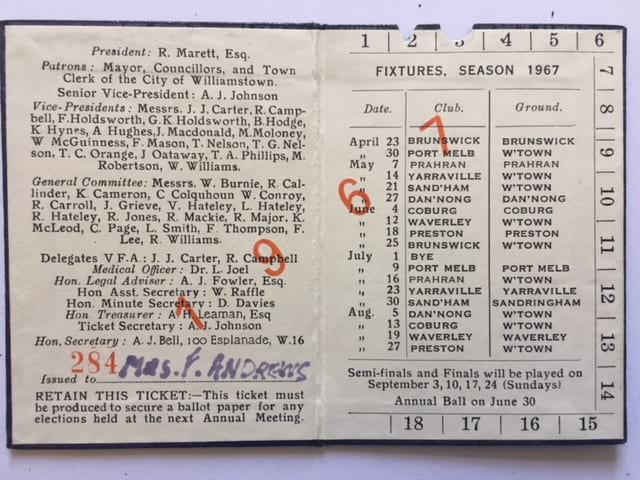 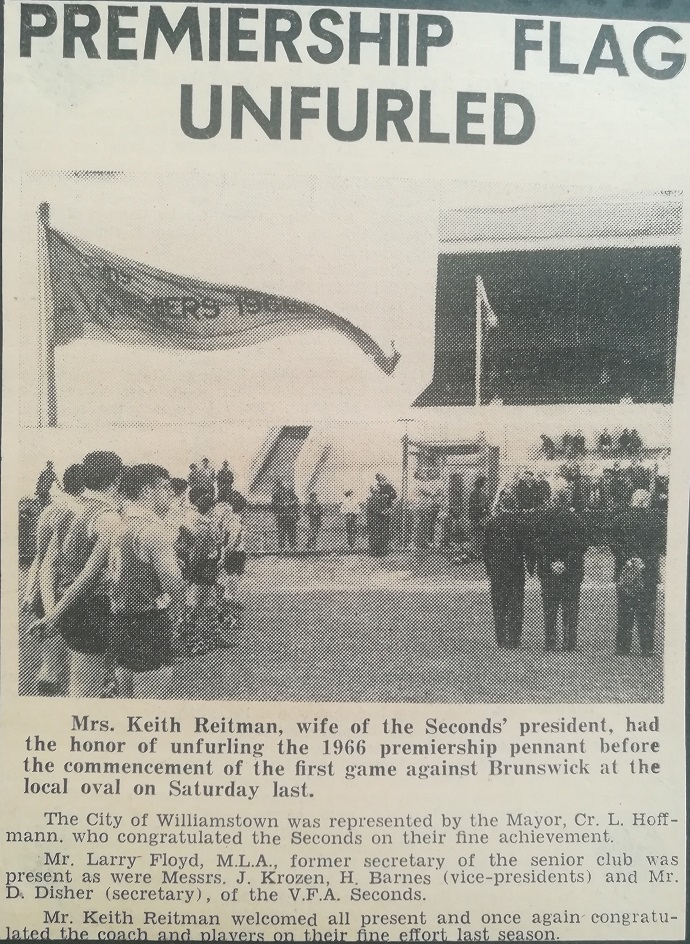 The unfurling of the 1966 Reserves premiership flag prior to the opening match of 1967 on April 23. 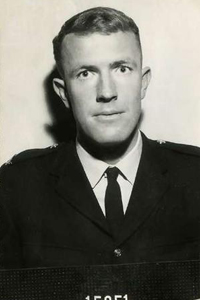 Bob 'Penny' Lane came to Williamstown from Carlton in 1967. A policeman, he would be murdered on Friday the 13th of July 1979 at Wakool River, Kylalite NSW while on duty. He played 84 games and kicked 46 goals for Williamstown from 1967-1975, including the 1969 premiership victory. 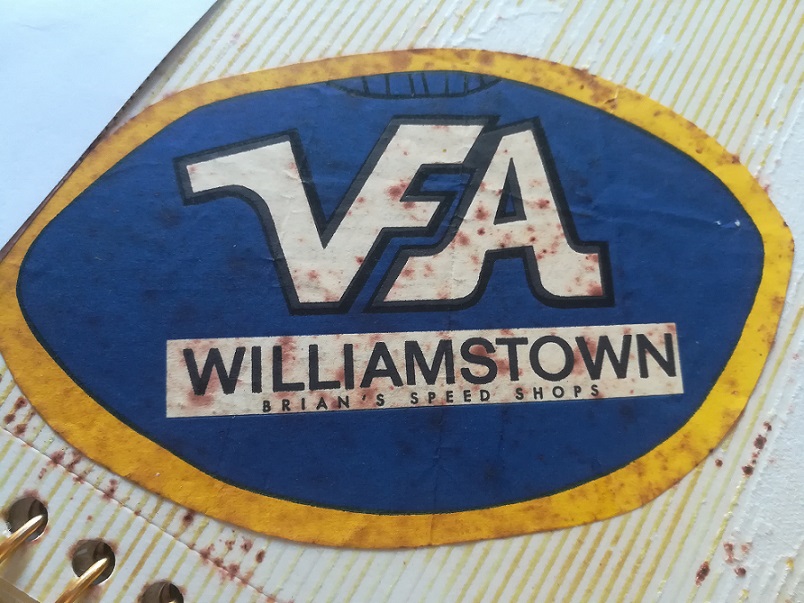 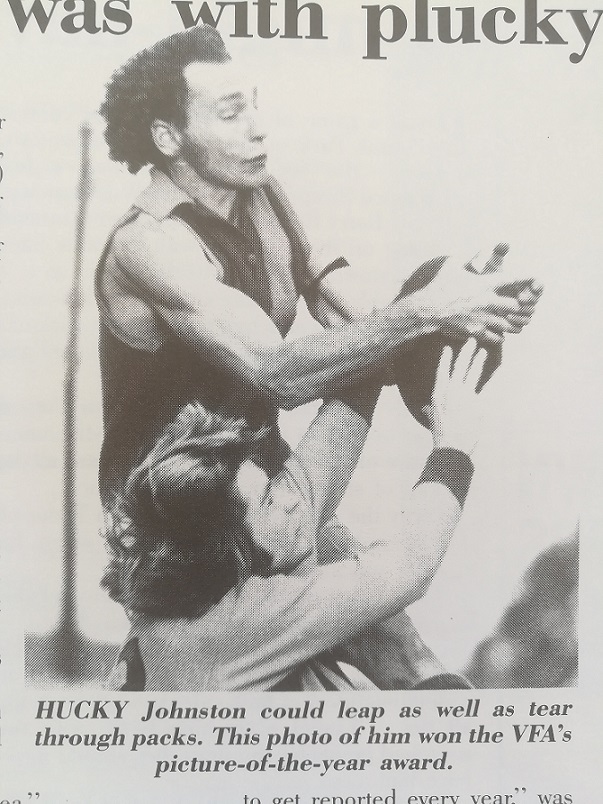 Ian 'Hucky' Johnston joined the Seagulls in 1967 and played 72 games up until getting badly injured in 1972. 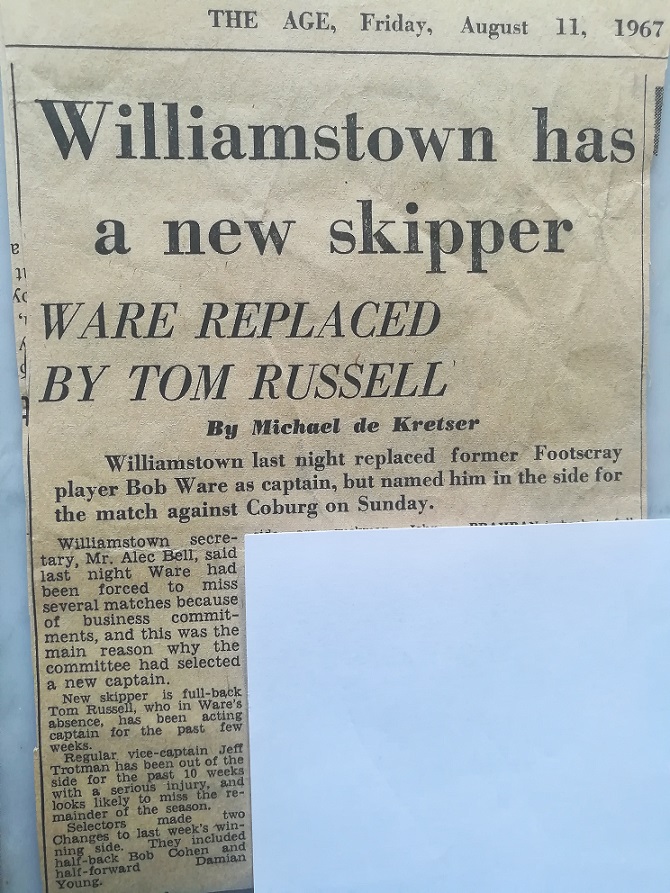 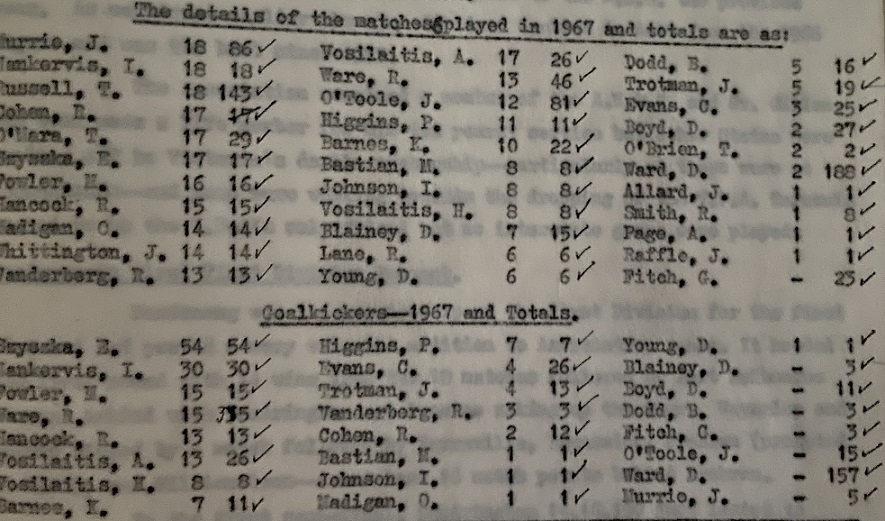 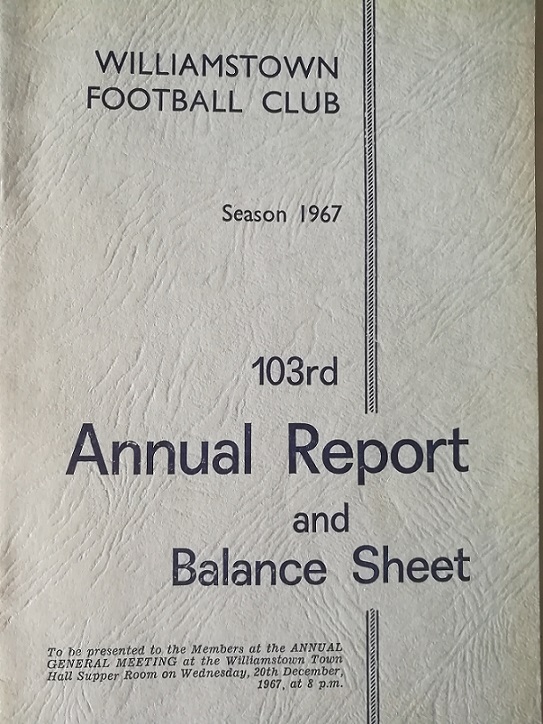 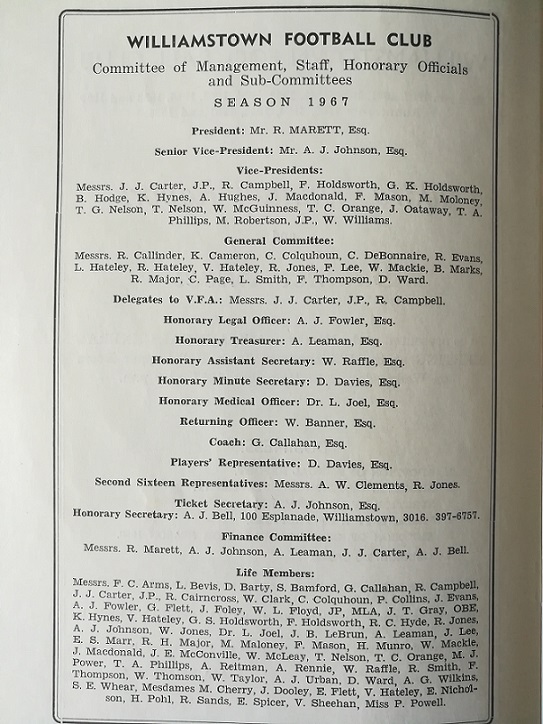 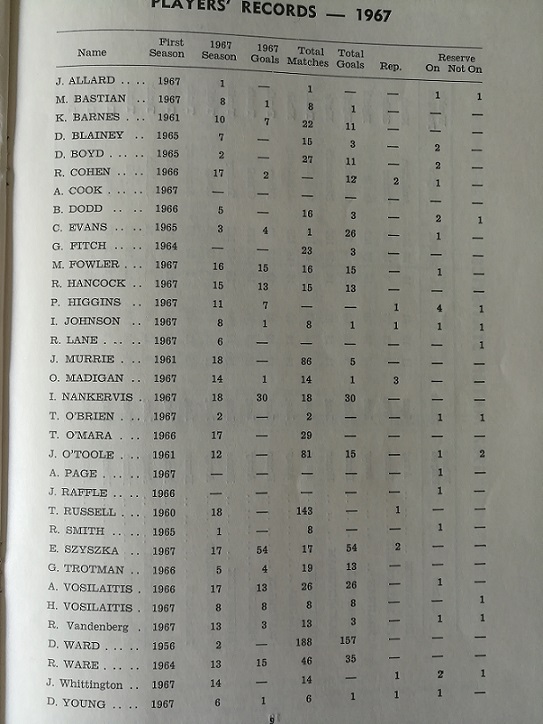 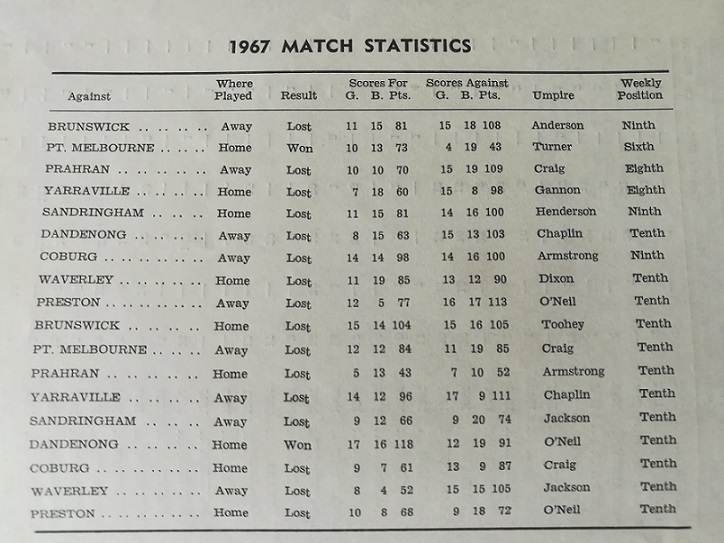 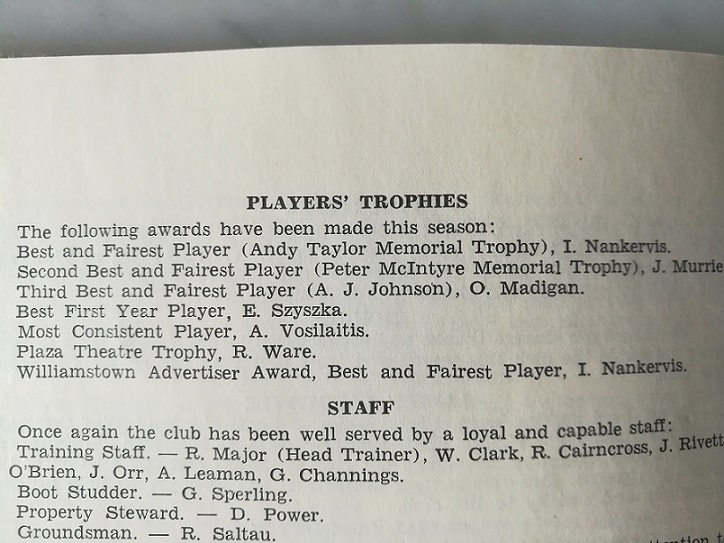