Just prior to the start of the 1965 season, North Melbourne completed an agreement with the Coburg City Council to occupy the Coburg ground for the next seven years, despite the fact that ratepayers had already shown their disapproval of the arrangement at a by-election where a candidate supporting the takeover was badly beaten. The VFA took out a Supreme Court writ which temporarily stopped the Council from seeking a loan of up to 100,000 pounds to update facilities at the ground including the erection of a new grandstand, but then the Coburg committee decided to disband the Club and merge with North in return for two seats on the North committee. Six officials undertook to keep the Coburg club alive and during 1965 Coburg trained at Brunswick and played at Port Melbourne. The VFA disqualified the Coburg officials from the 1964 administration who were pro-North and then rescinded the permit agreement with the VFL when the League refused to endorse the Association's actions. A subsequent general election of the Council in August saw several others who backed the North deal kicked from office.

Despite advancing years, Arthur Johnson was re-elected president of the Club at the annual meeting in respect of the 1964 season held in early 1965 despite intimating that he would step down at the end of 1964. Johnson's connection with the Club commenced when he was appointed secretary in June 1922 following the resignation of Les Thompson. His father, Arthur Johnson snr, had earlier been president in 1911, a vice-president in 1908, secretary from 1908-10 and 1912-13, the Club's VFA delegate from 1910-13 and treasurer in 1905. Gerry Callahan acted as coach for the eighth successive year, while Daryl Ward was re-appointed as captain with Bob Ware his vice-captain.

The writing was on the wall for the Seagulls in 1965, with the club losing a wealth of experienced key position players to coaching posts with other clubs coupled with the unexpected retirements of several players both before and during the season, which would make the task of challenging the top teams over the following years even more difficult.  Players departing included Lindsay Murphy (125 games, 146 goals) to Parkside, Leo Maloney (107, 115), Alan McAsey (80, 61) to Finley, Greg Taube (73, 2) and Bobby Turner (54, 90). Turner did return in 1966 and played a further three games. Furthermore, vice-captain Ware was restricted to only eight games due to a serious illness (hepatitis). The only recruit of note was former Footscray and South Melbourne player, Charlie Evans. Dave Boyd and Kevin Rogan (both South Melbourne Seconds), Eddie Wallace (Footscray Seconds), Ross Bryant, Bill Dooley (son and grandson of Club greats of the same name), Neill McDonald, John Cousins, Cameron McDonald and Terence O'Brien were others to play senior football during the season for the first time.

This was made clearly evident by the poor season that followed, with the Club missing the finals for the second time in three years. Playing its fifth consecutive match at North Port Oval (the last home and away match of 1964 and three finals were all played at Port Melbourne), the season opened brightly enough for the Seagulls with a victory in the 1964 grand final rematch away against Port, 12.10.82 to 9.20.74 (Jim Jenkinson 4 goals, Bob Ware best player), and saw the Club in fourth position, the only time all season it was in the four. Ten losses in the next twelve games, headlined by the 46-point defeat at Pt Gellibrand by Waverley, second-last in 1964, meant the finals were out of question, although the Panthers would go on to win the premiership in 1965. The team fluctuated between seventh and eighth spot on the ladder all year. As the season progressed it was obvious that the lack of experienced key position players and injuries made serious inroads on the strength of the team, and by round 13 only three wins had been recorded and relegation to the second division seemed a possibility. Four successive victories in rounds 14-17 at home against Coburg (14.11.95 to 8.10.58) and Oakleigh (9.7.61 to 6.6.42) and away against Geelong West (5.13.43 to 4.5.29) and Yarraville (11.15.81 to 8.11.59), enabled the Club to finish seventh on the premiership ladder with a 7-11 win/loss record, five games out of the final four. More significantly, Port registered their first win at Williamstown since 1952 in their first meeting at Pt Gellibrand on a Sunday, and Jim Jenkinson was the leading goalkicker with a total of 29, the lowest since Bob Addison's 23 majors in 1933. The team averaged just over nine goals per game in 1965. Only Oakleigh, the disadvantaged Coburg (which lost the first seven games) and the newly-promoted Geelong West did worse. Despite this, the Club re-appointed Gerry Callahan as coach for a further five years.

Reliable full-back, Tom Russell, won the Andy Taylor Memorial Trophy for best and fairest from Jenkinson and captain Daryl Ward followed by Bob Ware, who played only 8 senior games for the year. Russell played his 100th senior match for Williamstown during the year and also tied with recruit, Charlie Evans, for the Advertiser award. The team kicked a total of 169 goals and 195 behinds (1209) to the opposition's 194 goals and 220 behinds (1384). Apart from Jim Jenkinson's 29 majors, others to boot more than ten goals during the season were George Savige (16), Max Graham (12) and Dave Boyd and Neill McDonald (11). Russell, Savige, Jenkinson and John Murrie were the only players to appear in all 18 encounters during the year.

Club captain and vice-captain, Daryl Ward and Bob Ware, were both selected to represent the VFA against WA at Subiaco in June, while John Murrie played against Tasmania at Toorak Park in July. Both teams were coached by Gerry Callahan. The Association led by two goals at half-time in Perth but eventually lost by just 9 points, 12.17.89 to 12.8.80, the closest it ever came to beating WA. Ware was diagnosed with hepatitis after the game and only appeared for Williamstown one more time during the season. The Tasmanians were defeated by 7 points, 12.11.83 to 11.10.76. At the behest of Richmond coach, Len Smith, who was forced to stand down due to ill-health, Callahan was encouraged to apply for the vacant job at the VFL Tigers but lost out to none other than Tommy Hafey.

The Reserves, under new captain-coach and best and fairest winner, Jocka Mellis, could manage only five victories and finished eighth. Former senior player player (1945/46, 11 games) and captain-coach of the Seconds premiership team of 1948, Jack Vinall, became president of the Seconds in this season, with Max Chamberlain as secretary and Ian McLeod as treasurer.

The Thirds, under new coach, former senior player of 1961-64 (24 games), John McConville, made the finals and won the first semi before losing the preliminary to finish in third place. Cyril 'Spike' Harris won his second successive best and fairest in that grade. Doug Nicholson commenced his long reign as president of the Thirds in this season, with support from secretary, John Grieve, and treasurer, John Raffle, who was also captain of the Thirds.

Secretary since 1952, Stan Whear, stepped down from the role at the end of 1964 after a record 13 seasons and was replaced by Alec Bell. Larry Floyd's nine seasons spread over 14 years including the war recess of three years was next best. Whear continued on as a vice-president for the next two seasons.

Long-serving Thirds trainer, Wally Clark, committeeman from 1961, Fred Thompson, and former player, Bob Hyde (1933-36, 57 games & 22 goals), who had been a trainer since 1955, all received life memberships at the annual meeting in respect of the 1964 season that was held at the Town Hall in February. George Homewood, life member and committeeman from 1959-65, passed away during the year.

George Holdsworth stepped down as vice-president at the end of this year after having served in that role since 1951.

Fred Liebert, who played for Williamstown in 1890, attended a Past Players and Officials function during the season despite being in his 98th year, making him most likely the oldest living 'Town player at that point in time. Another former captain-coach, VFA Medal winner and Club best and fairest recipient, Fred Brooks, became the Victorian Director of Education in 1965 while Club president of 1931-35, Jim Gray OBE, resigned from the Williamstown Council after more than 30 years service. A plaque was later installed in the foyer of the Town Hall as a tribute to the public esteem in which he was held.

Werribee was admitted to second division in 1965 and won five games and the name of Brighton finally disappeared from the VFA when Caulfield dropped it from its name after operating as Caulfield-Brighton for the 1962/63/64 seasons.

Melbourne's oldest suburban newspaper, The Williamstown Chronicle, ceased publication and was taken over by The Advertiser after recording events in and around the town for over 100 years. 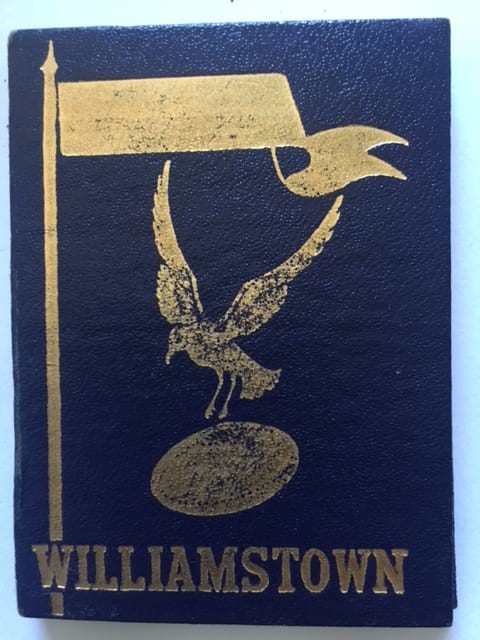 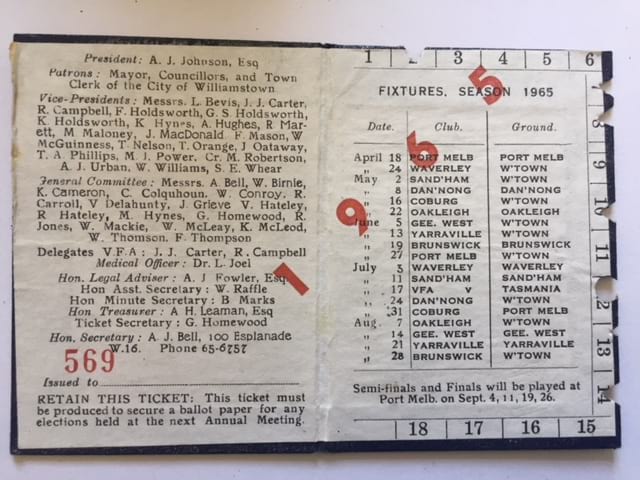 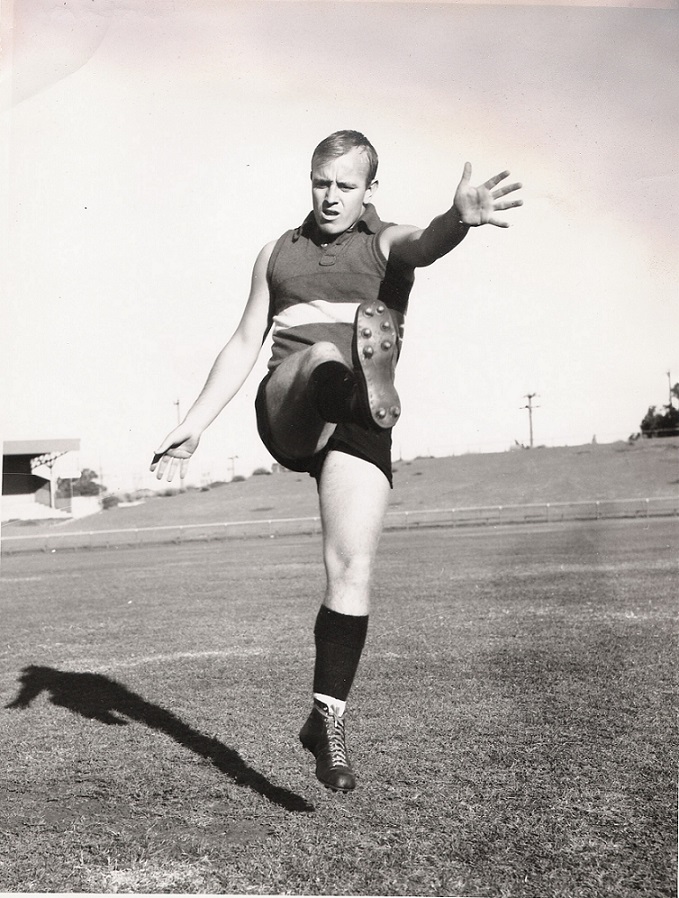 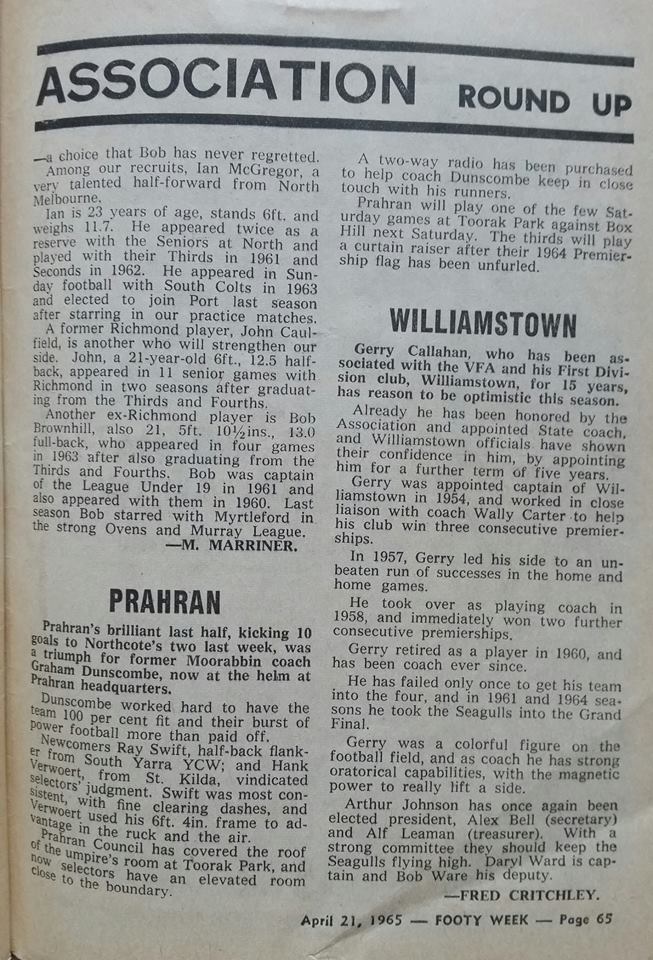 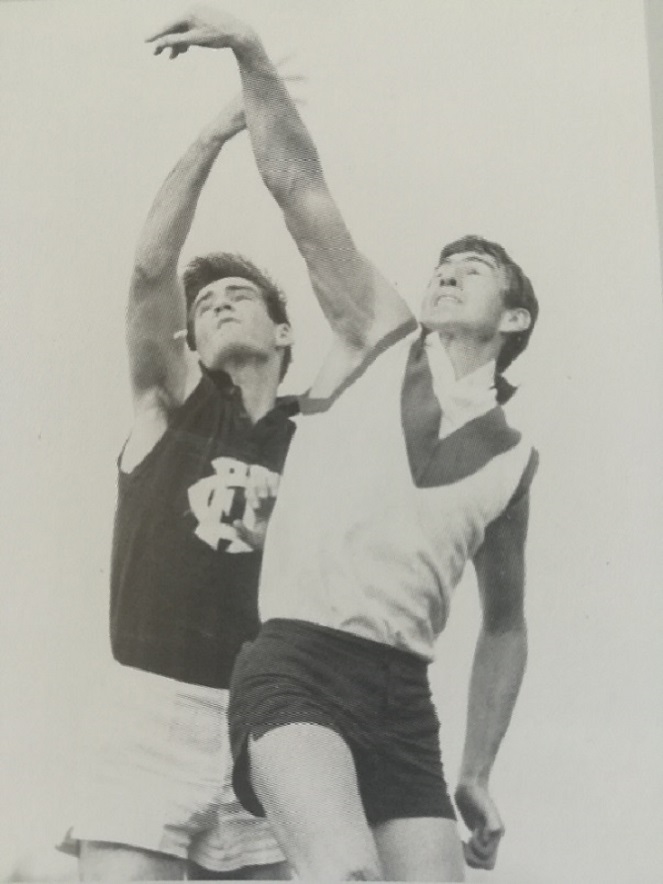 Williamstown ruckman Ken Barnes during his stint at South Melbourne from 1964-67, contesting with Gary Lazarus of Fitzroy. 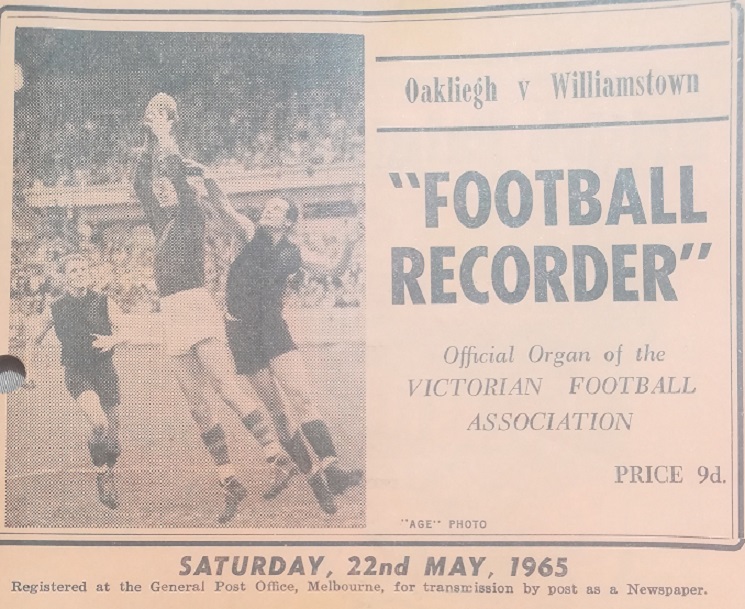 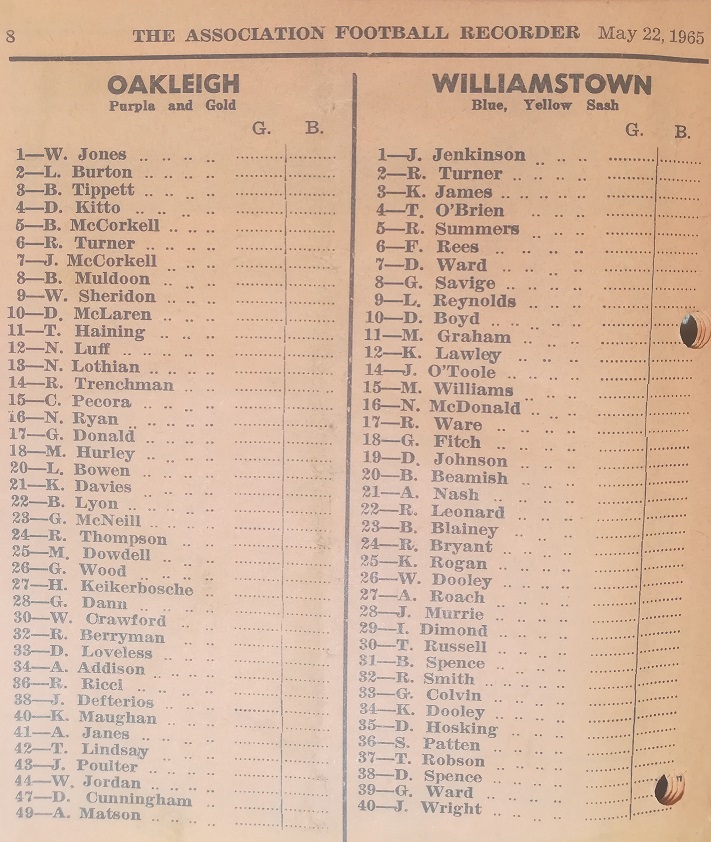 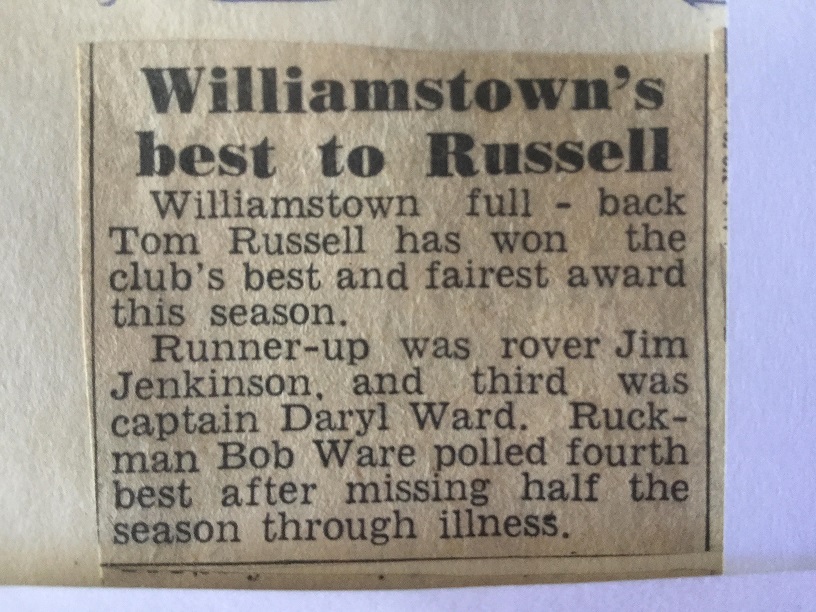 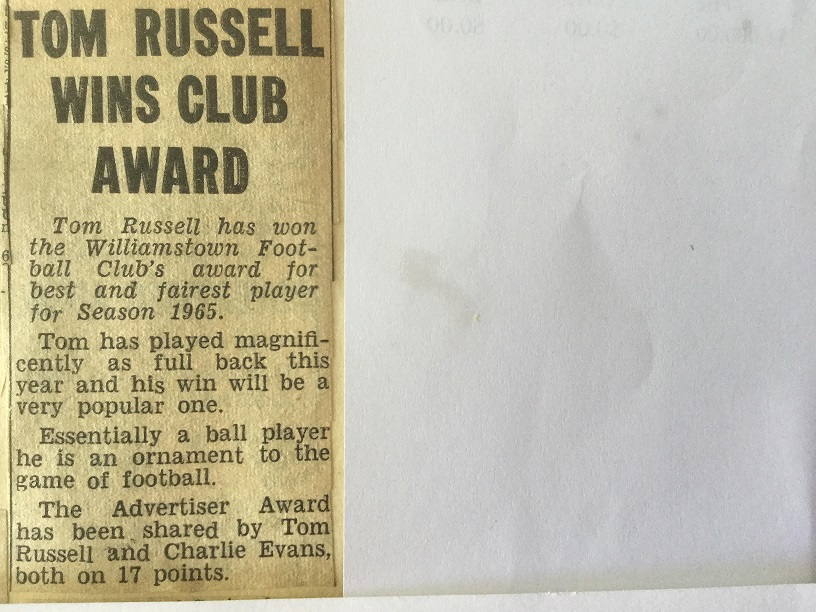 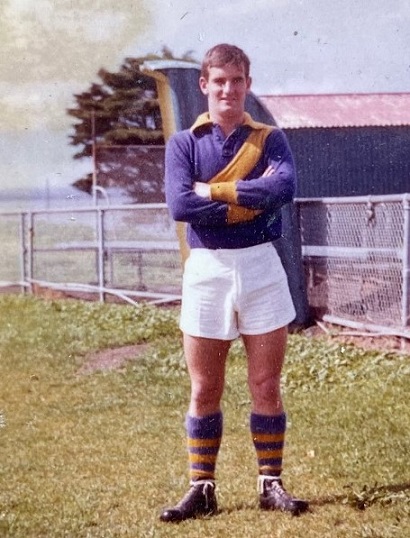 John Raffle, captain of the Thirds in 1965 as well as treasurer. 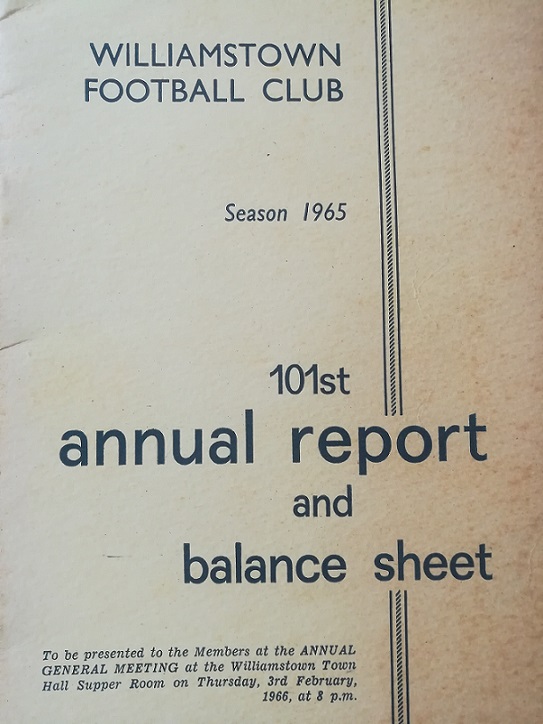 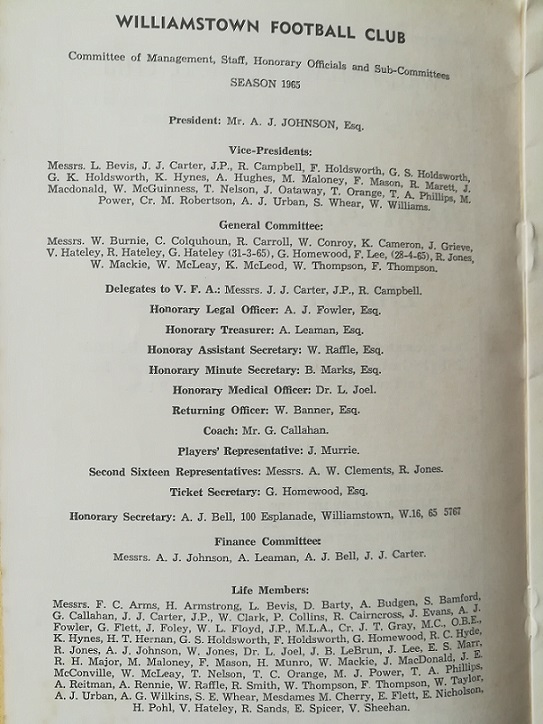 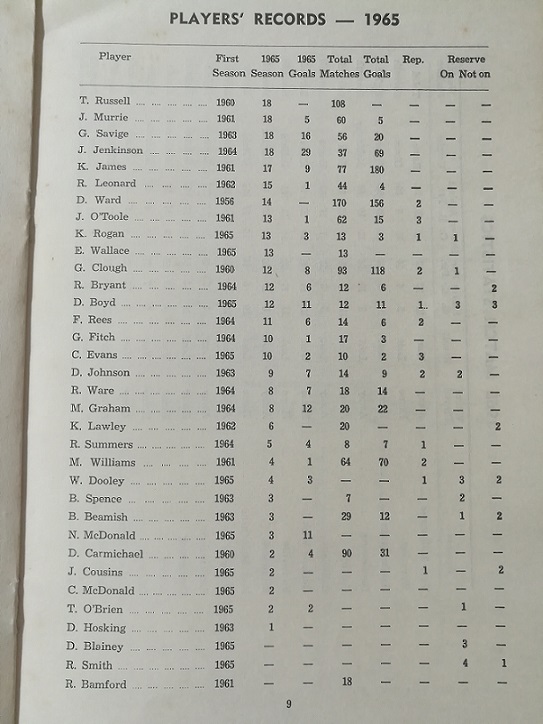 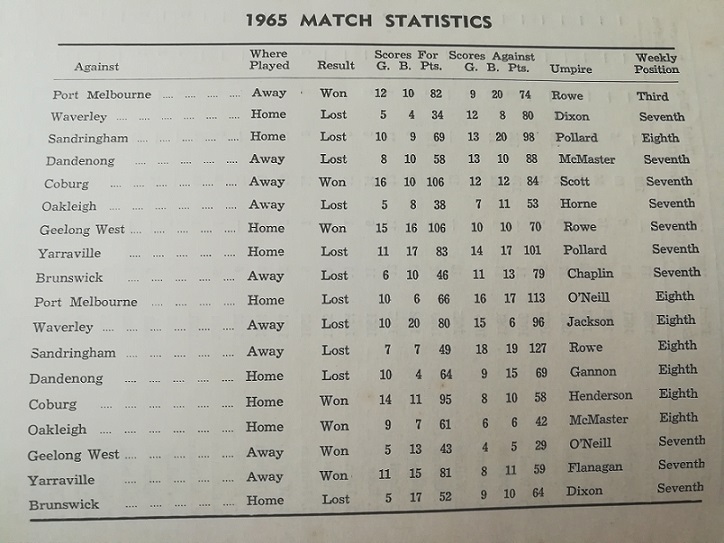 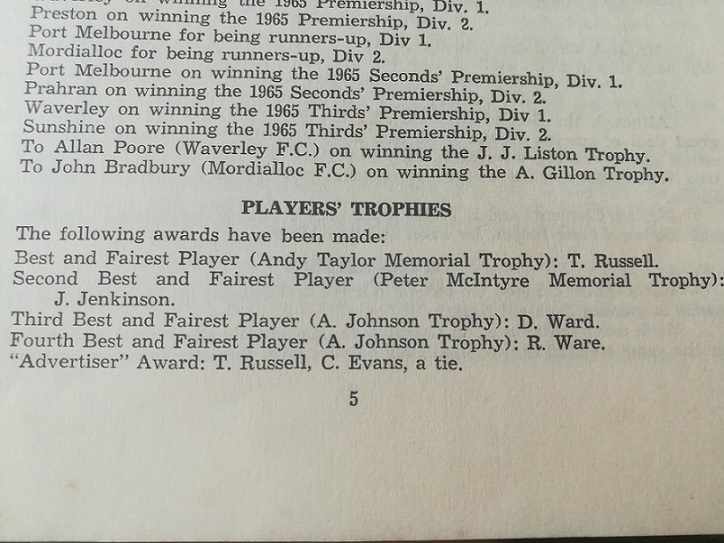