The early 1960's was a controversial time for Victorian football, and 1963 would be no different with the relationship between the VFA and VFL continually becoming strained. One major cause of the fall out was due to VFL clubs, particularly North Melbourne and St Kilda, looking to take over some VFA football grounds.

Arthur Johnson entered his sixth year as president while Gerry Callahan was once again coach for the sixth successive year, the last four as non-playing, with Daryl Ward captain and Lindsay Murphy vice-captain. Ruckman, Ken Barnes, was the major loss from the 1962 playing list as he went to try out with South Melbourne after three games of the season. On the field, the Seagulls were having their own battles, with the club finishing 8th and winning just six games from 18, with a draw against Dandenong. The draw was the first home Sunday fixture for Williamstown, played on August 4 on a wet and windy day and which saw police come onto the ground in an attempt to stop the players brawling. The game attracted a crowd in excess of 6,000 despite the inclement weather. It was the lowest finish since 1938 when the team ended up twelfth, and last, on the ladder with just two wins. It was also the first time since 1938 that neither Port Melbourne or Williamstown appeared in the finals.

Potentially still reeling from the experienced losses of Ray Smith and Jack Evans and unable to attract older and experienced key position players, the Club commenced the season with several players promoted from local junior competitions, such as Dave Johnson and Bruce Gibbs, coupled with ex-VFL players, George Savige (who played 17 of the 18 games and won the best first-year player award) and Barry Beamish, both from Footscray, and Jim Fogarty of South Melbourne. The Club embarked on a 'team building' policy, which resulted in losses in the first three games to Moorabbin, Brunswick and Northcote, albeit the last two by narrow margins, for the first time since 1937 when the first six were lost. 1952 was little better with just one win in the first seven rounds. Four victories in the next five games followed and, after the nine-goal round 12 victory at home against Northcote, the team was in fifth position on the ladder. However, five losses and the draw in the last six games meant an eighth place finish, with just six wins and the draw, and the Seagulls' record run of ten consecutive finals appearances was ended, its worst result for a quarter of a century. Only Brunswick and Northcote were below the Seagulls on the ladder at the completion of the home-and-away rounds.

Ruckman Leo Maloney had a fine season, winning the Andy Taylor Memorial Trophy for best and fairest from captain Daryl Ward and Greg Taube, ran fifth in the JJ Liston Trophy and won both the Advertiser and Chronicle best player awards. Keith James kicked 42 majors to win the goalkicking and finished third on the VFA list, just two behind Bob Bonnett of Port Melbourne. The team kicked a total of 190 goals and 187 behinds (1327) against the opposition's 190 goals and 247 behinds (1387), resulting in a reasonably high percentage of 95.7 for a team finishing eighth with just six victories. Others to kick ten or more goals during the season were Leo Maloney and Graham Clough (23), George Mazouris (19), Bobby Turner (16) and 'Boner' Jones (10). Captain, Daryl Ward, Leo Maloney, Greg Taube, Tommy Russell and Graham Clough were the only players to appear in all 18 encounters during the course of the year. Tommy Russell was voted most consistent player for the year, while George Savige was awarded the best first-year player. Captain Daryl Ward won the best utility trophy and the most improved player was considered to be Ken Lawley. George Mazouris was awarded the best clubman trophy.

The Reserves, once again under the control of captain-coach Neville O'Connor, won only half their matches but finished just one game out of the final four after being in it for 15 of the 18 rounds and only dropping out after the second last game. 46 players were used by the Reserves during the season, of which 15 were first-year players. 5 players were also called up from the Thirds. Former senior player, Laurie Davies, was vice-captain, and he and Des Hosking played every game of the season. Gary Fitch and Brian Spence played 17 games, missing only one match. Ron Leonard played only eight games, to go with nine senior appearances, but won the best and fairest in that grade from John McConville with John 'Jocka' Mellis and Ray Johns tied in third place. Bruce Gibbs was considered the best first-year player. Mellis was awarded the Roy Smith Trophy for the best full-back in the VFA Second grade, the fourth time that a Williamstown player had been the recipient after Bill Turnbull in 1948/49 and Dick Roberts in 1955.

The Thirds finished seventh, winning 8 games out of 17, under the coaching of Wally Ward, father of senior's captain Daryl Ward. Kevin Dooley won the best and fairest in that grade. John Grieve commenced his long reign as secretary of the Thirds in this year.

Former President of 1945-1946 and vice-president from 1938-41 and 1947-63, Bill Dooley, passed away on August 19 at the age of 64 after a long illness. Dooley was a bookmaker who first became involved with the Club in 1938 when he joined the committee but was unable to attend most of Williamstown's games due to Saturday race meetings. He also served as a VFA vice-president in the late 1940's and early 1950's and was involved in a lot of charity work for which he received an MBE. He was also instrumental in luring Ron Todd to Williamstown from Collingwood in 1940 and regaining his services in 1945, as well as the recruitment of many other players, including Harry 'Soapy' Vallence, Eric 'Tarzan' Glass and Des Fothergill. Former vice-president from 1956-62, Herb Worlley, also passed away in January, 1963, at the age of 55. He was the husband of Ethel Worlley, who was on the Ladies Committee for many years since 1946 and who also passed away in 2004, and the father of Rolda Burnell, who was heavily involved in the Club's fightback from a merger with Werribee in 1995. Long-time vice-president, Joe Connery (1947-63), was another to pass on during the year, as did Bert Paterson (committeeman 1936-40, vice-president 1949-51). Dooley, Paterson and Connery were all life members of the Club. Another life member to pass away was Claude Tomkins, a committeeman in 1928 and vice-president 1929-1933. He also served as president of the Seconds from 1945-50 and as vice-president.

The grandstand at the Williamstown ground was named the W.L. Floyd Pavilion in 1963 in honour of the former football club secretary (1935-1939, 1945-1946 and 1948-1949), Williamstown councillor and State MP for the district. The plaque that still adorns the grandstand was unveiled by Mayor, Alexander Knight, in a ceremony before the round 2 home game against Brunswick. Larry was the brother of life member Myrtle Deller and uncle of Janet Dooley, and saw his first game at Williamstown in 1921 when the Seagulls took on Essendon Town in their last season in the VFA.

Committeeman from 1959, George Homewood, and vice-president from 1958, Fred Holdsworth, who were also both social secretaries, were made life members at the annual general meeting in respect of the 1962 season held earlier in the year. Homewood continued as a committeeman until the end of the 1965 season, while Holdsworth was a vice-president until the end of 1968. Trainers, Bob Cairncross, who commenced in 1952 and finished in 1971, and Bill Taylor, who started in 1954 and finished up at the end of 1964, as well as Mrs May Cherry, due to ten years service to the Club's ladies committee, were others to be honoured with life membership.

The end-of-season trip to Wagga was enjoyed by a party of 29 players, trainers and officials.

Geelong West was admitted to the VFA in 1963 and won 3 games and finished second-last in second division but did provide the winner of the competition best and fairest, the J. Field Medal, which went to Dick Perry. The club would go on to win the second division premiership in 1964.

The ABC, and sometimes commercial channels, televised parts of VFA games during the season. 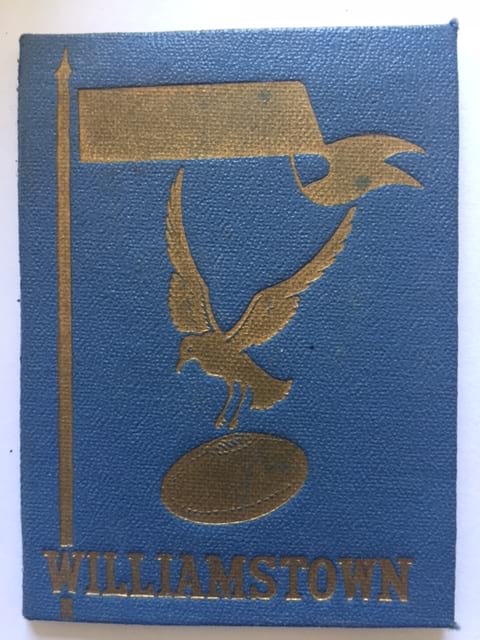 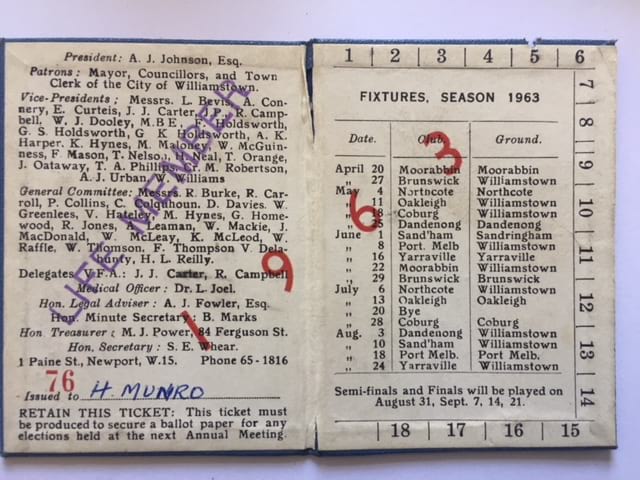 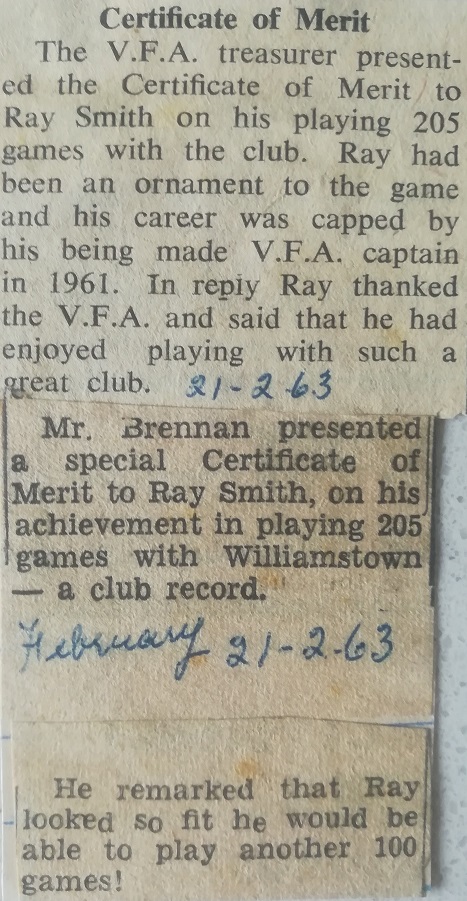 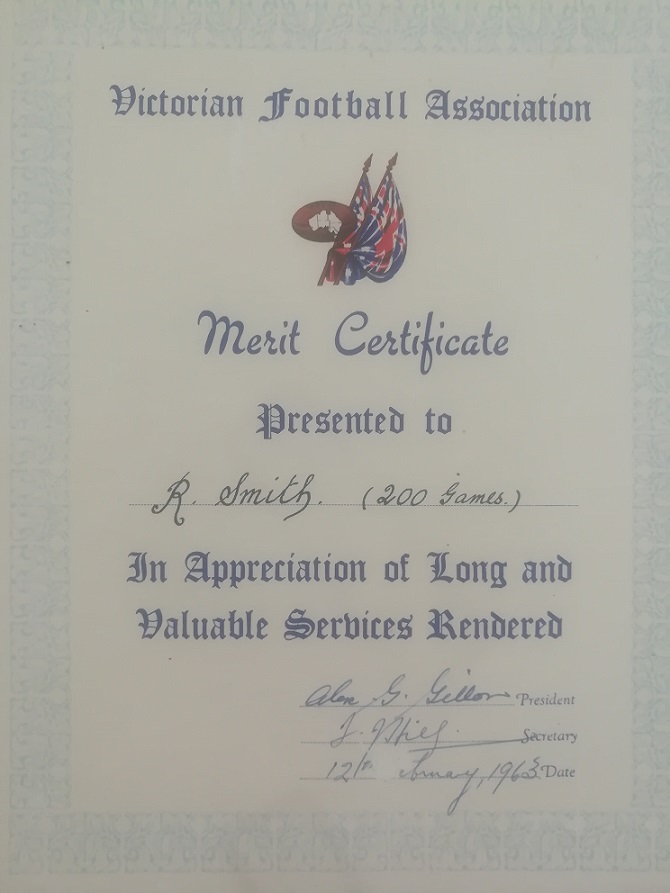 Certificate of Merit presented to Ray Smith in February 1963 by the VFA for playing 200 games of senior football. 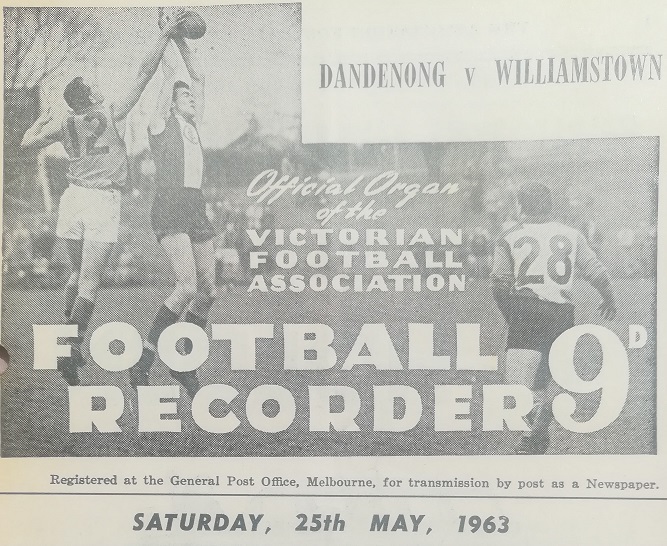 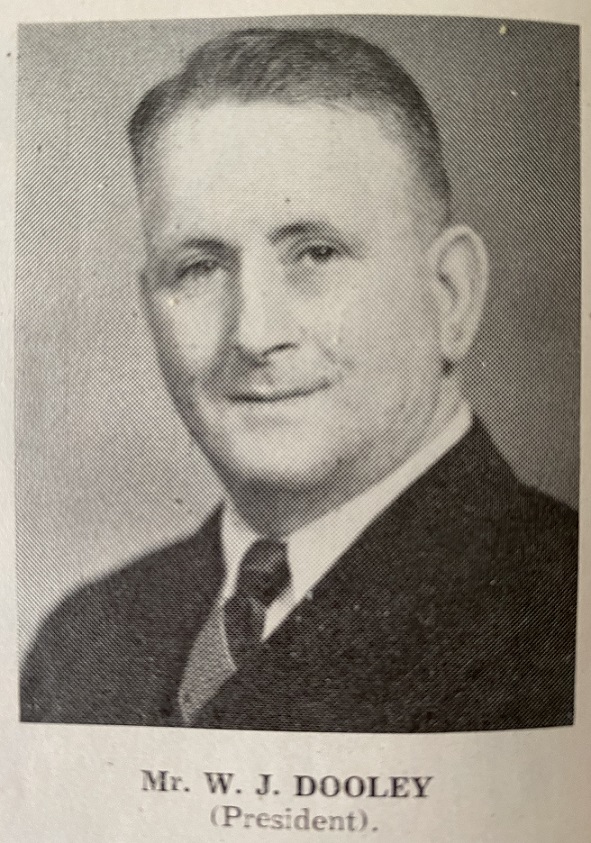 Former President of 1942-1946 and vice-president from 1939-41 and 1947-63, Bill Dooley, passed away on August 19 at the age of 64 after a long illness. Dooley was a bookmaker who first became involved with the Club in 1938 when he joined the committee but was unable to attend most of Williamstown's games due to Saturday race meetings. He also served as a VFA vice-president in the late 1940's and early 1950's and was involved in a lot of charity work for which he received an MBE. He was also instrumental in luring Ron Todd to Williamstown from Collingwood in 1940 and regaining his services in 1945, as well as the recruitment of many other players, including Harry 'Soapy' Vallence, Eric 'Tarzan' Glass and Des Fothergill. 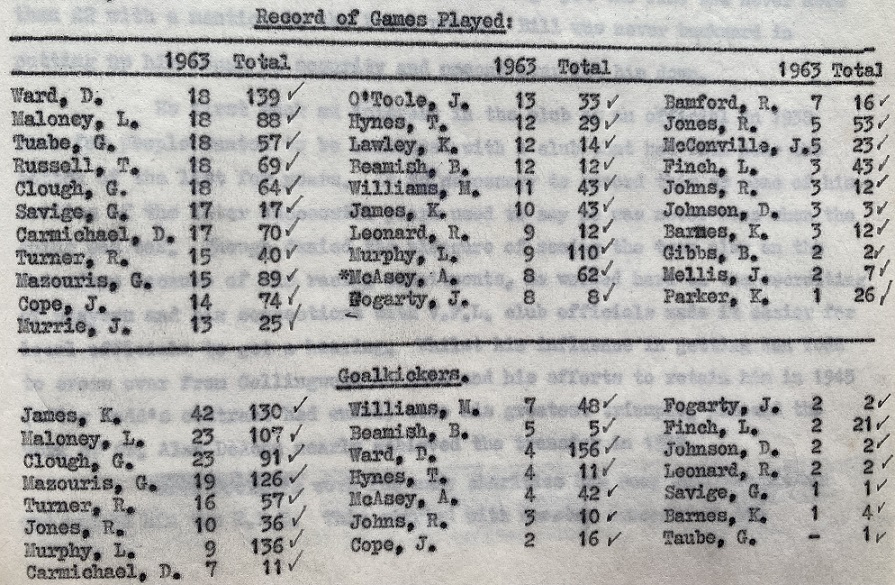 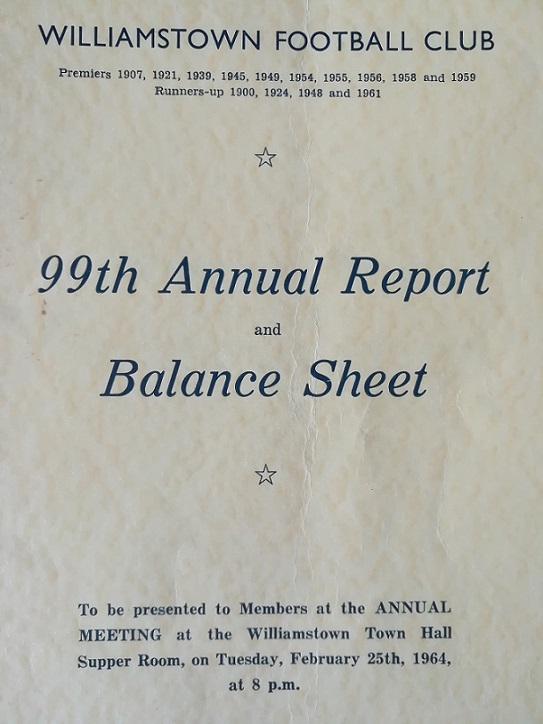 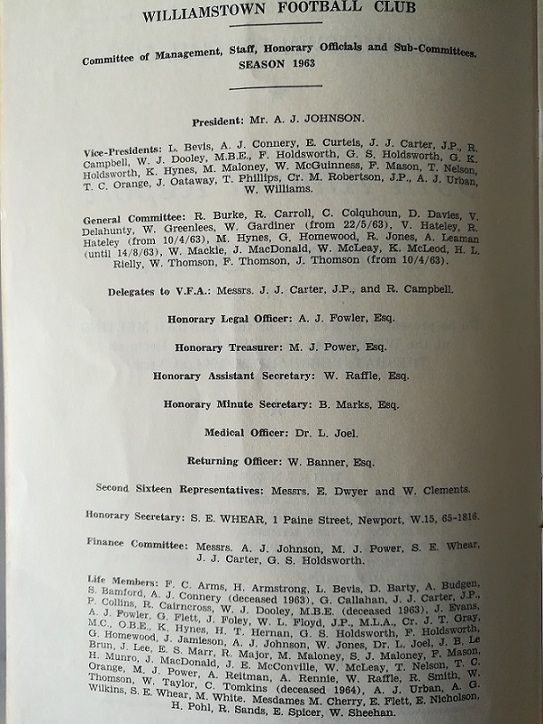 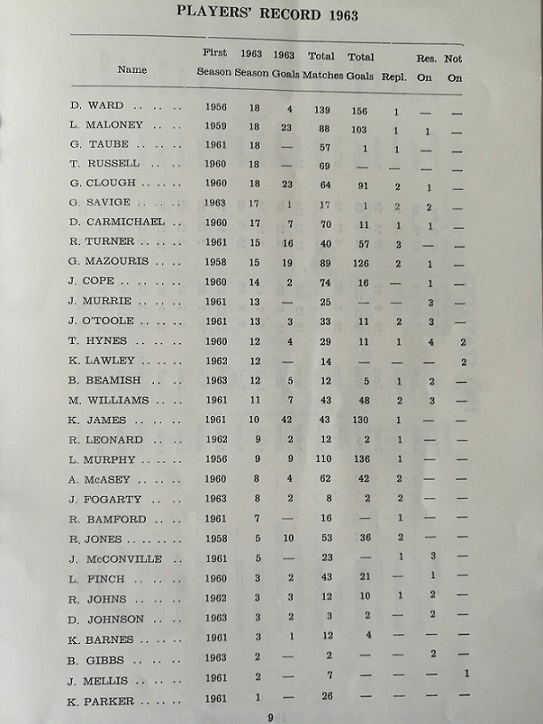 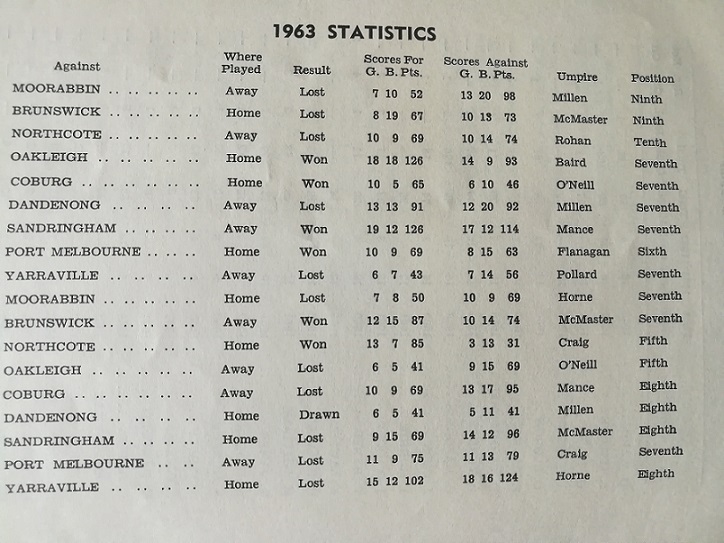 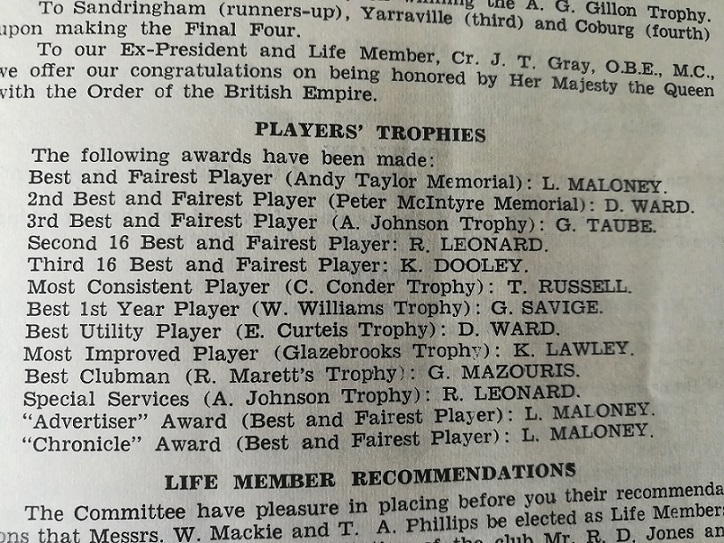 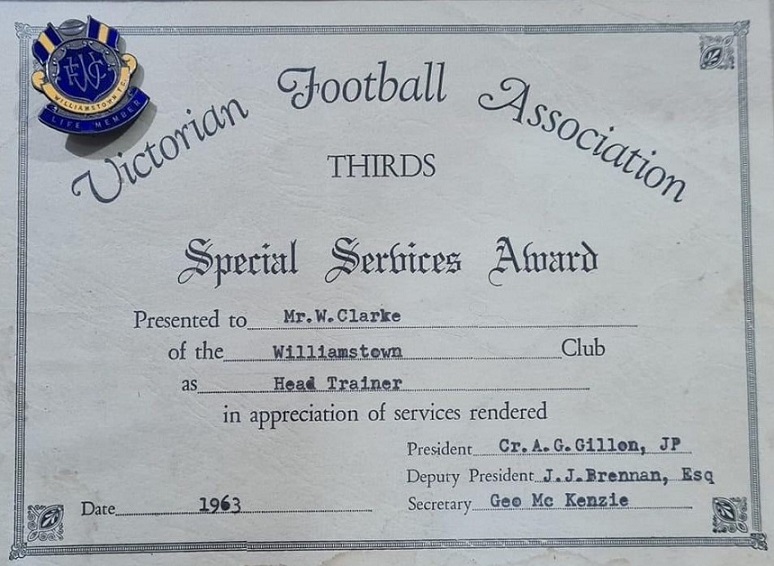 Certificate presented to Wally Clarke by the VFA in respect of his long service as a trainer with the Williamstown Thirds.