The VFA's decision to split into two divisions was deemed a success after its first year in 1961, with better quality and closer matches being played across both first and second divisions.

The end of the 1961 season also saw a wealth of experience leave the club, with Williamstown champions Ray Smith (205 games, 162 goals) transferring to Cora Lynn and Jack Evans (171 games, 92 goals) departing for Newport as coach, while Bob Jones (130 games, 22 goals), Tom Pelly (63 games, 118 goals) and Col Colquhoun (55 games, 0 goals) were also missing from the 1961 line-up, although both Jones and Colquhoun had already retired during the previous season.

Many of the new players failed to make an impact, the best of them being local junior Ray Johns who managed nine games. Others to debut were another local junior in Ron Leonard, Ken Lawley, Des Hosking (Seconds & Thirds), Brian Spence (Port Melbourne), Peter Absalom and D. Spence. Gerry Callahan was re-appointed non-playing coach with Daryl Ward as captain in place of Smith, a role he would hold until the end of the 1966 season, with Morrie Collins vice-captain.

During the summer, fire had destroyed the press box which used to stand on the southern wing of the ground and with it went the last hand-rung bell to be used on a senior football ground in Melbourne. A new box was built in front of the grandstand, together with a siren for signalling the start and finish of each quarter. The scoreboard was also destroyed in a storm and was replaced with a smaller board by the Council. A new cyclone wire fence was also erected around the perimeter of the ground.

Supporters anxiety levels were tested in the opening three rounds, with a four-point loss at home to Yarraville (Keith James 5 goals), which failed to make the finals, a four-point win at Oakleigh followed by a two-point victory at Coburg (James 5 goals). A lucky win at Mordialloc followed in round 6 when Williamstown got home by 7 points despite being outscored by the home side when the Seagulls had the lead and the wind at the last change. After a 7-goal defeat in round eight at Port, ending the run of nine consecutive wins over the Borough, which left them in sixth position with 4 wins and 4 losses, the team then won eight and drew one of the next ten matches to finish third with 12 wins, 5 losses and the draw (against eventual premiers, Sandringham) from 18 games. The team only entered the four after the penultimate home-and-away game with a 12-goal win at home against Port (135-63, James and Merv Williams four goals each) while Coburg downed Oakleigh, 'Town's rival for a finals spot. A five-goal victory at Brunswick in the last home-and-away game secured the Club's tenth consecutive finals appearance, which was a VFA record, eclipsing the nine finals series achieved by both Port Melbourne and North Melbourne, during which time the Club won five premierships, once runners-up, three third placings and one fourth placing. Moorabbin headed the list at the completion of the home-and-away rounds with Sandringham only two points behind, courtesy of the draw with the Seagulls, then Williamstown followed by Coburg.

A considerable number of injuries were sustained in the heavy going and blustery weather experienced in the last home-and-away game against Brunswick, forcing the team to play in the first semi-final at St Kilda against a strong Coburg outfit with a much depleted side. Nonetheless, having beaten Coburg twice already that season, Williamstown were confident of victory, but wretched kicking for goal in the first half proved costly. Only two goals were kicked with the team's first 11 scoring shots and full-forward, Keith James, had plenty of opportunities but was goalless for the match, which was watched by 9000 spectators. The Seagulls kicked five goals straight in the third term to briefly take the lead and a good display was put on in a close struggle all day before the Seagulls went down by just seven points, 11.12.78 to 10.11.71, although the 'Burgers had led at every change. Carmichael, Cope, Williams and Murphy were best for 'Town.

John Cope won the Andy Taylor Memorial Trophy for best and fairest, from Graham Clough and Don Carmichael. Clough also ran sixth in the JJ Liston Trophy. Keith James booted 40 goals to run equal fifth place on the VFA list. The team booted a total of 227 goals and 224 behinds (1586) while the opposition posted 203 goals and 215 behinds (1433). Other players to kick more than ten goals over the course of the season were Graham Clough and Merv Williams (27), George Mazouris (23), Lindsay Murphy (20), Daryl Ward (18), Les Finch (17), Leo Maloney (14) and Bobby Turner (12). John Cope was the only player to appear in all of the Club's nineteen engagements.

Lindsay Murphy played his 100th senior game for the Club during the season. Ray Bamford and Ray Johns tied for the best first-year player trophy, Alan McAsey won the most consistent player award, Merv Williams was considered the best utility player, while McAsey also took out the Advertiser award and Graham Clough the Chronicle trophy.

The Club's Seconds, under captain-coach Neville O'Connor, finished fifth, missing the finals by percentage only. Ken Barnes was awarded the Reserves best and fairest trophy. A new administration took control of the reserves in this season after Harry Dyson (president since 1951), Gordon Drew (secretary since 1944) and Dave Palmer (treasurer since 1945) all stood down after the completion of the 1961 season. Ern Dwyer, Max Chamberlain and Ian McLeod took over those positions, respectively, in this season.

Williamstown thirds, coached once again by Wally Ward, father of senior's captain Daryl Ward, could only manage four wins and finished seventh. Haydn McAuliffe won the best and fairest in that grade, and would go on to play 105 games for South Melbourne from 1965-73, kicking 104 goals.

In the round 5 game at Sandringham on May 26, umpire Trewin awarded an astonishing total of 98 free kicks, the highest number ever in any VFA game, 82 of which went to the home side and only 16 to Williamstown. Not surprisingly, the Seagulls lost by 26 points that day, 13.12.90 to 9.10.64. In the return match at Williamstown, the Zebras had the game won but the Seagulls put in a magnificent finish to tie the game, 11.14.80 to 12.8.80, and prevent the first Sandringham win at Pt Gellibrand since 1951.

Club membership in this season was 329 adults and 37 juniors, a stark contrast to the 3130 members during the 1946 season, comprising 2780 adults and 350 juniors, but this followed the premiership in 1945 and Ron Todd's phenomenal 188 goal season.

Treasurer since 1959, Maurie Power, and assistant secretary since 1959 and committeeman in 1958, Phil Collins, were made life members at the annual general meeting in respect of the 1961 season earlier in the year. Gerry Callahan was appointed coach of the VFA representative team that played Tasmania in Devonport in June, which the Association won by 6 points, 12.15.87 to 12.9.81. Future Williamstown captain-coach, Max Papley, then with Moorabbin, kicked four goals and featured in the best players.

Full-forward of 1904-05, Len 'Mother' Mortimer, passed away on November 2, aged 76. He played 31 games and kicked 67 goals for Williamstown, and in 1905 he became the first 'Town player to head the VFA goalkicking list with a total of 48. He was recruited by South Melbourne in 1906 and played 153 games and kicked 289 goals up until the end of 1915. He played in South's first VFL premiership team in 1909 and topped the goalscoring in each of his first seven seasons.

The end-of-season trip to Yarrawonga for the second consecutive year was enjoyed by a party of 32 players, trainers, supporters and officials.

After playing at Sandringham in 1961 due to Elsternwick Park being top-dressed, Brighton lost the use of its oval to soccer and then merged with a club from Caulfield and played at South Caulfield under the name of Brighton-Caulfield in 1962 but again finished on the bottom of the ladder. After 50 years of senior football, the end was in sight for the grand old club. 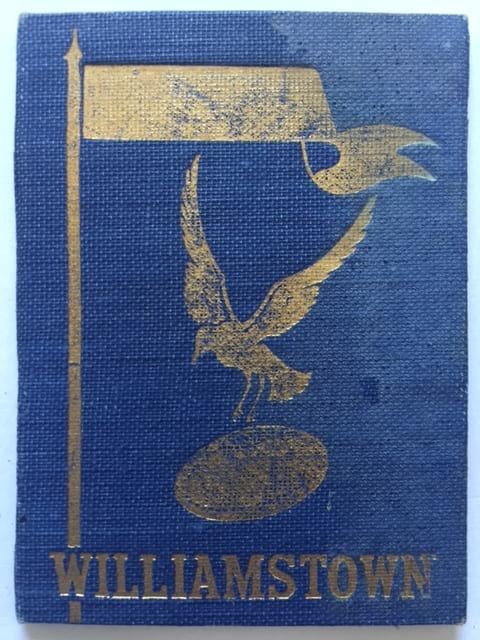 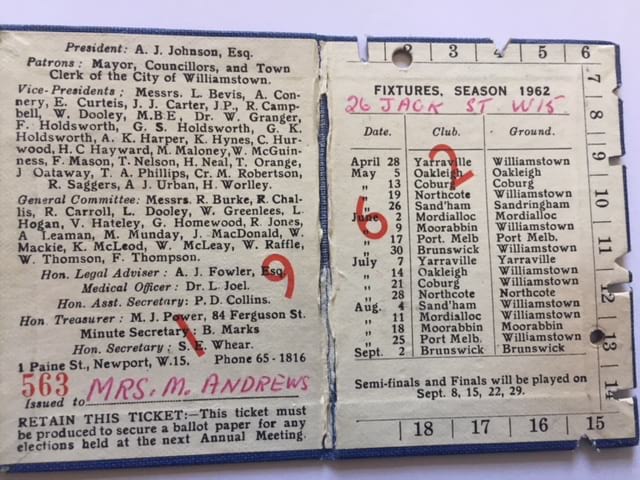 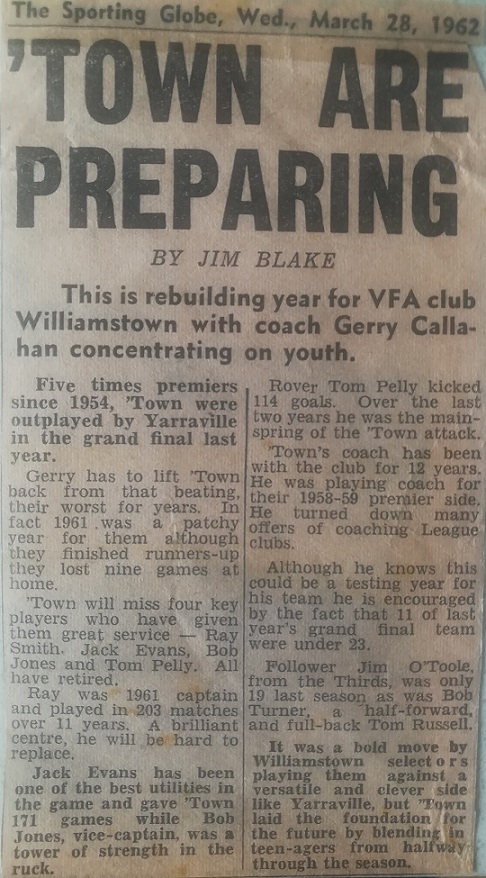 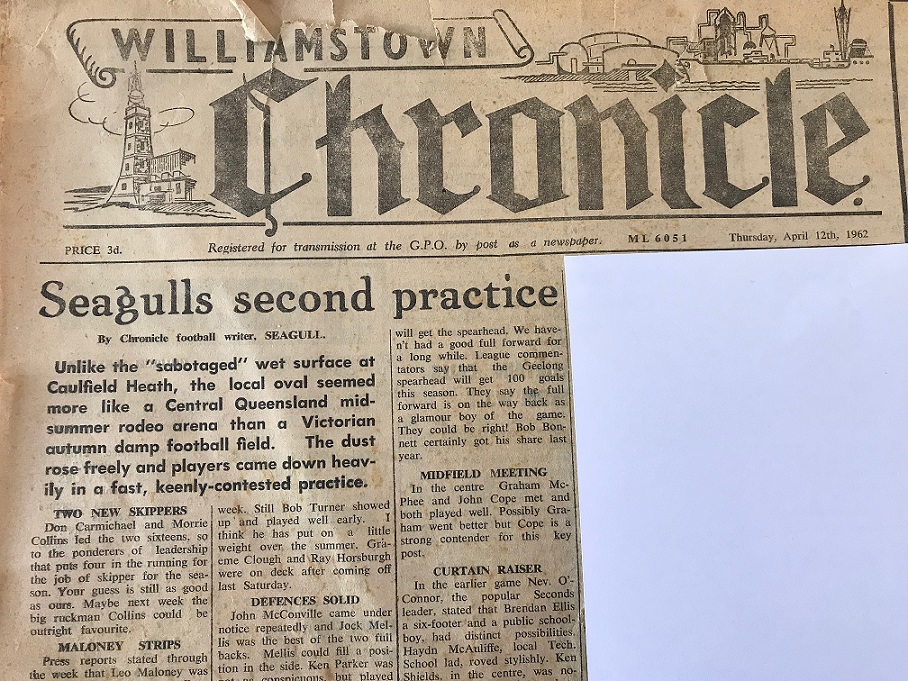 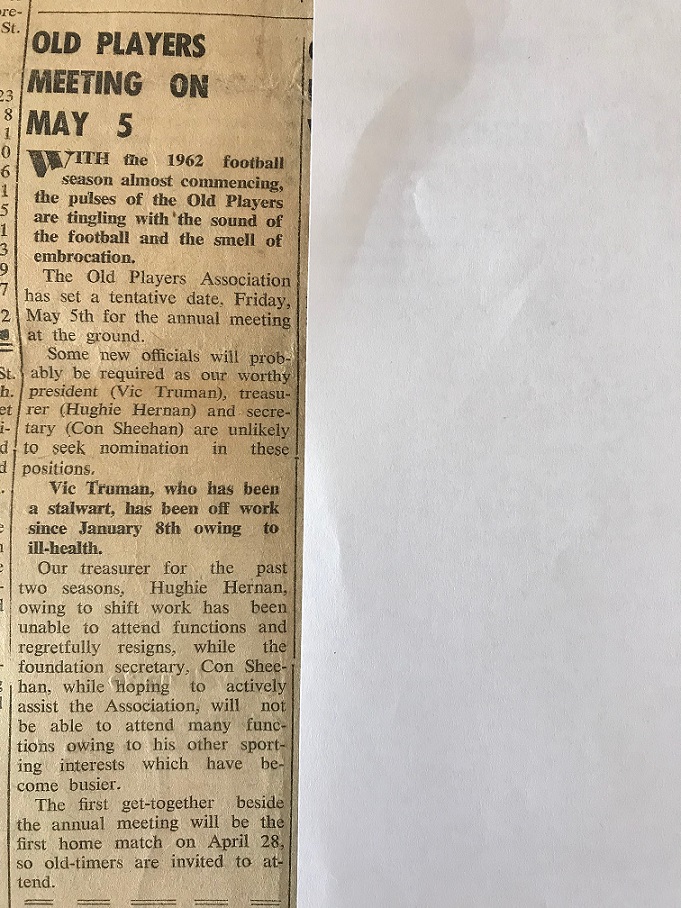 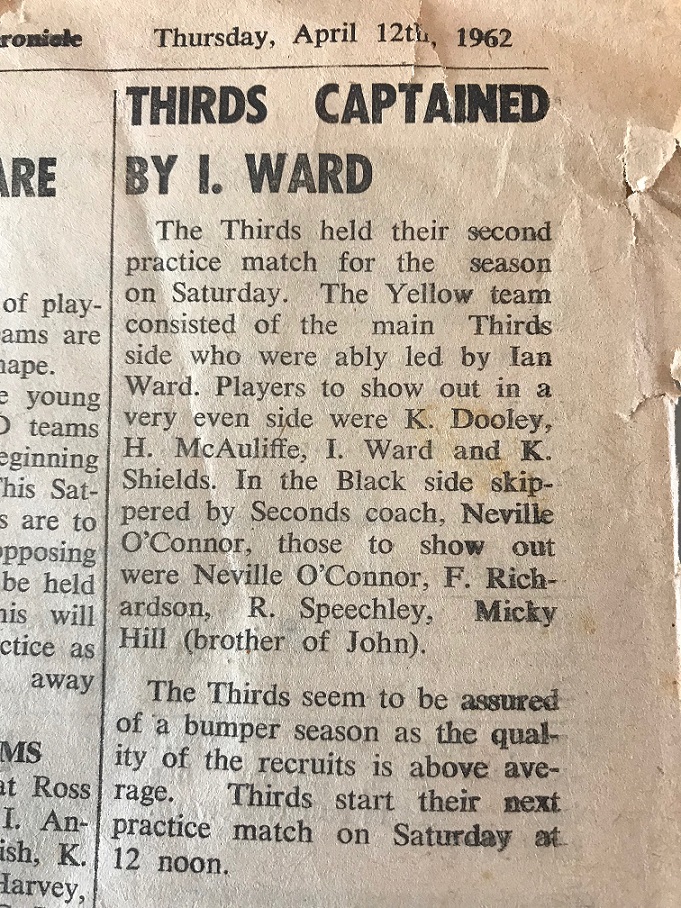 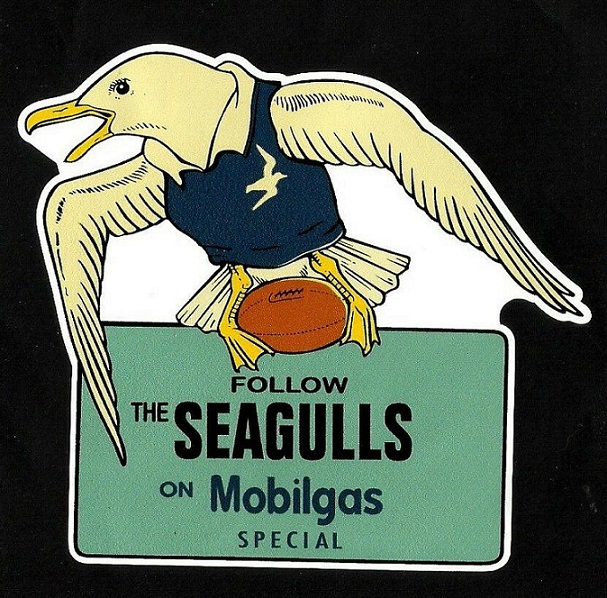 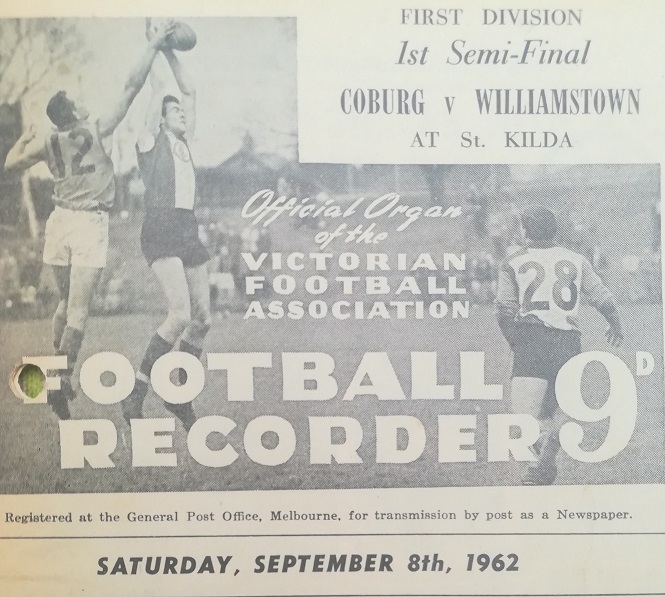 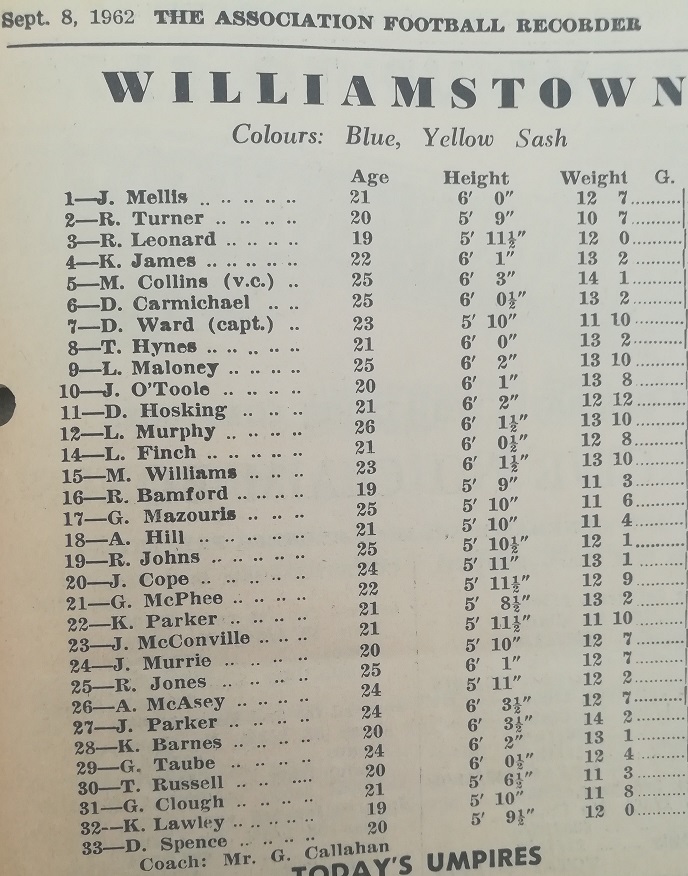 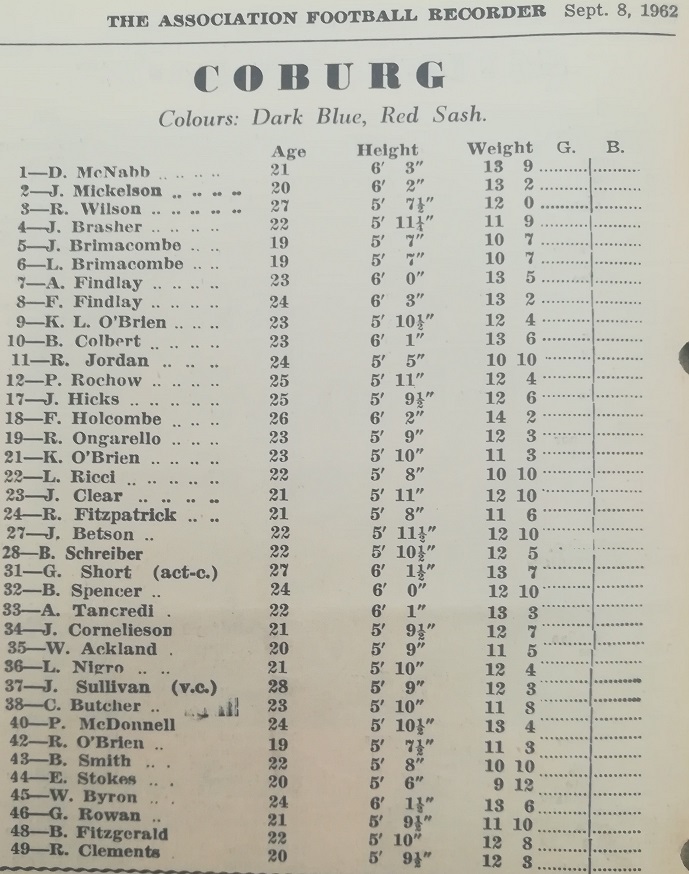 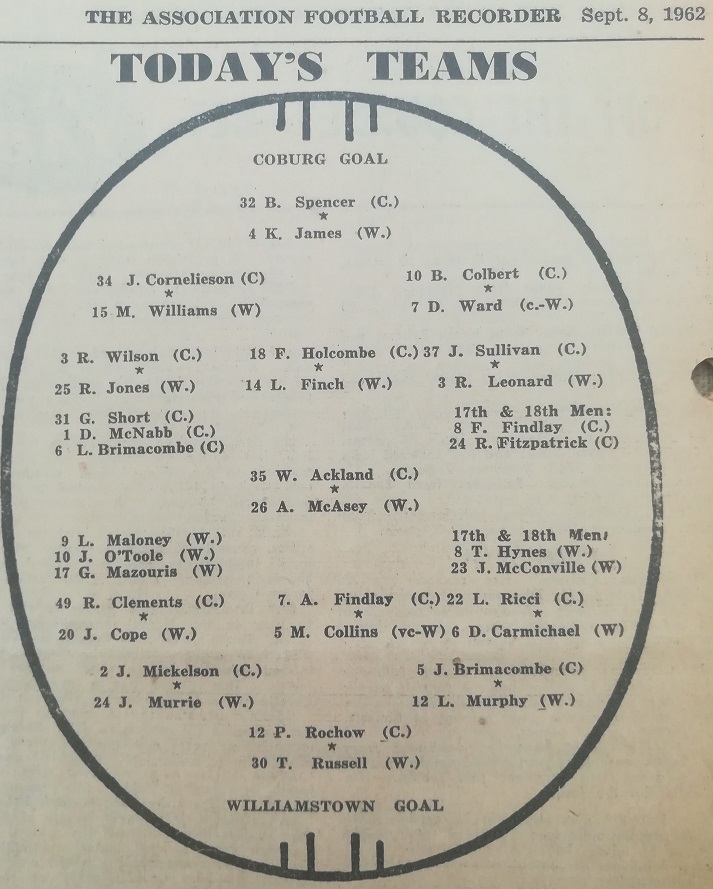 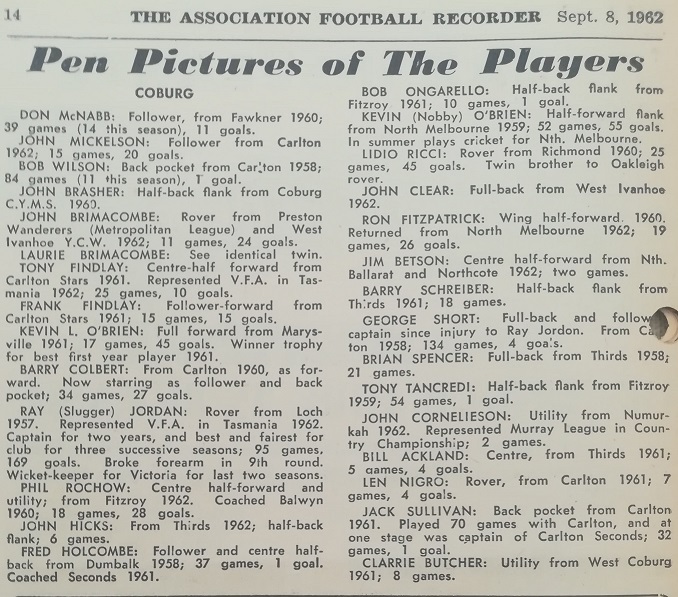 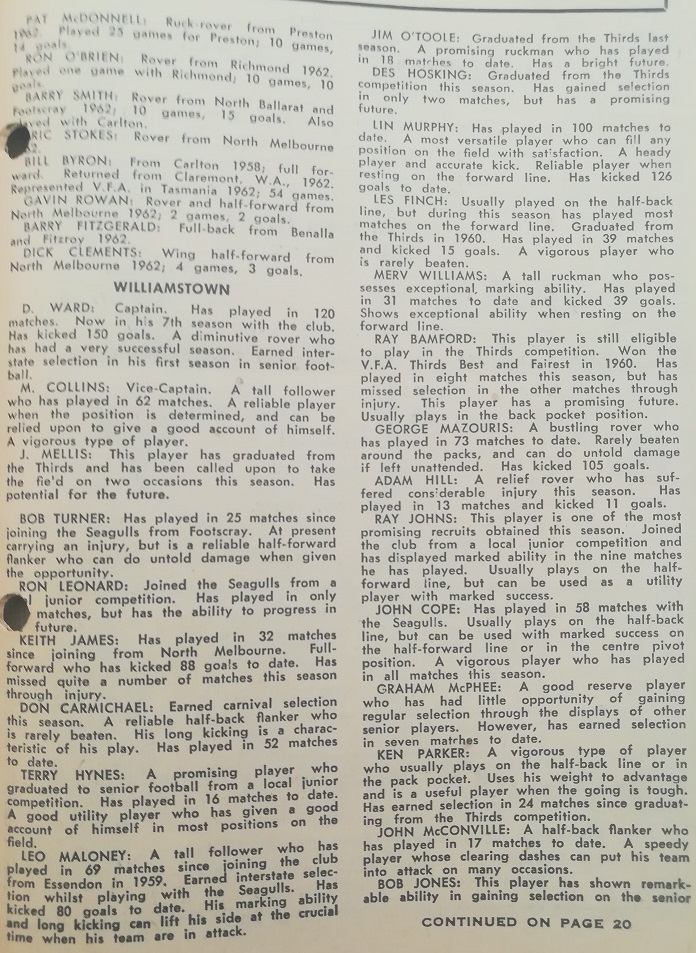 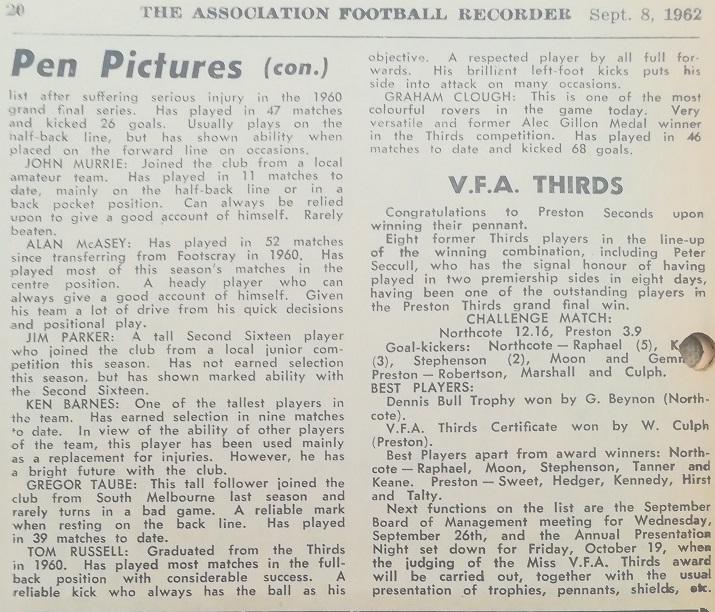 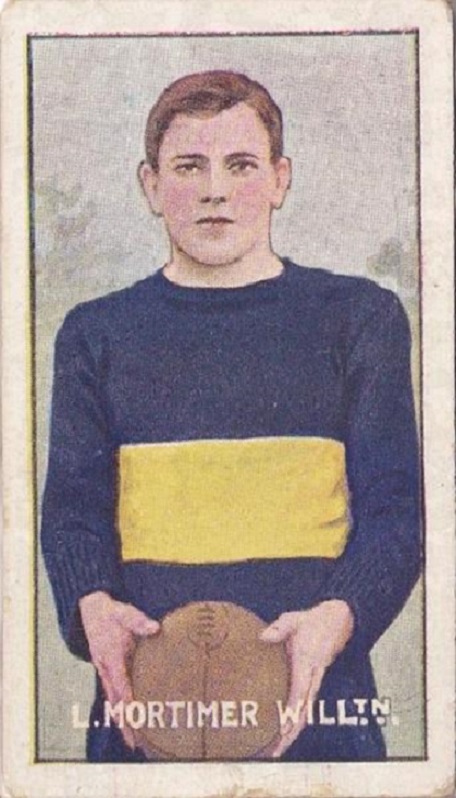 Full-forward of 1904-05, Len 'Mother' Mortimer, passed away on November 2, aged 76. He played 31 games and kicked 67 goals for Williamstown, and in 1905 he became the first 'Town player to head the VFA goalkicking list with a total of 48. He also booted 29 goals for the year in 1904, the highest total since Ernie Warren's 30 in 1886, including 6 goals out of 8 against Preston at Williamstown in round 16 in a 34-point victory. He was recruited by South Melbourne in 1906 and played 153 games and kicked 289 goals up until the end of 1915. He played in South's first VFL premiership team in 1909 and topped the goalscoring in each of his first seven seasons. He became coach of Yarraville Juniors in 1916. 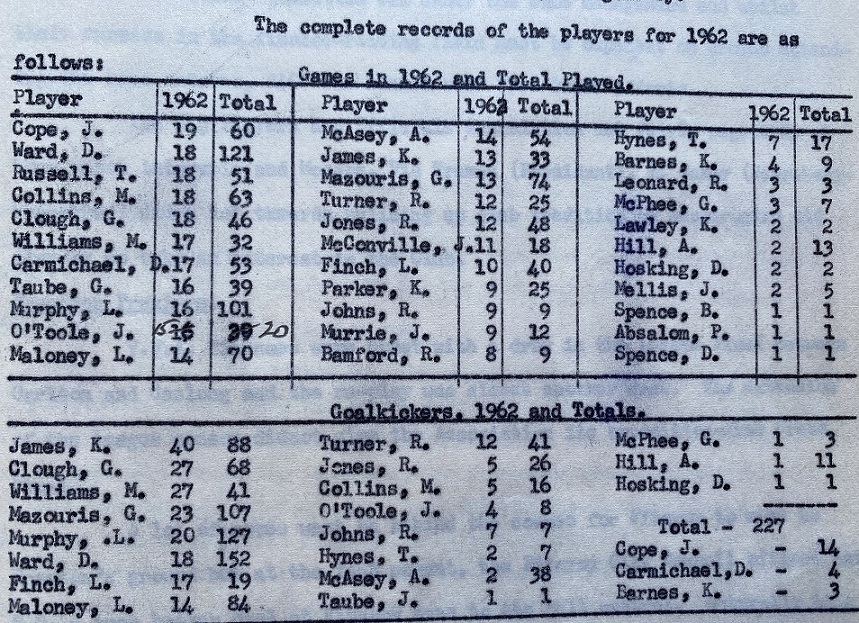 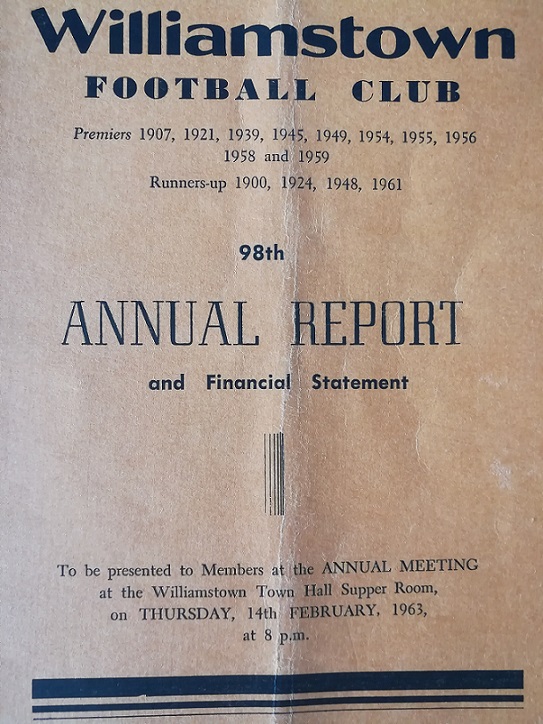 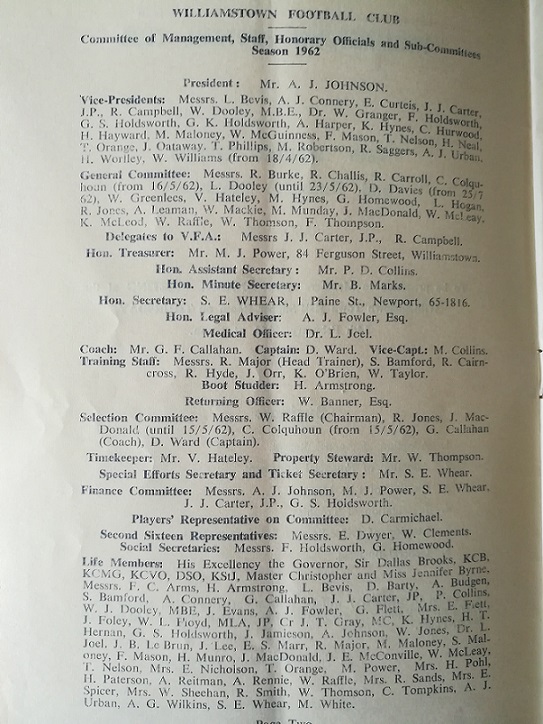 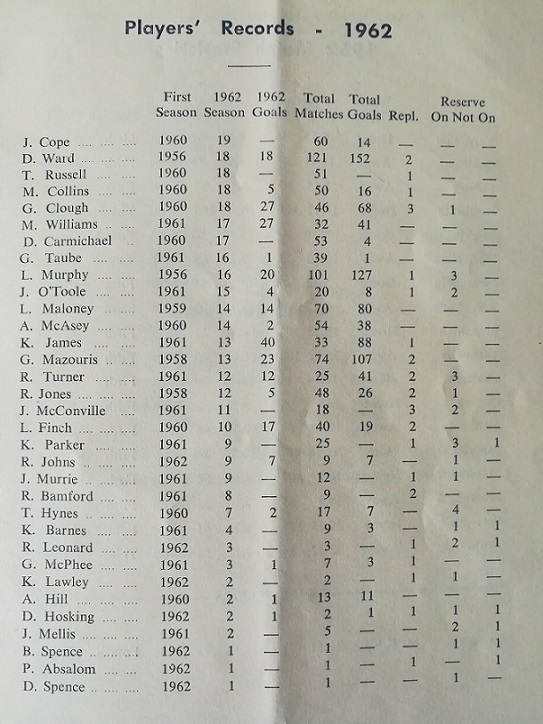 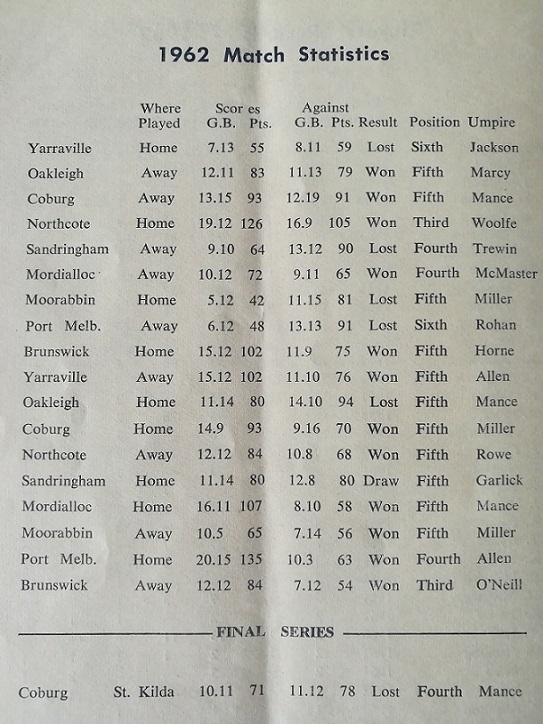 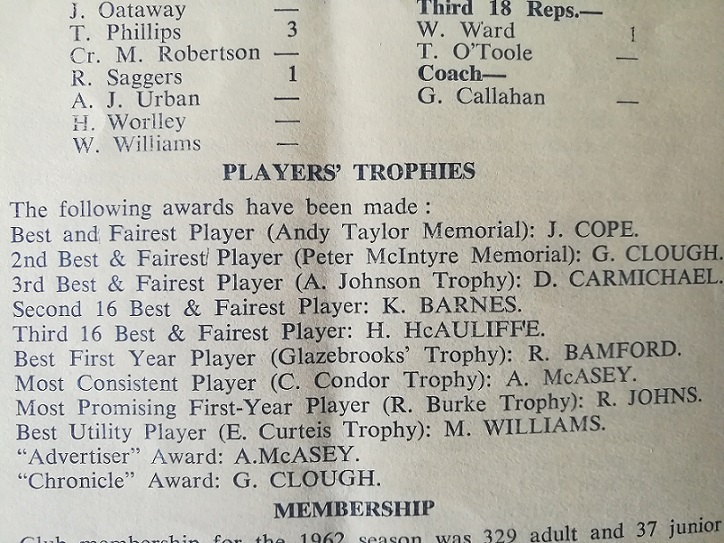