1961 saw massive changes sweep the Victorian Football Association. In December 1960 the league made the radical move to split the competition into two separate divisions with promotion-relegation in an attempt to eradicate one-sided games from occurring and also to give new clubs entering the competition the necessary time to adjust. This involved deciding on ten teams to operate in the first division (which included Williamstown) and eight for the second division, including new club Waverley. As the top level of VFA competition had to be divided, this was also the case for the seconds and thirds, which brought some complexities and the trophy list was doubled. Sixteen-a-side teams were maintained and the finals system reverted to a final-four.

Seagulls captain Ray Smith secured a three-peat of best and fairest awards from 1959-1961, becoming the only player besides Arthur 'Porkie' Sykes (1930-1932) to achieve this tremendous honour. He also won the Advertiser and Chronicle awards. The milestones didn't stop there for Smith, who also became the first Williamstown player to surpass 200 senior games late in the season. Bob Jones was made vice-captain following the transfer of Eric Beitzel to a coaching position at Numurkah but Jones was forced to retire after 11 games due to injury, giving him 130 matches in total, and was replaced by Jack Evans. Col Colquhoun also had to retire after one game, giving him 55 matches with the Club. Others who dropped out were Roy Cullinan (59 games, 178 goals), Laurie Davies (20 games, 31 goals), Ron Jones (21 games) and Barry Beitzel (48 games). Neville O'Connor (32 senior games) became captain-coach of the reserves and won the best and fairest in that grade.

The season opened with a rather fortunate 2-point win at Yarraville after trailing at every change of ends and, having won eight of the first ten games, with the team floating between first and third on the ladder, were victorious only five times over the remaining twelve rounds. This included going down to the bottom two teams, Mordialloc and Box Hill. On a particularly wet day in July at Yarraville, the Seagulls registered their lowest score since the three behinds kicked against Footscray in 1899 when they scored just 1.5 to the Eagles' 4.8, with Leo Maloney kicking the 'Town's only goal 20 minutes into the last quarter. The Seagulls just managed to hold onto fourth place, edging out 1960 premiers, Oakleigh. However, Port was beaten three times, Moorabbin (which headed the ladder) twice and both the Coburg and Sandringham games were good wins at Williamstown. The team finished with a 13-9 win/loss record in the 22-game season, the longest year since 1947.

Having to win three matches to take out the premiership, the team fought their way through the VFA finals series as underdogs, having lost the last home-and-away game at Sandringham by 3 goals. The result was reversed in the first semi-final but only due to a terrific last quarter by the Seagulls, after scores were level at 8.5.53 apiece at the last change. A four-goal to one final term saw Williamstown victorious, 12.7 to 9.8 (Bobby Turner 4 goals), with the best players Pelly, Parker, Turner, Collins and Smith. The crowd totalled 11,000.

The preliminary final against Moorabbin was a thriller from start to finish and George Mazouris, who was only included when Daryl Ward was injured, not only played a wonderful game but kicked his fifth goal right on the bell to give Williamstown a four-point win, 14.17 to 15.7. Best players were Carmichael, Finch, Mazouris, Evans and Maloney.

The grand final, played before a crowd of 20,000 on a warm day, was a dismal affair as Yarraville raced to a five-goal lead at quarter time, which was reduced to 14 points by the long break. However, the Eagles played an inspired third quarter to add 11 goals to just one by Williamstown to have the game in hand by the last change with a lead of 77 points. The margin was reduced to 63 points by the end of the game, 22.7.139 to 11.10.76, with Williamstown's Graham Clough kicking four goals and being named best player, and Mazouris three. Other good players for the losers were Evans, Finch, Taube and McAsey. This was the only time that the two neighbouring teams met in a grand final. Ironically, Yarraville was captained by former Seagull, John McTaggart, father of future Williamstown captain, Brett McTaggart. John played 11 senior games from 1954-57, and won the best and fairest in the Reserves in 1957 and was runner-up in the 1956 premiership season.  It was the highest score against Williamstown in a grand final and by far the worst defeat at St Kilda by a Seagull outfit. Yarraville won three of the four games played with Williamstown that year and deserved the win, the only loss being the lucky two-point win in round one.

The Grand Final marked the end of Ray Smith's long career with the Seagulls, which had commenced in 1951 and finished after 205 games and 162 goals, premierships in 1954, 1955, 1956, 1958 and 1959, captaincy in 1960 and 1961, and three best and fairest awards in 1959, 1960 and 1961. He finished third in the JJ Liston Trophy in his final season. Ironically, as captain, he introduced a rule that if a player didn't train he didn't play, but as a result of a change in his employment, Smith was unable to train so resigned from the Club at the age of 28, but continued to play at Cora Lynn in West Gippsland for the next four years. Runner-up in the best and fairest was vice-captain, Jack Evans, and Daryl Ward was third.

Leading goalkicker was first-year player Keith James, whose 48 majors put him equal fourth on the VFA list. Daryl Ward played his 100th senior game for the Club during the season, and Jack Evans his 150th.

Unfortunately the bad news didn't finish for Williamstown with the grand final loss. Early in the morning of Sunday, December 3 1961, the press box and storeroom at the Williamstown Cricket Ground was destroyed by fire, suspected to have been lit by vandals. Along with the building, the bell that was used to mark the start and finish of each quarter was also destroyed. Some would have you believe that the bell had come from the HMVS Cerberus while others maintained that it came from a yacht that was broken up at Knight's slipway. This was the last bell used at any major ground in Melbourne as the use of a siren could have caused confusion by the use of sirens on ships close to the shore, especially on foggy days (refer photos below).

Secretary, Stan Whear, completed his tenth year in the position, surpassing the nine years of Larry Floyd in three stints between 1935-49.

Fred Harden, who played from 1912-1921, and was a committeeman and selector for many years, passed away during the year.

The VFA procured a building in Jolimont Terrace during the year, that was to become known as VFA House and ended many years of rented premises in the city. 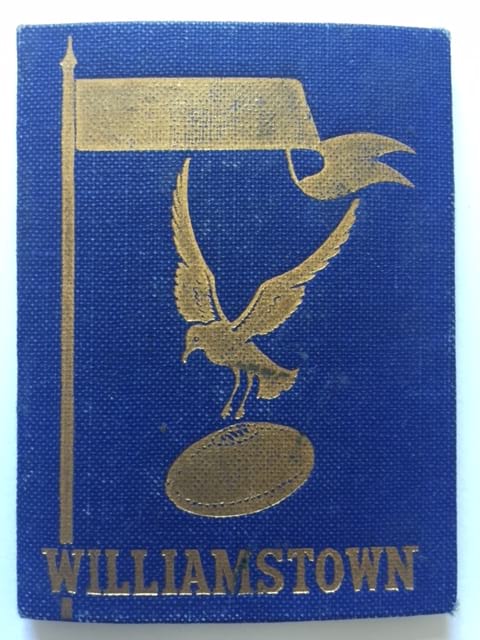 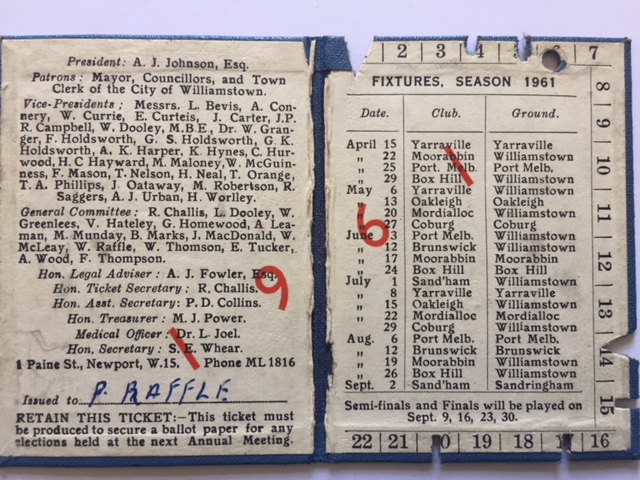 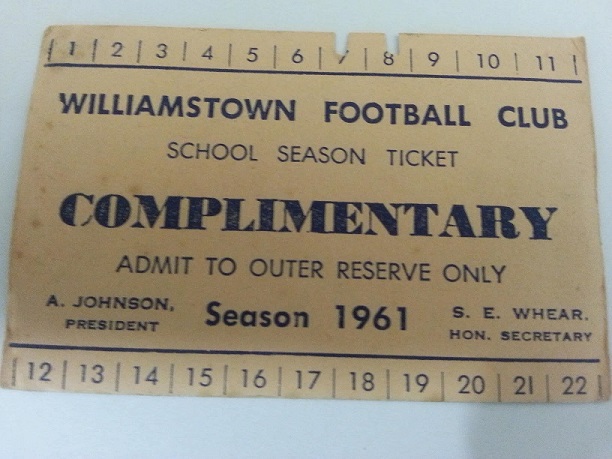 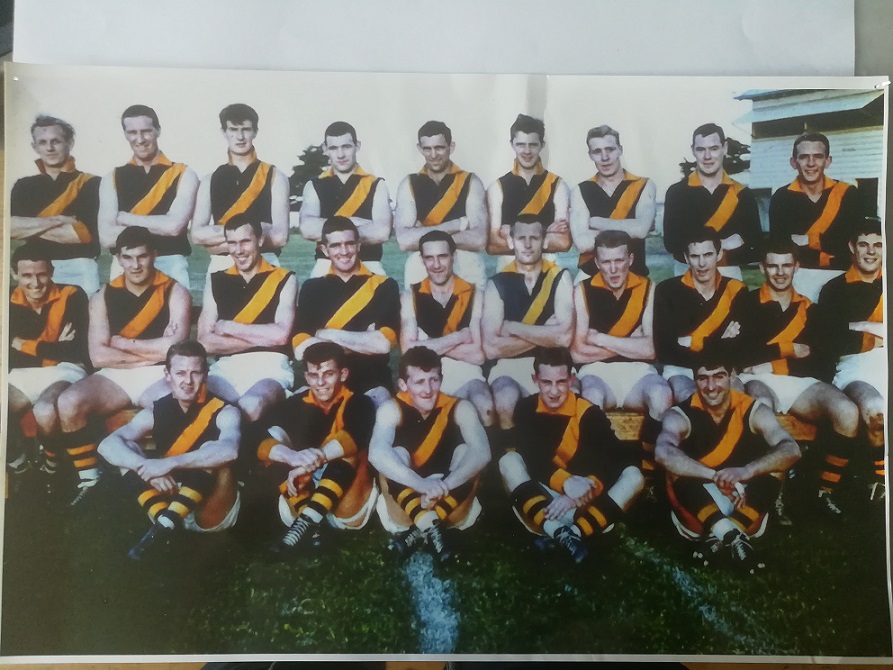 1961 Grand Final squad, picture taken at training on Thursday night before the game 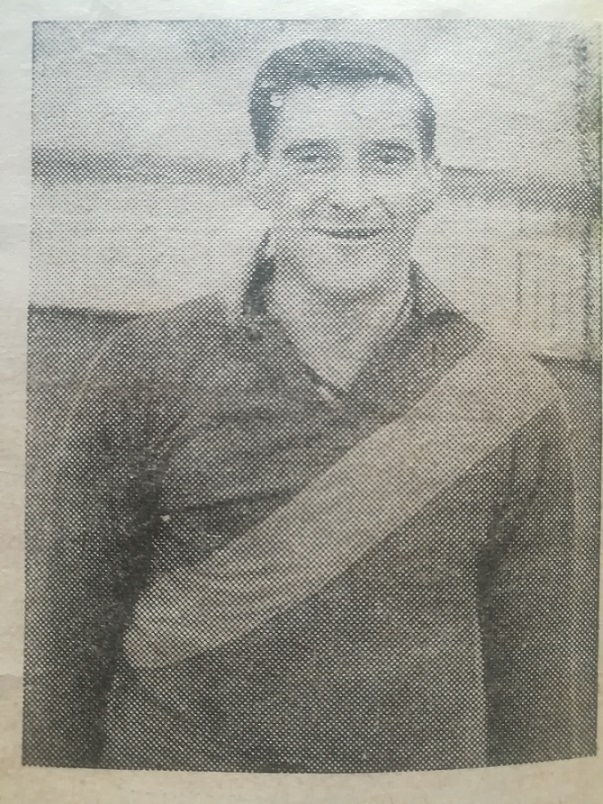 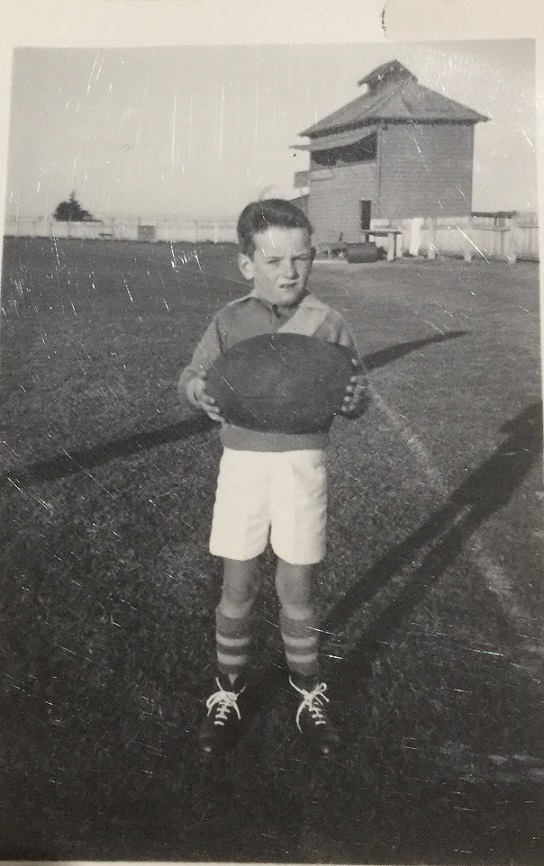 A young John Raffle, pictured in the 1950's, with the press box in the background 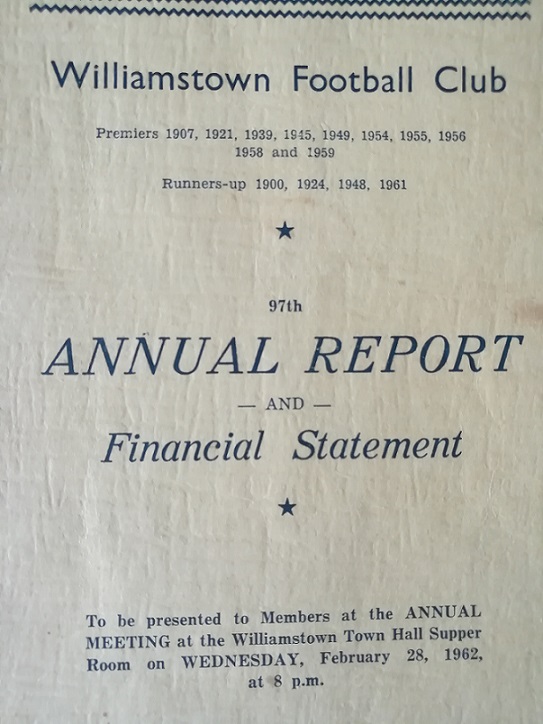 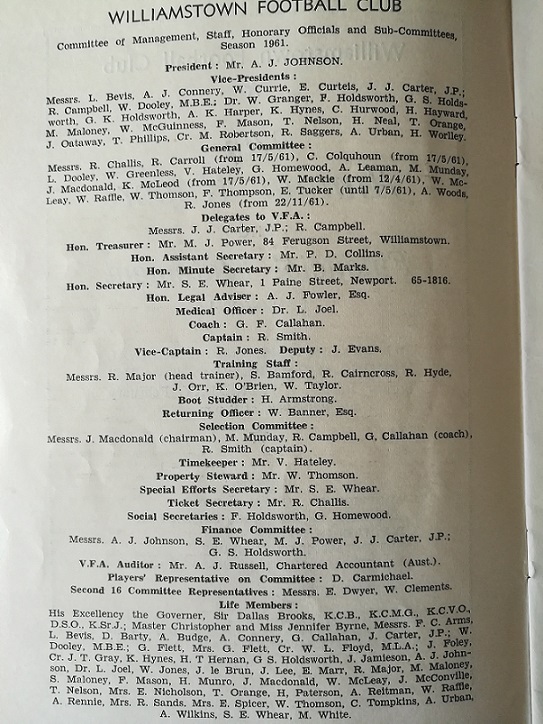 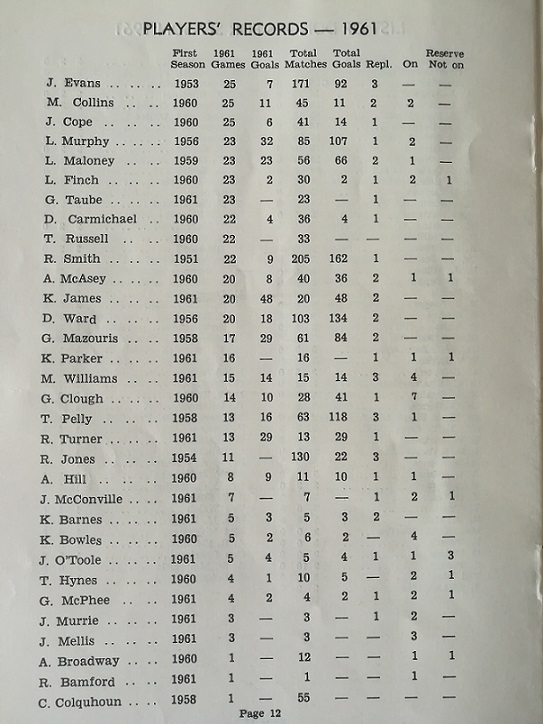 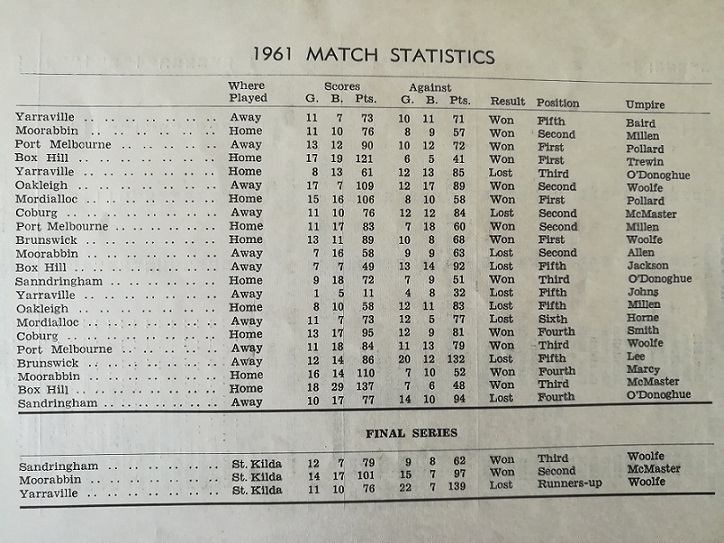 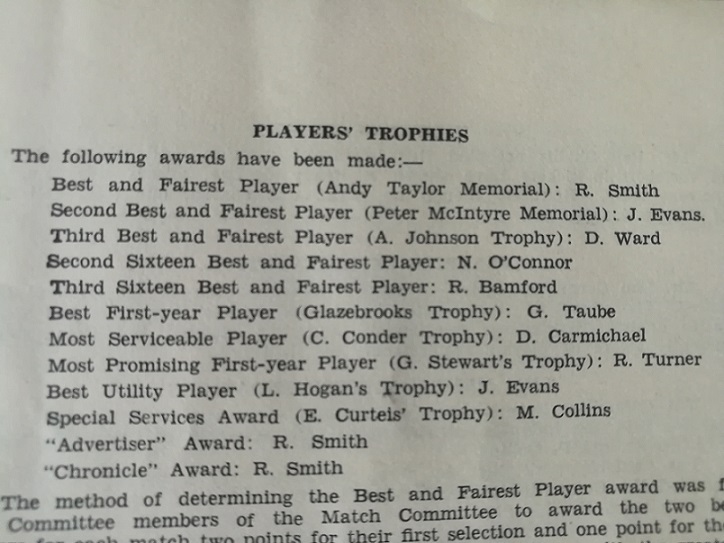