The 1960 season saw a major transition at the Seagulls, with legendary ruckman Gerry Callahan deciding to pull the pin on his playing career after 171 games, taking on a sole coaching role at the Club. Ray Smith was made captain with Eric Beitzel vice-captain. Others to depart included Don Matthews (19 games), John Ramsay (125), Len Kent (117), Laurie Anderson (8), Neil Whitaker (90), Alf Woods (20), Doc Menzies (4) and Vin Bourke (12).

1960 also proved to be a transition period for the Victorian Football Association itself, with the league moving some matches to a Sunday in an attempt to boost crowd attendances. This was to combat the ever-growing popularity of the then-VFL which had been impacting on the Association's audiences. The first game was played at Brunswick between the 'Wicks and Coburg on April 24 and attracted a crowd of 17,000 when VFL games were postponed due to heavy rain. However, Williamstown did not play a home game on a Sunday until 1963, preferring to hold revenue-raising after-match functions on a Saturday night and treat sore and injured players on a Sunday morning. Williamstown played two Sunday games, at Brunswick in round 4 and at Coburg in round 17, resulting in a 16-point loss and a 5-goal win, respectively. The Seagulls kicked only 5 goals in total against the Magpies, who did not make the finals, and all of those came in the second quarter. Any chance of victory was squandered by the 7 behinds only scored in the second half to the 'Wicks 6.1. Sixteen-a-side football was continued and the finals were to be contested by the top six sides due to the large number of teams competing, as, with Toorak Park fully available again, Prahran's re-admittance to the competition brought the number of teams to 17, just one short of the record number of 1887. The VFA reverted to a final four the next season when two divisions were introduced.

The season commenced with a two-goal loss to eventual finalist, Yarraville, at Williamstown after the unfurling of the Club's tenth premiership flag won in 1959, the Eagles first victory over the Seagulls since the 1-point, after-the-siren win in 1956. It was also the third time that 'Town had lost after unfurling a pennant following defeats by Brunswick in 1950 and Preston in 1955. They bounced back the next week to win by 4 goals at Port Melbourne and then had a 52-point victory over Preston at Pt Gellibrand in round 3. A crowd of 7,000 attended the Port game largely due to the fact that there were no VFL games because of the inclement weather but the ground was in such good condition that drop kicks were used all day. The team then found itself in unfamiliar territory in ninth place on the ladder after consecutive losses at Brunswick and to another finalist in Moorabbin at Williamstown. Some pride was restored with a big 70-point win at Sunshine and then a narrow 2-point victory against Coburg at Williamstown, the Lions' first loss of the season. After the round 8 defeat at Northcote, the Club found itself back in ninth position on the ladder with four wins and four losses and the season in the balance, especially with Leo Maloney and Ray Broadway suspended. This was the Dragons' first win over the Seagulls since 1954.

What followed was ten successive victories to round out the home-and-away season in fourth place on the seventeen-team ladder, 'Town's lowest finish for years but its eighth consecutive finals appearance, one behind the record of nine held jointly by North Melbourne and Port Melbourne. This run of victories included big wins at Prahran (69 points - Clough and McAsey four goals each), at home against Camberwell (73 points - Bob Jones 6 goals), at Yarraville (49 points), at home against Brunswick (55 points - Tom Pelly four goals), at home against Sunshine (65 points - Clough four goals) and at home against Northcote (72 points) in the final round. The Dragons had scored only two behinds to three-quarter time in this game and finished with 2.4. Ray Smith set a new Club games record when he played his 174th senior match in round 12 v. Port Melbourne at Williamstown, won by Williamstown 15.11.101 to 11.8.74. Smith, who dominated in the centre against the new coach of the Borough, former Fitzroy dual best and fairest winner, Don Furness, overtook the previous record held by triple premiership player and best & fairest winner, Colin Wilcox, who played 173 games from 1938-49.

Another victory followed in the first elimination final v. Coburg (12.10.82-6.11.47) before 9,000 people at the Junction Oval, who saw the Seagulls lead all day. Cullinan and Ward each kicked three goals while Carmichael, Eric Beitzel, Pelly,  Broadway and Murphy were the better players for 'Town. The first semi v. Yarraville was also played at the Junction Oval and drew a crowd of 8,000. Once again, Williamstown led for most of the match but the Eagles hit the front late in the game before Alan McAsey goaled to regain the lead while excellent ruckwork by 'Big Bob' Jones in time-on kept the ball out of play and prevented a Yarraville victory. Williamstown's inaccuracy also kept the scores close, with the final scores being 8.19.67 to the Eagles' 9.8.62. Roy Cullinan, Lindsay Murphy and McAsey each kicked two goals, while best players were Ray Smith, Eric Bietzel, Jones, Daryl Ward, Col Colquhoun, McAsey and Tom Pelly. The downside of the victory was a broken leg suffered by half-back flanker Bob 'Boner' Jones.

The Seagulls, who were missing big men Lindsay Murphy, Leo Maloney and 'Boner' Jones (all injured) while Tom Pelly was relegated to 18th man, then met Oakleigh in the preliminary final which was played in shocking conditions, with Williamstown registering only four goals before going down to the eventual premiers, 6.12.48 to 4.9.33, before a crowd of 8,000. Eric Beitzel, Ray Smith, first-year player Tom Russell and 'Big Bob' Jones were best for 'Town. Oakleigh, which went on to win the grand final against Sandringham by ten goals the following week, played their home games at Camberwell in this season while its ground was top-dressed.

While Williamstown were unable to add to their premiership tally in 1960, the club still finished with a very strong 14-4 win/loss record (16-5 including the finals), including twelve consecutive victories. It was the Club's eighth successive finals series, during which time five premierships were won and three third placings. The biggest milestone to come out of the season was champion player and first-year captain Ray Smith breaking the Club games record of 173 held by Colin Wilcox, in a season that saw him claim back-to-back best and fairest honours and finish fourth in the Liston Trophy. Wilcox missed three seasons during the war when the VFA went into recess. 'Big Bob' Jones was runner-up in the best and fairest award with Daryl Ward in third place. Jones won the Advertiser and Chronicle awards for best player.

Doug Kellett won the Seconds best and fairest while Allan Harris took out the Thirds award. The Reserves won all but three of the home-and-away rounds and two finals before ending the year in third place. The Thirds finished eighth with 9 wins and 7 defeats. Former multiple-premiership rover of 1954/55/56, 1955 best & fairest winner and three times leading goalkicker, Alby Linton, captain-coached the Reserves and was also coach of the Thirds team, assisted by Wally Ward who would go on to coach the Thirds for the following four seasons.

Eric Beitzel and 'Big Bob' Jones were both selected to represent the VFA at the ANFC carnival held in Sydney and Canberra in June/July, while Gerry Callahan was selected as coach of the team.

Since the resumption of the VFA after the Second World War, Williamstown had played a total of 351 games for 259 wins, 4 draws and 88 losses. 160 of those games were played at home which resulted in 135 victories, one draw and 24 defeats, a number of which were by one or two points. Included in the figures for home games were three games played under lights at South Melbourne, two of which were won and one lost.

At the conclusion of the season, a party of 28 players, officials and supporters made their way to Wagga for the annual end-of-season trip.

Former vice-president from 1952-58, VFA delegate of 1959-60, timekeeper 1960 and life member, Cyril Downes, passed away suddenly during the year. He had received his life membership, along with the now-retired Gerry Callahan, at the annual meeting in February. Former player of 1903-04, Frank Wilcher, who later played 53 games with Collingwood from 1906-09, also passed away on June 8, aged 76. Wilcher was Mayor of Williamstown in 1927-28.

Long-serving member of the Ladies Committee and treasurer since 1954, Edie Nicholson, vice-president since 1953 and former player (7 games 1933), Tom Orange, along with general committeeman from 1956 and selection committee member and chairman since 1957, Jack MacDonald, and committeeman since 1957 and selection committee member since 1958, Bill Raffle, all received life memberships at the annual meeting in respect of the 1960 season held at the Town Hall on February 16, 1961. MacDonald continued on as a general committeeman until 1964 and then became a vice-president until the end of 1973. Apart from the best and fairest trophies mentioned above, awards were also presented at the meeting to Graham Clough and Alan McAsey (equal best first-year players), Eric Beitzel (most serviceable), Jack Evans (best utility) and Maurie Collins (special services).

Adult membership stood at just 416 in 1960, a drop of some significance from the 3130 in 1946, which followed the resumption after the war, a premiership season and Ron Todd's phenomenal 188 goals. There were also 24 junior members in this season. 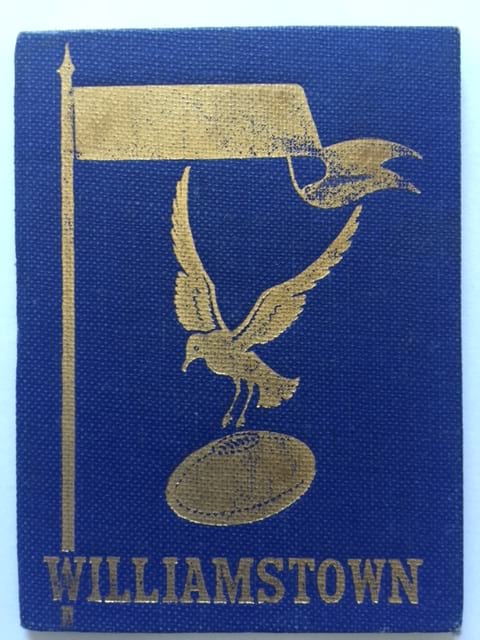 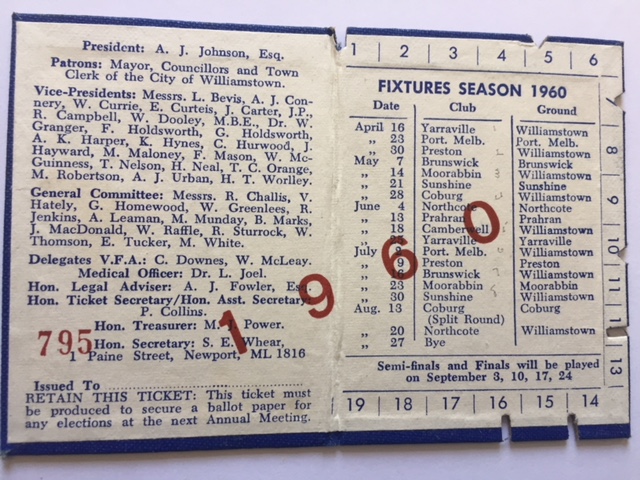 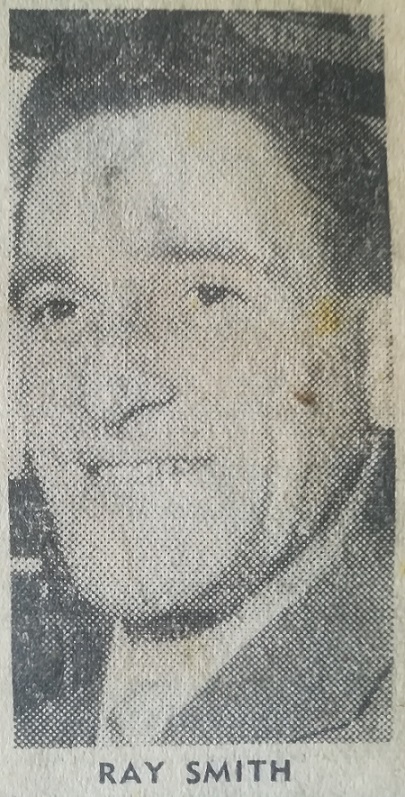 Ray Smith was made captain in 1960, taking over from the legendary Gerry Callahan who became non-playing coach. He broke the Club games record of 173 held by Colin Wilcox during the year, in a season that saw him claim back-to-back best and fairest honours and finish fourth in the Liston Trophy. 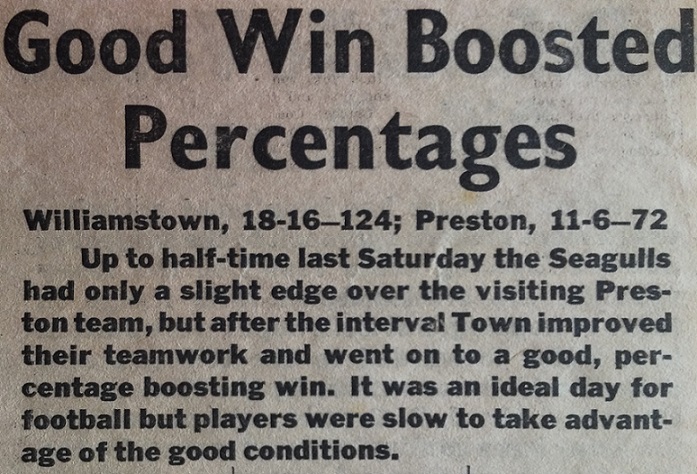 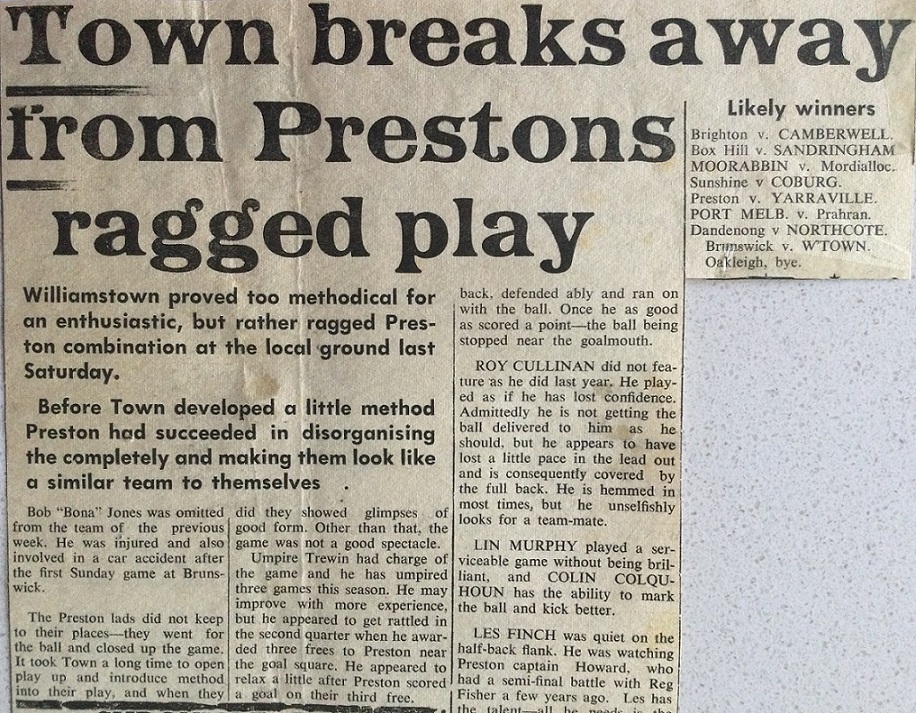 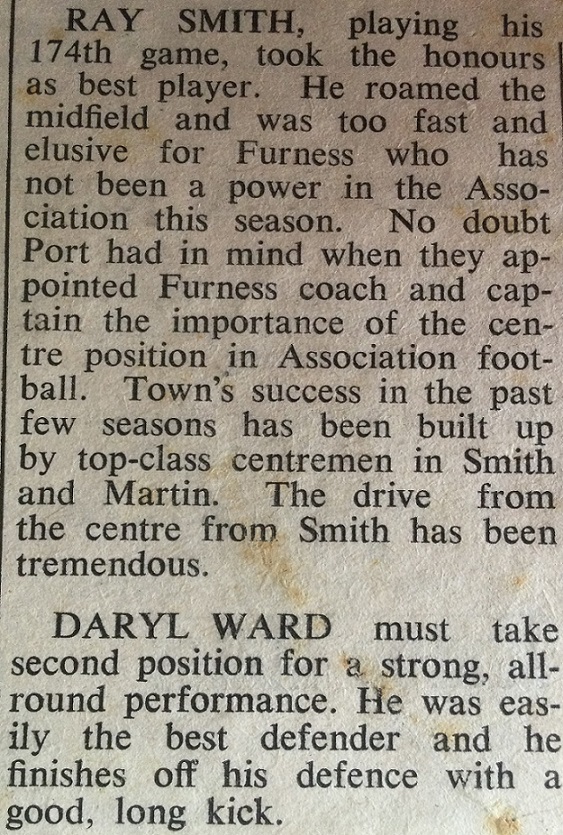 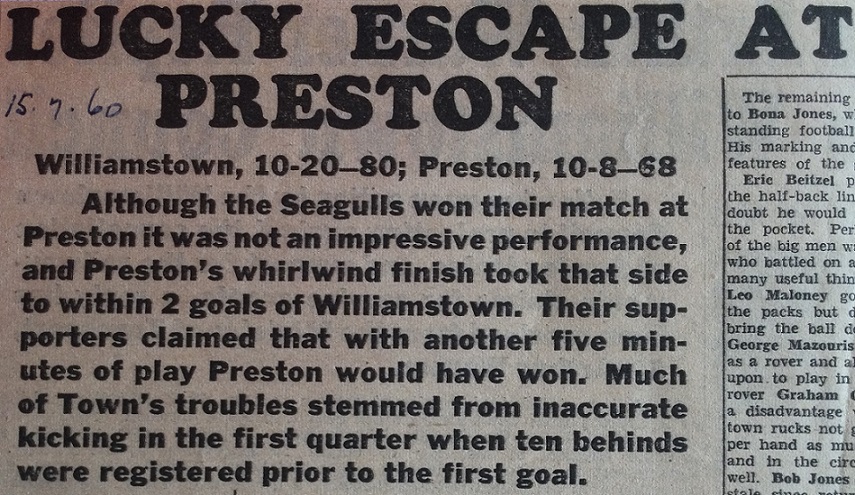 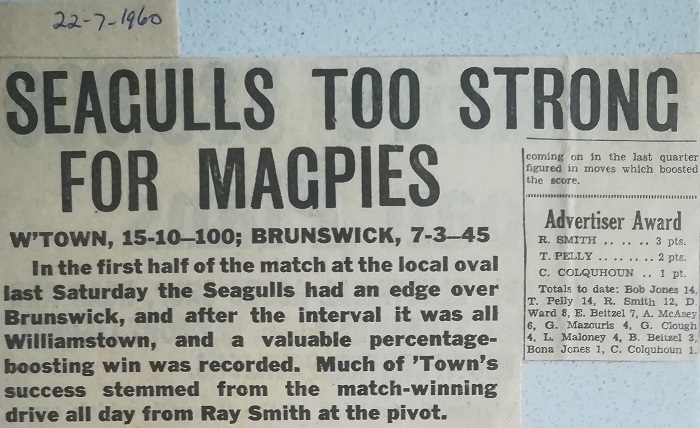 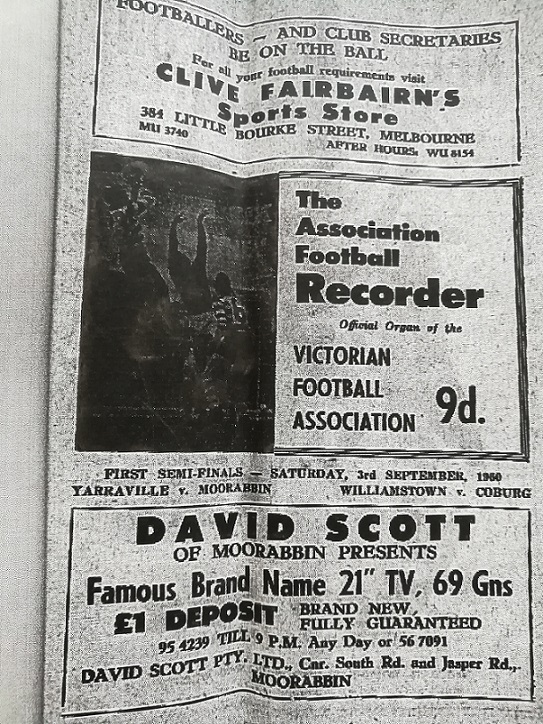 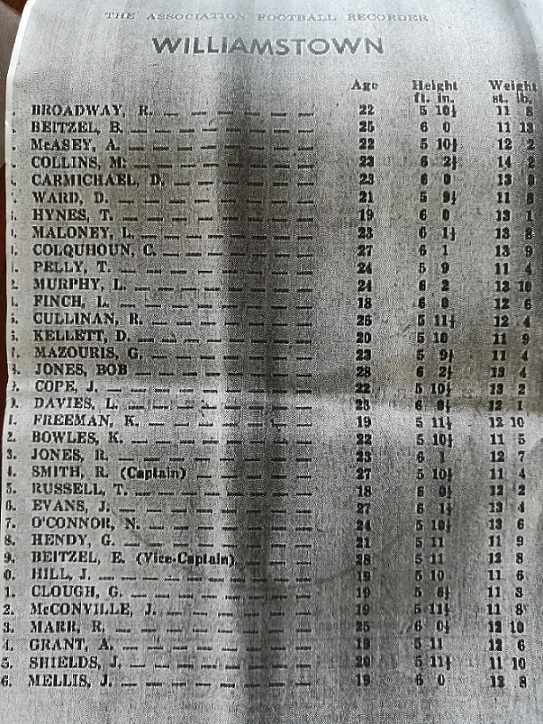 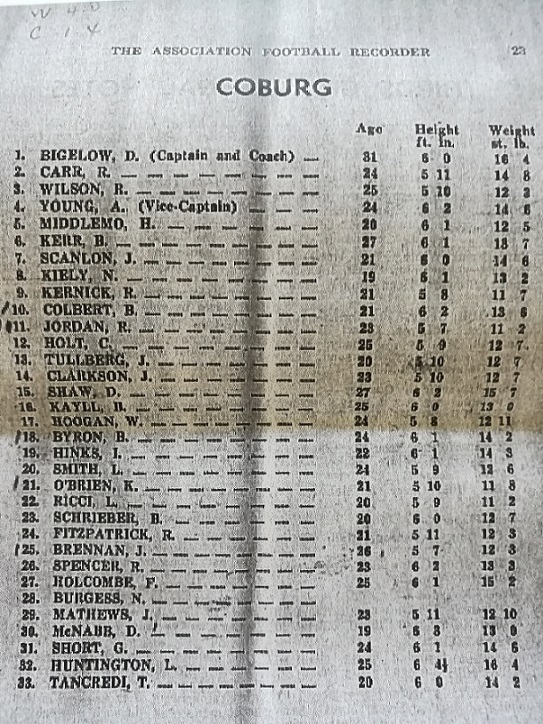 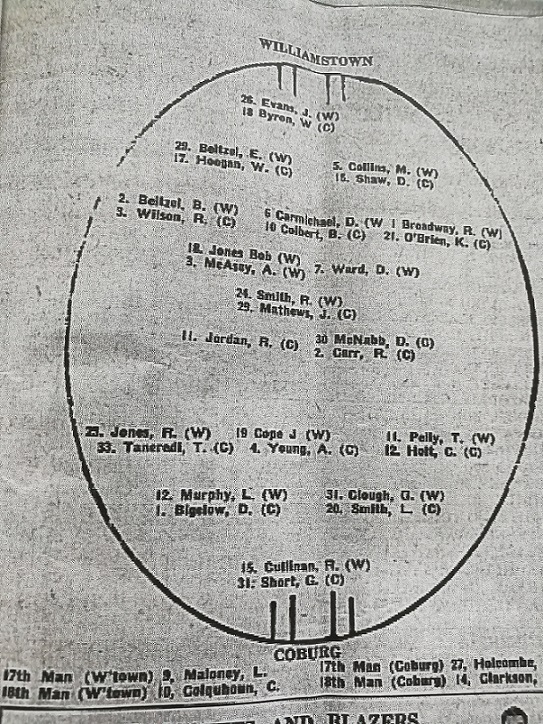 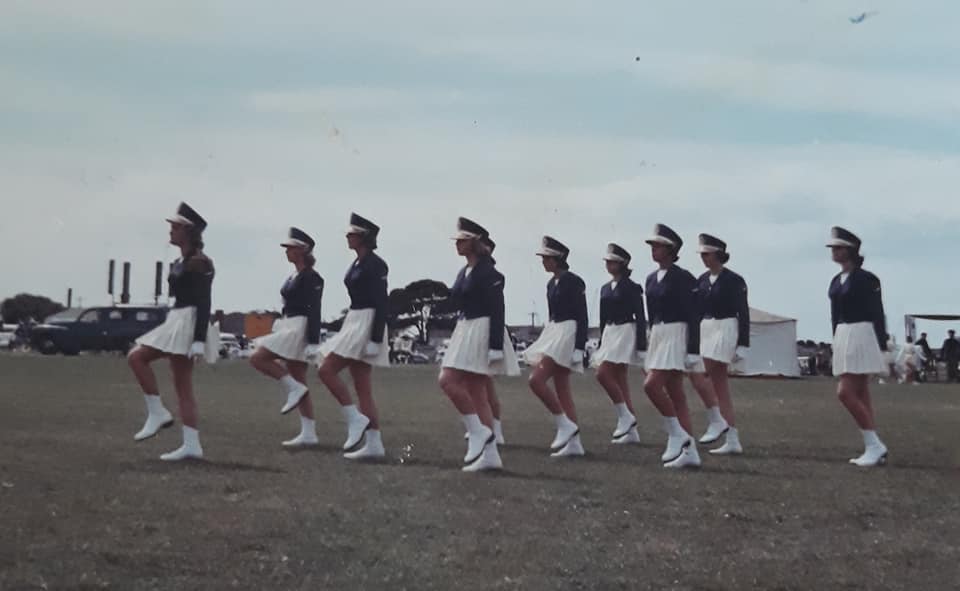 Williamstown and West Newport Marching Girls gave exhibitions during the half-time interval at games in the 1960's. 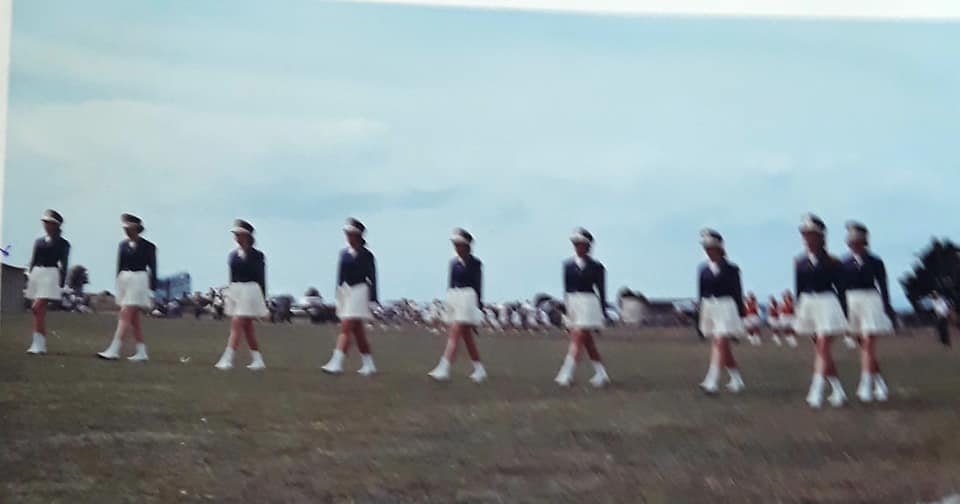 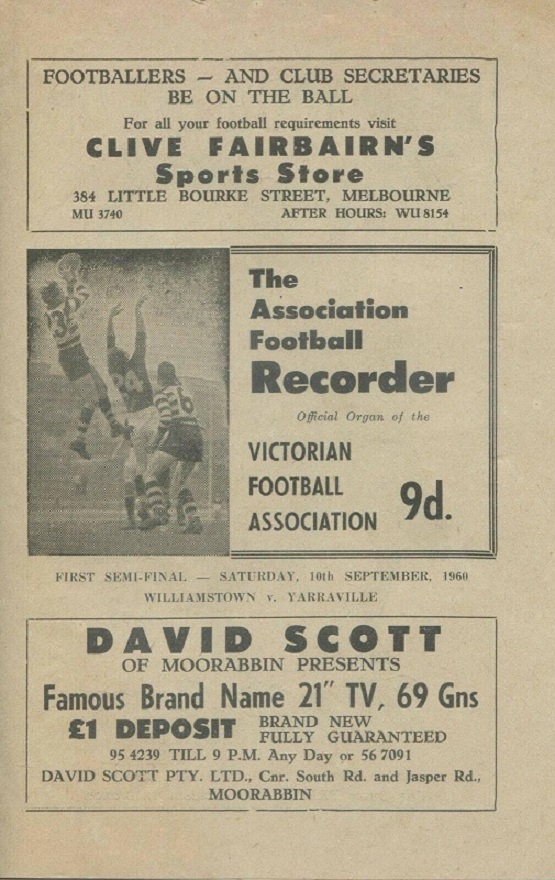 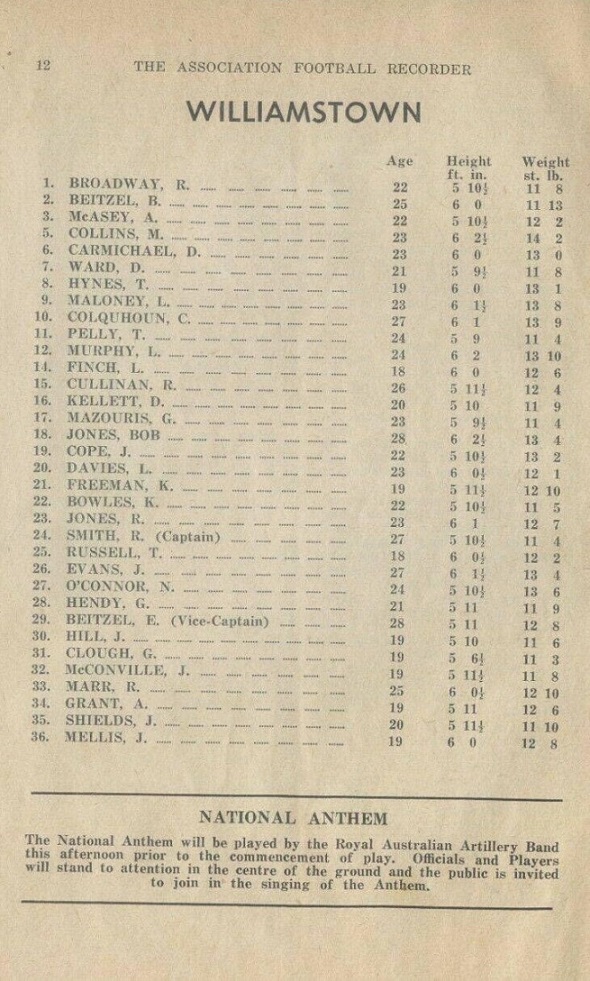 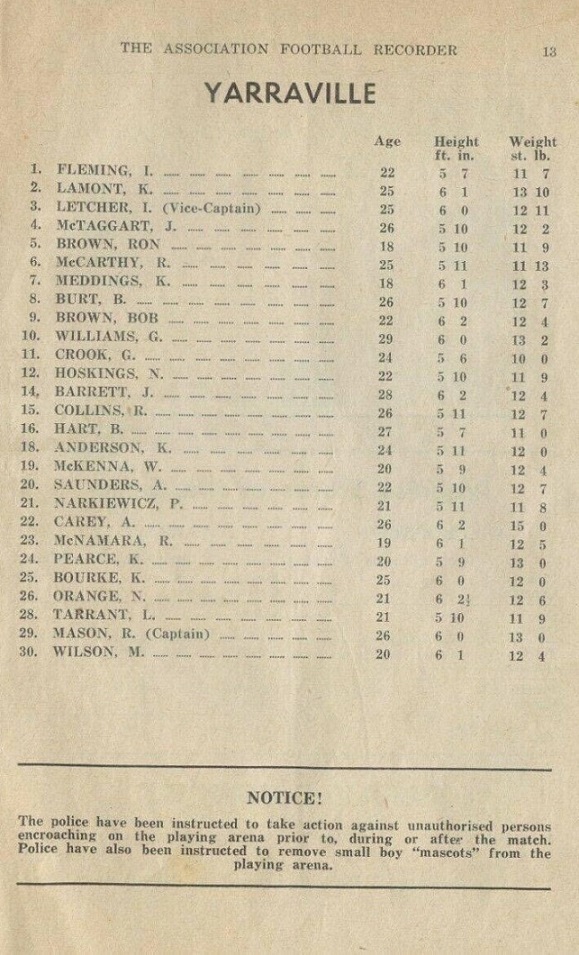 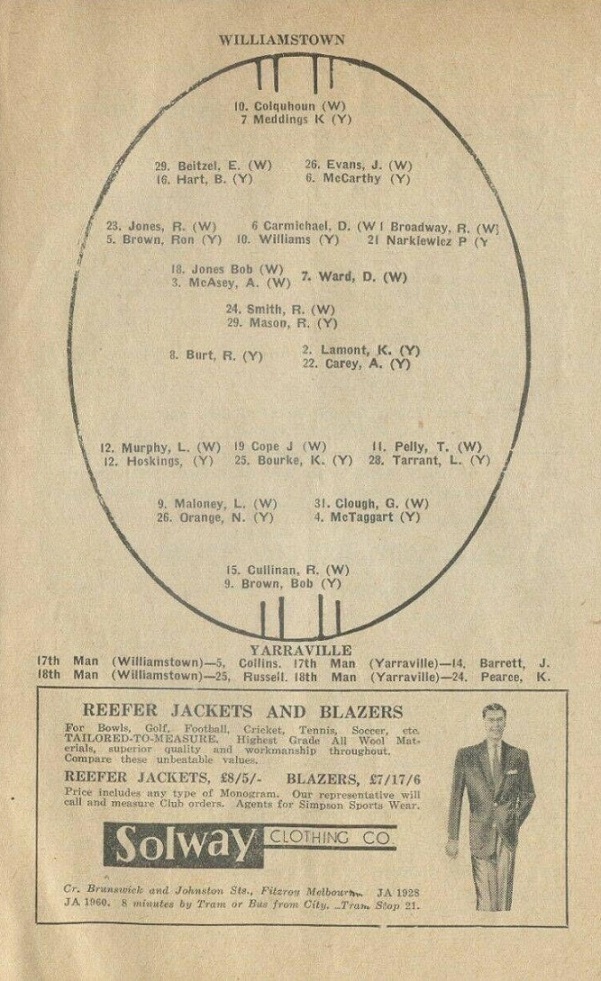 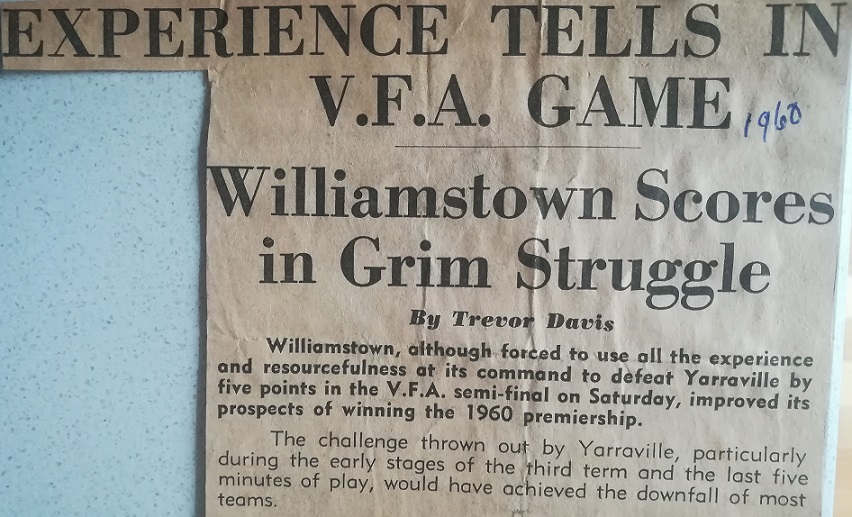 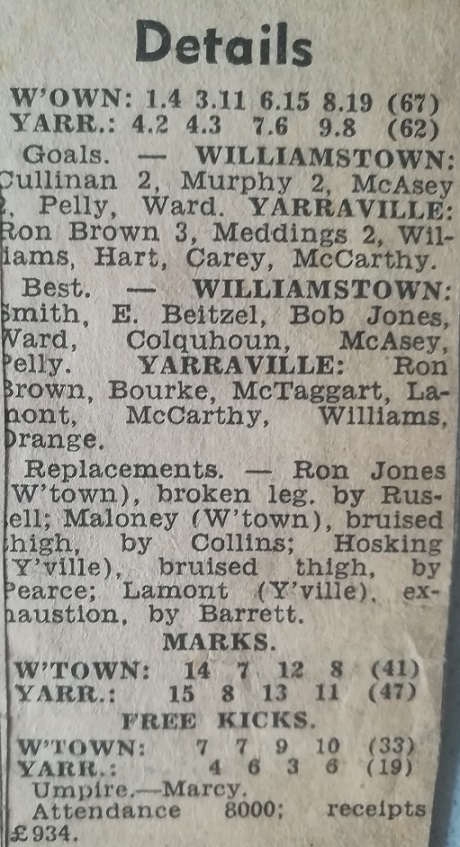 Scores from the first semi-final at the Junction Oval, St Kilda, v. Yarraville. 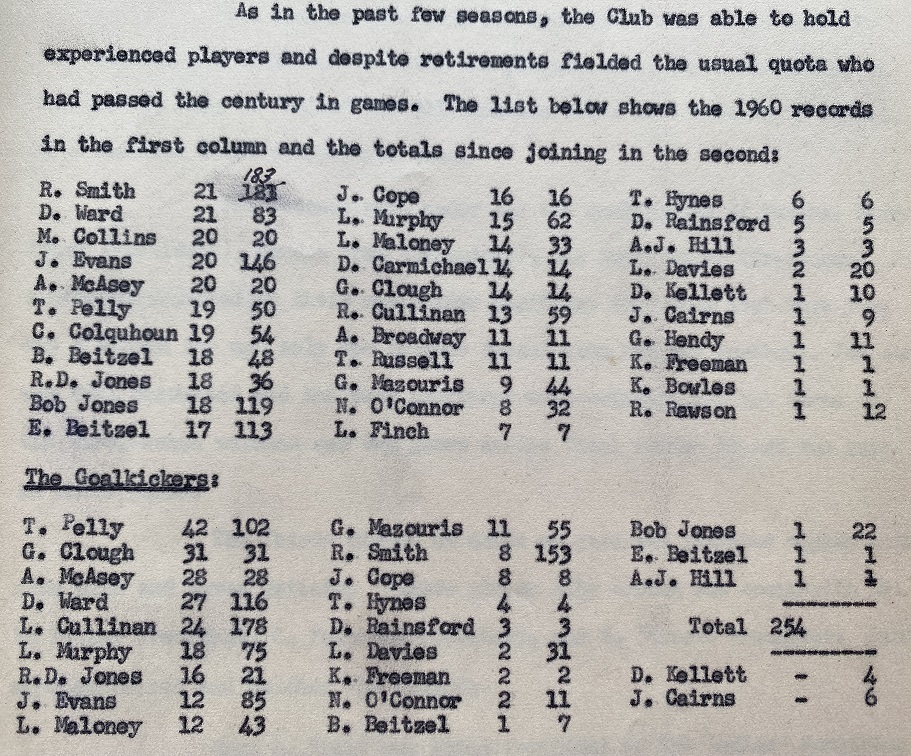 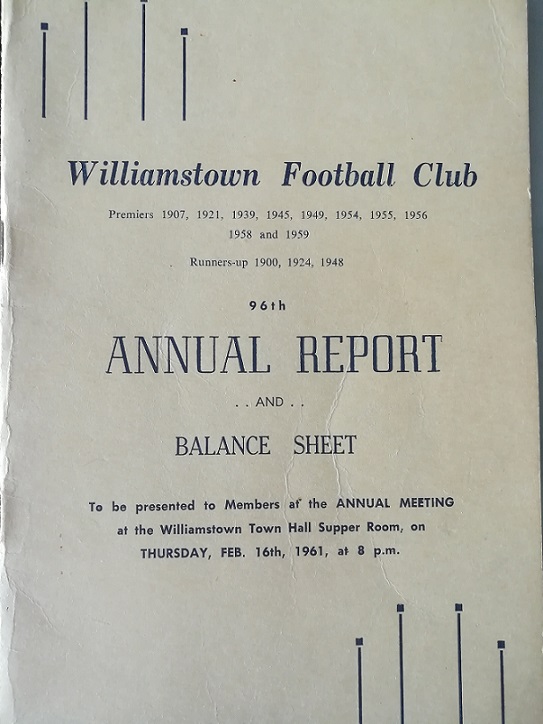 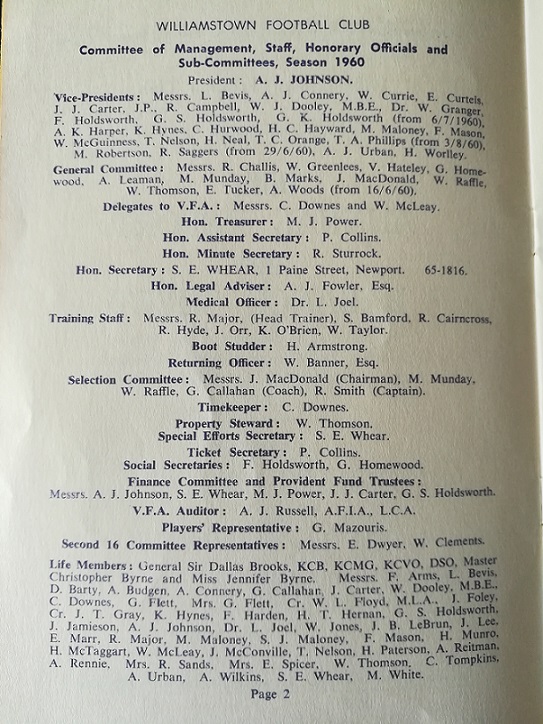 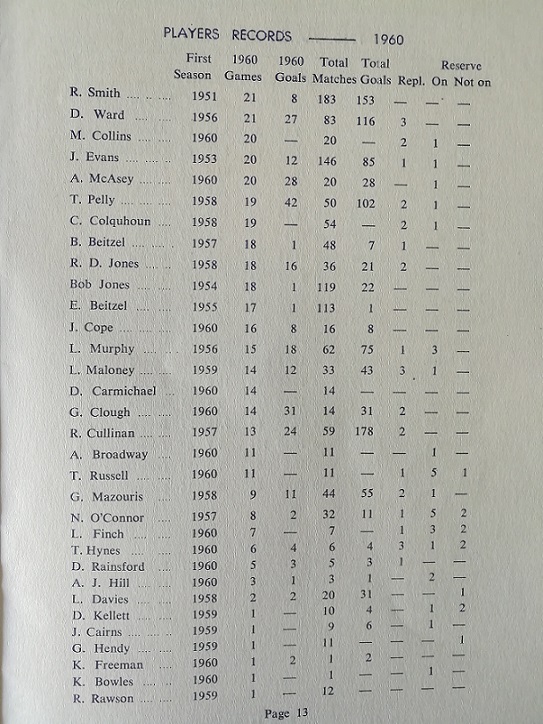 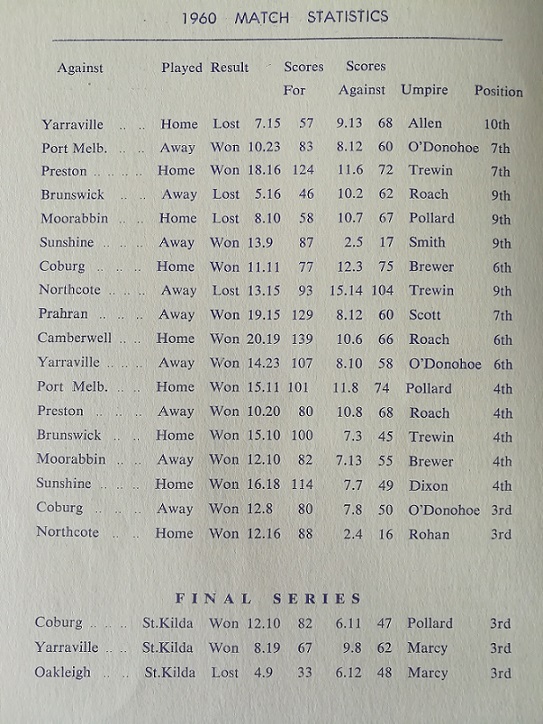 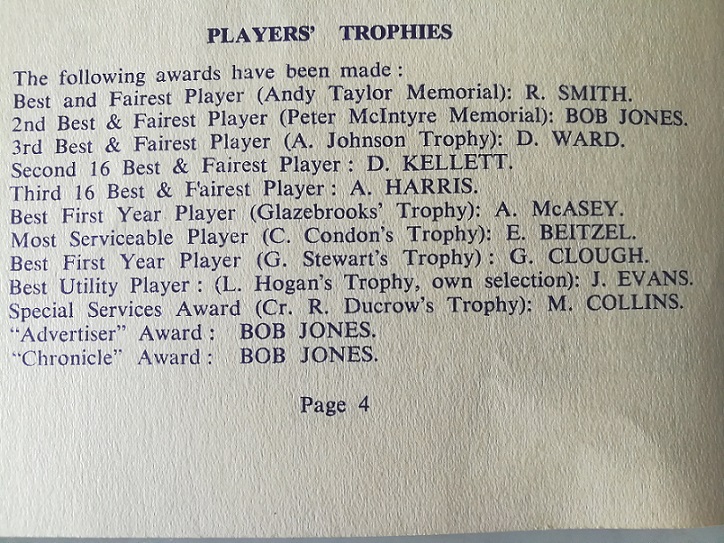