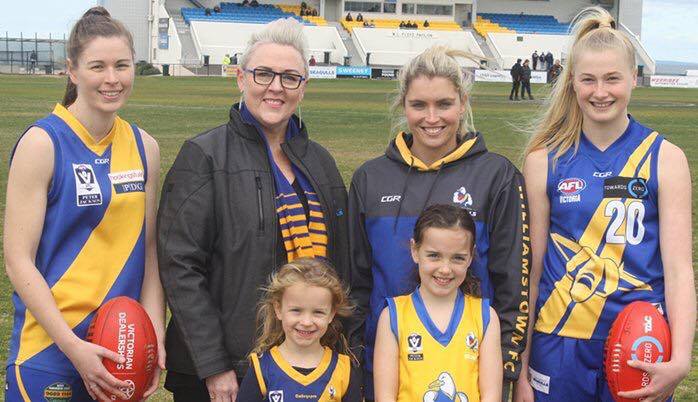 Williamstown Football Club is excited to announce that it will feature a women's team in the Swisse VFL Women's competition, after it was announced today that the Seagulls had been awarded a license to play in the league from the 2018 season.

The Club's key objectives in gaining a VFLW license were to:

With 43 Youth Girls teams in the Western Regional Football League and Essendon District Football League with continuing growth expected, the Club believed there was a need for another state-level team to be established in the western suburbs of Melbourne.

Williamstown FC CEO Jason Reddick was thrilled with the announcement.

"Our Board has been focused on entering a VFL Women's team for over 18 months now and we are grateful to AFL Victoria for their guidance and confidence in us to deliver a VFL Women's team to facilitate the growth in Melbourne's west," said Reddick.

"We are committed to providing a professional environment to develop all those female footballers eager to take their career to the next level."

The Williamstown Football Club sponsored the Western Jets TAC Cup Youth Girls team in 2017, and will continue to work with the Western Jets and other local and regional clubs to provide VFLW opportunities for players as they make their way through the talent pathway.

The Club has also hosted international women's teams in China (2014) and Canada (2017) for the AFL International Cup, established a girls and boys Accelerated Football Program for the Williamstown High School for students in Years 7-9, and has hosted curtain raisers of VU Western Spurs games at Burbank Oval.

The Williamstown Football Club board is 100% committed to the VFL Women's competition and have appointed Director, Michelle Redfern, to oversee the women's program from board level.

Redfern was previously a Board Member of the Gippsland Football League where she was a key figure in establishing women's football club Gippsland Galaxy, now known as the Gippsland Maroons.

She is also the Founder of Advancing Women in Business & Sport and is a key figure in the AFL industry in promoting gender equality.

"I am thrilled to be a part of the successful Williamstown FC bid for a VFLW license and to be providing an oversight at a director level for our female team," said Redfern.

"Inclusion is one of WFC's core values which is demonstrated by our commitment to advance women, both on and off the field."

Both of the Club's VFL and VFLW programs will operate under an integrated, 'side by side' arrangement to ensure that the Williamstown Football Club has a 'One Club Culture'.

All coaching and staffing positions will be advertised on the Club website, williamstownfc.com.au.

For anyone considering sponsorship opportunities to be a part of this exciting new era for the Williamstown Football Club, please email This email address is being protected from spambots. You need JavaScript enabled to view it..

The Club will hold a talent identification session on November 24 at Victoria University where prospective players will be able to come and try out to be a part of the inaugural women's team.

Please enter your details here if you would like to register for the session.