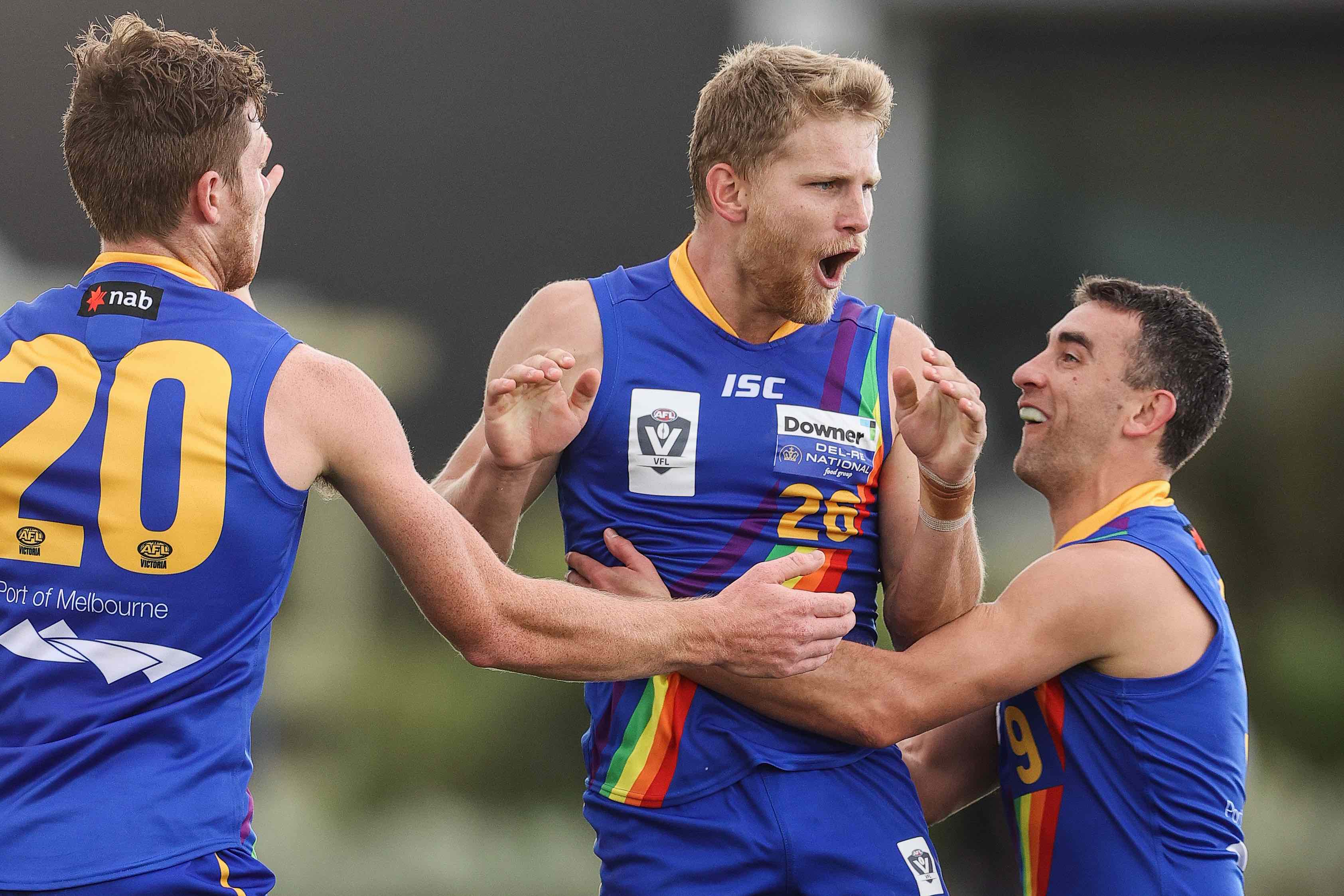 (Nick Ebinger celebrates one of his two goals on Saturday. Photo by Martin Keep).

Williamstown has continued its perfect start to the 2021 VFL season after an impressive 84-point victory in the Club’s Pride Round match at Downer Oval.

In what is a proud and celebrative day for the football club, the Seagulls looked to be the dominant of the two sides from quarter time, kicking 15 goals to three, to remain unbeaten after the first four rounds.

Darby Henderson had season highs for disposals (26) and marks (10) to help the Seagulls on to victory.

With both teams having not lost a match heading into this game, it lived up to its highly anticipated nature in the first term as both sides played a strong, contested brand of footy.

After the Dolphins kicked the first major of the game early, a nicely crafted goal from Pickess as well as a set-shot conversion from Meadows gave Williamstown a five-point lead heading into the first quarter break.

The Gulls then picked up the pace early in the second term with dynamic forward Ebinger, in his first game in the blue and gold this season, taking a spectacular contested grab and converting his set shot from 20 metres out.

Jordan Gallucci was on par with Ebinger’s incredible marking effort just three minutes later before slotting home his first, Henderson also nailed his set shot from a difficult angle on the fence line to give the home side a 24-point lead 15 minutes into the second quarter.

After Frankston fired one back not long afterwards, skipper Adam Marcon cleverly roved a pack close to goal and soccered through a brilliant major to keep the lead at four straight goals heading into the main break.

As they did in the first term, the visitors kicked the opening major of the third quarter but for the remainder of the period, Williamstown dominated.

Ebinger, Pickess and Meadows all kicked their second respective goals in the term while Gown rewarded his brilliant pack mark with a goal halfway through the quarter while tall forward Joel Ottavi nailed two goals of his own to open his account for the afternoon.

With a 56-point lead heading into the final quarter, there was no turning back for the Seagulls who piled on 5.5 in the final stanza to comfortably defeat their standalone counterparts and rise to second on the ladder.

Williamstown travels to Sandringham next Saturday to take on the winless Zebras in Round 5.

If you haven't yet, click here to join us on our 2021 journey with a membership!