The Bendigo Bombers changed its name to Bendigo Gold in preparedness for the end of its alignment with Essendon at the conclusion of the season, and the Northern Bullants became the Northern Blues and adopted a more Carlton-style jumper in the 10th year of its affiliation with the AFL club.

Meanwhile, home games returned to Williamstown with the completion of the ground refurbishments and the opening of the renovated WL Floyd Pavilion.

New players to join the Club included TAC Cup players Anthony Anastasio and Jack Charleston, while Ben Jolley was appointed captain after the departure of Brett Johnson at the end of 2011. Other players who moved on included Ben Davies, David Stretton, Dane Rampe and Matthew Grossman. Dual best & fairest winner James Wall and Michael Stockdale, both former VFL Team of the Year members, joined the Club from the Casey Scorpions, while Clinton Proctor returned after four years at Frankston and former West Coast Eagle, Jamie McNamara, moved over from East Fremantle where he was vice-captain and runner-up in their best and fairest in both 2010 and 2011.

Victories in the elimination final against Bendigo, 11.17.83 to 10.11.71, and Casey in the first semi-final, 11.9.75 to 5.8.38 (James Wall best), signalled eight consecutive wins for ‘Town from rounds 15-22 and the two finals. There were two byes during this run of victories. The season came to an end with defeat by Port Melbourne at North Port in the preliminary final, 12.15.87 to 7.11.53. Jack Frost, Stevie McCallum, Ben Jolley and Bulldog Michael Talia were best for the Seagulls.

The Reserves team, which changed names to the Development League in this season, finished undefeated on top of the ladder with eighteen wins, but lost its knockout semi-final to Coburg narrowly, 11.5.71 to 10.7.67, to bow out of the finals. Matthew Cravino was best player and also runner-up in the A. Todd Medal for the VFL Development League best and fairest, after having won it in 2010 and 2011. It was also his last year at Williamstown after seven seasons. 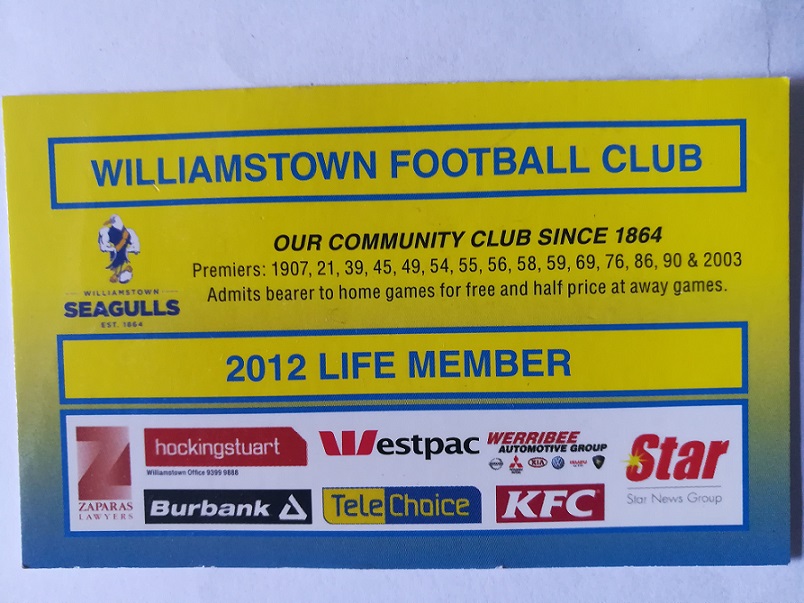 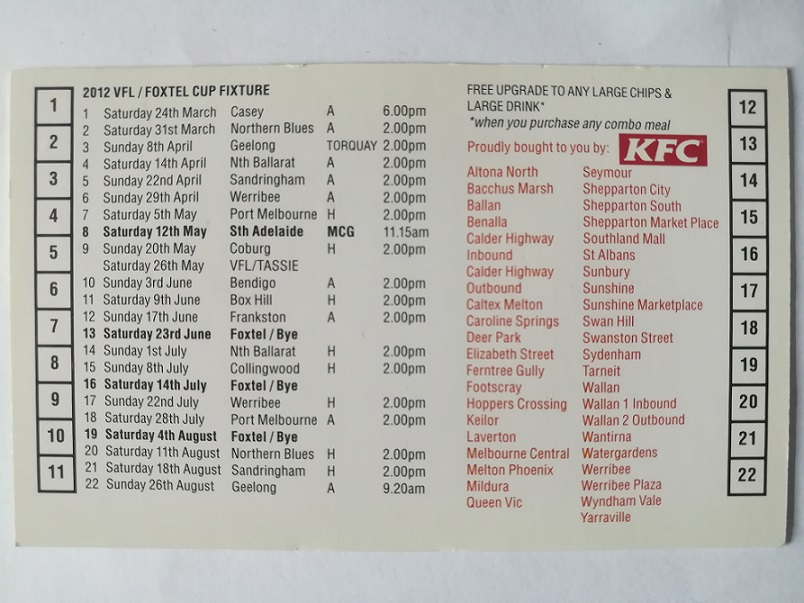 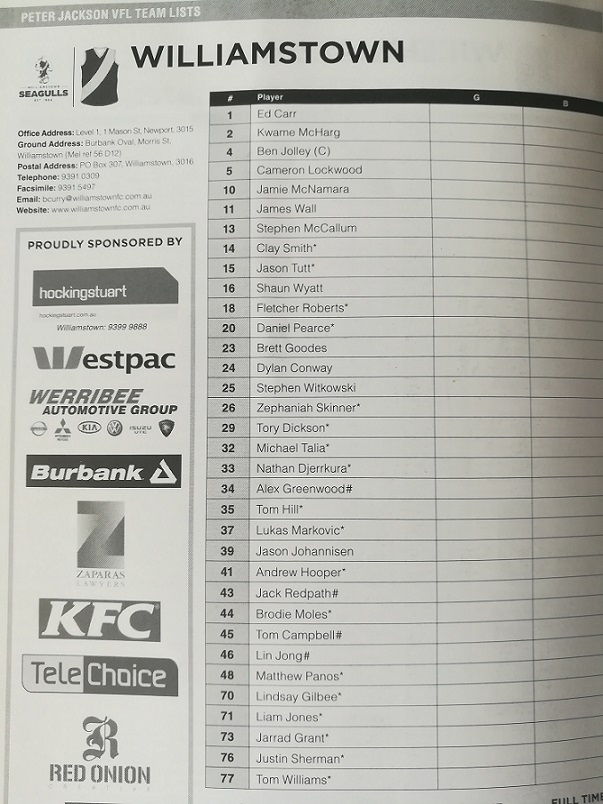 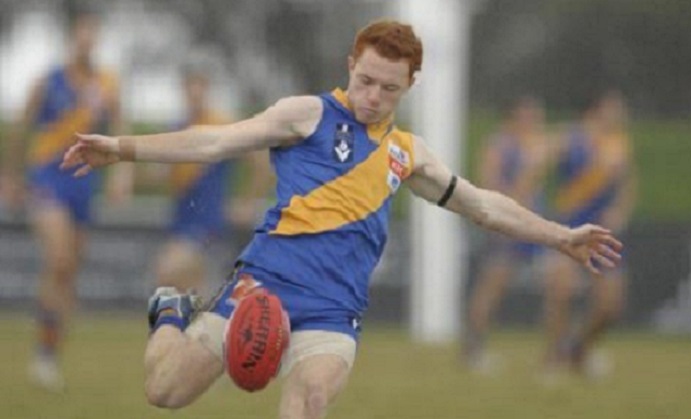 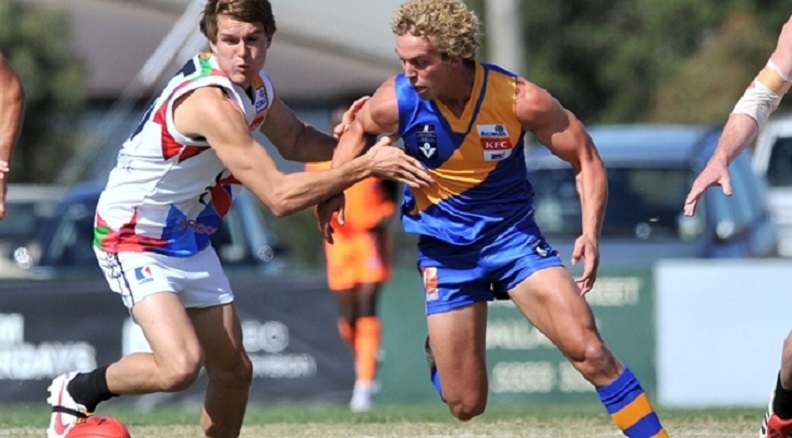 Western Bulldogs-listed player, Mitch Wallis, in action in the 52-point victory at North Ballarat in round 4 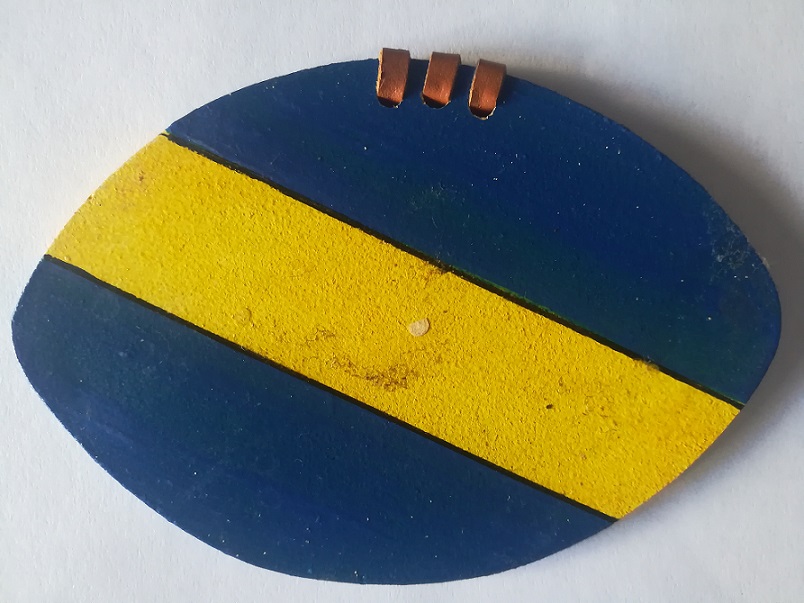 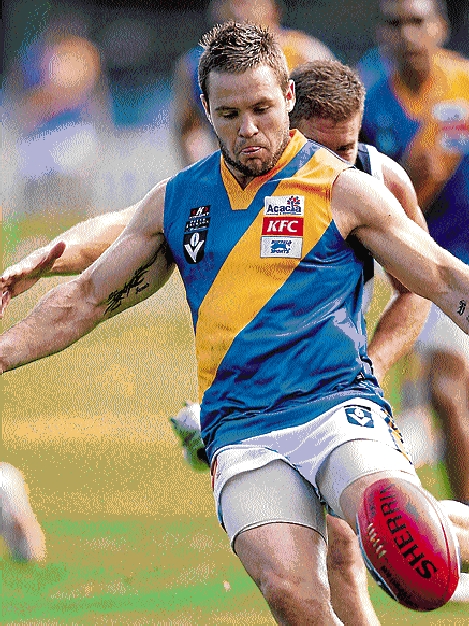 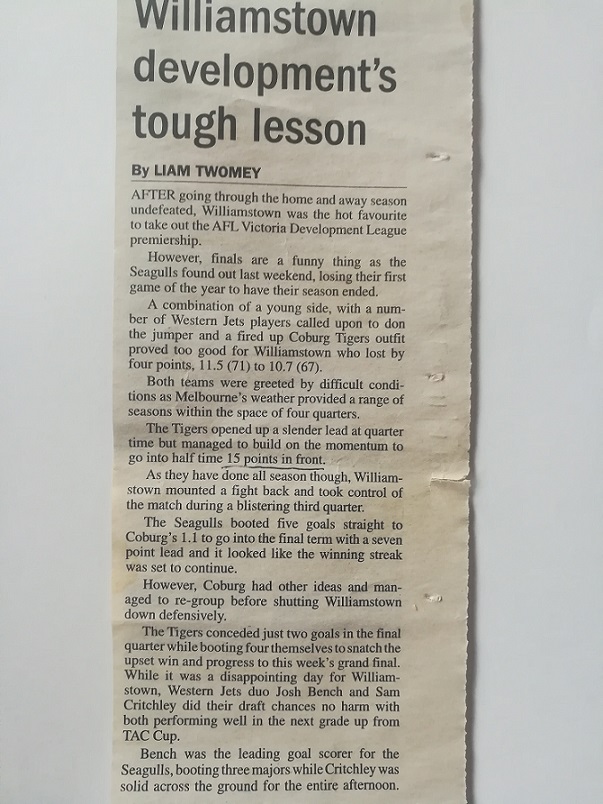 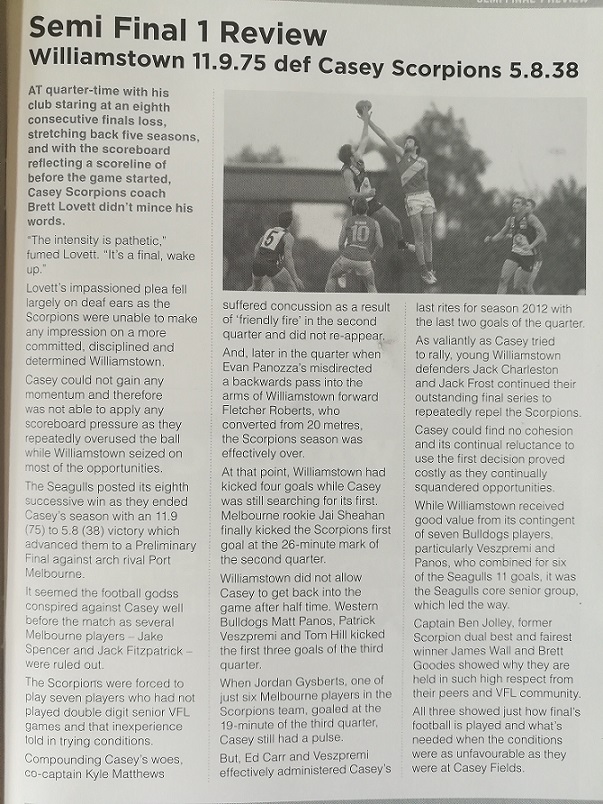 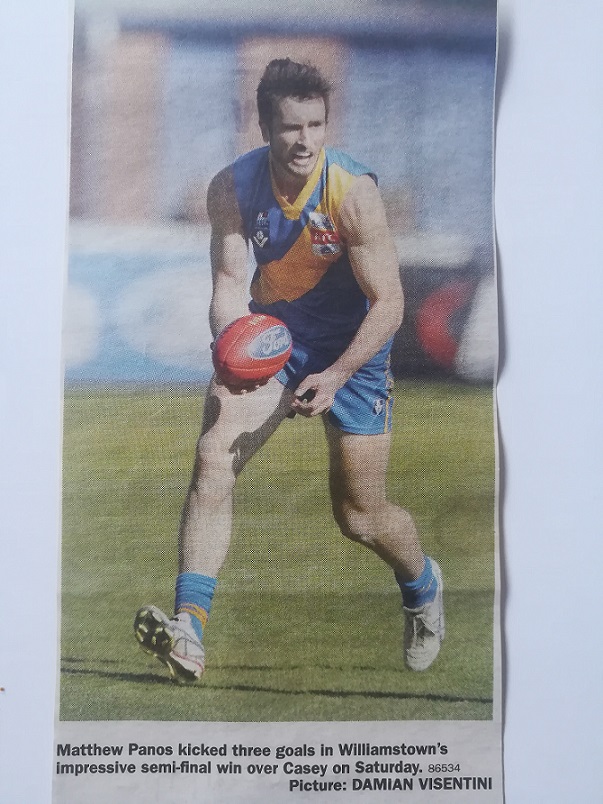 Bulldog-listed forward, Matthew Panos, was the leading goalkicker in 2012 with a total of 23 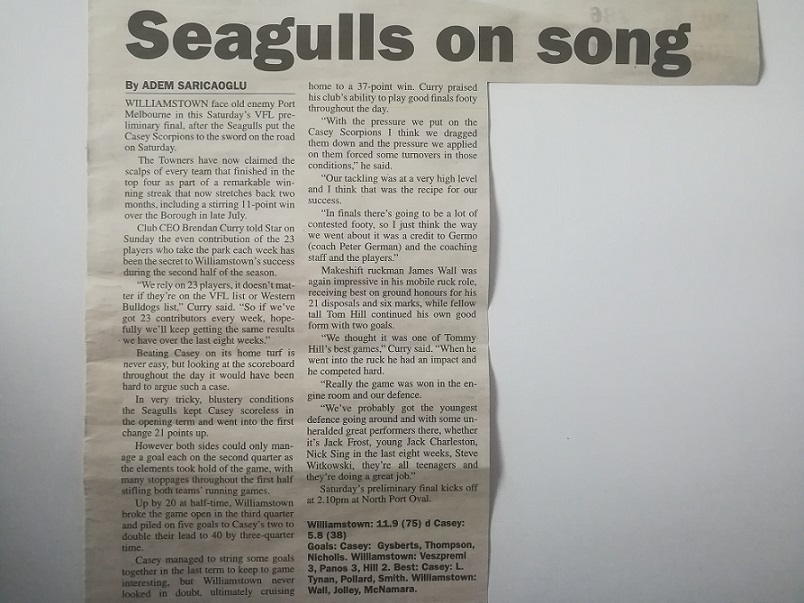 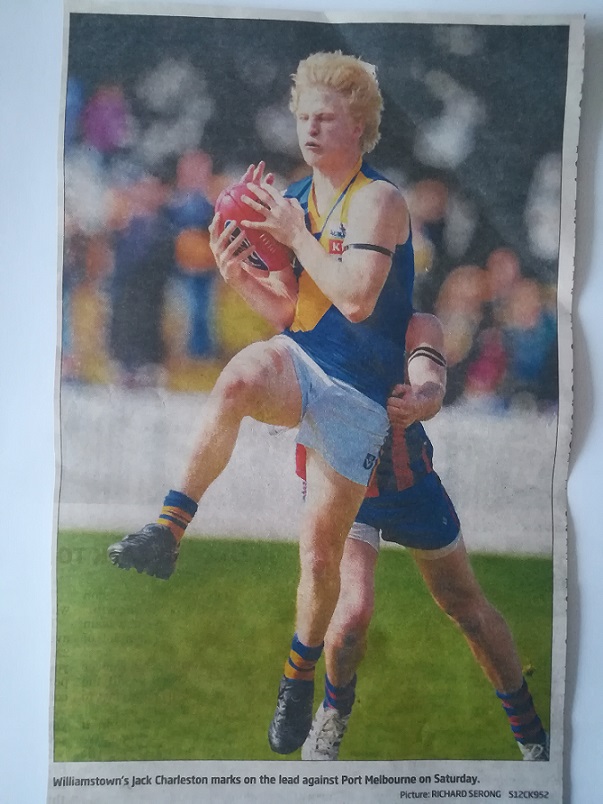 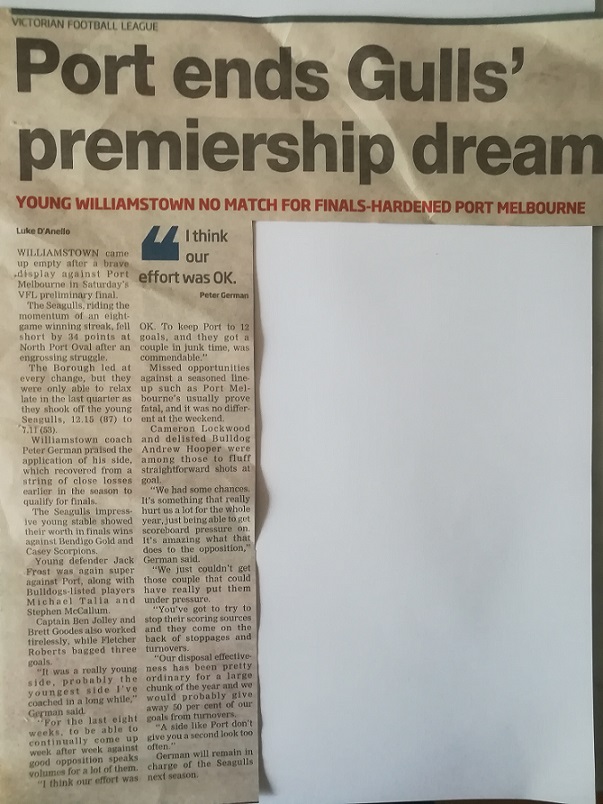 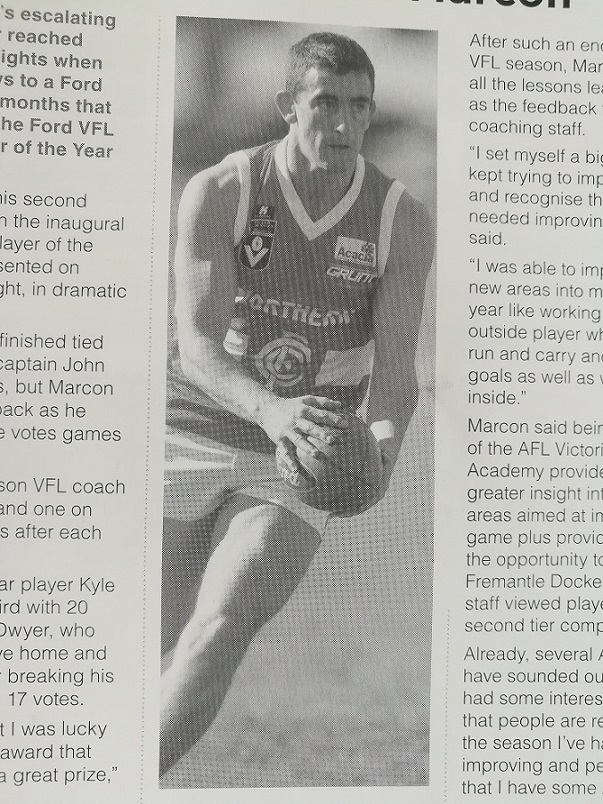 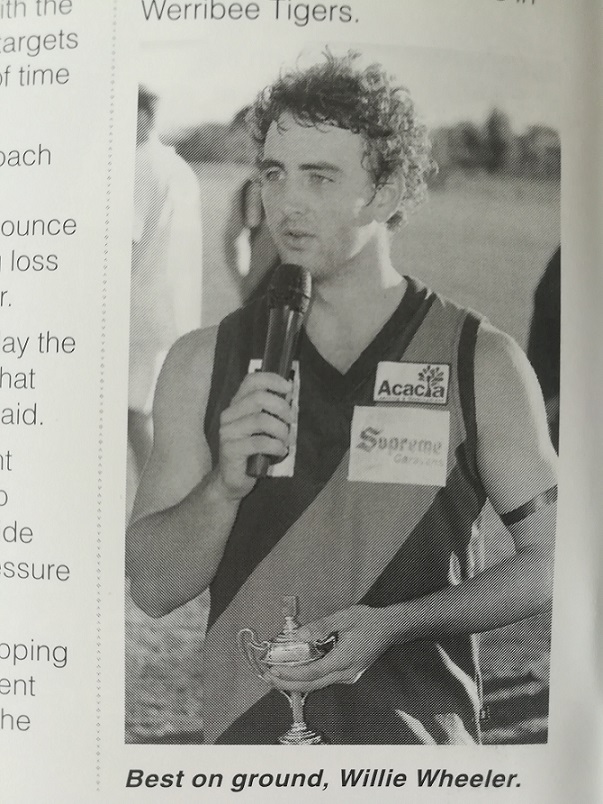 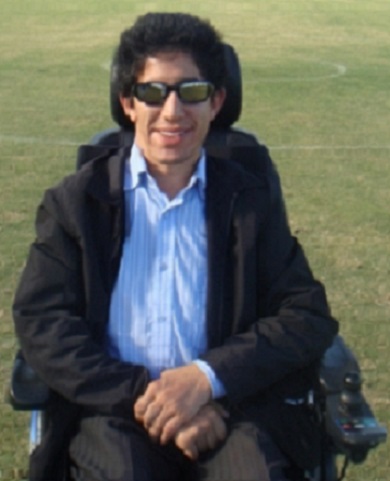