The season commenced with a comfortable win over Werribee, 17.15.117 to 9.10.64, while Brad Gotch’s 100th game as coach came in round 2 when the game against Port was drawn at 13.15.93 apiece, the seventh occasion that this has occurred. This made Gotch the third longest-serving coach behind the legendary Gerry Callahan and dual-premiership winner Gordon Ogden. Port had led by 27 points at the 11-minute mark of the last quarter before the Seagulls rallied to boot the last four goals of the game. At the final siren the scoreboard showed the Borough ahead by 4 points even though both coaches believed Port had won by a point. After the goal umpires conferred the result was determined to be a draw. Newcomer, Dean Limbach, booted six goals.

Remarkably, the round 3 clash with Casey ended in yet another draw at 15.15.105 each. Then, after ten rounds, Williamstown had seven wins, one loss and the two draws and were sitting on top of the ladder. Four losses in a row ensued over rounds 12-15 against Geelong, Casey, Coburg and Sandringham.

The team bounced back in the round 19 clash at Port Melbourne, with 35yo Collingwood champion Nathan Buckley making his second appearance for the Seagulls (the first was against Box Hill in 2005), with a huge win, 26.13.169 to Port’s 7.12.54. Buckley picked up 29 possessions and kicked a goal in each quarter while Magpie teammate, Paul Licuria, also stood out with 34 disposals.

To see highlights of Nathan Buckley playing for Williamstown in the game at Port Melbourne click on the following link:

At the completion of the home-and-away rounds, the team finished in fourth place with 10 wins, six losses and two draws. The Reserves also ended up in fourth spot on the ladder with 12 wins, 5 defeats and one draw.

In the qualifying final played at the Trevor Barker Beach Oval, Williamstown triumphed 17.11.113 to Sandringham’s 16.15.111 in a thriller. However, in the preliminary at North Port Oval, Coburg were too strong and won 20.17.137 to 11.10.76 to end the season for ‘Town, after the Seagulls had a three-goal lead at half time that should have been at least double.

Also, the alignment agreement with Collingwood came to an end at the completion of the season after seven years, when the Magpies elected to run their own stand-alone team in the VFL from the following season.

Andrew Williams was once again the Club’s leading goalkicker for the year, while Ben Davies took out the Gerry Callahan Medal from Sam Iles. Matthew Miller won the Bill Sheahan Memorial Trophy for the Reserves best and fairest. Matty Cravino was awarded the Ron James Memorial Trophy for most valuable player, while Dr Jason Chan was voted best clubman and the Bill 'Darkie' Raffle Memorial Trophy winner.

Scoreboard attendant for the past 27 seasons, Noel Portingale, stood down at the end of the year for health reasons. 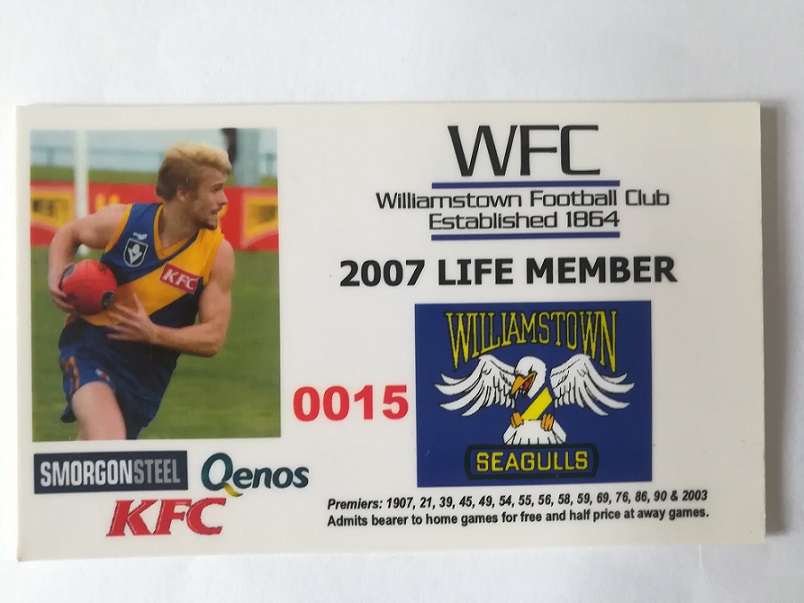 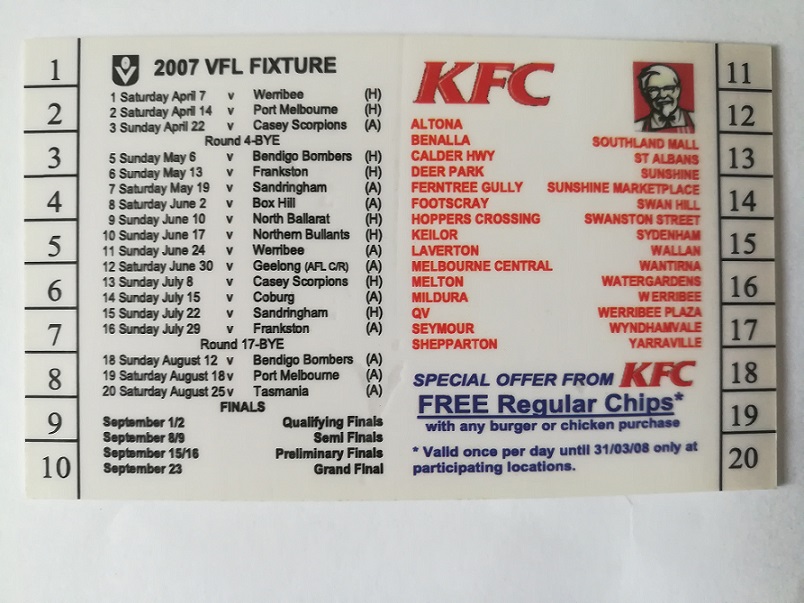 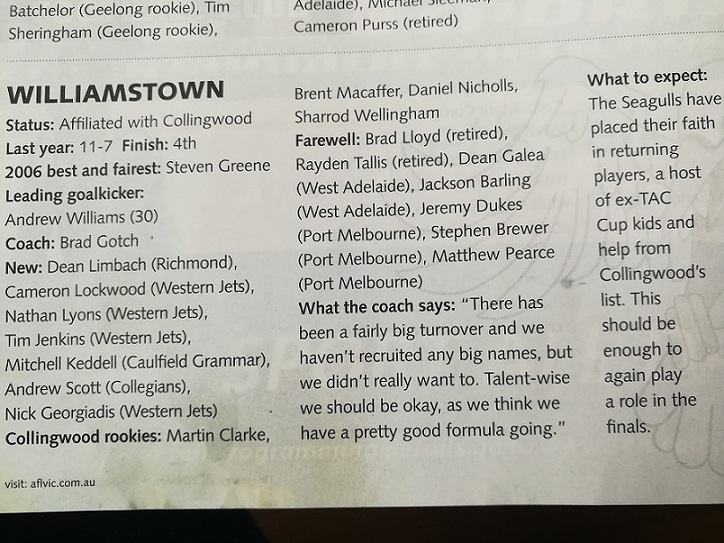 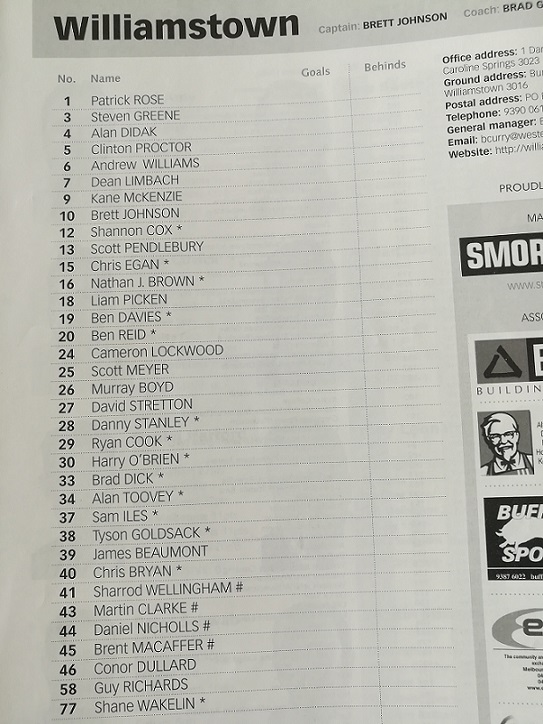 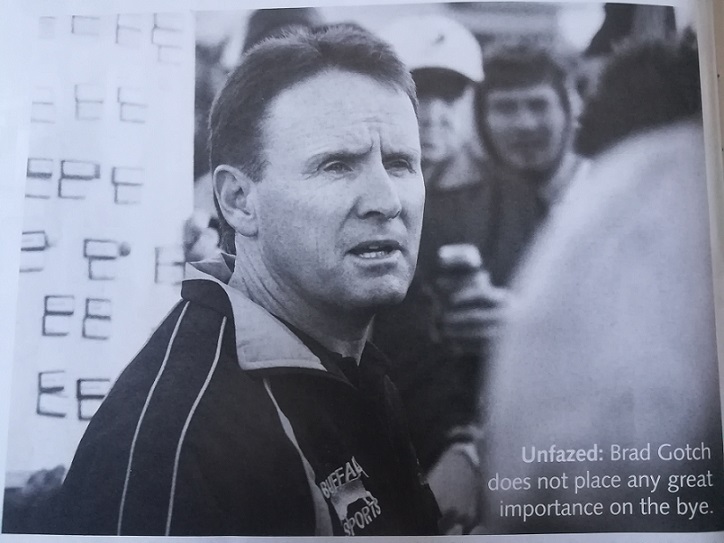 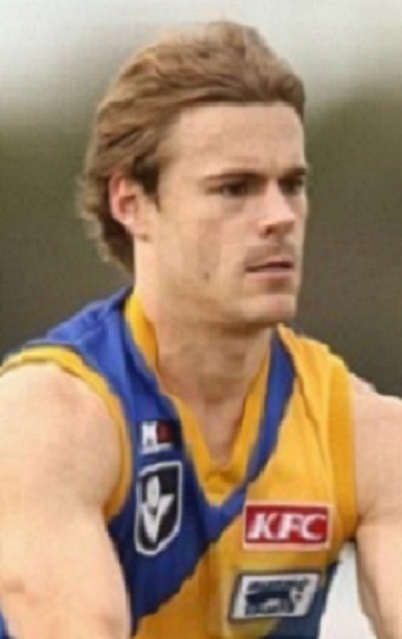 Brett Johnson took over the captaincy from Brad Lloyd in 2007. 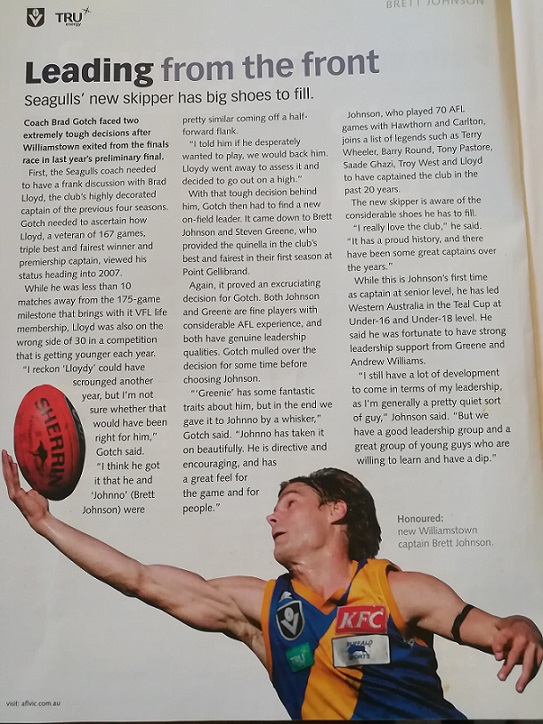 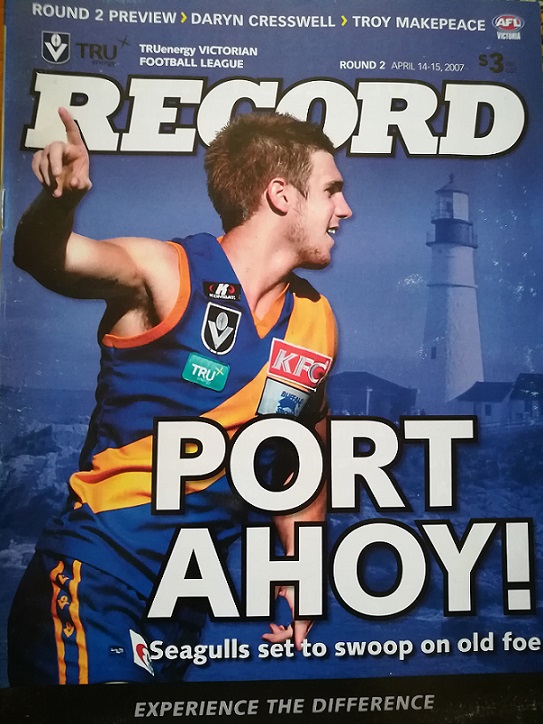 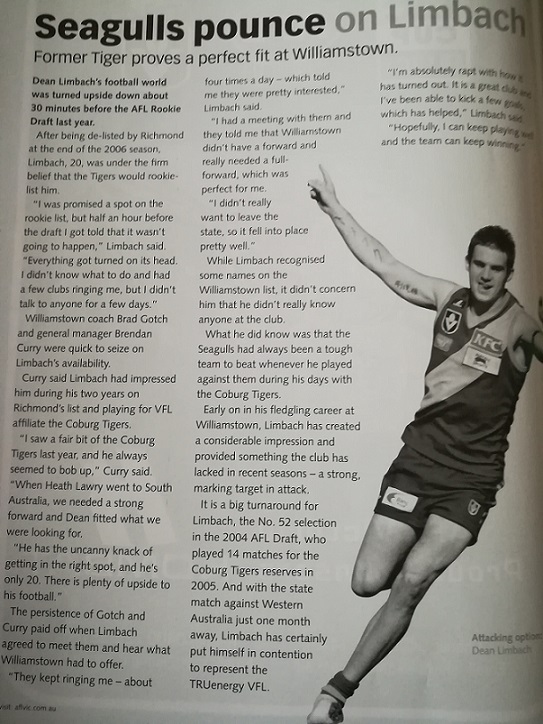 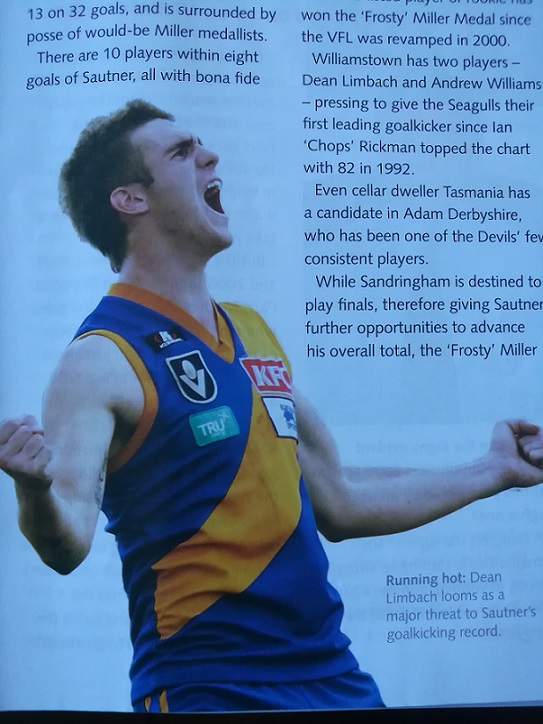 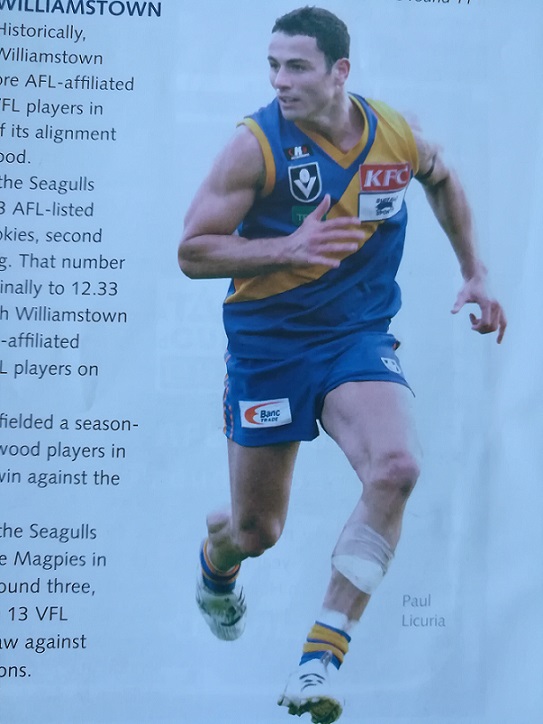 final against Sandringham at Trevor Barker Beach Oval on September 1 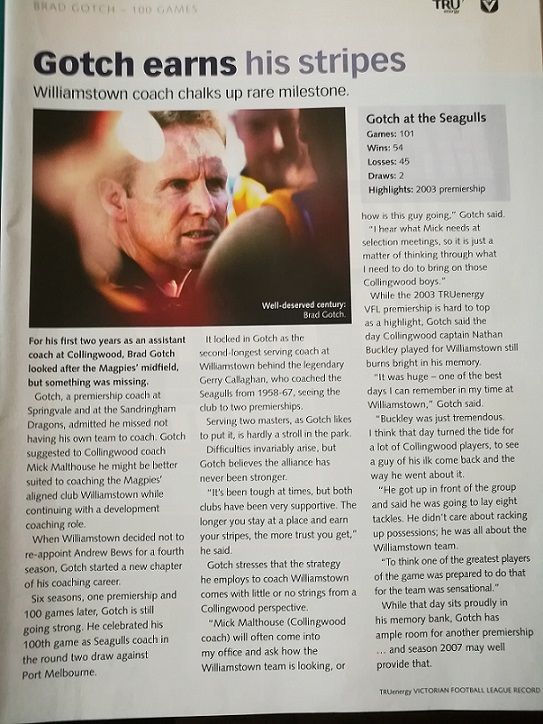 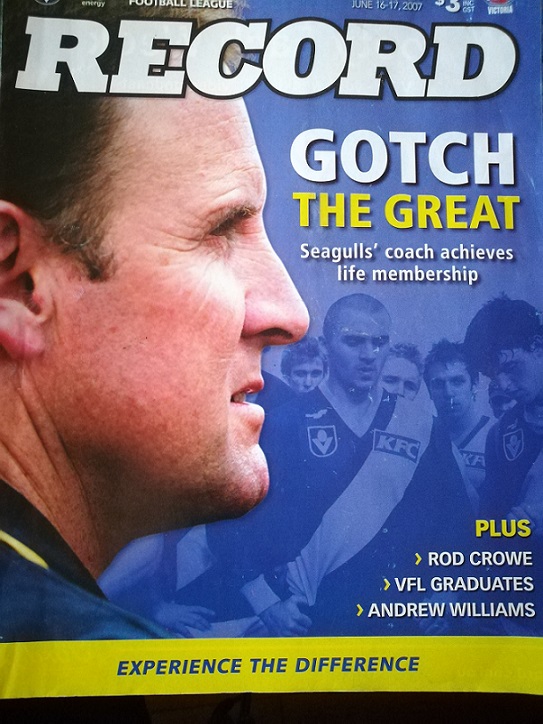 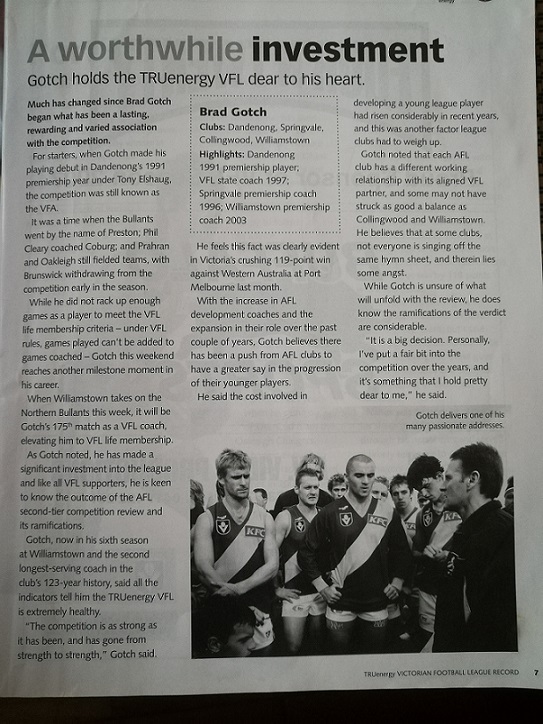 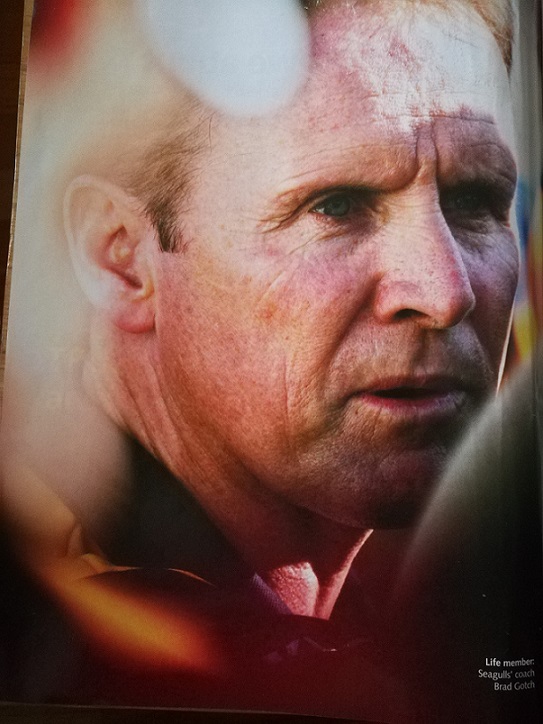 Williamstown coach Brad Gotch was awarded VFL life membership after coaching his 175th competition game in the round 10 clash with the Northern Bullants at Pt Gellibrand on June 17, which Williamstown won 16.20.116 to 5.6.36 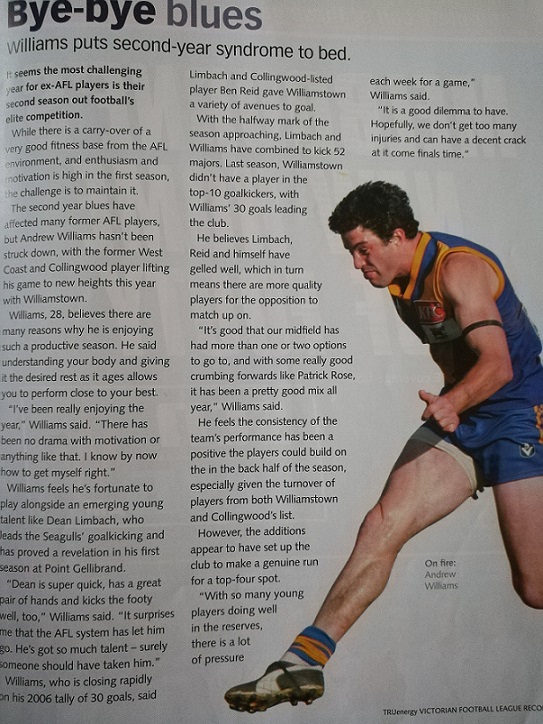 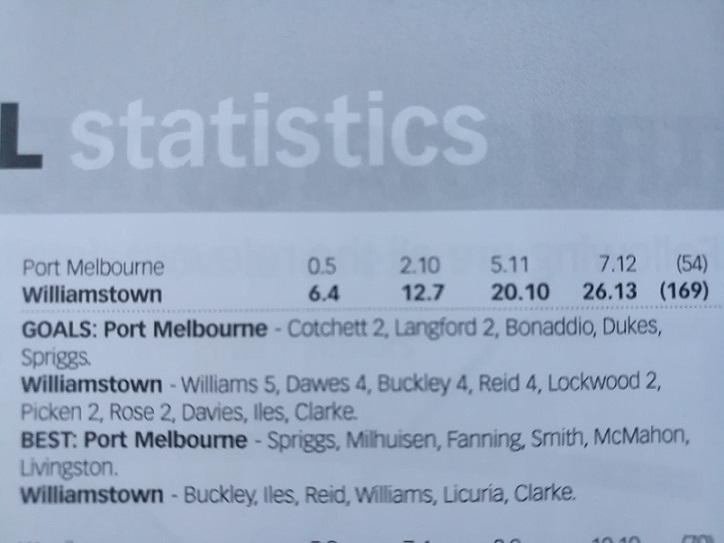 the round 19 clash at North Port Oval on August 18, kicking four goals and being named best-on-ground. 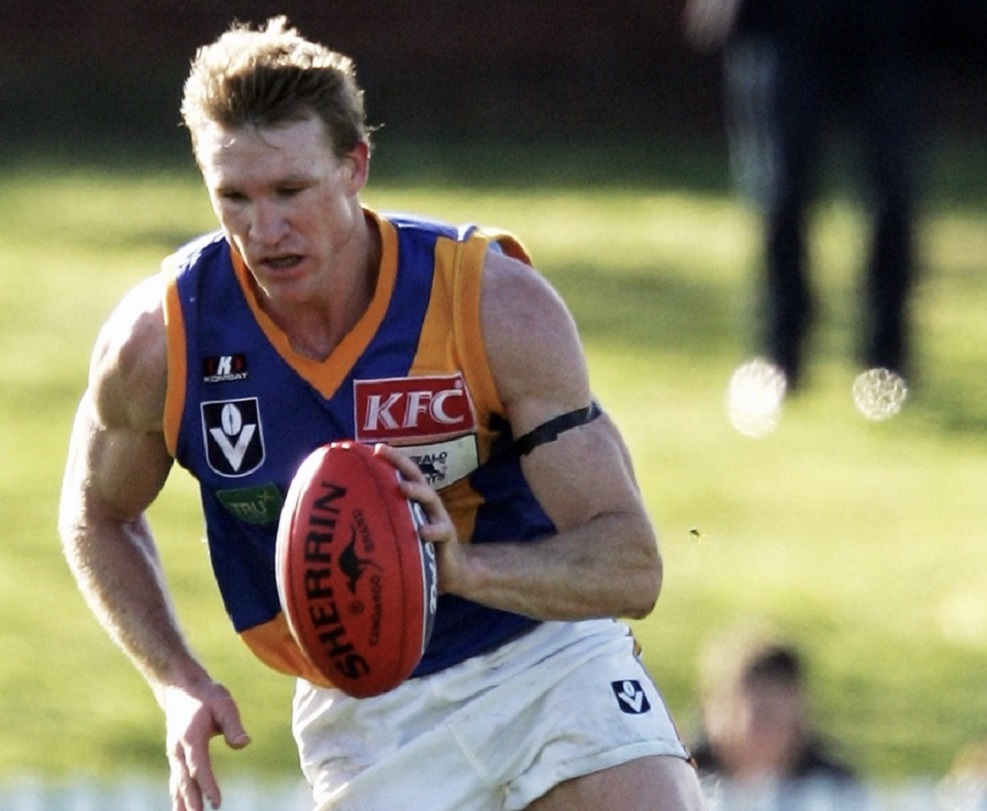 Nathan Buckley in action against Port Melbourne in round 19 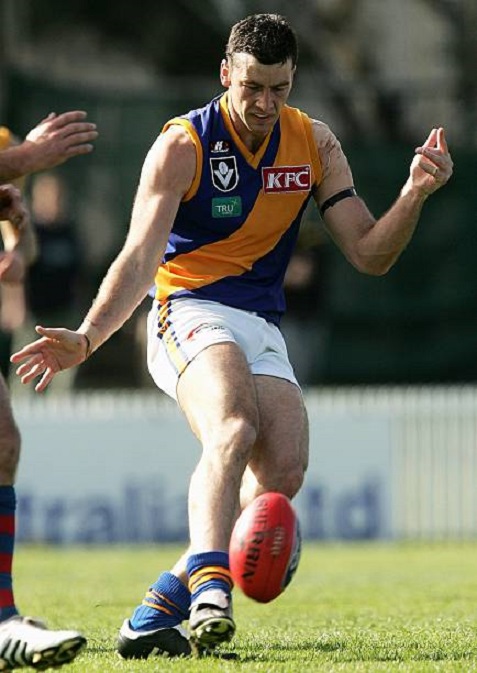 Collingwood's Simon Prestigiacomo also played for Williamstown in round 19 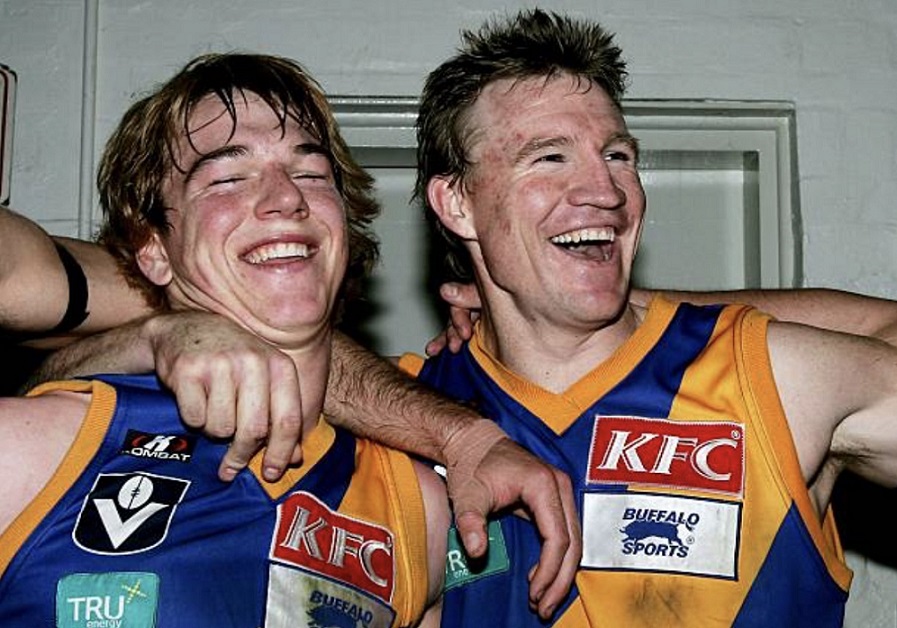 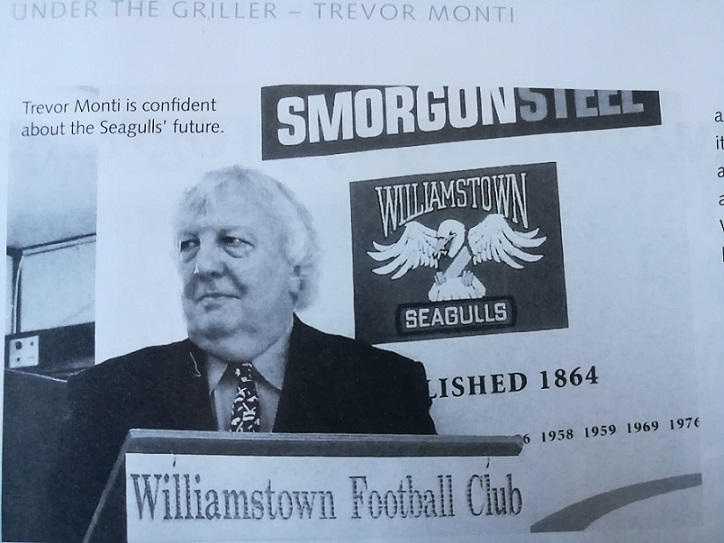 Trevor Monti, president of Williamstown from 1999. 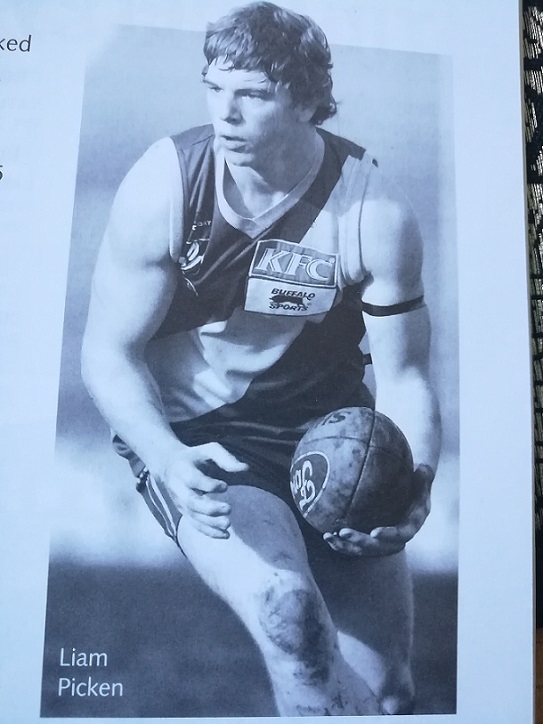 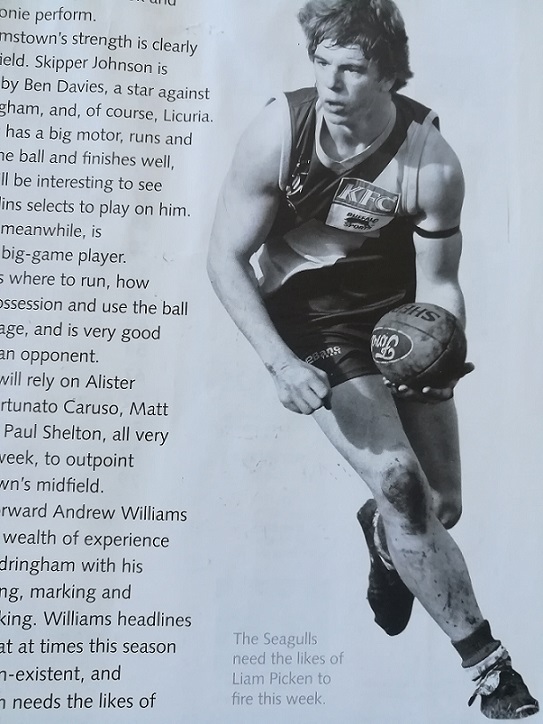 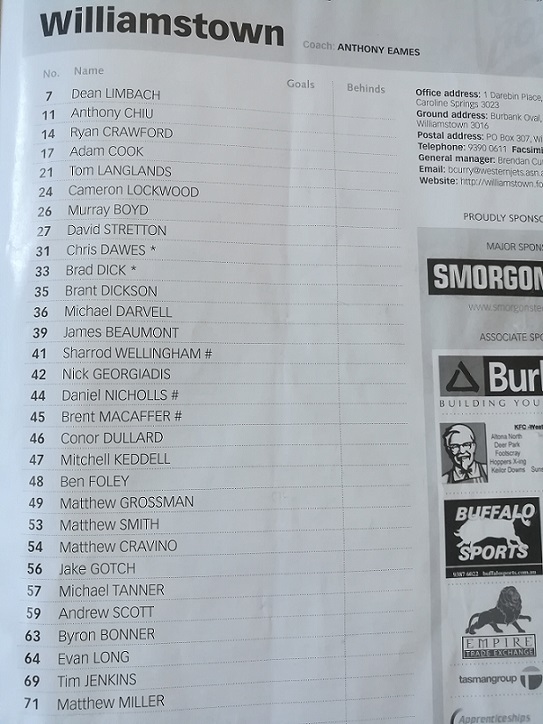 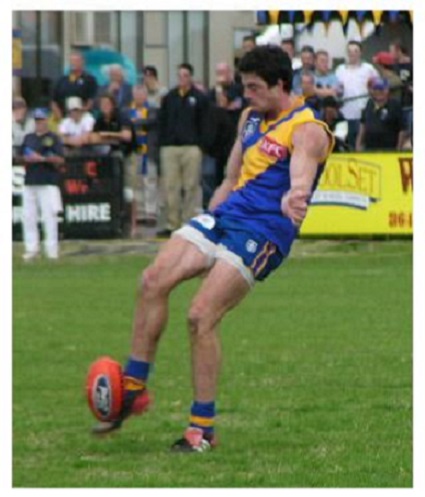 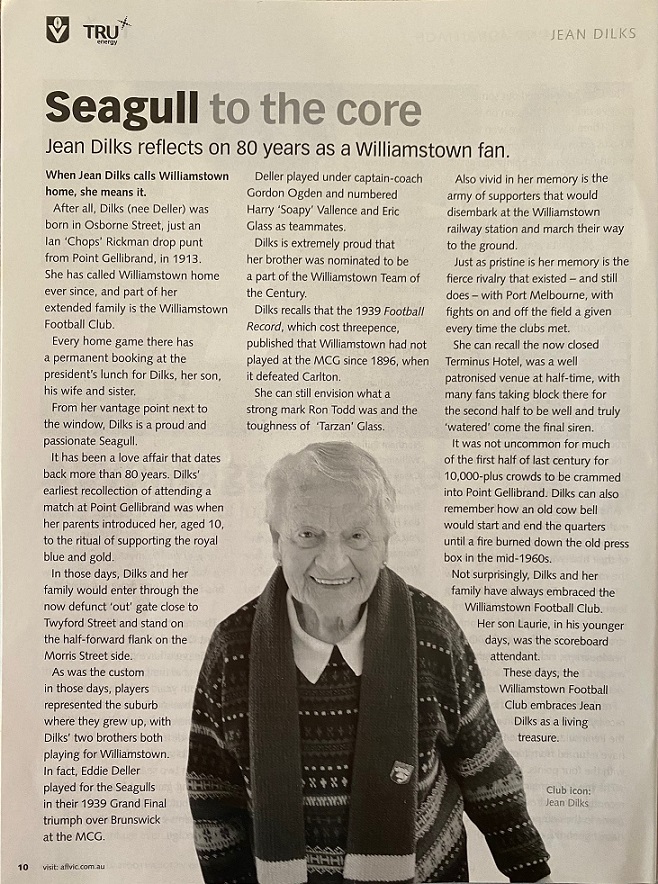