With the cessation of the AFL reserves competition, eighteen clubs competed in the VFL in the 2000 season with the addition of seconds teams from Carlton, Collingwood, Essendon, Geelong, Richmond and St Kilda, along with the Murray Kangaroos. Coburg formed a partnership with the old Fitzroy club to play as the Coburg-Fitzroy Lions and Preston became the Northern Bullants. There were four stand-alone VFL clubs in Bendigo, Frankston, North Ballarat and Springvale, and alignments between Melbourne/Sandringham, Hawthorn/Box Hill, Port Melbourne/Sydney and Western Bulldogs/Werribee/Williamstown. There was a 19 game home-and-away season and a final eight system was adopted to decide the premiership. There was also an experiment with Monday night football at Waverley which was televised on Optus pay-TV but it only lasted the one season.

Brad Lloyd returned to the Club after trying out with Hawthorn, where he won the Gardiner Medal for the League Reserves best and fairest player in 1997. Craig Smoker was also recruited from Melbourne while Craig Anderson (Collingwood Seconds) and Scott Ralph (Brisbane Lions Seconds) were other newcomers. Players departing included Danny Del Re after 114 games and 246 goals, 1995 best and fairest and Fothergill-Round medallist Julian Shanks, 100-game player Ritchie Hore, assistant coach, Keenan Reynolds, Darren Stanley (Melton), Lazar Vidovic, and Sedat Sir and Steve Zavalas (both to Parkside). Andrew Bews continued on as coach and Troy West replaced Saade Ghazi as captain with Lloyd as vice-captain and Scott Taylor and Michael Brown as deputy vice-captains. Bruce Davis returned to the Club as an assistant coach and also coach of the reserves, replacing Mick Baker who went back to Spotswood as senior coach. Mark Hunter also stepped down as an assistant coach and was replaced by former Geelong and South Adelaide utility, Darren Troy. Terry Maloney was once again team manager of both the Firsts and Seconds.

As in the previous season, Williamstown made an impressive start with a 6-goal win over Werribee at Whitten Oval in the opening round (Smoker 5 goals on debut), a 33-point victory against the Murray Kangaroos and a big victory over Collingwood by 9 goals in round 3. A 5-goal win against Richmond at Williamstown followed by a 7-goal victory over Springvale at Waverley preceded the first defeat in the sixth round at the hands of St Kilda by just two points. A big loss at North Ballarat where the Seagulls kicked just 2.10.22 preceded a 100-point win over Essendon in round 8. Yet another defeat to Frankston was followed by wins over Bendigo, Coburg-Fitzroy and then a narrow loss to Box Hill in round 12 before a victory over Sandringham at Pt Gellibrand. The home-and-away rounds concluded with four consecutive wins over Geelong, Port Melbourne, Northern Bullants and a huge victory over Collingwood in round 19 by 81 points. The Seagulls finished up with thirteen wins and six losses for the year to finish in sixth place on the ladder and a return to finals football for the first time since 1996. The Reserves also made the finals, finishing in sixth spot with just eight wins and nine defeats. Former captain, best and fairest winner, leading goalkicker and Liston Medal winner, Saade Ghazi, played his 200th senior game in the round 17 game at Port Melbourne which the Seagulls won by two goals, largely due to the seven majors kicked by Bulldog Steve Kolynuik.

The first semi-final the following week against Carlton at North Port Oval was disastrous with the Seagulls going down badly, 19.11.125 to 7.9.51. This game marked the end of veteran rover Saade Ghazi’s eleven-year career with ‘Town, during which he played 204 matches to finish as one of only three players to amass 200 games in Royal Blue and Gold, behind Ray Smith on 205 and in front of Tom Russell on 200. (Troy West and Ben Jolley would later join this trio in the 200-game club). Records of games played were not kept until Larry Floyd began the practice in the 1930’s, so it is possible that long-serving players such as Walter Warren, who played for fifteen seasons and was captain five times during the 1880’s and 1890’s, could have played more games than any of these men. Warren, one of six brothers to play for Williamstown, passed away in 1953 at the age of eighty and won the Club goalkicking in 1892-96 and 1898-99.

Williamstown’s best and fairest award, known since 1951 as the Andy Taylor Memorial Trophy, was renamed the Gerry Callahan Medal in honour of the former champion player and coach of the period 1951-67. It was taken out by Brad Lloyd by one vote from Christin Macri with Troy West in third place. Macri led the goalkicking with a total of 35 and Lloyd was also awarded the Ron James Memorial Trophy as most valuable player at the Club.

The Reserves exited the finals in the first week as a result of a massive defeat from Port Melbourne, going down 26.17.173 to 10.6.66. The Bill Sheahan Memorial Trophy for best and fairest in the Seconds was won by Matthew Montebello from Luke Collins and Nathan Tresize.

One highlight of the 2000 season was the release of the CD ‘Anthem For a Seafaring Man’, which was a musical history of the Club written by Reserves coach Bruce Davis, who was awarded the Bill 'Darkie' Raffle Memorial Trophy as best clubman for his efforts.

At the end of the 2000 season, the Western Bulldogs decided to cease the dual alignment with Williamstown and Werribee and opt to align with the 'Bees only. The Seagulls sounded out three AFL clubs about an alignment going forward and eventually decided on Collingwood and an agreement for three years was signed before the end of the year. 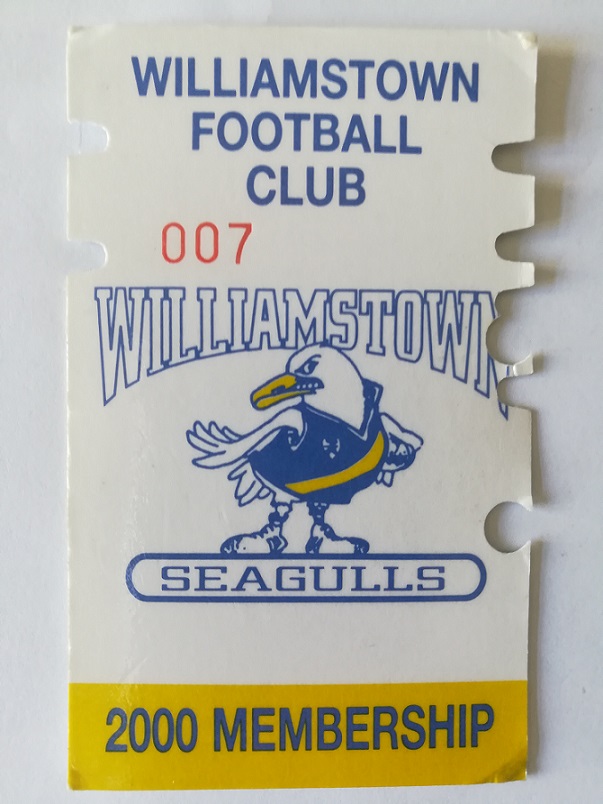 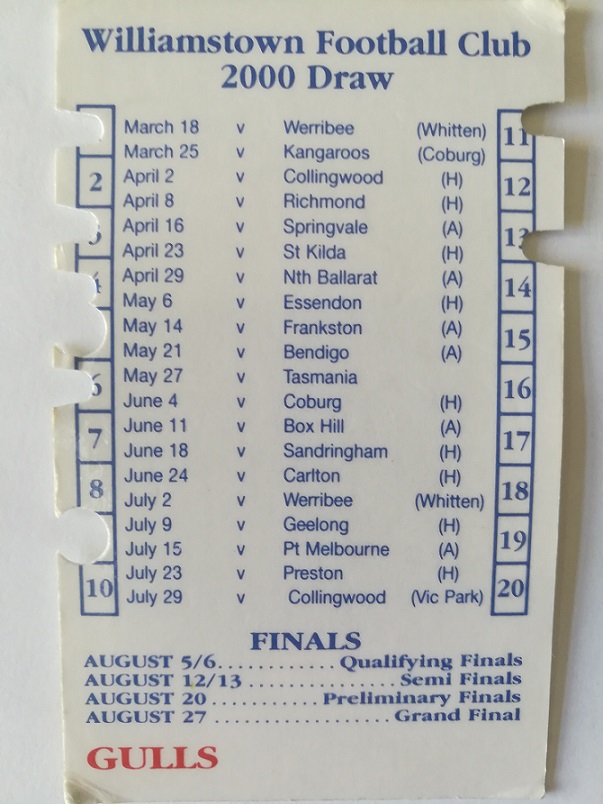 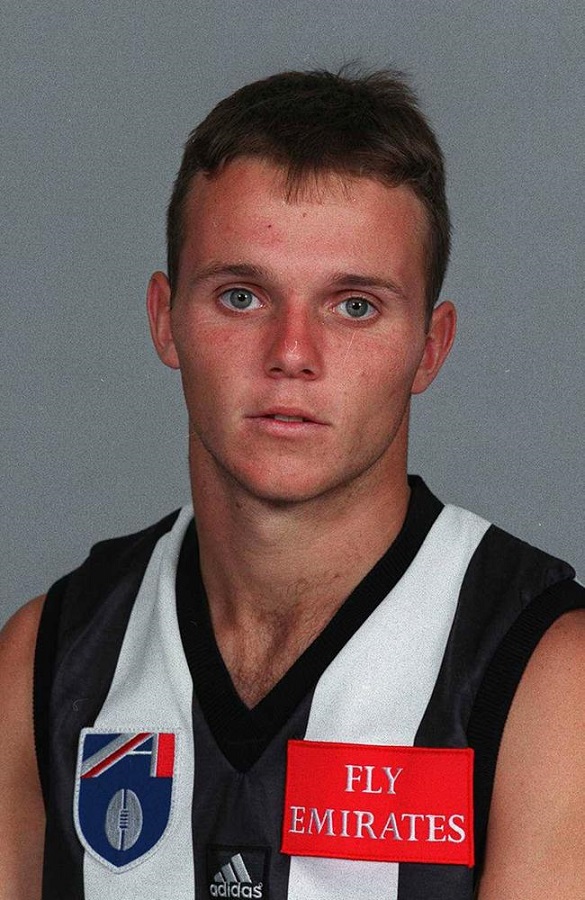 Craig Anderson was recruited in 2000 from Collingwood Seconds. Originally from Alphington Juniors, Anderson played with Northern Knights in 1997 and then with Essendon Seconds in 1998. He would go on to play 62 games with the Seagulls up until the end of 2003, kicking 36 goals, being runner-up in the best and fairest in 2001 and taking out the Ron James MVP the same year before crossing to Epping in 2004. 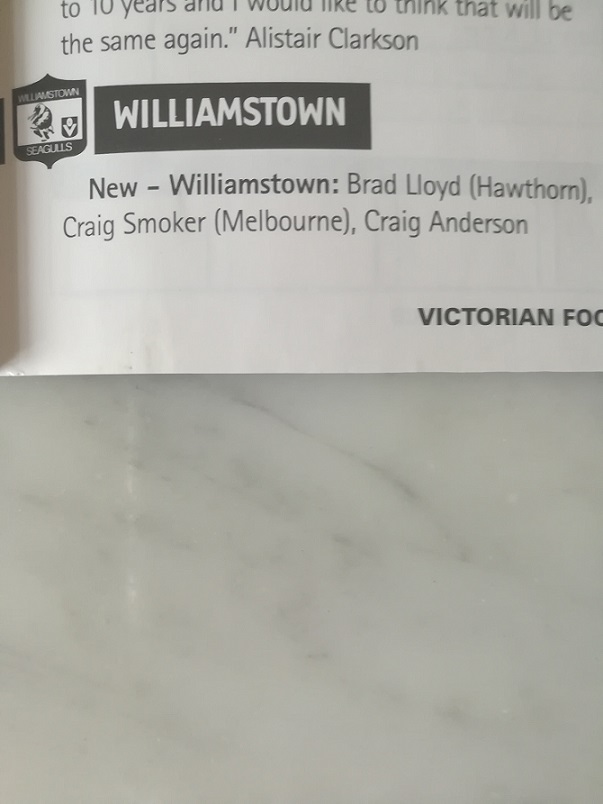 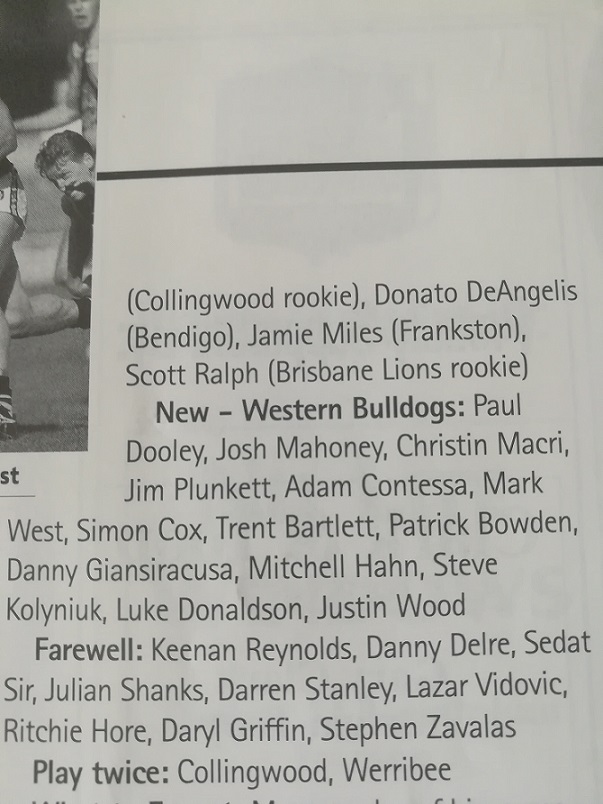 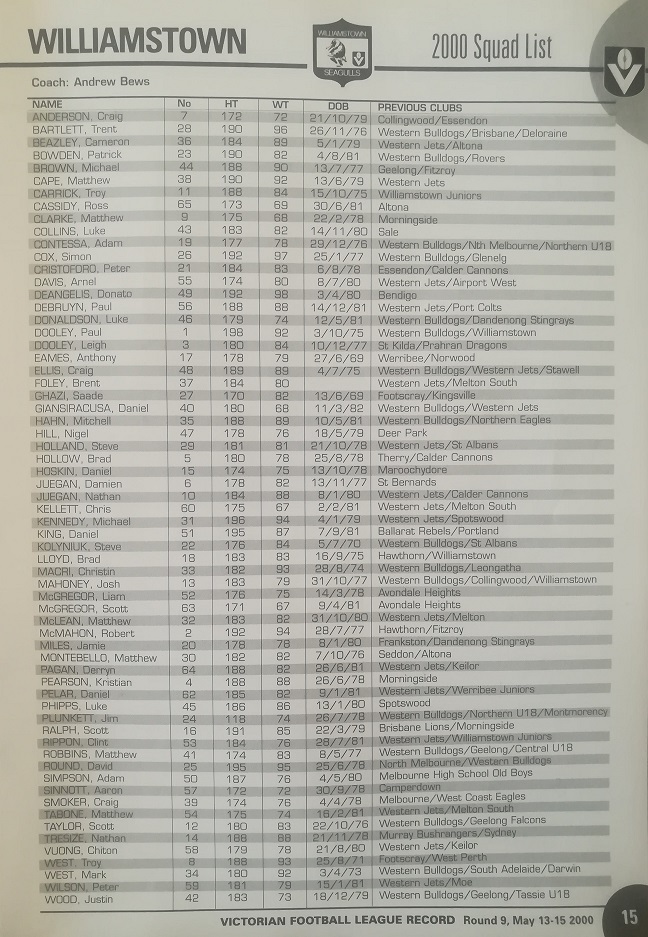 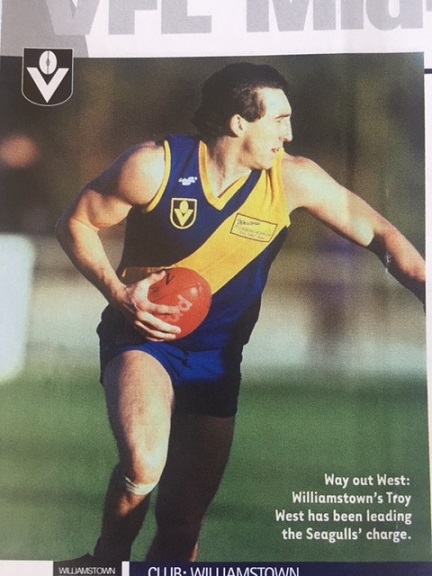 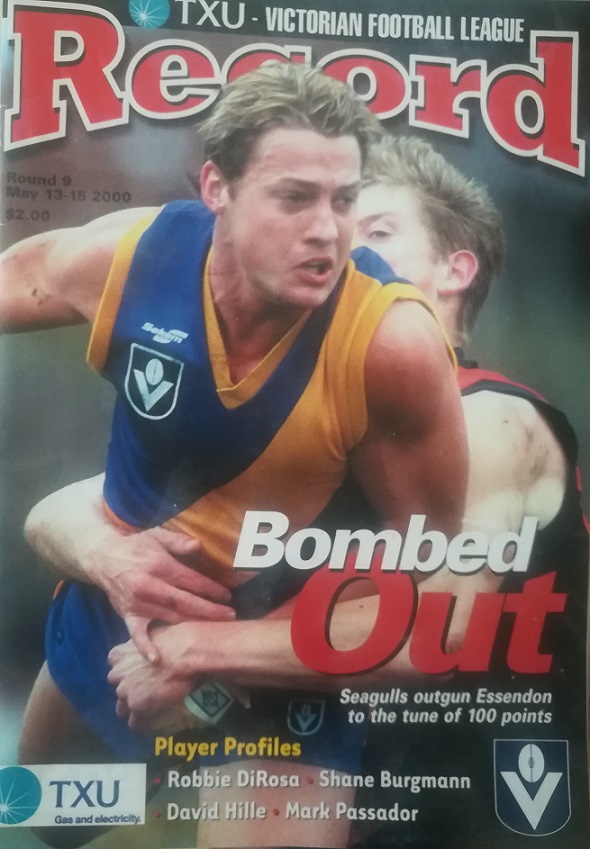 Scores from the round 8 match at Williamstown against Essendon. 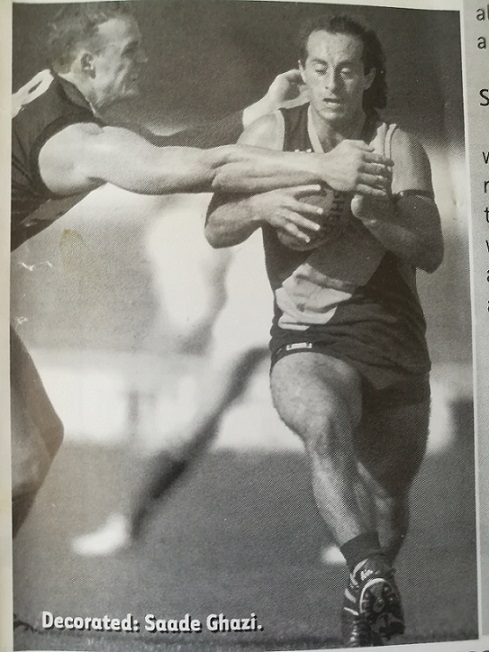 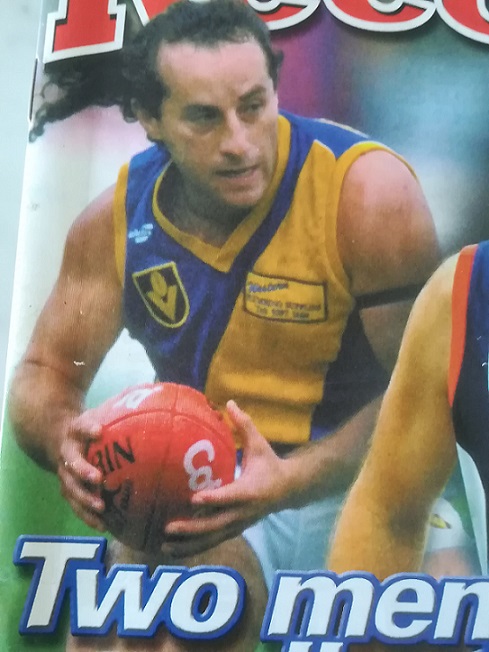 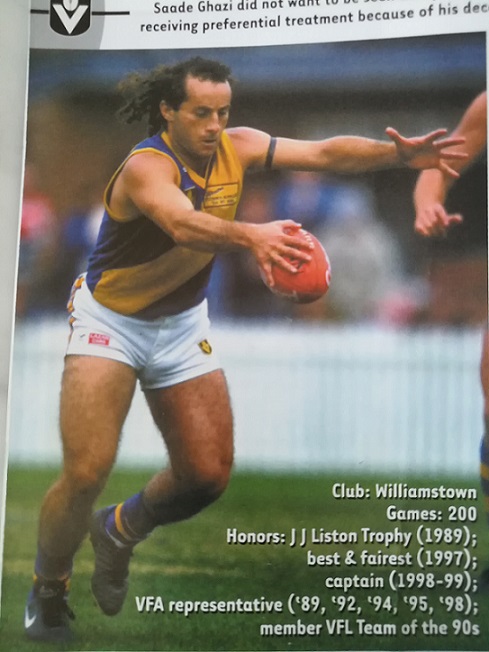 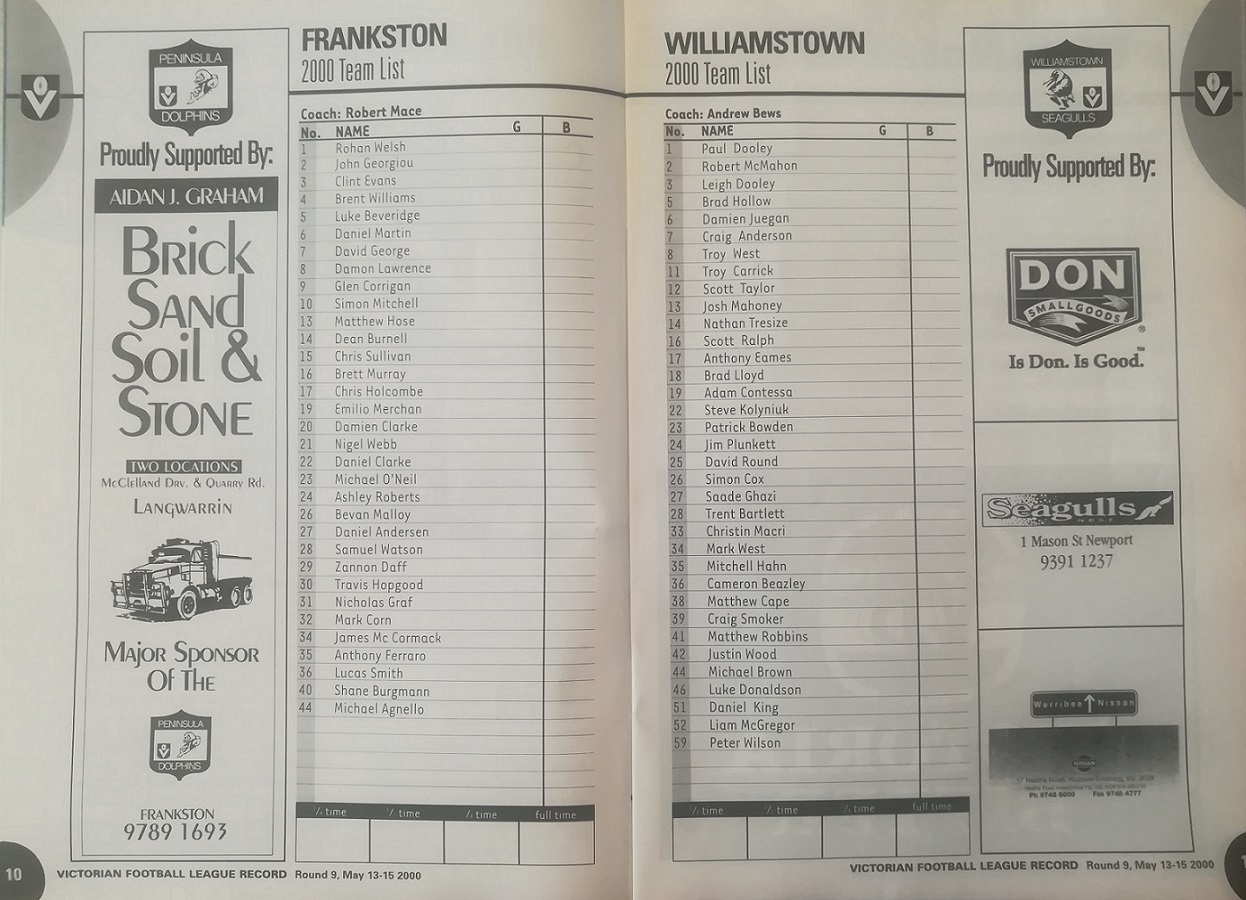 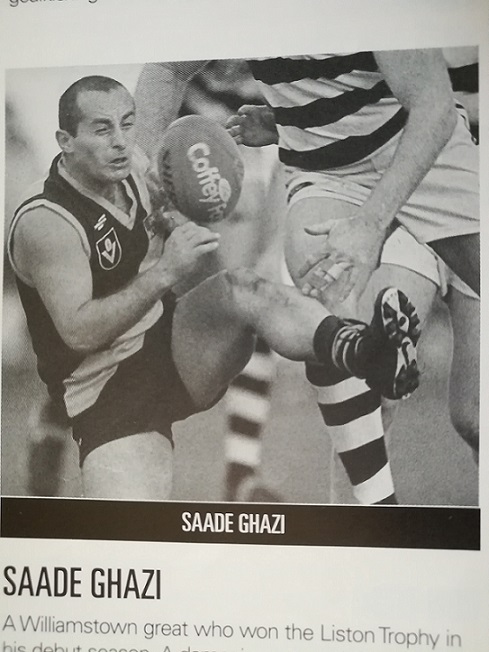 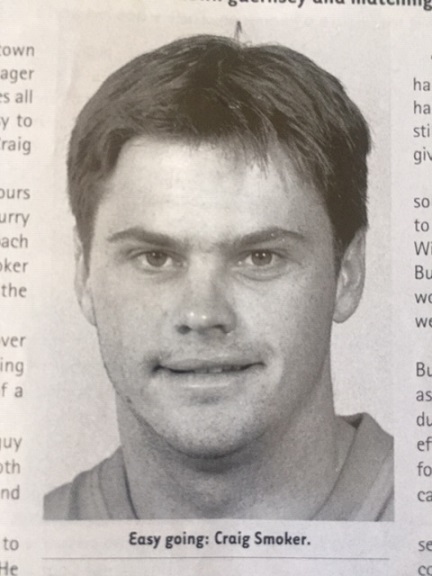 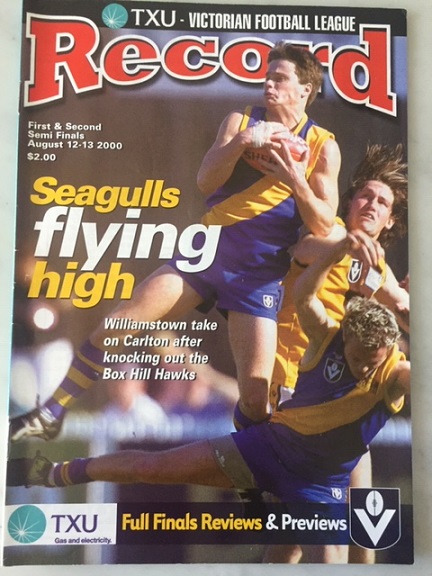 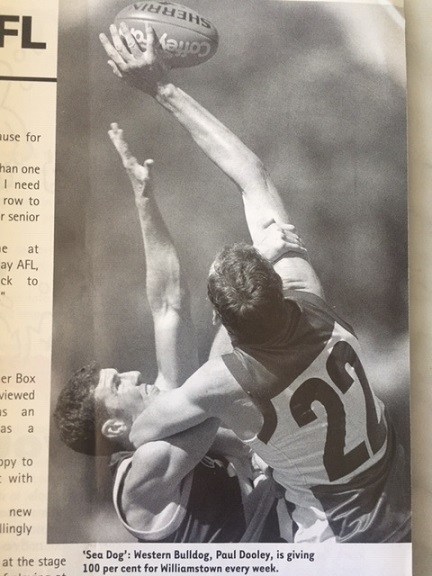 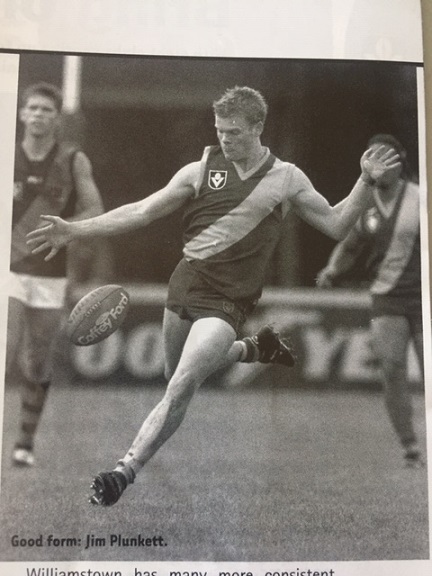 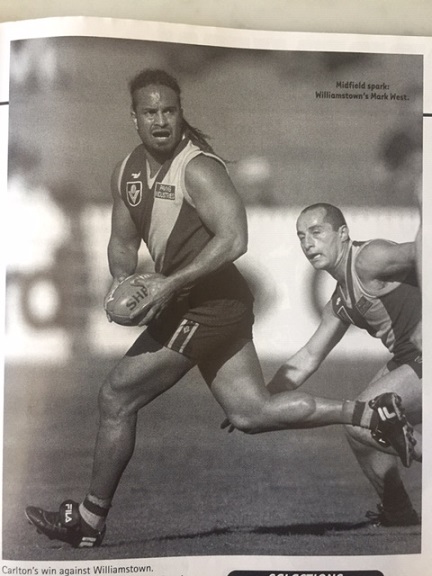 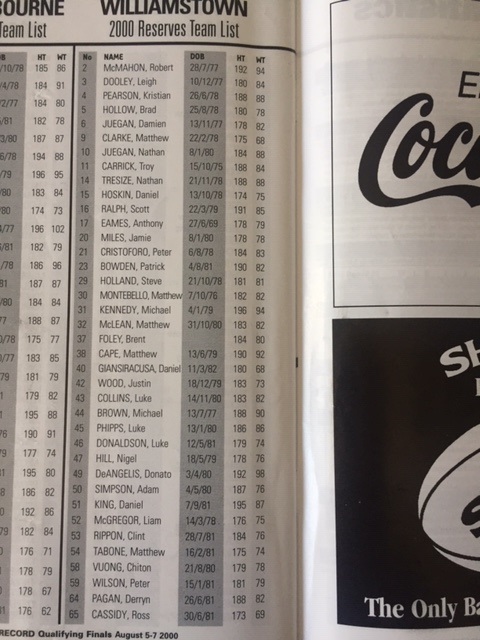 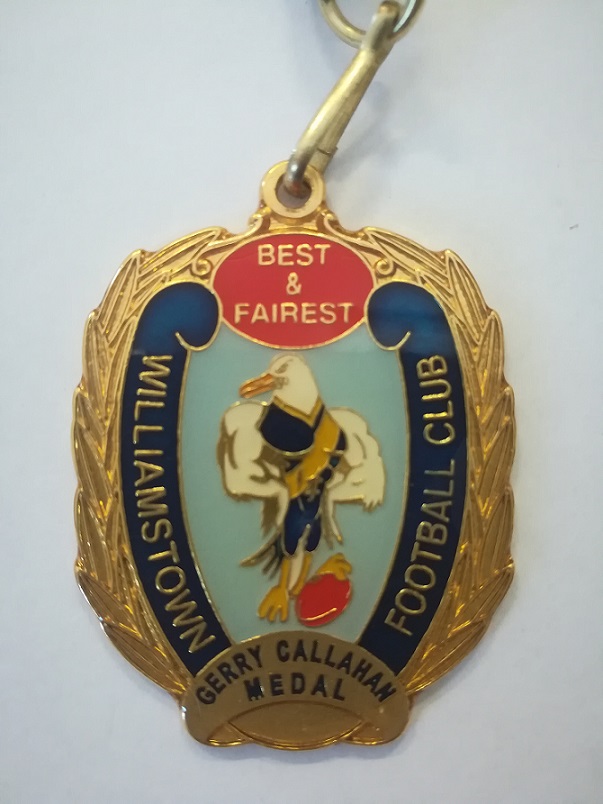 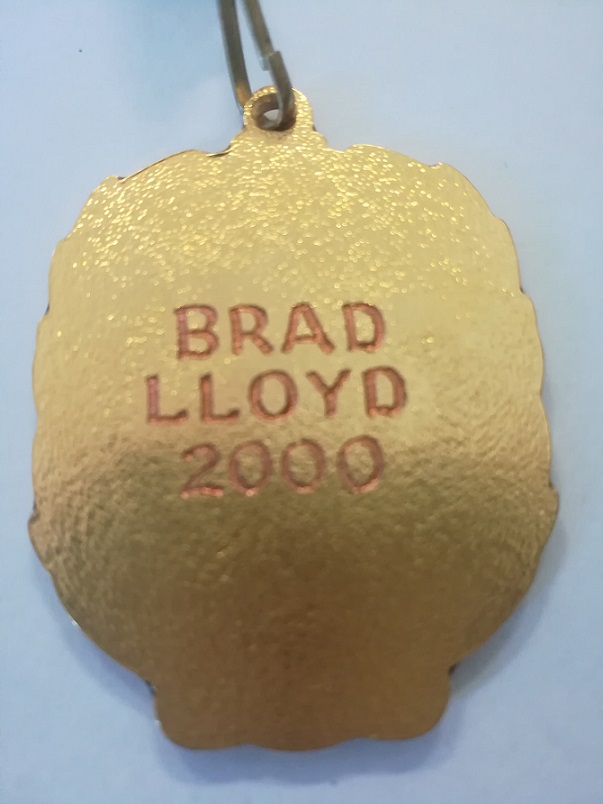 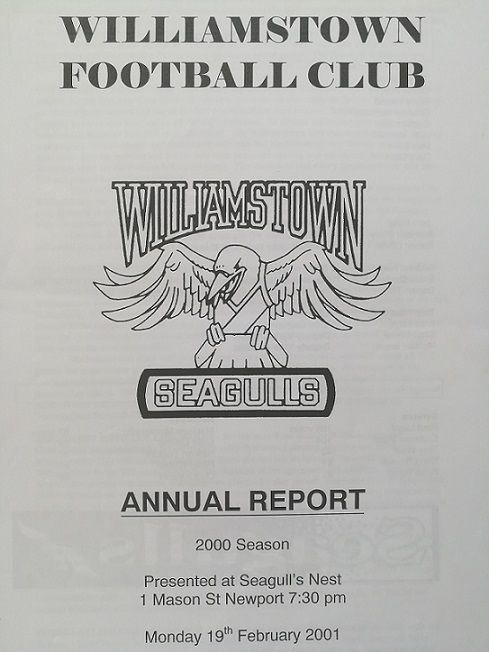 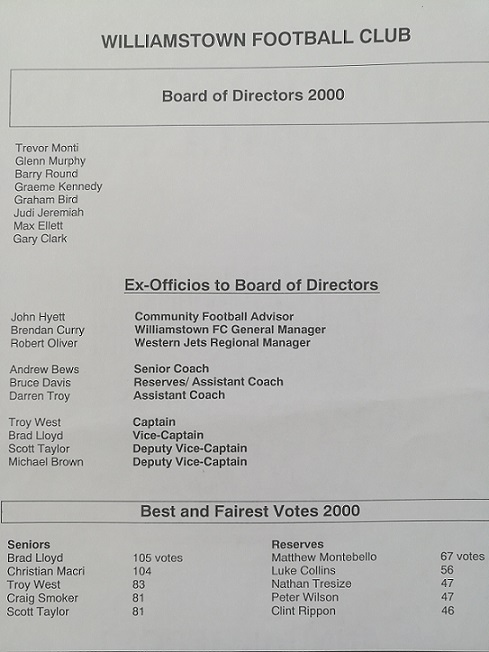 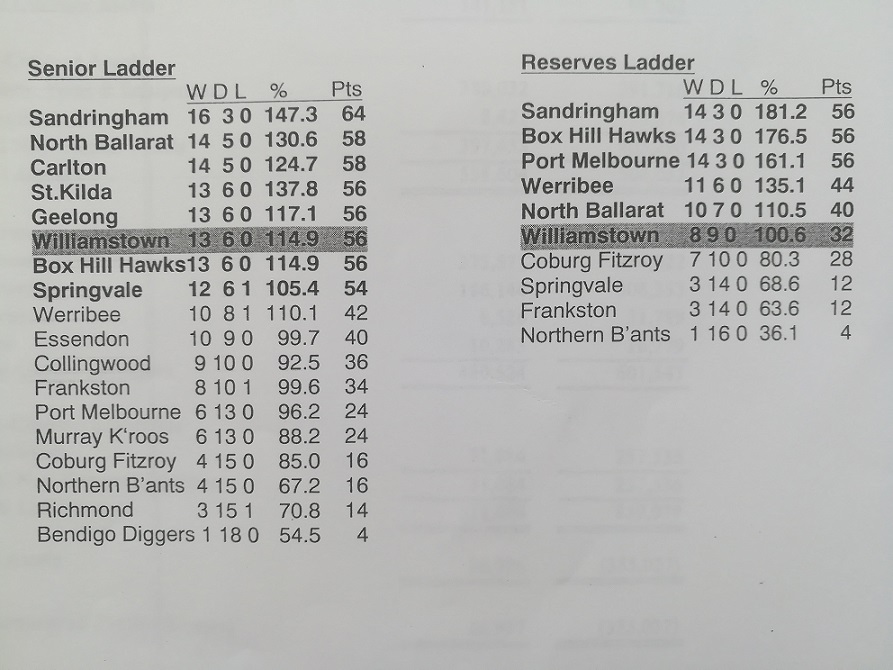