The Jim 'Frosty' Miller Medal was struck as a new award for the leading goalkicker in the home-and-away season in 1999. The award was named after Dandenong full-forward Jim 'Frosty' Miller, who kicked 885 goals in a career spanning 1967–1977.

Cash-strapped Coburg entered a partnership with the Fitzroy Football Club during the season. Fitzroy, which had played in the VFA between 1884 and 1896, then in the VFL/AFL from 1897 until 1996, no longer operated a football team following the creation of the Brisbane Lions in late 1996, but it still had an administrative presence. Under what was effectively a sponsorship arrangement, Coburg became known as the Coburg-Fitzroy Lions, taking its new name at the beginning of August 1998. The club retained navy blue and red as its main colours, but adopted Fitzroy's red, royal blue and gold colours with the FFC monogram as an alternative strip.

With Merv Keane not being re-appointed senior coach after a 3-year stint, a new coaching set-up occurred in 1999 with the appointment of 282-game former Geelong and Brisbane star, Andrew Bews, with ex-Footscray and North Melbourne player, Keenan Reynolds, assistant coach. 100-game player and former best and fairest winner, Julian Shanks, returned to the Club after playing for Southport in the QAFL, while former St Kilda ruckman, Lazar Vidovic, joined the Club after recovering from a knee reconstruction in 1998. Barry Round's son, David, also returned to Williamstown after two seasons with the Western Bulldogs and then a year on North Melbourne's rookie list. Other recruits included Darren Stanley (Footscray, Coburg, Melton South), Sedat Sir and Scott Taylor (both Western Bulldogs).  Mick Baker was re-appointed reserves coach with former senior player, Tom McGowan, his assistant. Former Footscray player, Mark Hunter, also came on board as a seniors assistant coach and chairman of selectors. Terry Maloney was again team manager of both the Firsts and Seconds.

The Seagulls again won eight and lost 10 games in 1999 and finished just out of reach of the finals for the third year running, but in far different circumstances. This time they made a cracking start by winning the opening four games against Coburg, Werribee, Bendigo and Sandringham to sit second on the ladder under new coach, Andrew Bews, including a big six-goal win over the previous year's runner-up, Werribee, at Whitten Oval, but then managed only one win in the next eight encounters. Apart from a six-point loss to Coburg, most of the other defeats were by substantial margins. By round 15, 'Town had managed just two wins out of the previous 12 games although success against Box Hill and Preston in the last two games eased the disappointment of not fulfilling the initial promise shown by the team. The Seagulls finished in seventh position once again, missing out on the finals by three and a half games and almost 60 percentage points.

The undoubted highlight of the year was the form of David Round, who won the Club best and fairest, the Andy Taylor Memorial Trophy, only ten years after his father, Barry, had last won the award, from assistant coach Keenan Reynolds and Darren Stanley in third place. Vice-captain Danny Del Re again took out the goal-kicking honours for the year with a total of 49 to win the Bert Hodge Memorial Trophy. Deputy vice-captain Troy West was voted most valuable player for the second year in succession to take out the Ron James Memorial Trophy. Luke Phipps won the Bill Sheahan Memorial Trophy for best and fairest in the Reserves, from Luke Summers and Luke Collins, while Lorraine Davies was the first female to be awarded the Bill 'Darkie' Raffle Memorial Trophy for best clubperson.

Long-serving president Trevor Monti also began his reign in 1999 after Greg Swann resigned mid-season in order to take up a position with the inaugural board of Football Victoria before becoming CEO at Collingwood Football Club. 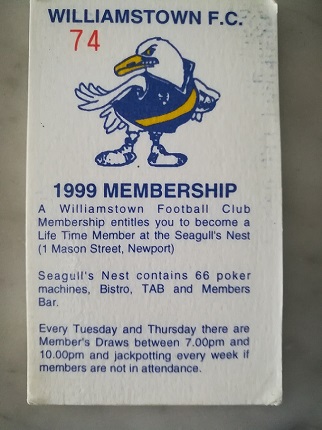 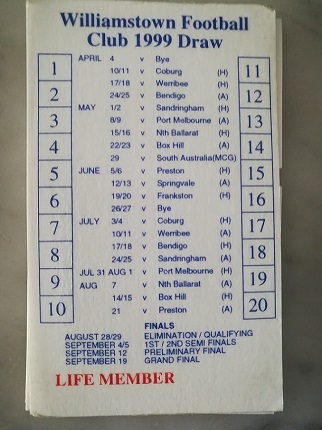 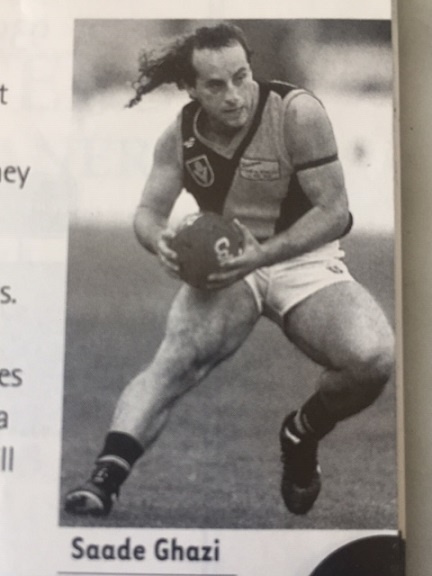 Saade Ghazi was Williamstown captain in 1999 for the second and final time. 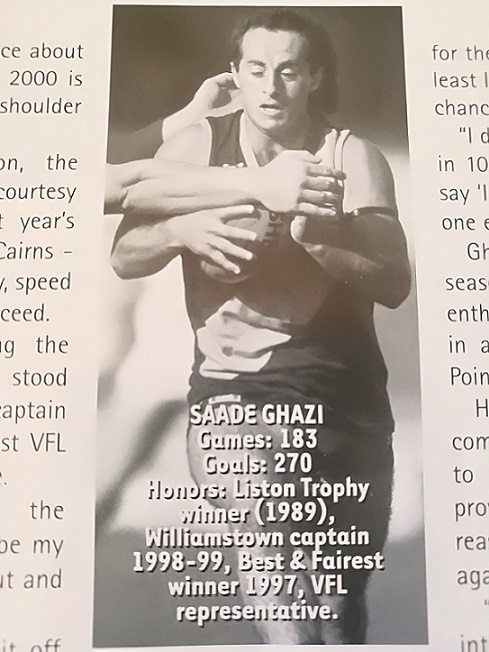 Saade Ghazi's playing record at the end of 1999, his penultimate playing year at Willi 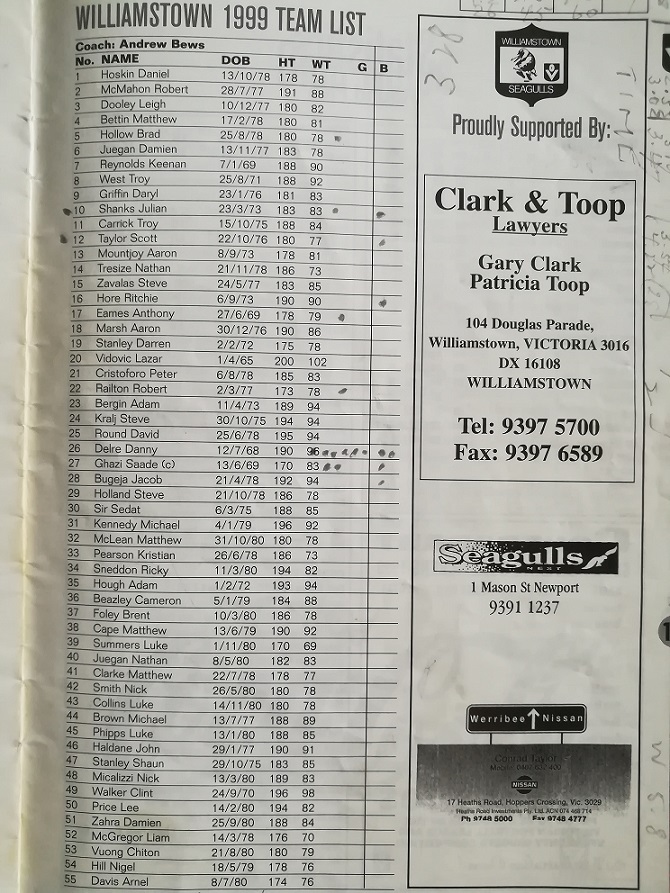 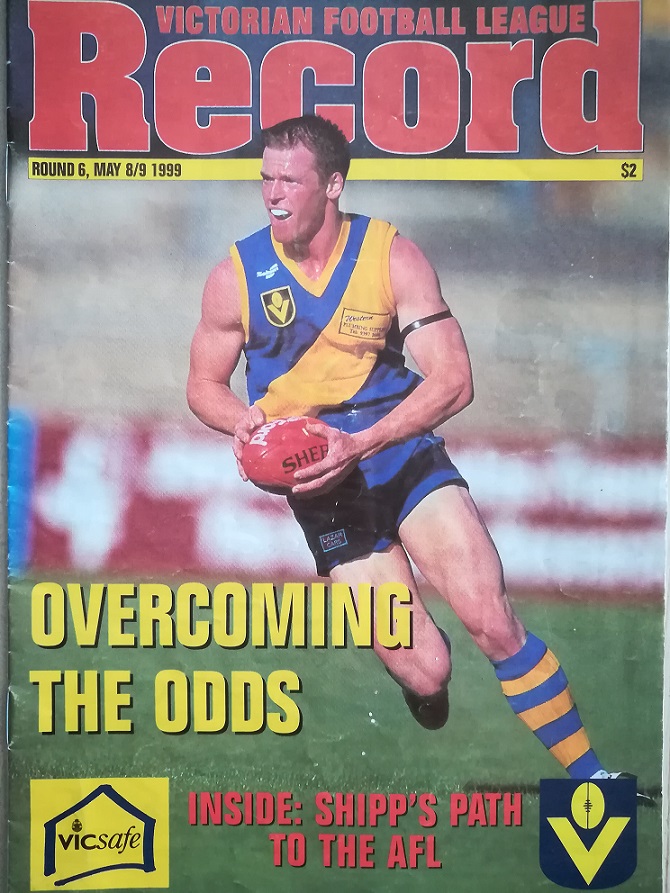 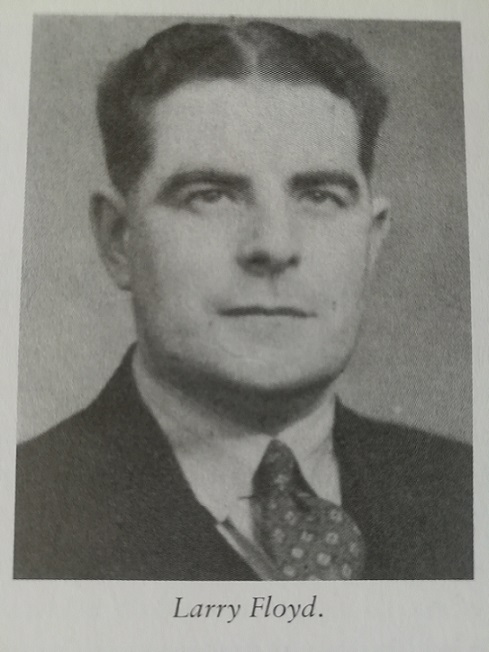 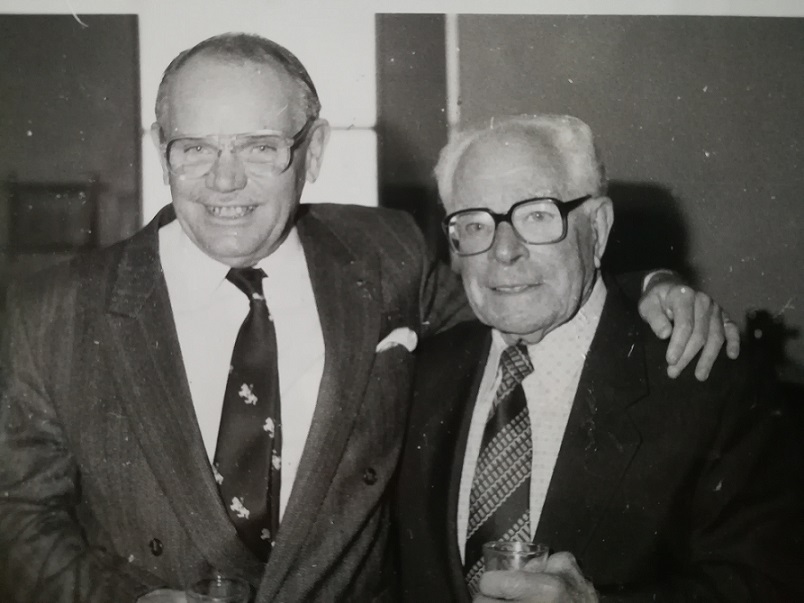 Secretary of the 1930's and 40's, Larry Floyd (right), passed away in October 1999 aged 91. Larry's love affair with Williamstown commenced in 1921 when he saw the local side take on Essendon Town at the Williamstown ground in their last season in the VFA. 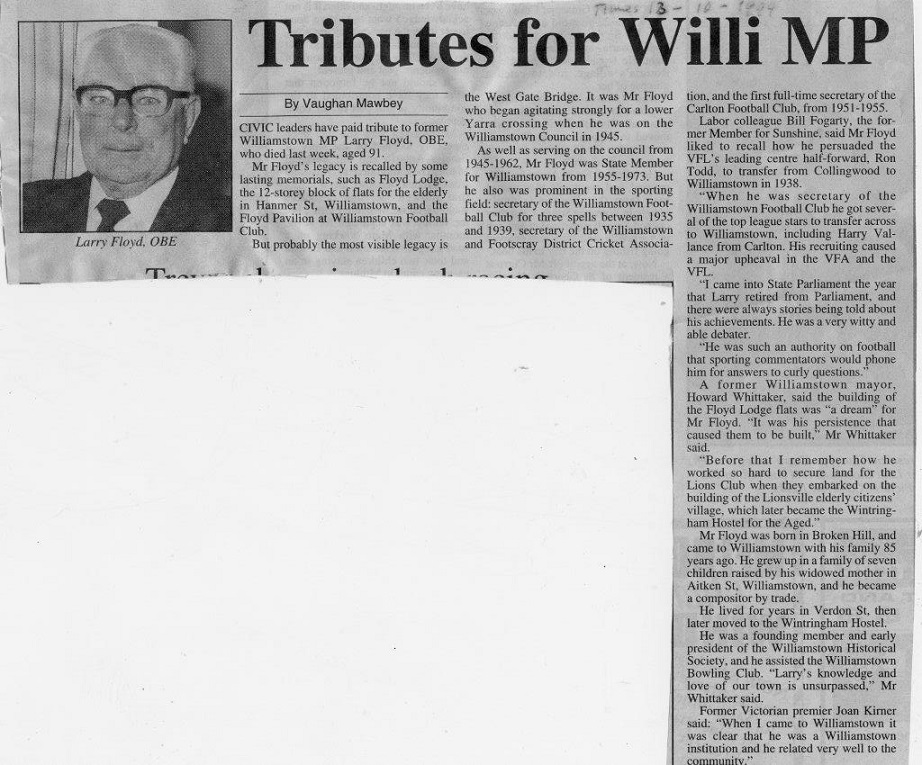 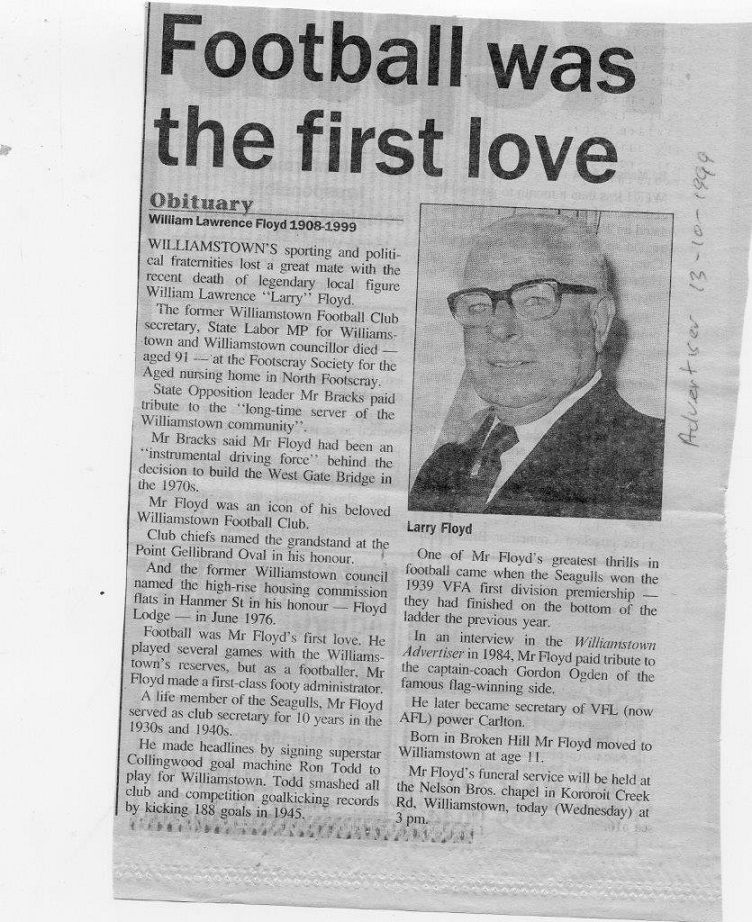 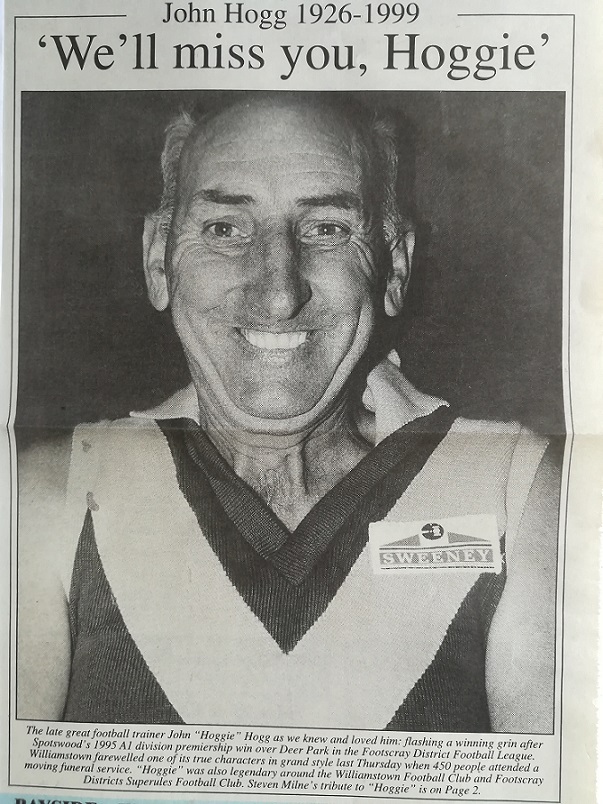 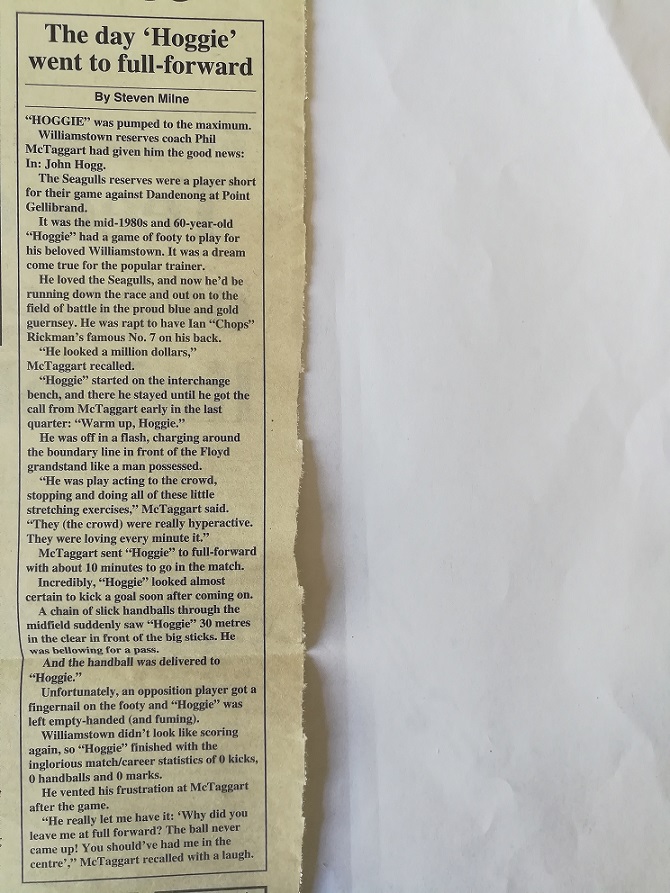 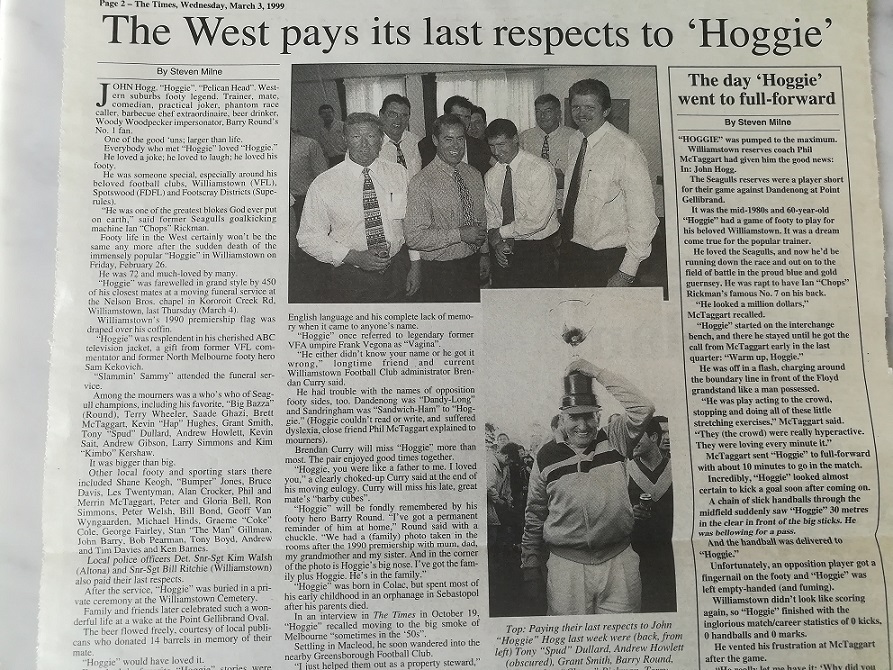 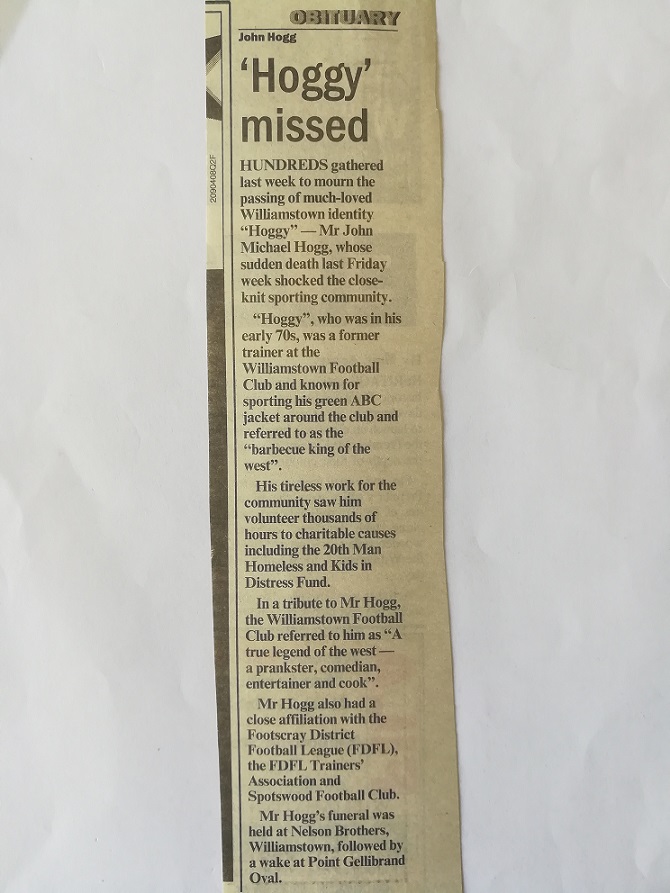 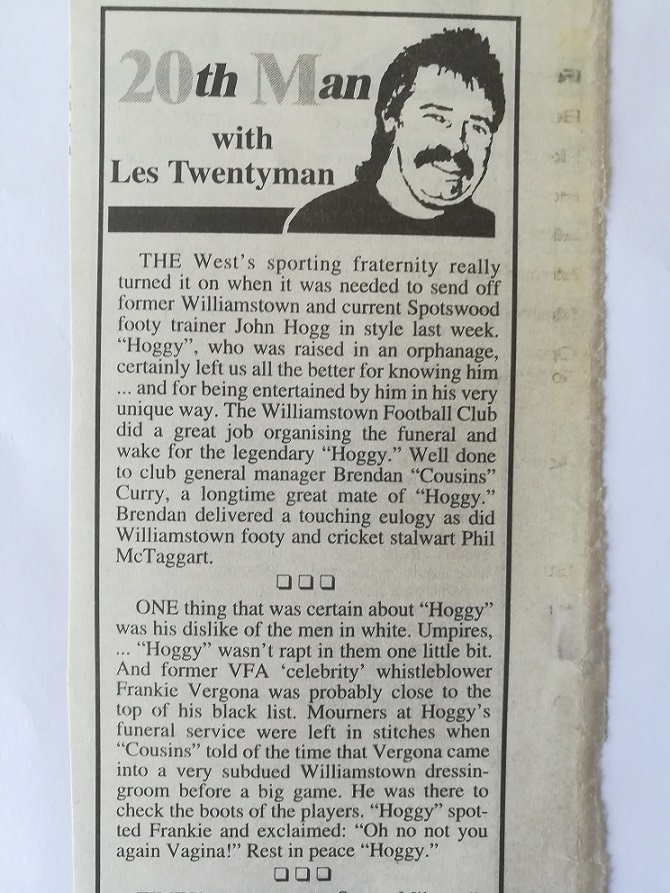 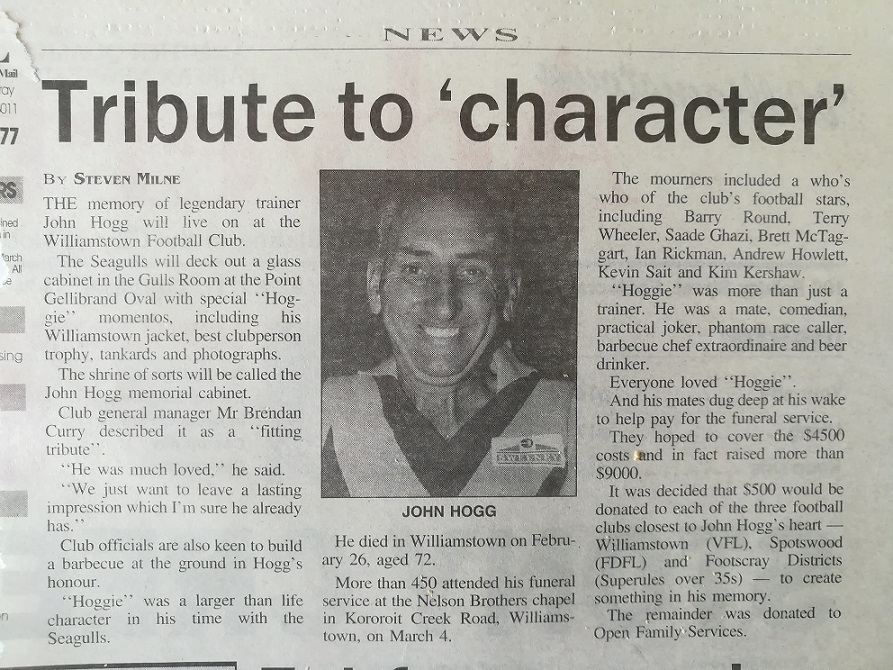 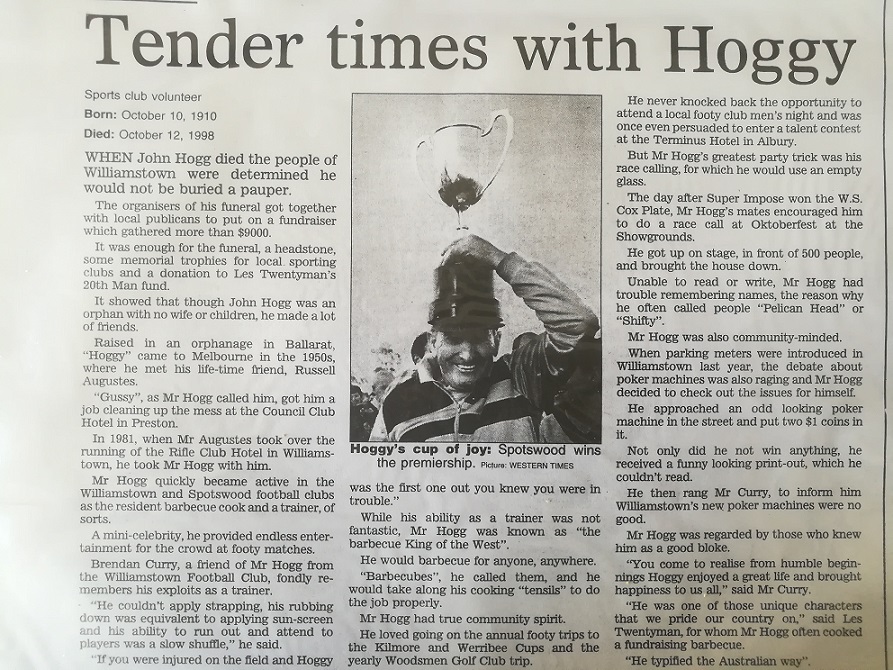 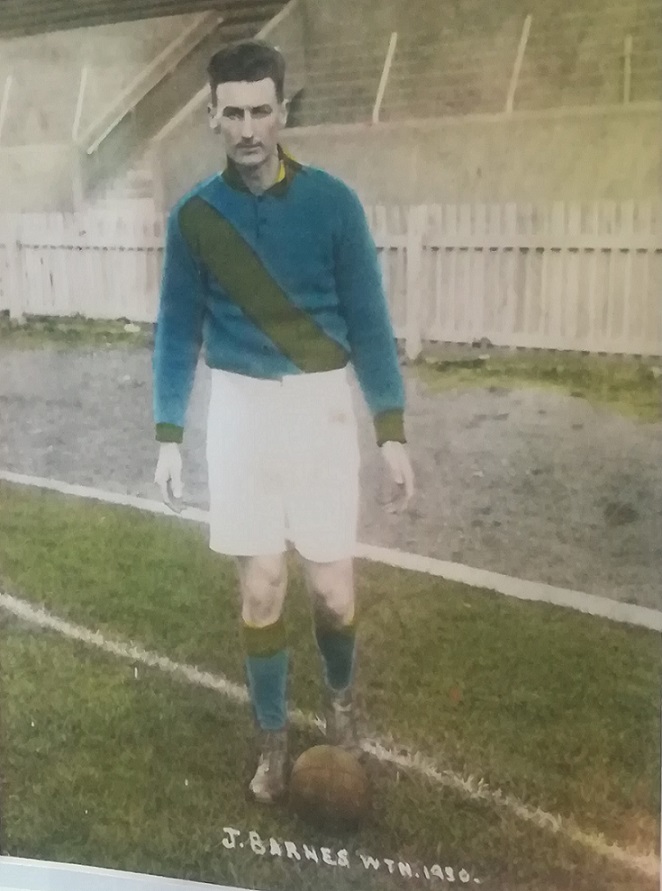 Jack Barnes, father of Ken & Ted Barnes, came to Williamstown from South Melbourne in 1930 and played 67 games and kicked 79 goals up until he suddenly resigned during the 1934 season. He was captain for part of the 1931 & 1932 seasons and vice-captain for part of the 1931, 1932 and 1934 seasons. He transferred to Williamstown District, which was in the VFA sub-districts competition, as captain-coach after his resignation and won the league best & fairest award despite playing just six games. He was also a successful cricketer for South Melbourne and Williamstown, and played one game for Victoria against Tasmania at the MCG in 1930, making 51 in his only innings. Jack passed away on October 6, aged 94. 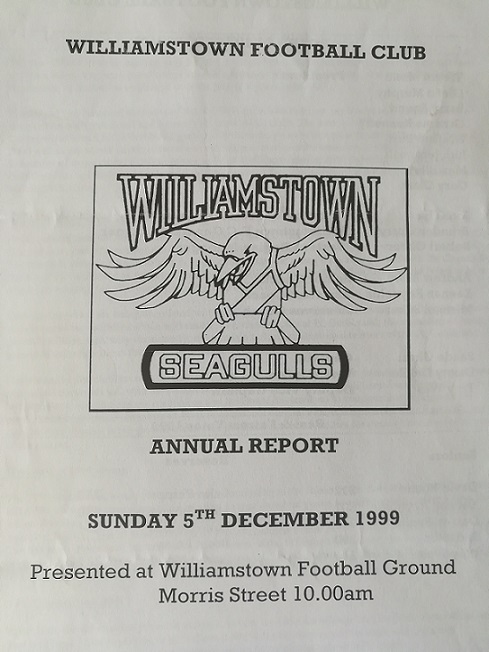 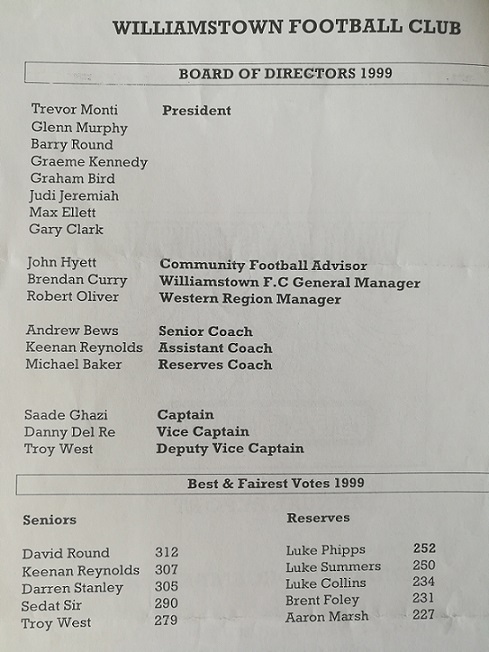