Werribee and Williamstown had been given an ultimatum in 1995 to agree to merger terms. If they could agree to terms for a merger, they would be compensated by having their competition fees waived in the near term; if they could not agree to terms for a merger, one would face expulsion. The clubs entered merger negotiations in good faith, but talks ultimately reached an impasse over the choice of home ground. Neither club would accept the other's as a permanent home and Werribee would not accept a solution in which matches were divided in the long-term between Point Gellibrand Oval and Chirnside Park, arguing that it would become an eternal cause of infighting within the merged committee if a binding decision on long-term home ground were not made at the time of the merger. The closest the clubs came to a merger agreement was a proposal to name the club the Williamstown-Werribee Football Club, compete in a blue and gold guernsey as the Western Seagulls, and split games between the two home grounds for two years before moving permanently to Chirnside Park in 1998 but Williamstown still refused to acquiesce on the issue of home ground. During the merger talks, rallies were held at Williamstown to protest the merger, attracting high-profile supporters including former Premier of Victoria and member for Williamstown Joan Kirner, and club members made it known that they would prefer to see the club wound up than merged.

On 26 October, following the failure of merger talks, the VSFL announced that the eighth licence would be awarded to Williamstown, and that Werribee would be expelled from the VFL. The announcement was met with considerable surprise, as most had expected Williamstown to be the club expelled: Williamstown, while historically strong, was in a weak position both on-field (winless in 1995) and off-field; while Werribee, historically weak but enjoying the benefits of population growth in the outer west, was thriving in the most successful period of its existence. Werribee president Bruce Montgomery believed his club to be stronger than Williamstown, and suspected political influences had contributed to the decision, and that although Werribee was $200,000 in debt at the time, it was solvent provided it was competing in the VFL.

Werribee fought back over the following two weeks to secure re-admission to the competition, and a rally in support of the club drew 2,500 fans. It put forward a proposal to compete stand-alone, with no affiliation to any Under-18 club, and with the support of the Wyndham Council for a $500,000 upgrade of Chirnside Park, but the VSFL board voted against the proposal on 5 November. Finally, the club considered its legal options, planning to argue that the VSFL had distributed its eight metropolitan licences irresponsibly, and that the changed nature of the merged Preston Bullants–Northern Knights club meant that it might not necessarily count amongst those eight metropolitan licences. After receiving advice that Werribee's challenge could be successful, the VSFL relented and agreed to grant Werribee re-admission. The terms of the re-admission were similar to Werribee's initial proposal, and it became the only club with no affiliation with any Under-18s team, nor any structure of local feeder teams.

Against this background, Williamstown was at home to Werribee in the opening round of the season.  After losing 17 consecutive games dating back to the second-last home-and-away round of 1994, the Seagulls, under new coach, former Richmond premiership player Merv Keane, won 12.12 to 8.13. Keane brought several players with him from the Western Jets, including Simon Kerry. The last time the two clubs met in the final round of the 1995 season, Werribee won by 104 points. A 26-point win at Traralgon followed and, before long, it was evident that the 'Town had reversed its dismal form of the previous year. Good performances in the second half of the season enabled the club to finish fourth on the ladder with 11 wins, 6 losses and a draw.

The draw, at Port Melbourne, was Williamstown's first against Port for exactly 100 years and was reflected by only 1.2 percent separating the two sides on the ladder at the end of the season. Williamstown and Port met in the elimination final with the 'Town triumphing by 12 points, 19.19.133 to 18.13.121. Video of this game can be seen by copying and pasting the following link into your internet browser:

This brought the Seagulls and Werribee together in the first semi-final, but this time the 'Bees won easily 13.19.97 to 9.5.59 to end Williamstown's season.

In addition to reaching the finals, Williamstown provided the Liston Trophy winner in Paul Dooley, whose great grandfather Bill Dooley had been the club president in 1945-46, and whose father Bill had played four games with the 'Town in 1965. In a breakout year, Paul also won the Andy Taylor Memorial Trophy for best and fairest, the Ron James Memorial Trophy as most valuable player and the Fothergill-Round Medal for the most outstanding young talent in the VFL.

The Club had two players in the top six goal-kickers for the season. They were Phil O'Keefe who finished third with 53 and won the Bert Hodge Memorial Trophy for club leading goalscorer, and Danny Del Re who was sixth with 45. The competition's leading goalscorer was former Williamstown spearhead, Jack Aziz, who booted 74 majors. Brian 'Pro' Hamment was awarded the Bill 'Darkie' Raffle Memorial Trophy for best clubman.

Long-serving administrator, Brendan Curry, took over as general manager in 1996. 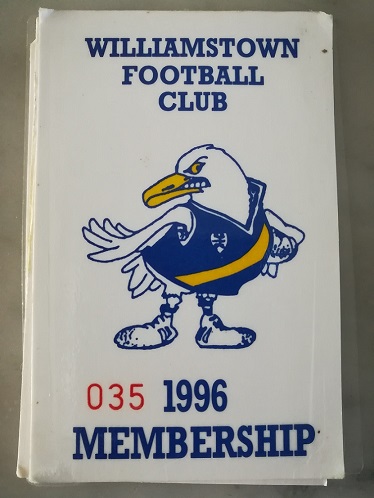 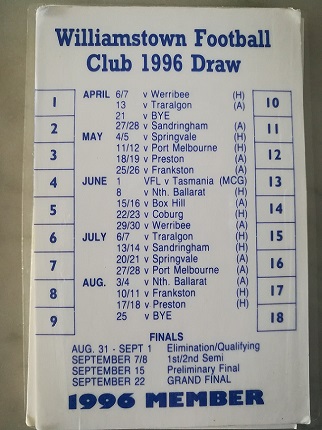 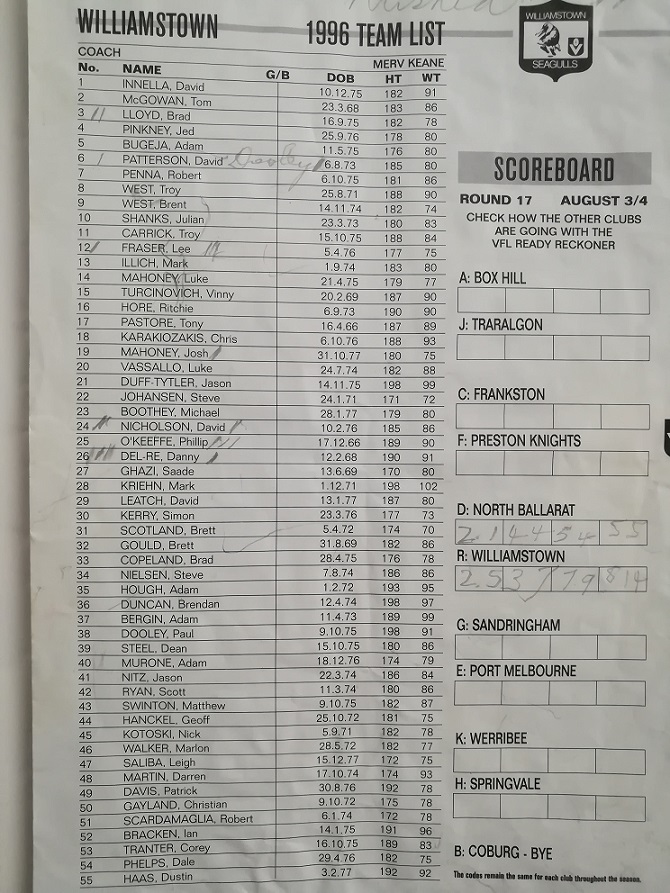 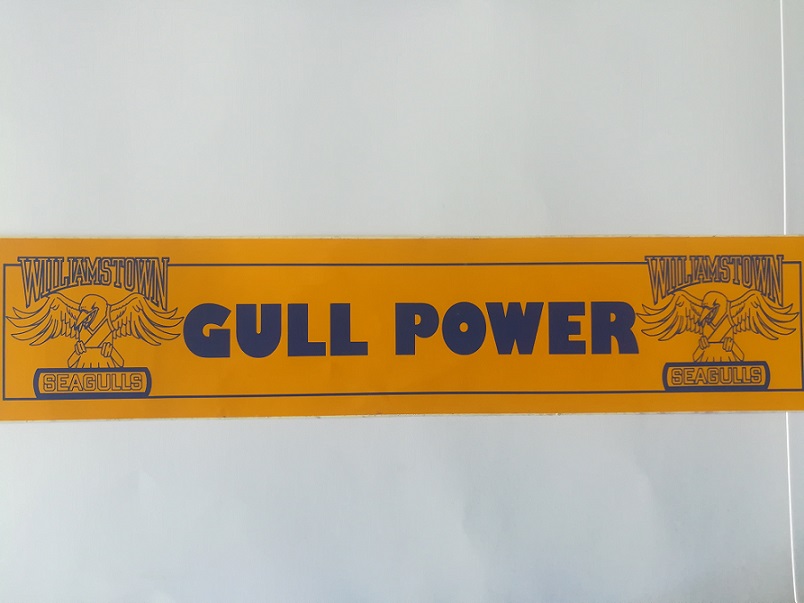 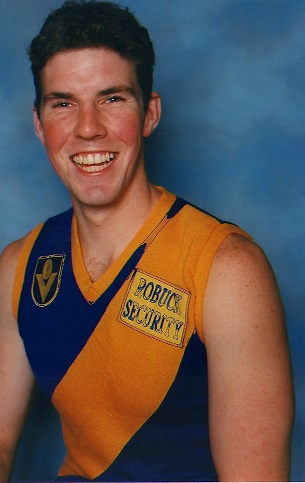 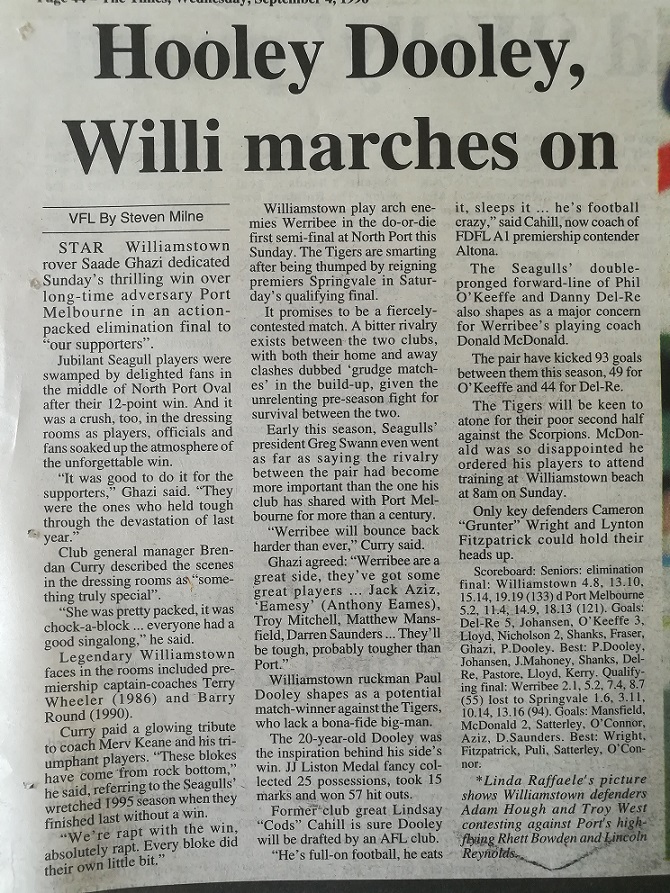 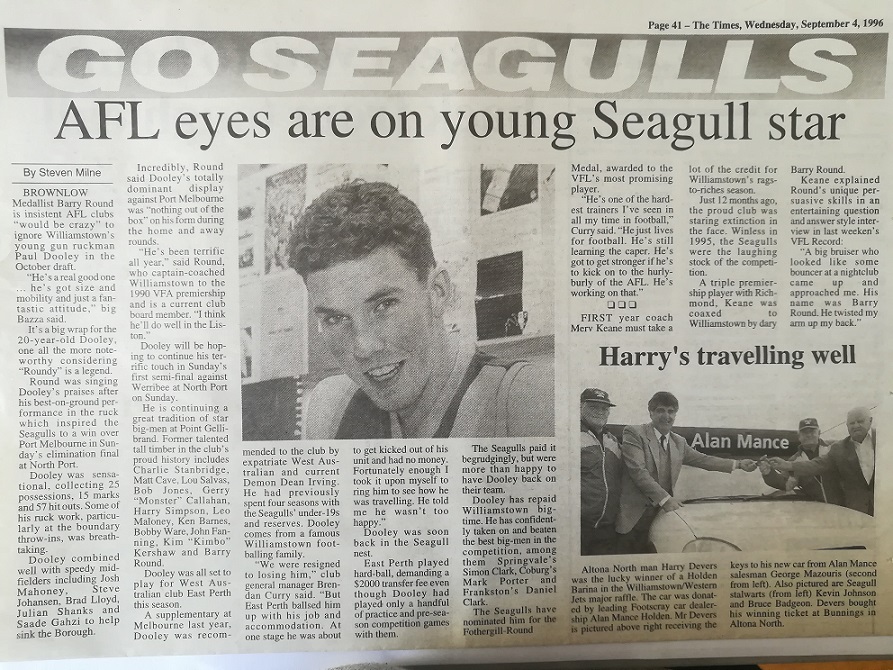 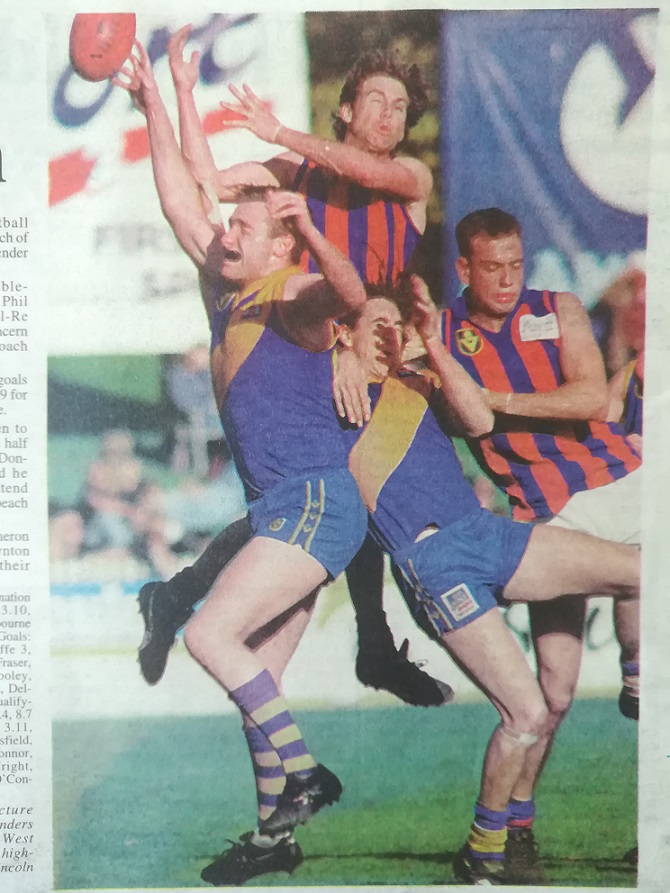 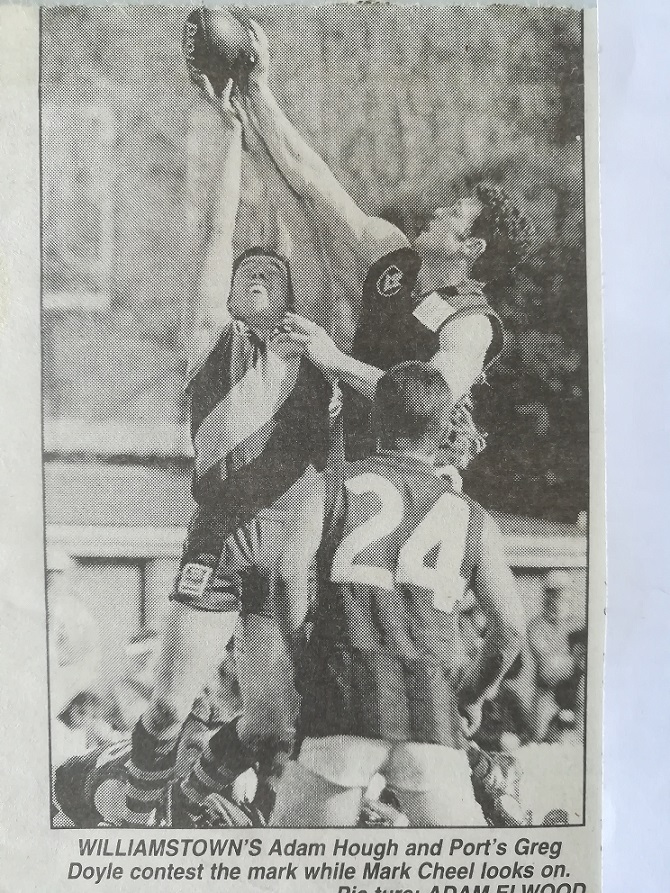 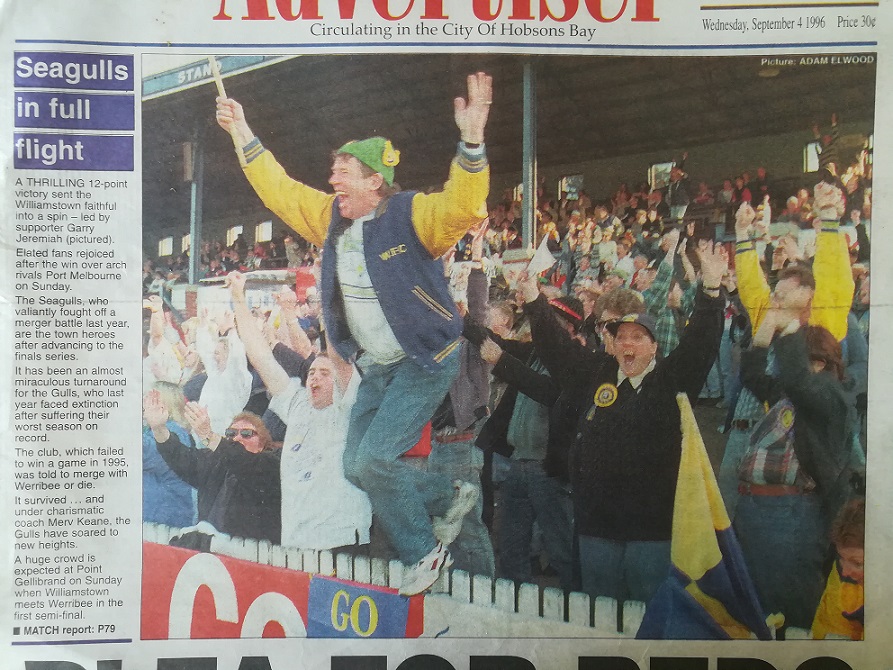 Williamstown supporters are ecstatic at the final siren in the elimination final with the Seagulls victorious by two goals over Port Melbourne. Garry Jeremiah is pictured leaping the boundary fence. 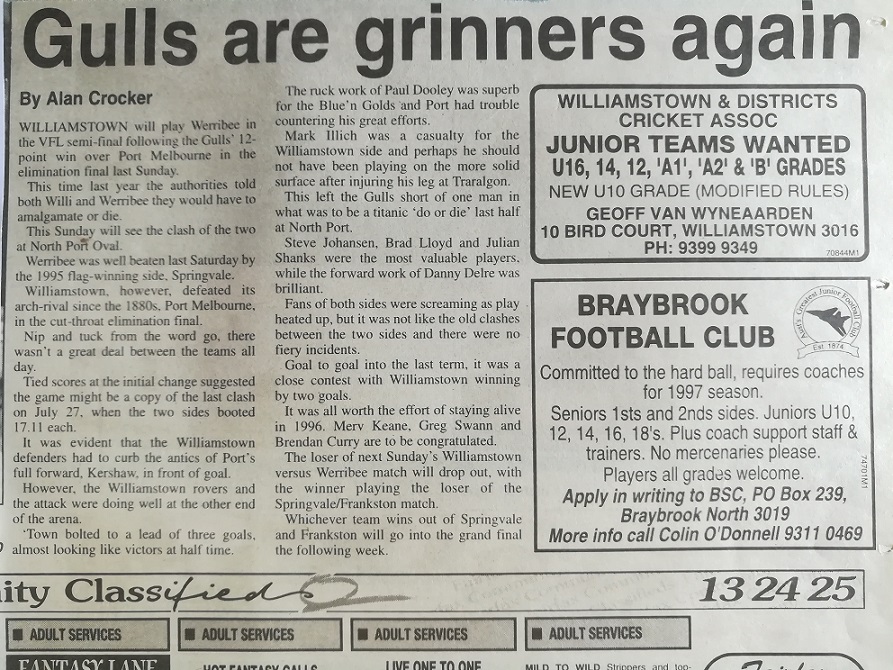