Two new clubs joined the VFA second division in 1983, which increased the size of that grade to twelve teams. These clubs, Moorabbin and Berwick, were the last to join the competition until it was rebadged in 1996 as the Victorian Football League, when another new club was admitted. Moorabbin was a merger between McKinnon and Bentleigh Football Clubs, and was not connected to the Moorabbin Club that played in the VFA from 1951 until 1963. Berwick was a successful club playing in the South West Gippsland League. As the automatic promotion/relegation system had been abandoned in 1981, there was no movement of clubs between the two divisions for 1983. However, in July 1983, the VFA reversed this decision and elected to revert to promotion of the second division premier and relegation of the first division wooden-spooner at the end of the season. The size of the VFA in 1983 at 24 teams was the largest-ever in VFA history.

By the start of the 1983 season the Seagulls had added to the playing list 108-game Melbourne player Tony Dullard, whose father Adrian had coached and played 82 games with 'Town from 1950-53, Glenn Murphy from South Melbourne Seconds, Greg Towns, formerly of Carlton and Footscray, Leigh McConnon who had played with Fitzroy and Carlton, and ruckman, Kim Kershaw, after stints at Hawthorn, Richmond and South Melbourne Seconds. Ian Fairley transferred to North Melbourne early in the season. A 97-point win at Williamstown against Werribee in the opening round (Mark Fotheringham 11 goals) signalled the Seagulls return to first division football and third spot on the ladder. A close two-point loss at Frankston and a 15-point defeat at Geelong West was followed by a twelve-goal drubbing at Coburg, despite Fotheringham booting eight majors. An 82-point win at Camberwell in round 5 (Fotheringham 13 goals) gave hope for a rise up the ladder. However, two further losses to Preston at Williamstown by 7 goals and Dandenong away by 16 points convinced President Merv Hobbs that Rod Oborne was not the right man to take the Club forward and promptly sacked him. Cousin, Graham Oborne, the Club treasurer at the time, resigned and did not return to the Club until mid-1984. Hobbs opted to hand over the presidency to Tony Hannebery and returned to coaching the team for the rest of the season while the Club looked for a new captain-coach. A 90-point win at Waverley against the eventual wooden-spooner in round 9 (Fotheringham 8 goals) and a narrow 5-point loss to ladder-leader Port Melbourne the following week gave false hope, as seven consecutive defeats were to follow, three by more than ten goals, before victory in the final home-and-away game at home against Dandenong by 28 points (Fotheringham 8 goals).

The Club's upheaval over the removal of Oborne did not sit well with the players and the Seagulls won only four games for the season, one less than the year before, and once again finishing in 11th position. Relegation was never a threat because Waverley lost all 18 games, the first club to do so in first division since the partition of the competition in 1961. Despite the team's poor season, Fotheringham kicked 108 goals to head the VFA list and also receive the Bert Hodge Memorial goalkicking award for the Club. First-year ruckman Kim Kershaw won the first of four consecutive Andy Taylor Memorial best and fairest awards, from fellow recruits Tony Dullard and Glenn Murphy. Kevin Sait ran equal third in the JJ Liston Trophy voting. Laurie Taylor won the most consistent player trophy and the most unselfish award, while Phil Bottams was voted most improved player. Fotheringham and Dullard also represented the VFA in a game against the VAFA on May 22 at Sandringham, which the Amateurs won by 11 points, 18.16.124 to 16.17.113.

Paul Eudey won his second Reserves best and fairest award, with Gary Brook and Chris Sandells equal second and Steve Bratby in third place. Eudey's previous win was in 1980. Phil McTaggart was captain-coach of the Seconds and assistant to the senior coach for the fifth consecutive season. Ray Arandez took out the Thirds best and fairest award from Don Doria, with Ashley Teagle and Paul Stewart tied for third placing. Stephen Cooke was the leading goalkicker in the under 18's, mainly due to the 46 majors he kicked against Geelong West at Williamstown in round 14 (see story below). Michael Johnstone won the best clubman award for the under 18's. Dave Hughes coached the Thirds for the fourth successive year.

One of the brightest aspects of the season for Williamstown was the attendance of 157-game Footscray veteran Terry Wheeler at the Club's last home game of the year against Dandenong, which resulted in a 5-goal victory for the Seagulls. Merv Hobbs was anxious to obtain his services as coach and president Tony Hannebery, who had the business backing of the Williamstown community, took the next step in convincing him to take the job and he was signed before the year was out, together with former teammate at the Bulldogs, Colin Dell, as assistant coach, captain-coach of the Seconds as well as coach of the Thirds. So well did Wheeler perform over the next five years that he returned to Footscray in 1989 to coach the Seconds and then became Senior coach in 1990 after the fallout from the AFL-proposed merger with Fitzroy.

The Thirds competition was reduced in age from under 19's to under 18's in this season as a trial, with catastrophic results for some clubs, most notably Geelong West, which had to travel the furthest of any team for away games and struggled to field sides on occasions. In July, Williamstown's Third grade team kicked the amazing score of 110.27.687 against the Roosters, which had only 12 players start the game and ended up with eight on the field after four were injured in the first half. Full-forward Stephen Cooke kicked a remarkable 46.8 for the day. It remains the highest score ever recorded in a game of Australian rules football, in any league and at any grade. Coburg had kicked 88.23.551 against the hapless Roosters the previous week, and after these two losses the Geelong West Thirds were withdrawn from the competition for the rest of the season.

Another highlight of the 1983 season was the opening of The Bay View Room (many years later re-named The Barry Round Room) in May of that year. It was located in the back left corner of the W.L. Floyd Pavilion, and remained in use for almost 30 years.

In this season, Terry Maloney was manager of both the Firsts and Seconds while Ron Black managed the Thirds.

Five-time premiership player (1954/55/56/58/59), John Ramsay, passed away on 13 November, aged just 53. Norm Goss senior, the Port Melbourne identity and VFA administrator, also passed away during the year and the Association decided that the Norm Goss Medal would be awarded each year to the player voted as best-on-ground in the first division Grand Final in his honour. Also, Port Melbourne in this season qualified for its 11th consecutive finals series, surpassing the record of Williamstown which made the finals every season from 1953-1962. 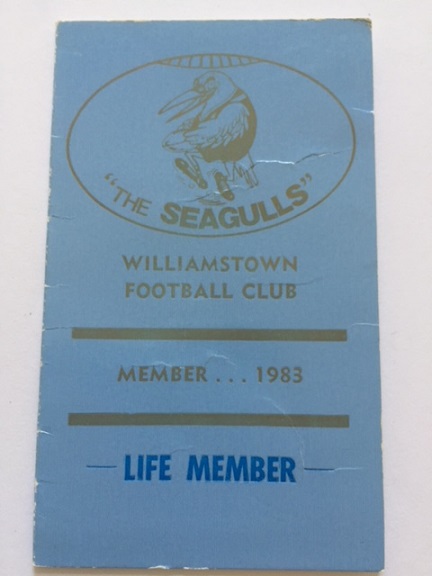 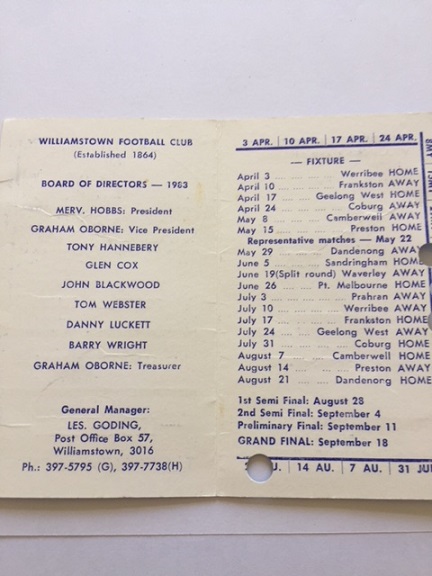 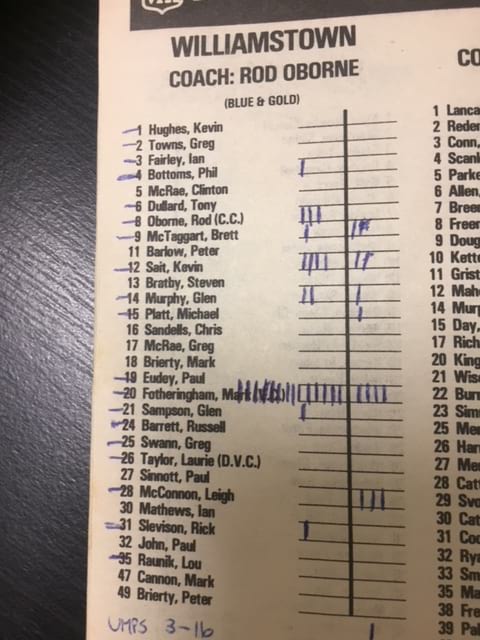 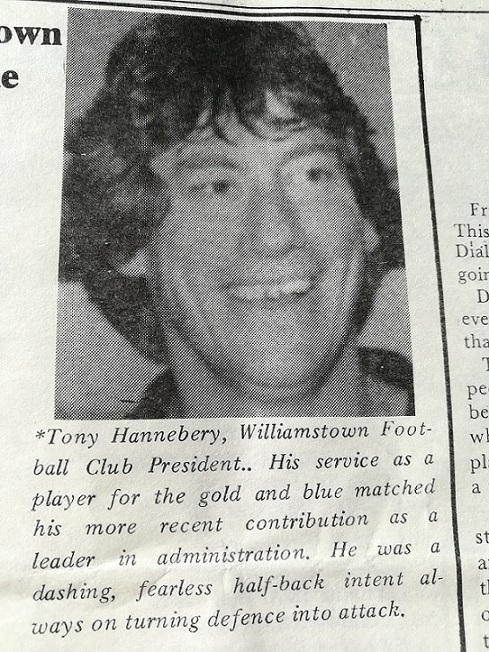 Rod Oborne and coached the seniors for the remainder of the season. 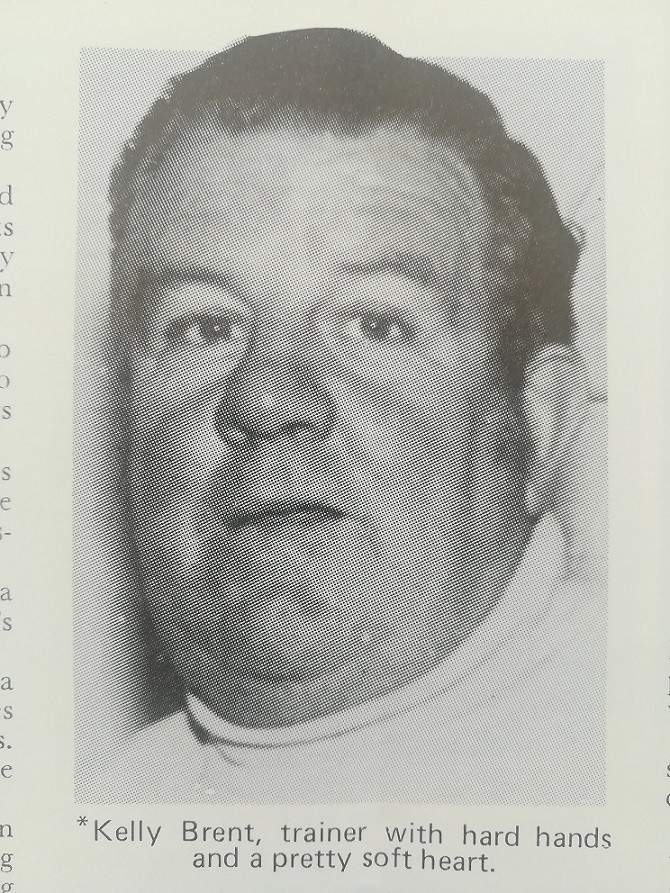 Club legend Kelvin John 'Kelly' Brent, started out as a trainer in 1959 after being impressed with the 1958 premiership win by the WFC Thirds. He was helping out with the Seconds when they won the 1966 flag under Jocka Mellis' leadership and then became head trainer in 1968, taking over from Bob 'Doc' Major who had been head trainer since 1952. Kelly held the post until the end of the 2001 season when he retired, and sadly passed away in February 2010. His brother-in-law was Daryl 'Dasher' Ward who started with Williamstown seniors at the age of 17, played 188 games and was captain for five years (1962-66) under Gerry Callahan's coaching. 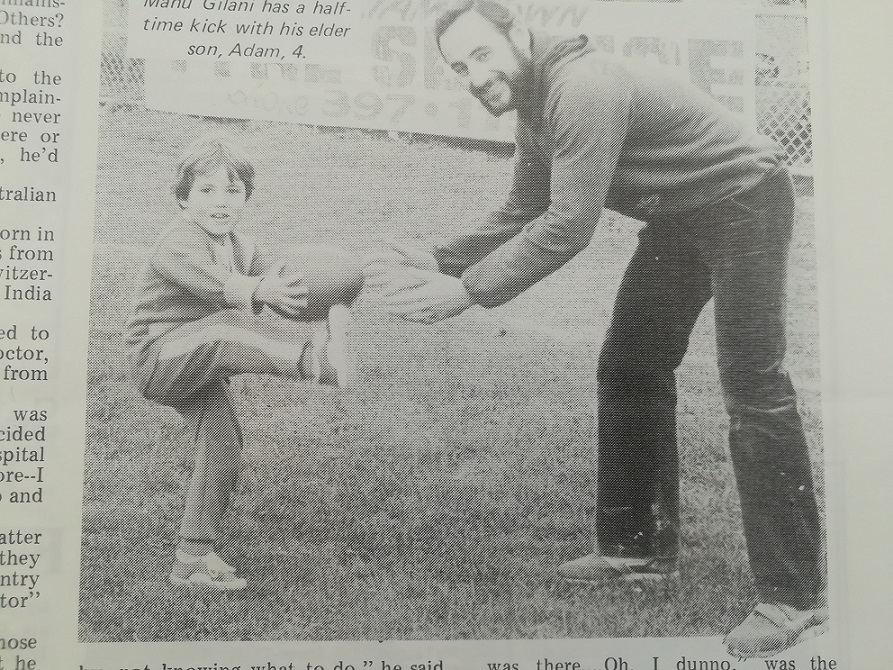 Dr Manu Gilani was appointed the Club's medical officer in 1983, a position he would hold for the next 11 seasons until the end of 1993 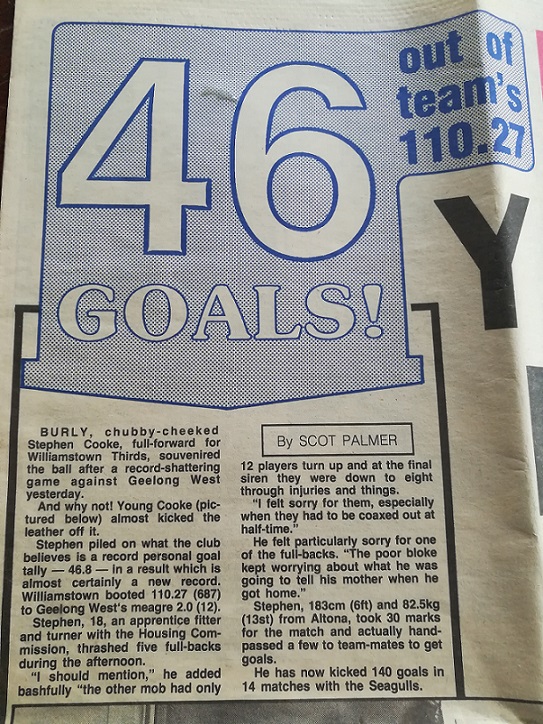 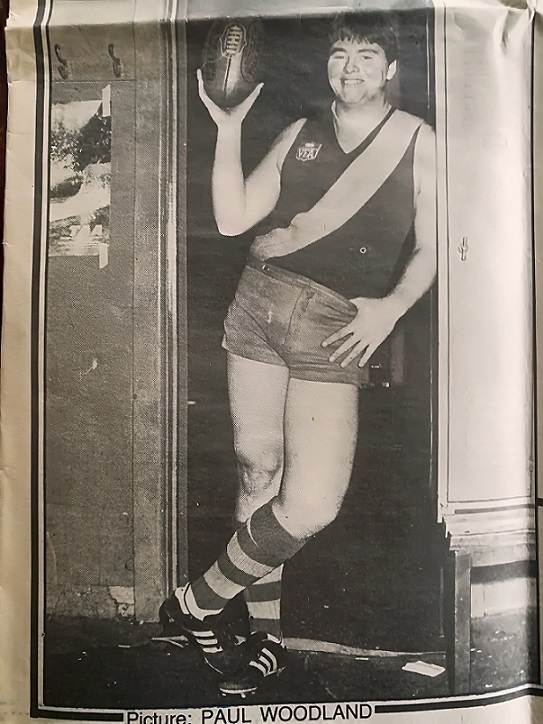 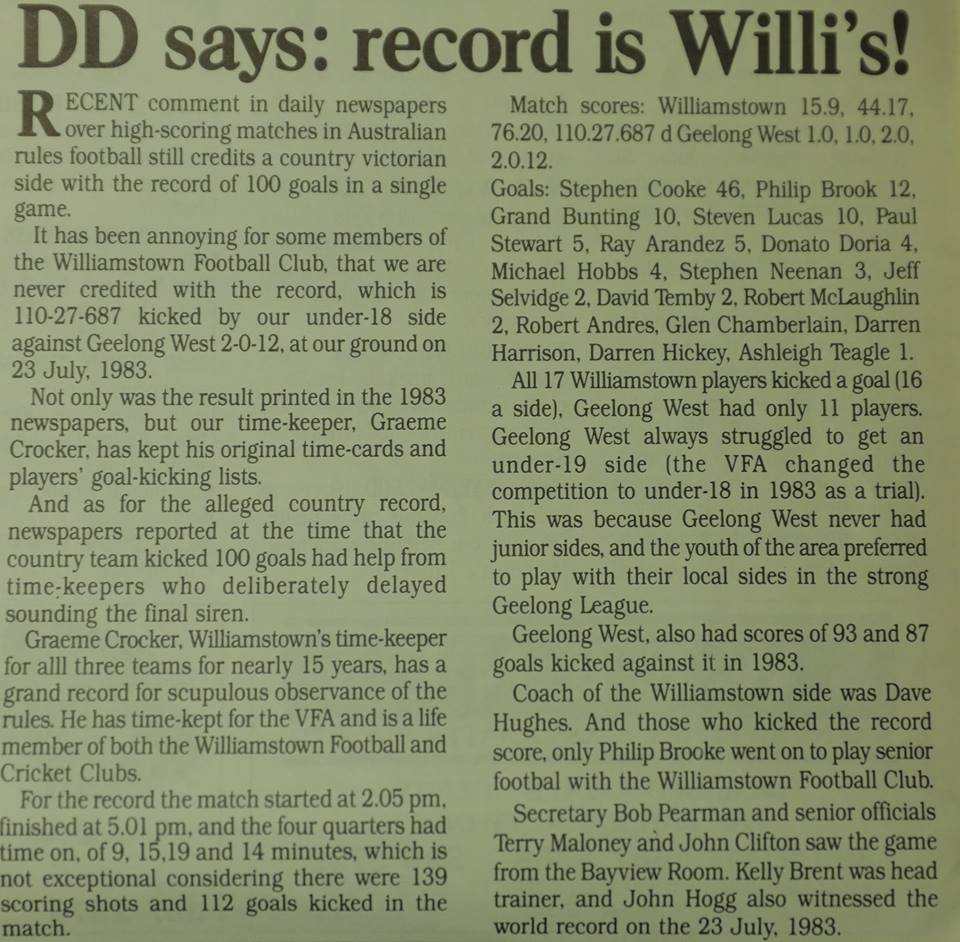 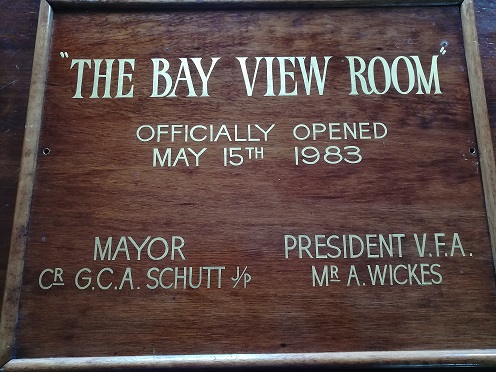 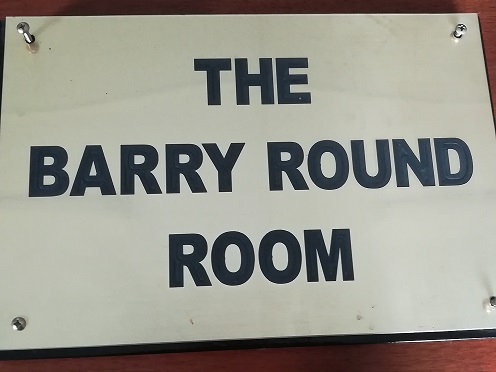 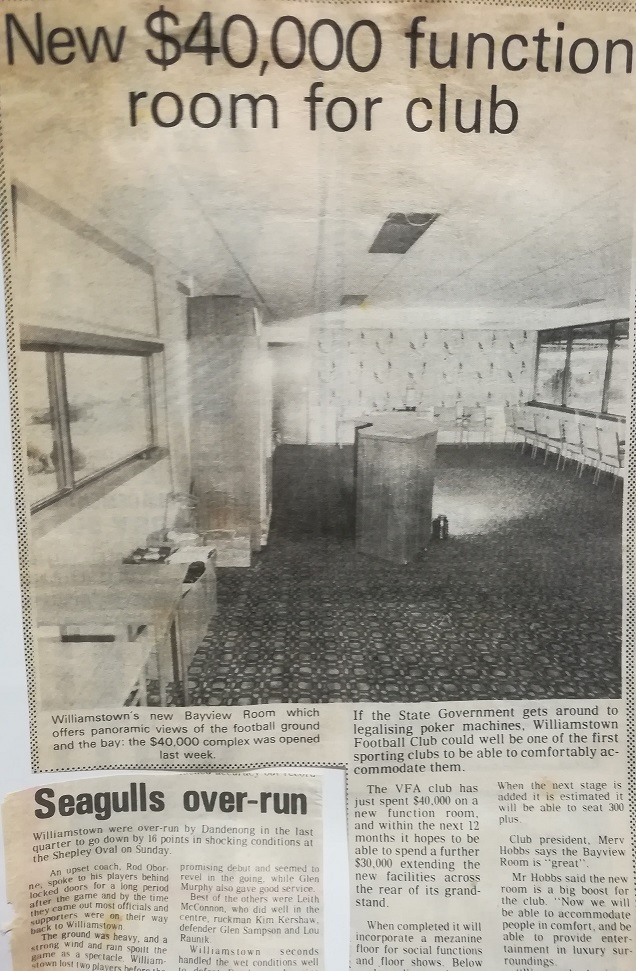 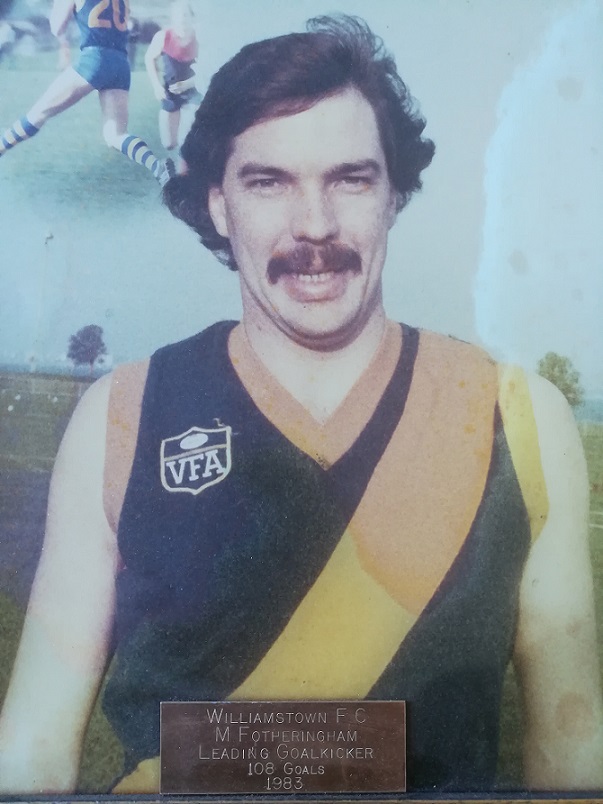 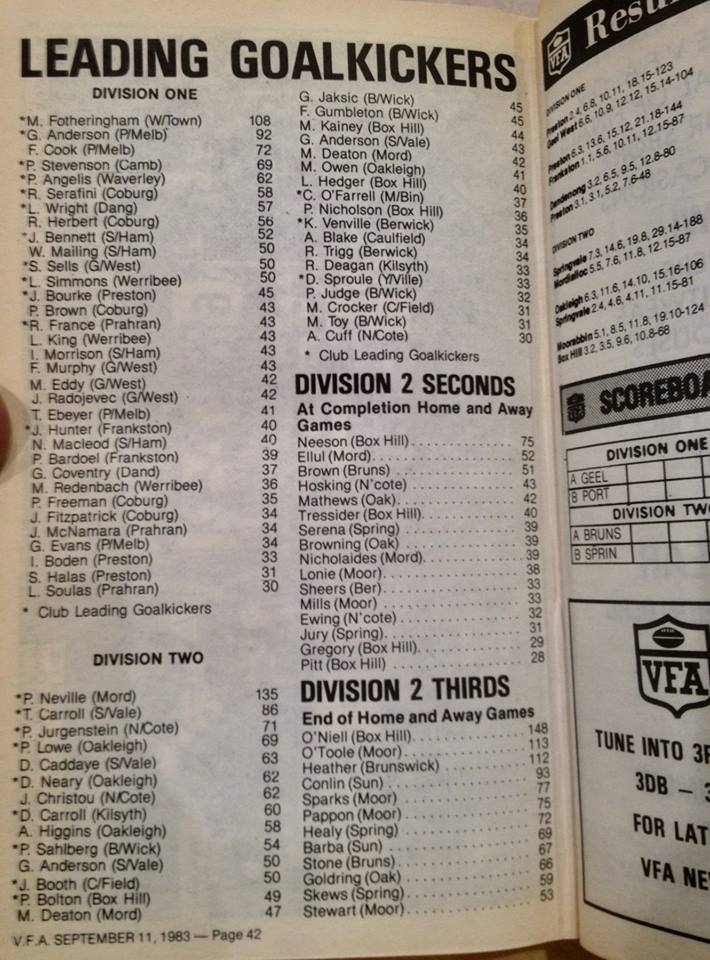 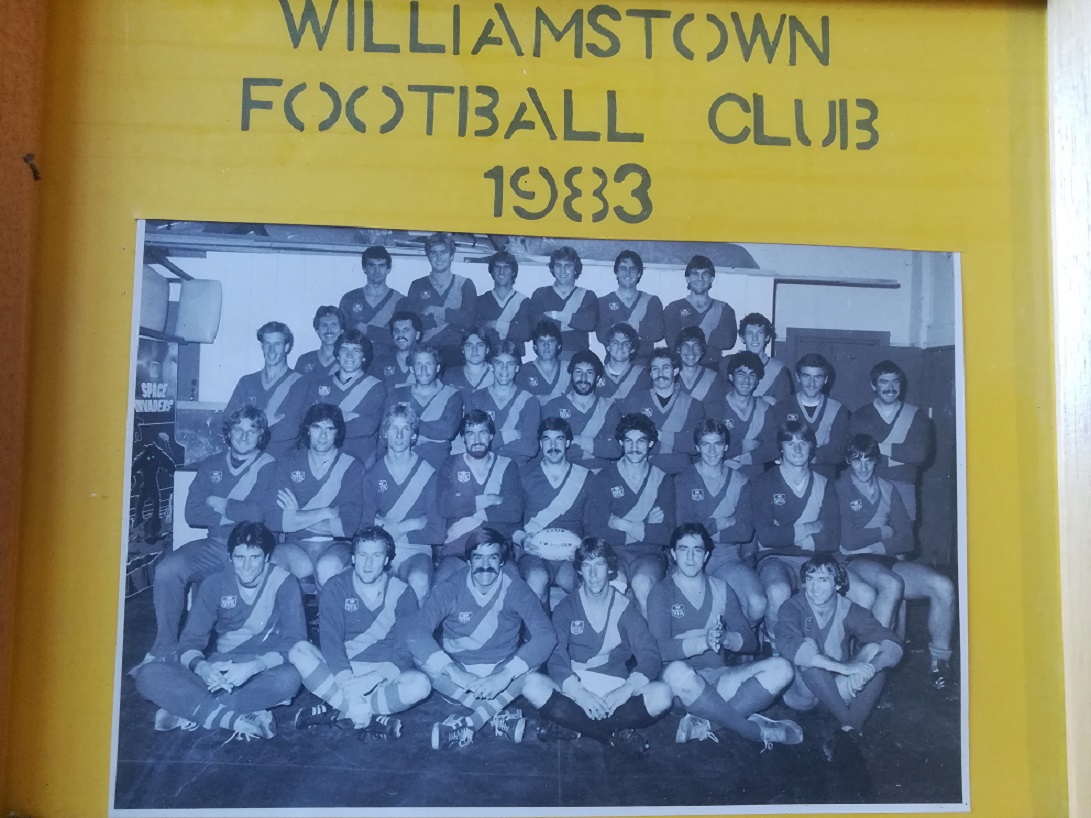 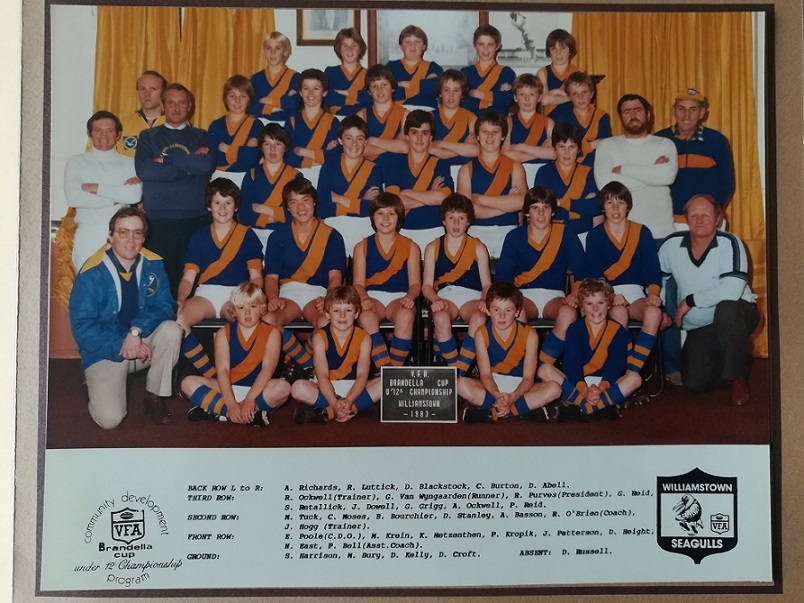 Three of the team went on to play senior football for Williamstown in the ensuing years - Joe Patterson, Dale Height and Matthew Bury. 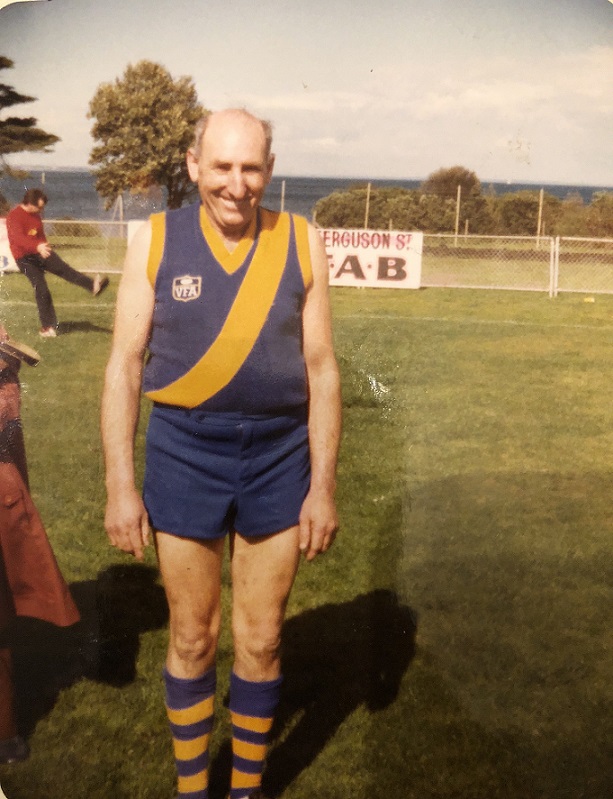 In the last home-and-away game of the season against Dandenong, Seconds captain-coach Phil McTaggart played legendary trainer John Hogg. He spent most of the game on the bench but was given a run at full-forward in the final 10 minutes of the match but failed to trouble the statisticians. 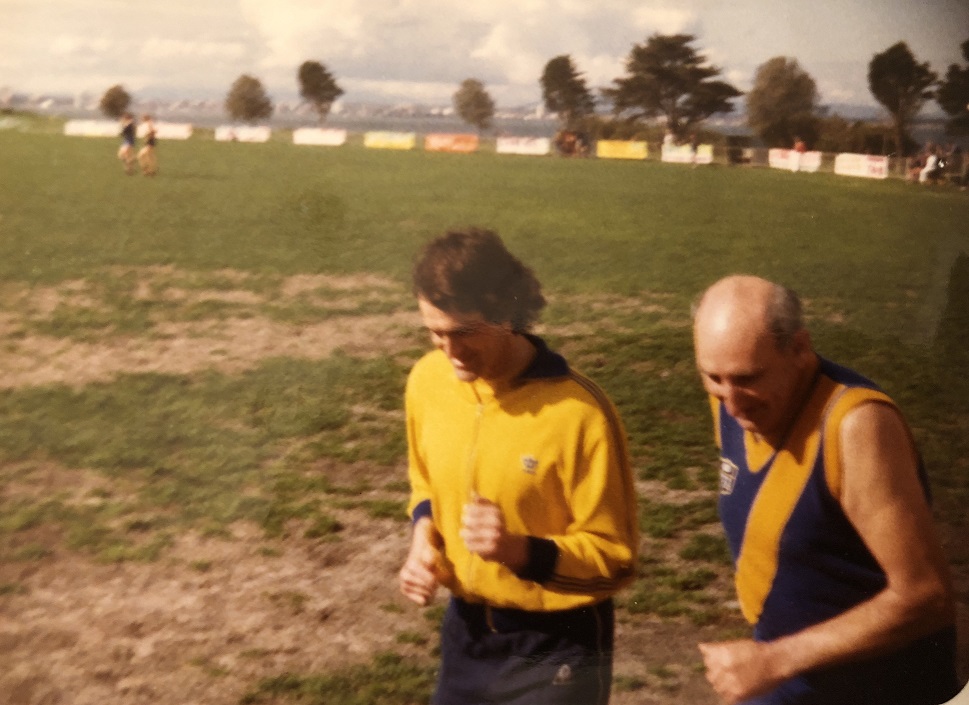 Hoggie warming up on the boundary before going on the field, with runner, former senior player Richard Luke 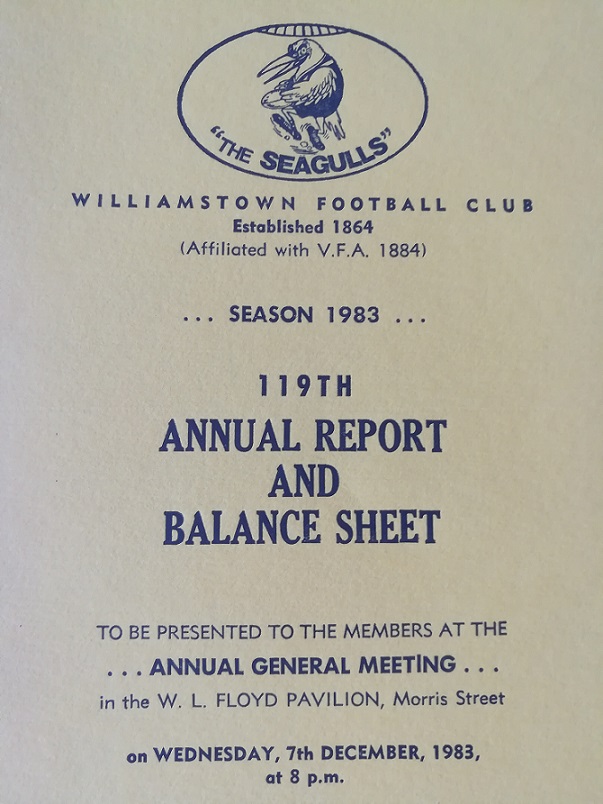 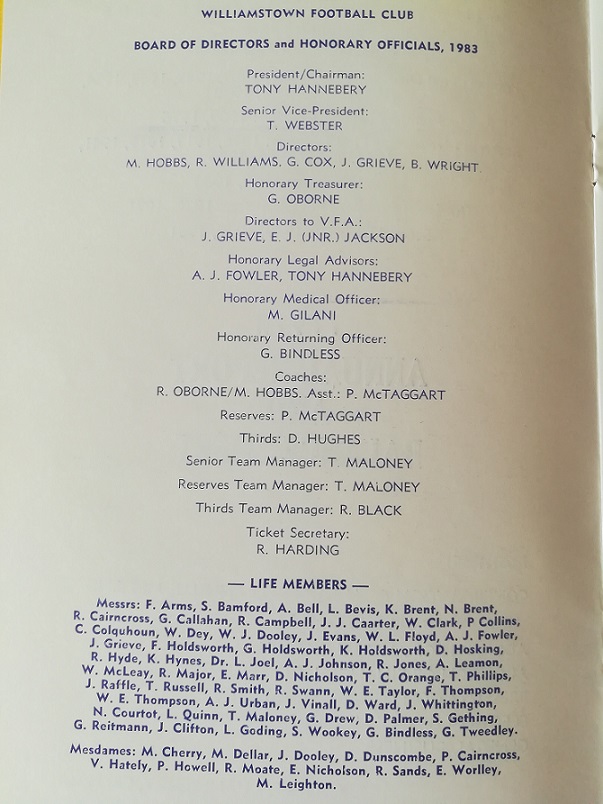 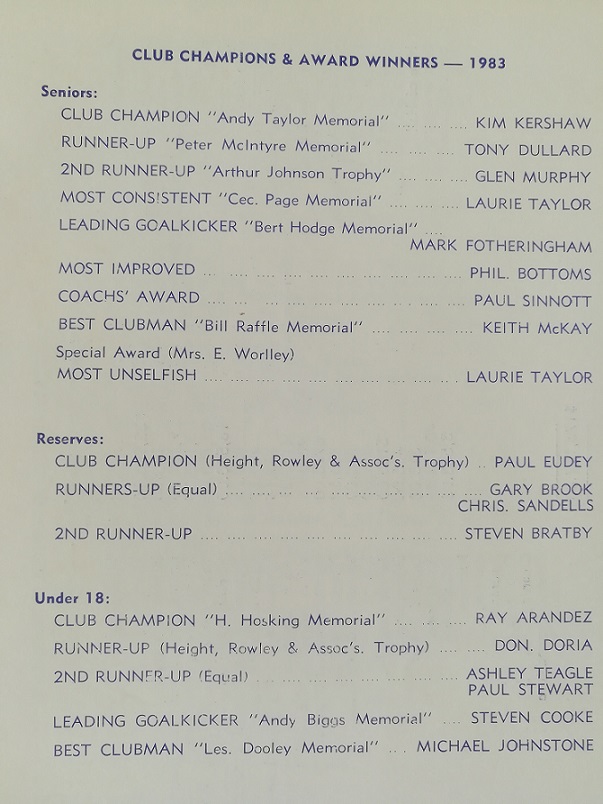