Despite the structural changes brought in by the VFA in 1981, the Channel 10 network did not renew its agreement to televise Association games in 1982. The network had shown live telecasts of VFA games over fifteen years from 1967 until 1981, but opted not to continue. One sticking point in the negotiations surrounded the use of a central ground with Ten keen for the televised game to be played at the same venue each week. The Association arranged for the Junction Oval to be available but Ten worried that the smaller crowds would give a poor atmosphere in such a large venue. Some clubs, including Prahran and Dandenong, struggled to find strong sponsorship after the television deal ended.

Two field umpires were used in all matches across both the home-and-away season and finals in Division 2 starting from this season. This change had been made in Division 1 in 1981. To coincide with the change in umpires, the voting system for the J. J. Liston Trophy and the J. Field Medal were both changed in 1982. Under the new system, the two field umpires conferred after the game, and awarded one set of votes to the best three players on the ground on a 3–2–1 basis.

The Club had three Presidents during the 1982 calendar year, as Jeff Bird stepped in to replace Junior Jackson who resigned due to ill-health mid-season. As the financial difficulties referred to below beset the Club at season's end, the coach from 1979-81, Merv Hobbs, then took over the role. Les Goding and Graham Oborne were appointed secretary and treasurer, respectively. New captain-coach Rod Oborne, cousin of Club vice-president, Graham Oborne, was joined at Williamstown by Mark Fotheringham, the Yarraville full-forward who had kicked 357 goals in 73 games since 1978, along with former Eagles teammate and 1980 Field Medallist, Kevin 'Shark' Sait, who had spent 1981 with Footscray, future captain, Liston Medallist  and premiership player, Brett McTaggart, Alun Owen and future president Greg Swann, who joined from South Melbourne. While success in first division was desired, it was not as important as in previous years because the VFA had decided, amongst the various other changes instigated in 1981, to dispense with the automatic promotion/relegation system to give the four clubs that had been promoted the chance to settle.

The first win for the Seagulls back in the major division came in round 2 with a victory over Frankston at Pt Gellibrand by 39 points (Fotheringham 7 goals, Sait 4), then three consecutive defeats were experienced before a win again at Williamstown against Dandenong by 70 points (Fotheringham 7 goals, Oborne 6, Fairley 5). One of the defeats was to Geelong West by 5 points after the 'Town was 10 goals up at one point during the match. Another four successive losses from rounds 9-12 left the Seagulls second last on the ladder, five games out of the four. With finals looking a distant prospect, a victory in round 13 was then followed by another run of four defeats before downing Prahran at Williamstown in the last game of the home-and-away round by 50 points (Fotheringham, Oborne and Michael Kelly 5 goals each).  This meant Williamstown won five of the 18 games to run 11th or second last, with only Waverley below them on the ladder. The percentage of 86.3 indicated a fair degree of competitiveness and the basic aim of the Club, to consolidate its place in First Division, had been achieved.

Fotheringham, who kicked 98 goals to finish second on the VFA list behind Fred Cook, showed that he could score just as freely in First Division as he had in the lower grade, with big bags of nine goals against Sandringham in round 8, eight against Camberwell in round 12 and also Geelong West in round 15 and Coburg in round 16, seven against Werribee in round 14 and also the games mentioned above. A deadly kick for goal, he was destined to have a big impact on Williamstown's fortunes in the next few years. Oborne also kicked a swag of goals from the half-forward flank, his 60 earning him ninth position on the VFA list. Fotheringham's efforts were crowned by winning the Club's Andy Taylor Memorial best and fairest award, from Ian Mathews and fellow first-year player Kevin Sait, as well as the Bert Hodge Memorial Trophy for leading goalkicker. Bob Pearman was awarded the Bill 'Darkie' Raffle Memorial Trophy for best clubman.

The Reserves best and fairest was awarded to Jeff Ind, with Neil Coates runner-up and Duane Doyle in third place.

The under 19's, again coached by Dave Hughes, reached the grand final in that grade for the second year in succession but went down to Preston by four goals, which won their last fourty-one games in a row by taking the flag. John Crombie booted 151 goals for the Thirds, a Club record in that grade, including 24 majors against Dandenong in round 17, but it was only enough to make him the runner-up to Mark Cannon in the best and fairest in that grade. Robert Wiederstein finished in third place. Crombie also took out the VFA goalkicking award for the Thirds.

During the season, Greg Tweedly played his 100th senior game for the Club in round 10 at Preston, while Laurie Taylor made his 75th senior appearance in round 16 against Coburg.

After the season president Merv Hobbs was approached by the players, who wanted payment for their services and were threatening a mass walk-out. The Club was about $90,000 in the 'red', but In the space of about six weeks Hobbs raised $40,000 to liquidate the debt to the playing group. Tony Hannebery, later to become Williamstown president and then the last VFA president, said the Club would not have survived without the input of Hobbs. The mercurial nature of Hobbs certainly gave 'Town the spark it needed to again become a VFA force.

Stan Whear, life member and the longest-serving secretary of the Club (1952-64), passed away during the year. 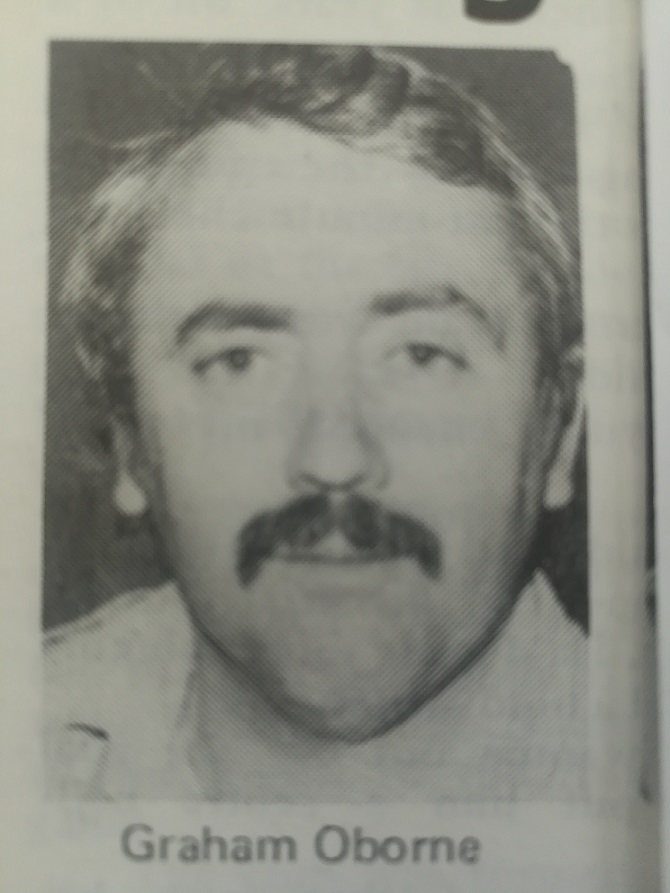 Graham Oborne became senior vice-president & treasurer in 1982 and assisted in luring his cousin, Rod Oborne, to the Club as captain-coach. 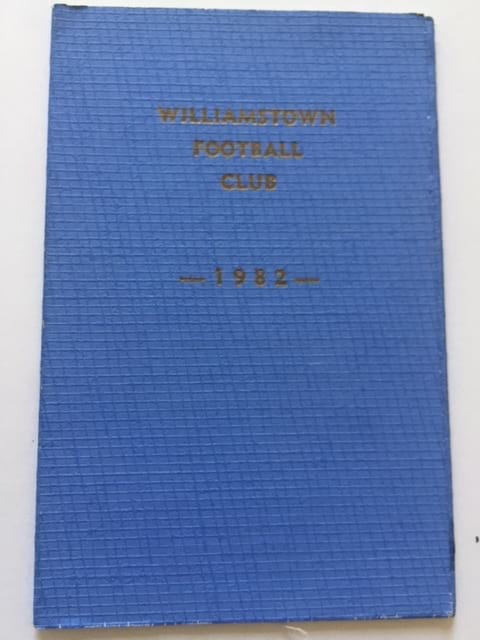 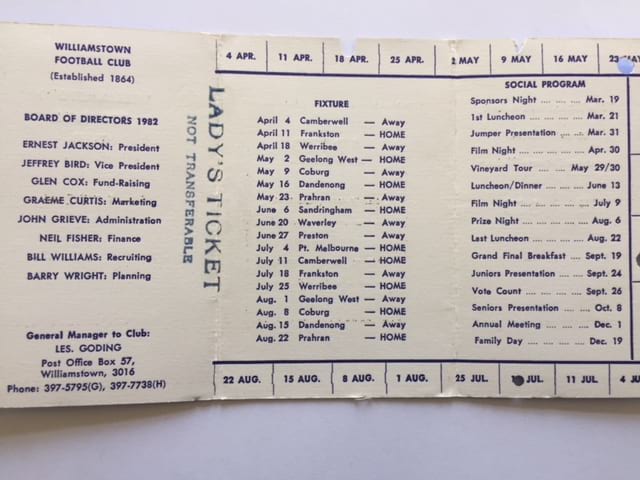 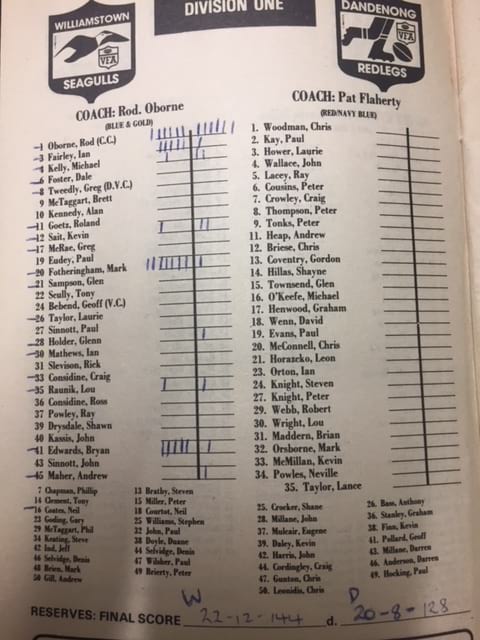 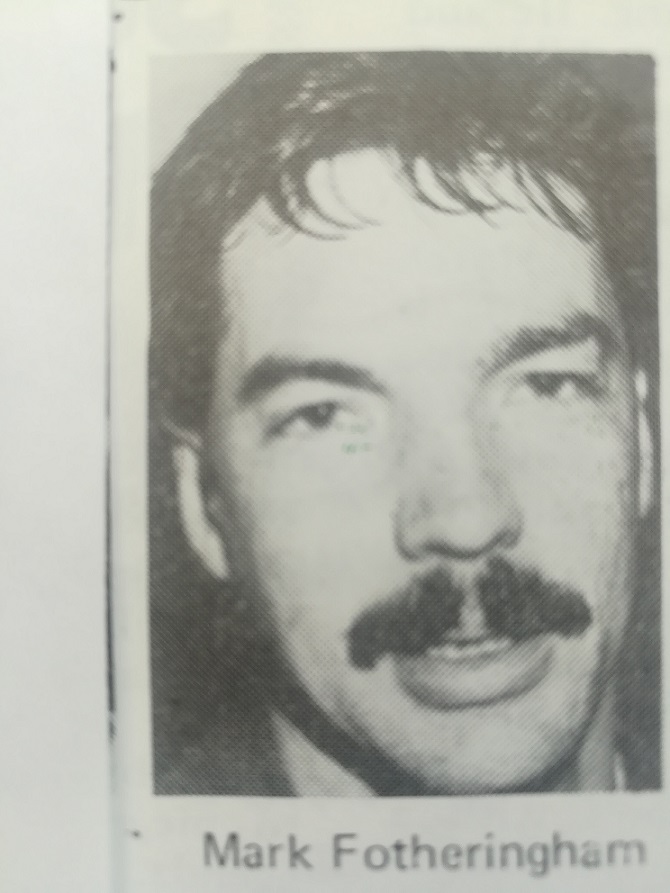 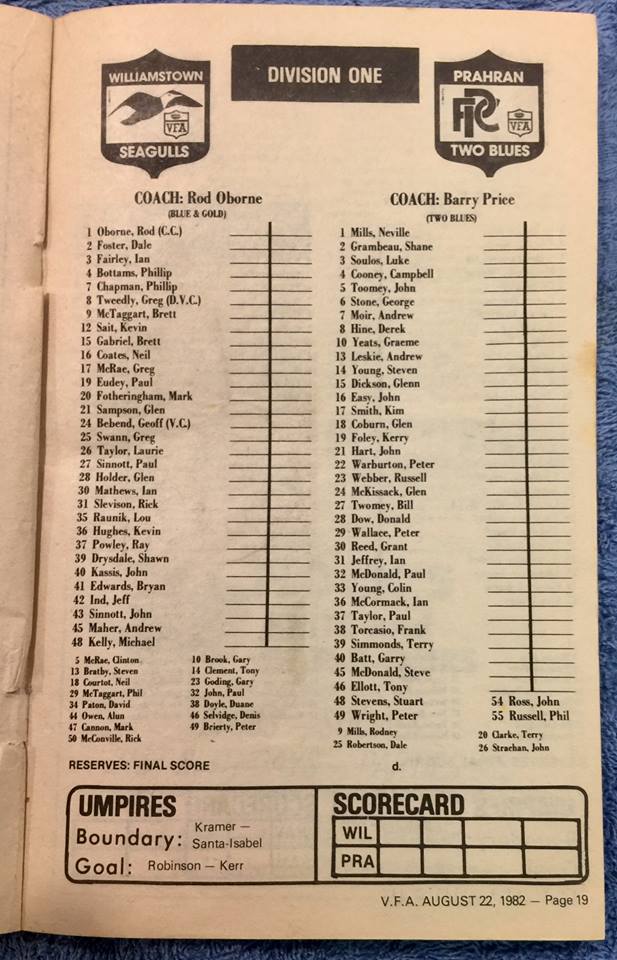 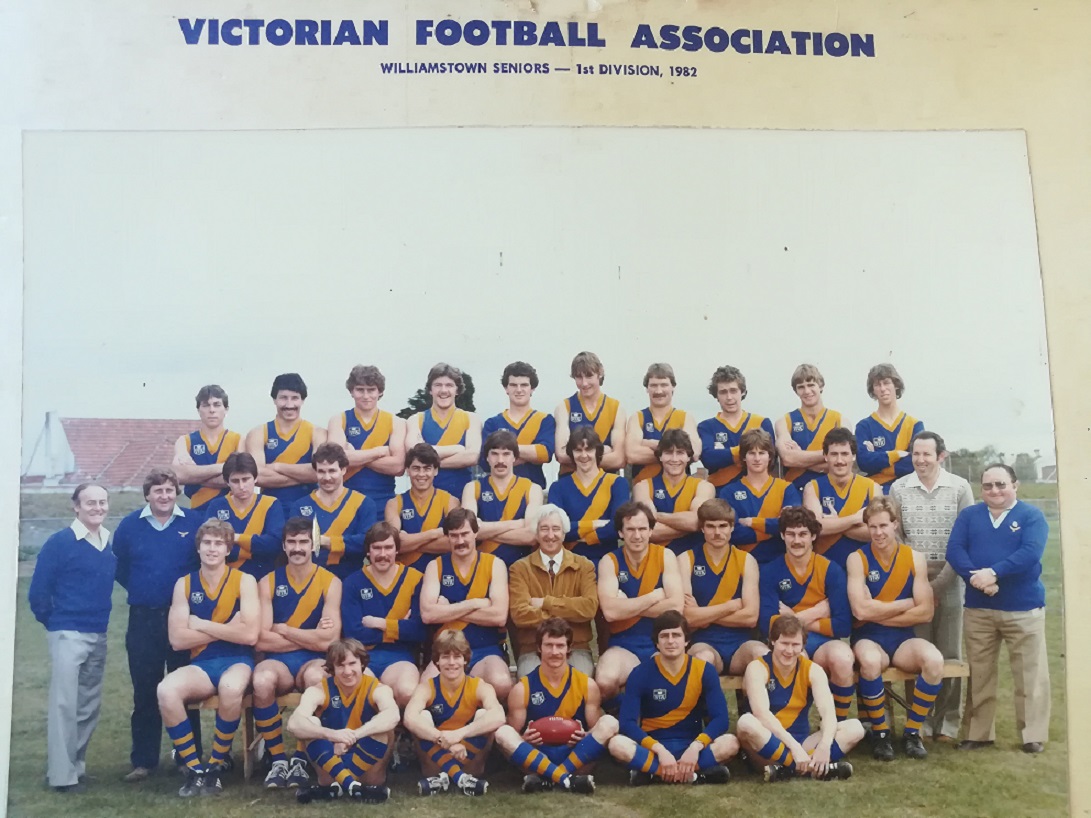 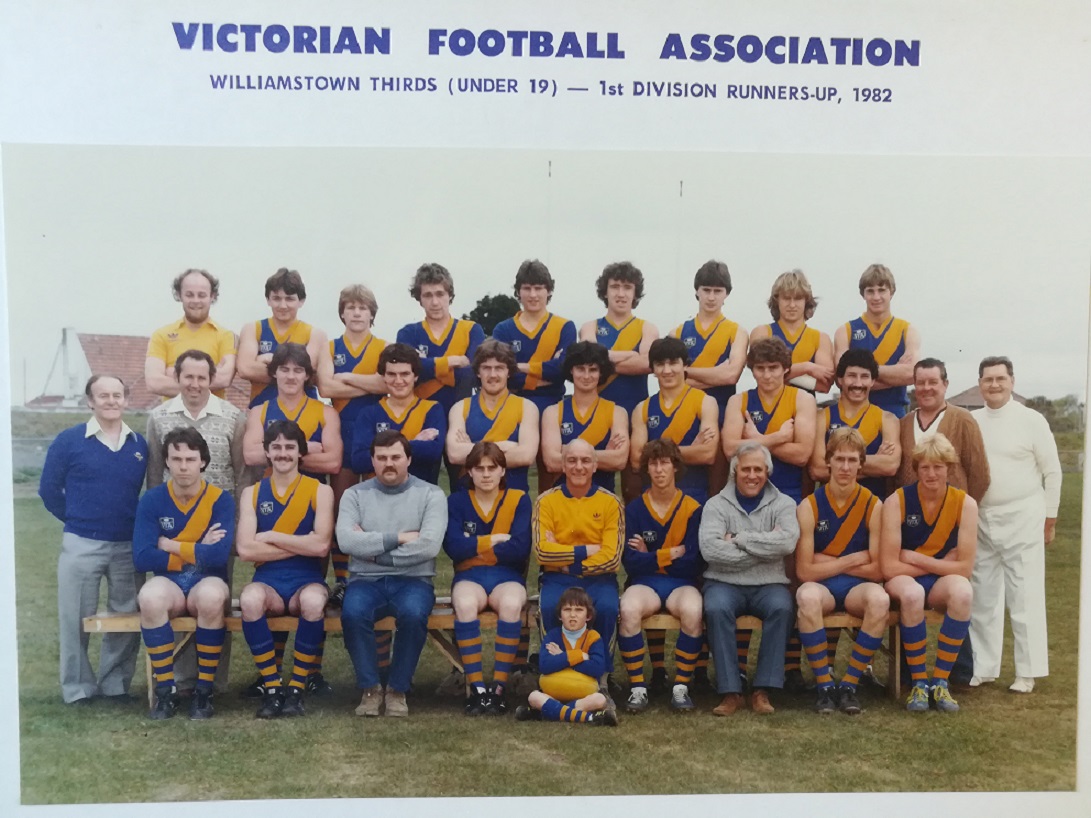 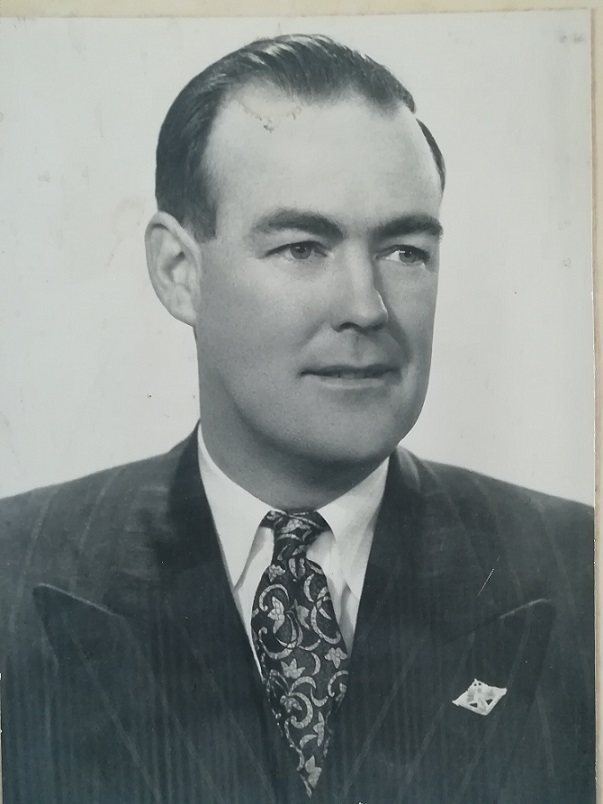 Stan Whear, life member and the longest-serving secretary of the Club (1952-64), passed away during the year 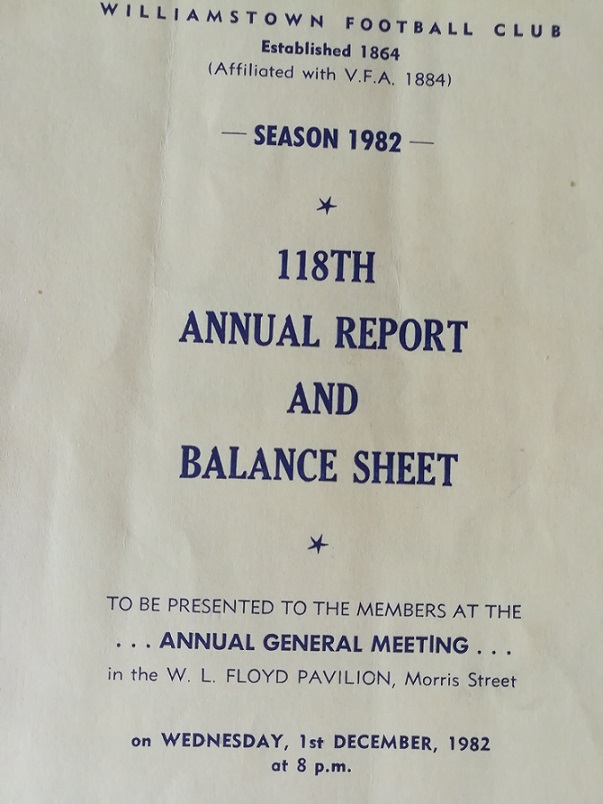 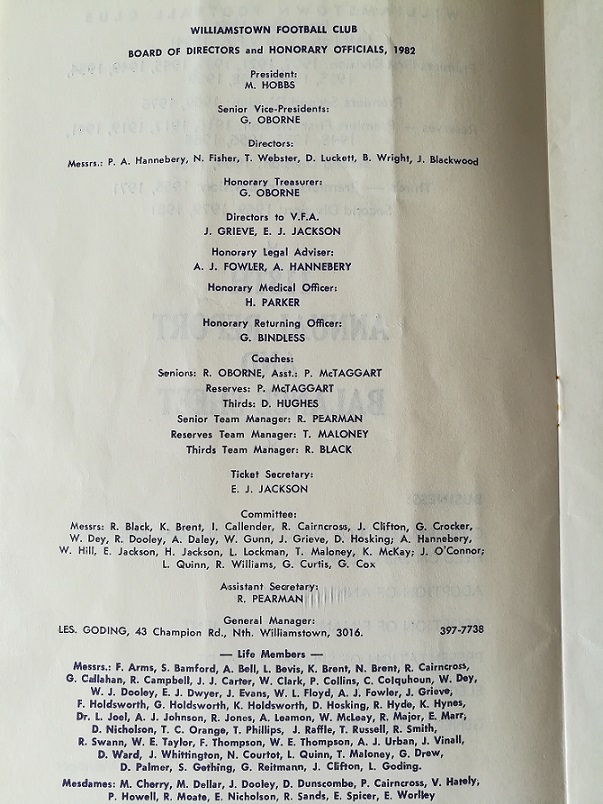 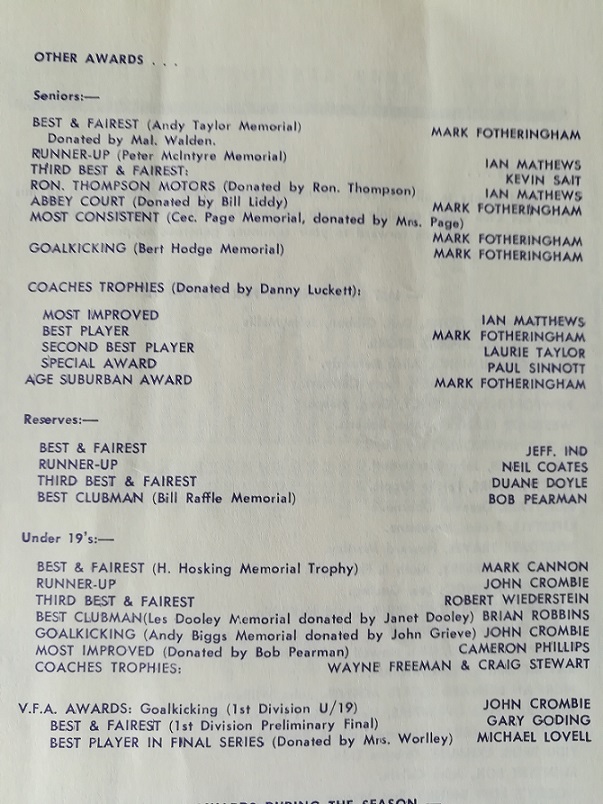