After trialling it during the 1980 finals series, two field umpires were used during all Division 1 matches in 1981. Division 2 continued to be officiated by a single field umpire during the home-and-away season, and by two field umpires during finals. One of the consequences of this was that the Liston Trophy voting procedure changed. Previously, in both the Liston Trophy and Field Medal, the field umpire and each of the two goal umpires had independently awarded votes to the best two players on the ground on a 2–1 basis. This year in Division 1, each field umpire but neither of the goal umpires awarded Liston Trophy votes on the same 2–1 basis as before; in Division 2, Field Medal voting procedures were unchanged.

Ernest 'Junior' Jackson took over the Presidency from Sid Wookey, whilst Merv Hobbs continued on as coach with Greg Tweedly the new captain. 1975 best and fairest winner, Mick Kelly, returned to the Club after 57 games and 18 goals with Footscray from 1976-80 and was made deputy vice-captain, whilst Alun Owen commenced with the seniors in this season from South Districts and went on to play 96 games and kick 21 goals, including the 1986 premiership and the 1985 grand final, up until the end of 1990. The season began promisingly with three wins and a draw in the first four rounds to sit the team in second position on the ladder. The draw was against Werribee in round 2 at Williamstown, while the round 4 clash against Box Hill, also at home, resulted in a percentage-boosting 20 goal victory, 26.26.182 to 8.12.60, with Stan Gilday kicking 7 goals. Four losses in the next five rounds had pushed the Seagulls down to seventh by the half-way mark of the season, but four consecutive wins from rounds 12-15, including a huge 164-point victory at Williamstown over Sunshine, 36.24.240 to 10.11.76 (Paul John 8 goals, Ian Fairley 6) had 'Town back in contention. This was the Club's highest-ever score to that point in time. However, three successive losses to finish off the season, including a 3 point defeat at Williamstown by eventual premier Camberwell in round 17, meant that Williamstown had slipped three rungs to seventh place after 1980, winning nine, losing eight and drawing one game. The Seagulls were three wins and considerable percentage outside the final four. While the Seagulls showed occasional good form, a finals place was never likely, particularly when, at one stage of the season, 18 senior players were out injured, including the entire goal-to-goal line.

Phil McTaggart, once again captain-coach of the Reserves and assistant to Merv Hobbs, got his team into the finals for the third year in succession. However, they went down to eventual premiers, Camberwell, in the first semi-final after having three players sent off during the game, none of which were subsequently suspended. The under 19's slipped into the final four by 0.1% and then went on to win the premiership by 9 goals, 22.4.136 to Waverley's 12.12.84, under the guidance of second-year coach Dave Hughes and captained by Larry Loton. Future senior premiership player, Rick Slevison, kicked 6 goals while the best players were Noel Shield, Chris Sandells, Larry Loton, Gary Goding, Mark Arceri and Slevison.

The Andy Taylor Memorial Award for Club senior best and fairest player went to Geoff Bebend, from Ian Fairley and Laurie Taylor. Fairley also was awarded the Bert Hodge Memorial Trophy for leading goalkicker with a total of 39 for the season, and tied for the most consistent player award with Paul Eudey.

The Reserves best and fairest was awarded to John Sinnott, from Rod Smith and captain-coach Phil McTaggart. Phil Chapman, who had kicked over one hundred goals in the Thirds in 1978 and 1979, won the Seconds goalkicking award with a total of 62 for the year. The Thirds best and fairest was won by Gary Goding, from Tony Clement and Mark Arceri. Clement also finished third in the voting for the VFA under 19's competition best and fairest award, the F. Gomez Medal. Peter Brierty won the goalkicking in the Thirds with a total of 67. Best Clubman for the under 19's was awarded to Mark Brien.

Alan Kennedy played his 75th senior game for the Club in round 18, while Mal Taylor, Laurie Taylor and Rollo Goetz all played their 50th during the season. During the year the Club lost one of its greatest-ever supporters in Tom 'The Governor' Stewart, whilst Leo Callahan, the father of the legendary Gerry Callahan, also passed on.

For the first time since 1931, Dr Louis Joel was no longer in the role of Club medical officer. Dr Howard Parker took over the position after having shared the role with Dr Joel in 1980. Legendary trainer, John Hogg, joined the support staff in this season.

A number of people were added to the life members list at the annual meeting held in December. Terry Maloney (Seconds team manager since 1972 & social committee member) and Peg Cairncross (ladies committee member for 10 years) had the honour bestowed upon them, while Gordon Drew (Seconds secretary 1945-61), Dave Palmer (Seconds treasurer 1945-61), Syd Gething (long-time trainer of the Seconds) and Keith Reitman (Seconds president and member of Seconds 1948 premiership team) were also rewarded for many years of service to the Reserves team.

Since the late 1970's, the popularity and financial viability of the VFA had been in decline. One factor contributing to this was the promotion and relegation system which existed between the two divisions, which had been in place since 1961. It meant promotion for the Division 2 premier and relegation of the Division 1 wooden-spooner at the end of each season, but it was based purely on on-field performance and no consideration was given to the off-field strength of the club(s), which was the most critical factor in determining a club's viability. A huge gap between the strongest and weakest clubs had emerged, and the fickle correlation between off-field strength and on-field finishing positions meant that some strong clubs were stuck in Division 2 and some weak clubs were holding their places in Division 1. The conclusion was that the VFA would be more viable if the clubs which made up Division 1 were selected based on off-field merit and viability, rather than on-field results. A new structure, which was first proposed in September 1980, was ratified in May 1981 under Alan Wickes' new VFA presidency. Under the new structure to commence in 1982:

·       Division 2 could be expanded to as many as twelve clubs, with the final number depending upon the number of suitable applicants.

·    The clubs in Division 1 were selected by the VFA executive based on the following criteria, in order of importance: quality of administration; financial position; quality of facilities; long-term potential of the club; on-field performance; on-field and off- field reputation; development programs for junior players and local attitudes towards Sunday football.

·       Promotion and relegation between the divisions was decided at the end of the season at the discretion of the VFA, based on the same criteria.

·       Automatic promotion and relegation for the Division 2 premier and the Division 1 wooden spooner was abolished. This was to last for only two seasons, and was reinstated during the 1983 season.

The VFA also encouraged a number of its weaker clubs to consider amalgamating with neighbouring clubs to improve long-term viability. As many as fourteen of the Association's twenty clubs were sent letters on the matter of amalgamation during 1981. Prahran and Caulfield, Box Hill and Camberwell, and Oakleigh and Waverley were amongst the pairs of clubs known to have been approached, but no mergers resulted.

The composition of the new Division 1 was announced on 7 September 1981, the day after the Second Division Grand Final. Four Division 2 clubs were promoted to the expanded Division 1 in 1982, namely Camberwell, Waverley, Werribee and Williamstown. Despite finishing seventh and having only average performances in Division 2 since being relegated after the 1977 season, Williamstown (the longest-serving club still in the Association) was considered to be still one of the most financially stable and well supported clubs in the lower division.

The changes also helped to spread Division 1 more evenly across Melbourne: Werribee and Williamstown were the first western suburban clubs in Division 1 since 1977, and Waverley's inclusion provided more representation to the sprawling south-eastern suburbs.

Two Division 1 clubs were relegated for 1982, namely Brunswick and Caulfield. Two other clubs who were considered for relegation but held their places were Geelong West, who had recovered from a severe financial crisis in 1980-81 and Coburg, who, like Brunswick, was suffering from a low fanbase due to demographic shifts in its locality.

Two new clubs joined Division 2 for the 1982 season. These were the first new admissions to the Association since Frankston joined in 1966. The new clubs were Springvale and Kilsyth. The two new clubs brought the total size of the Association to twenty-two clubs, a new record. Division 1 was expanded to twelve clubs, and Division 2 remained constant at ten clubs.

Williamstown, much like the VFA, was drifting and living on past glories. Whether it would have been good enough over the ensuing years to have won the Second Division title and returned to First Division was not tested because of the above-mentioned structural changes. Immediately after the Second Division finals, Williamstown found itself back in First Division. This represented an enormous opportunity to revive and how well the Club grasped that chance became evident as the 1980's unfolded.

At the end of the season, due to the recommendation by incumbent coach Merv Hobbs that a playing coach was required, the Club appointed former Collingwood and Richmond player Rod Oborne to lead the team back into first division. Brendan Bailey finished up as secretary of the Club due to work commitments, as did treasurer Rob Harding. 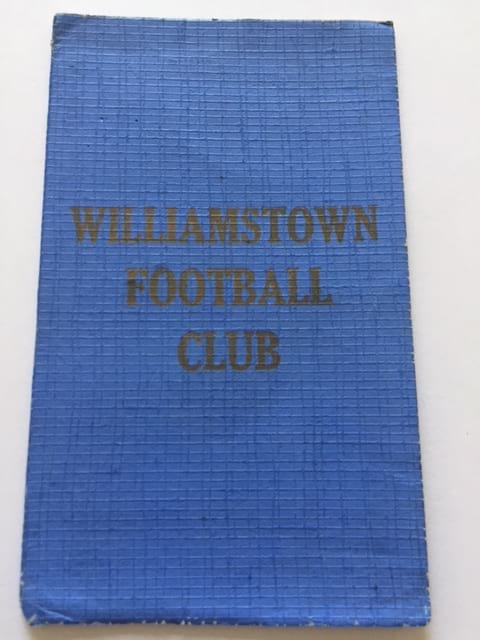 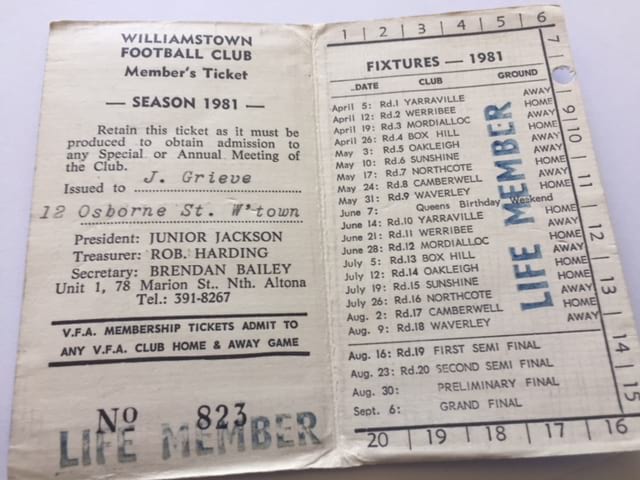 1975 best and fairest winner, Mick Kelly, returned to the Club after 57 games and 18 goals with Footscray from 1976-80 and was made deputy vice-captain. The young boy in front of him is 10 y.o. Chris Curtis, son of Club stalwart, Graeme Curtis. 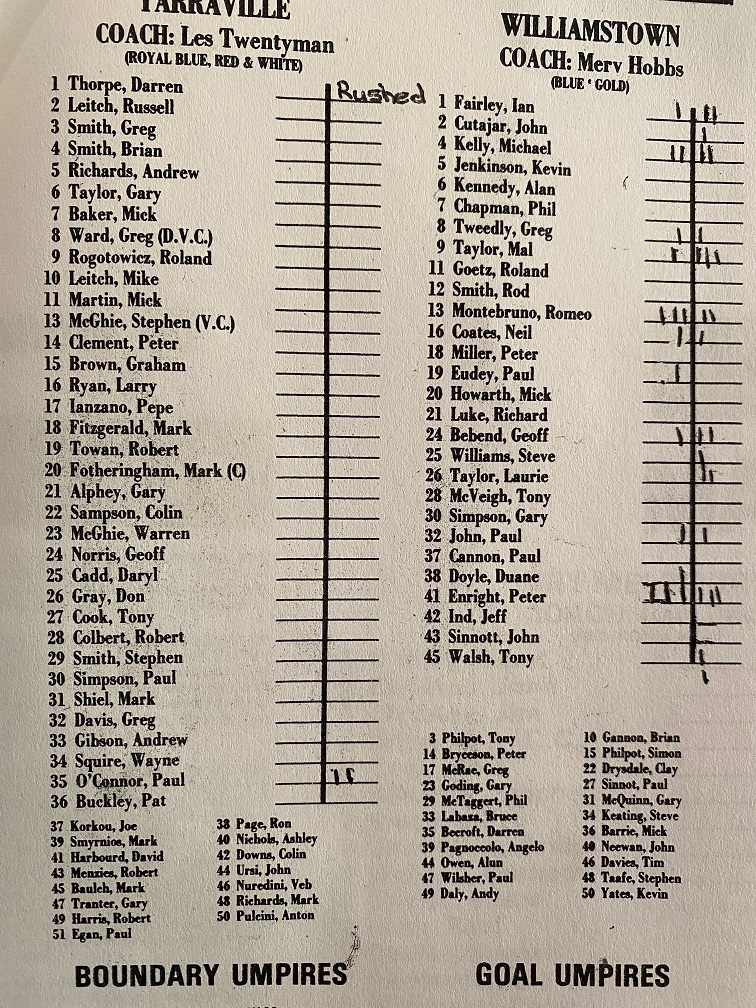 The 1981 senior playing list for the round one encounter at Yarraville, which was coached by former Williamstown Seconds and Thirds player, Les Twentyman, and captained by future Seagull century goalkicker, Mark Fotheringham. Future Williamstown player, Andrew Gibson (#33), was also on Yarraville's list as was former Seagull, Ron Page (#38), the uncle of Williamstown's Ian Fairley. 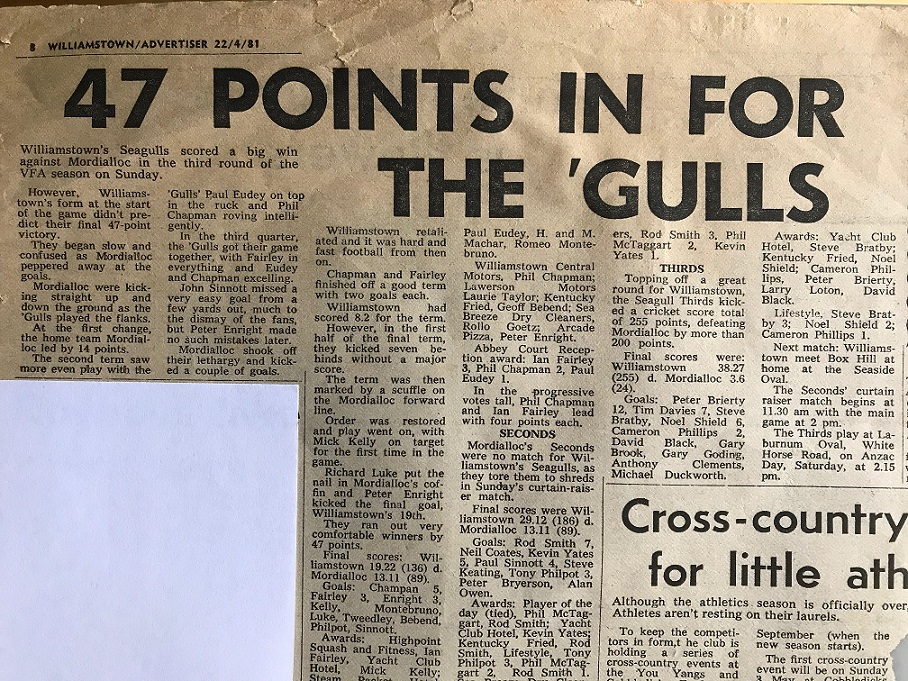 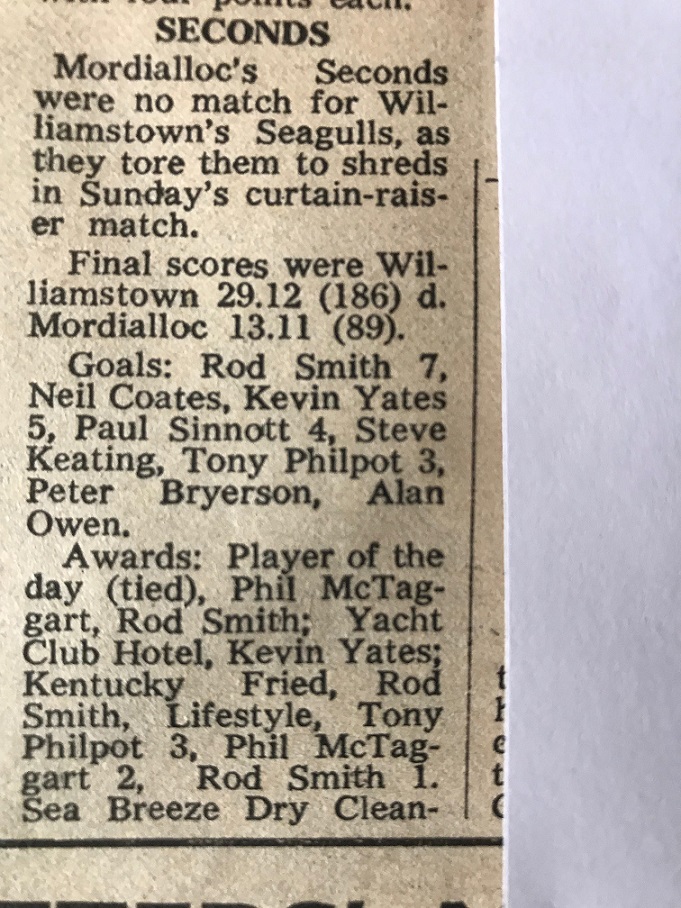 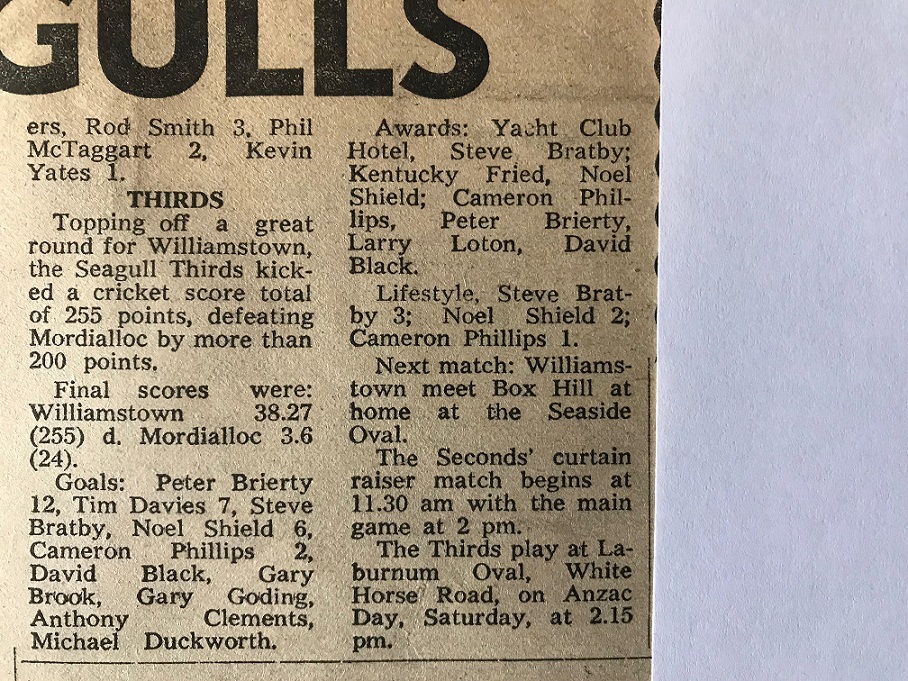 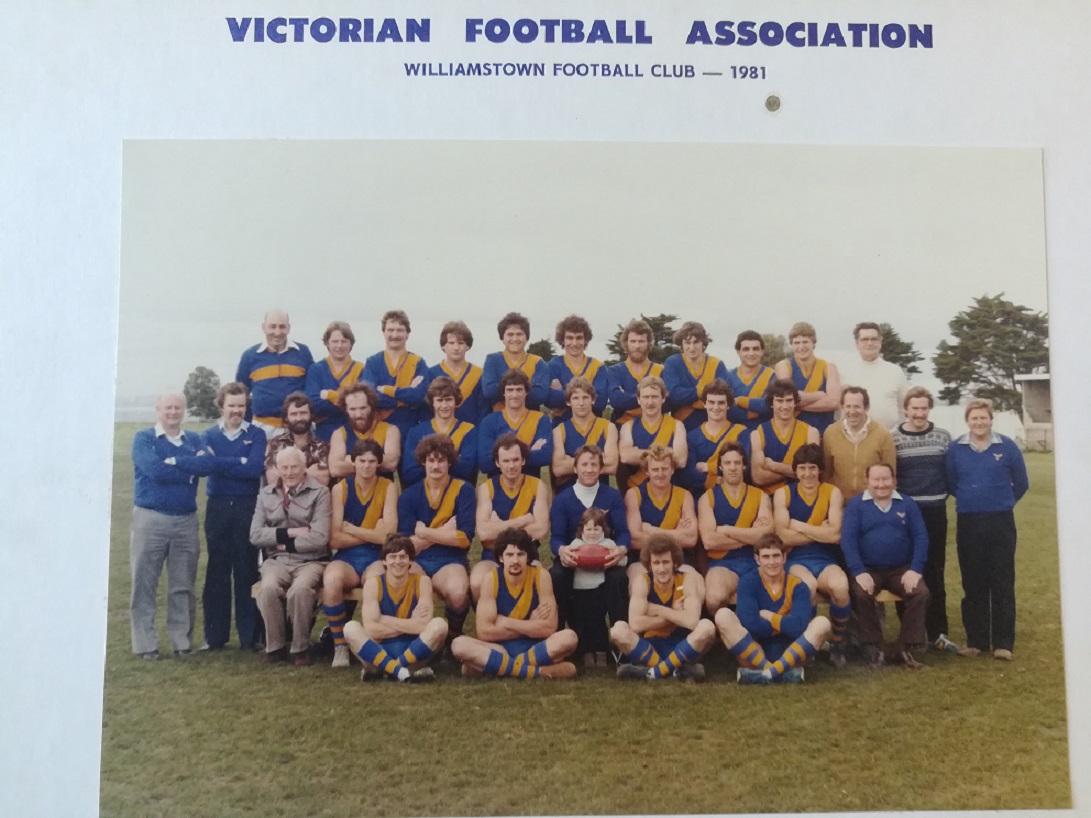 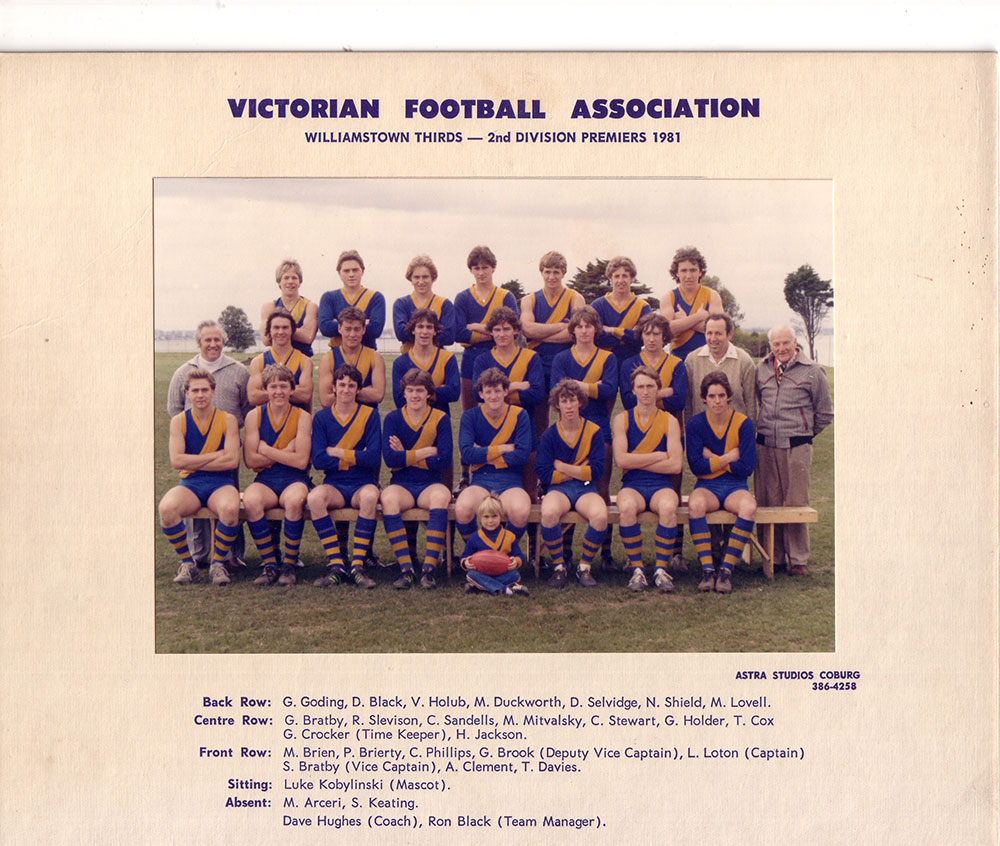 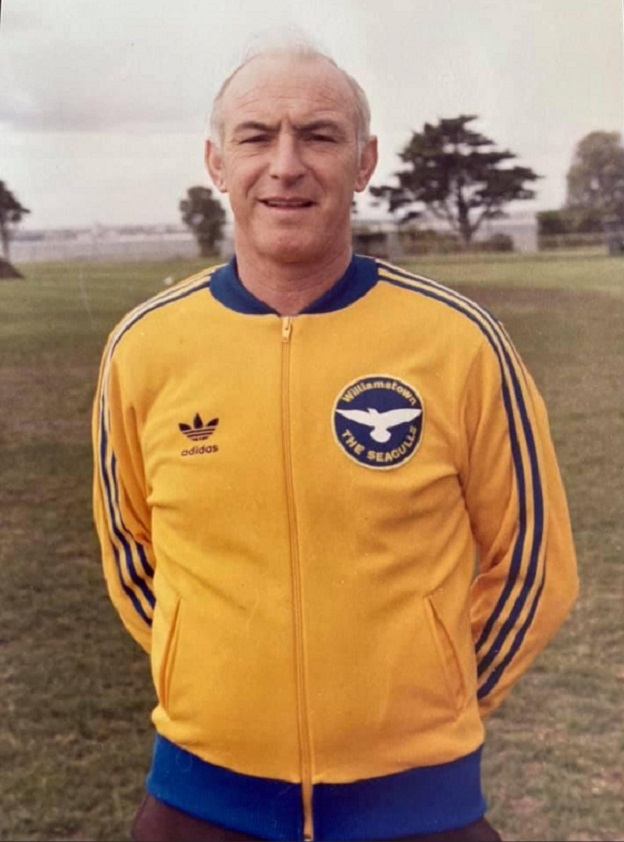 Dave Hughes, father of Kevin 'Hap' Hughes, was coach of the 1981 Williamstown Thirds premiership side 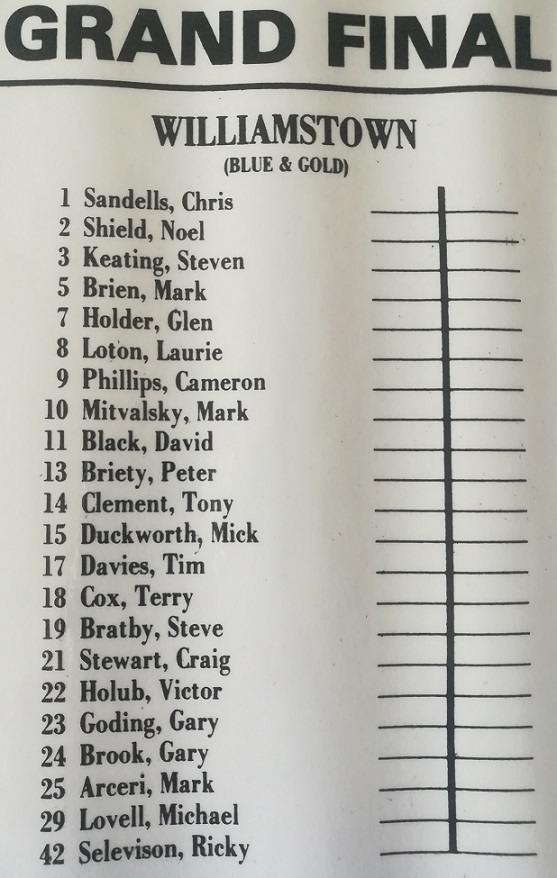 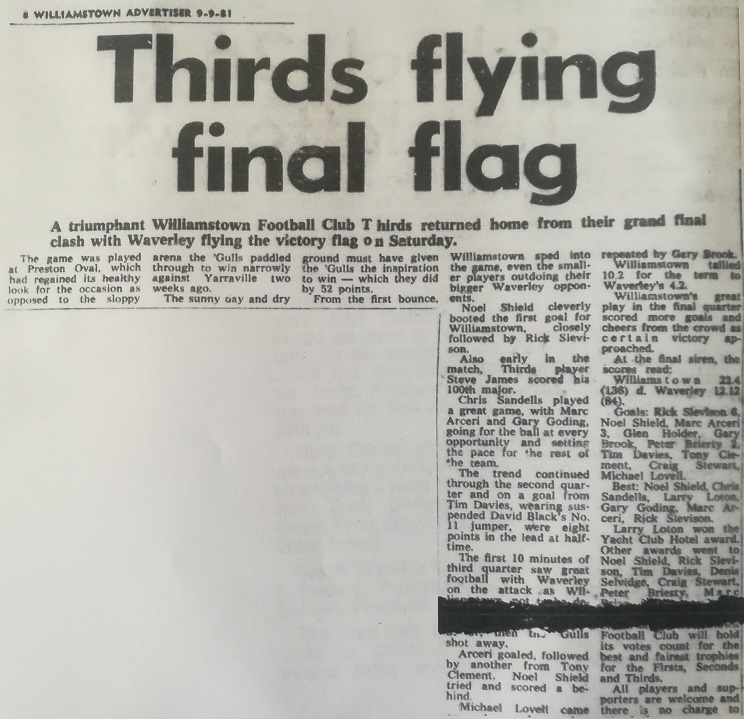 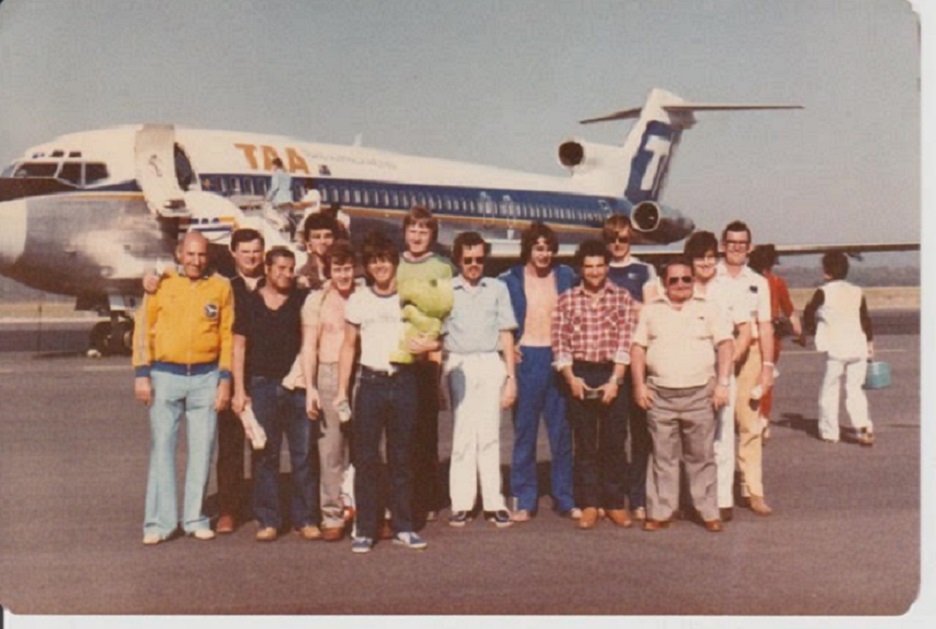 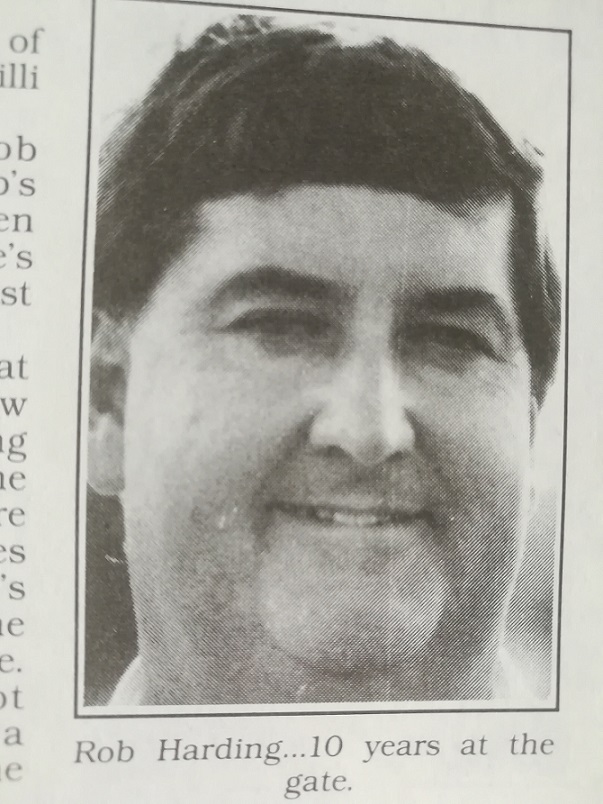 Club treasurer, Rob Harding, stood down after four years in the role from 1978-81. 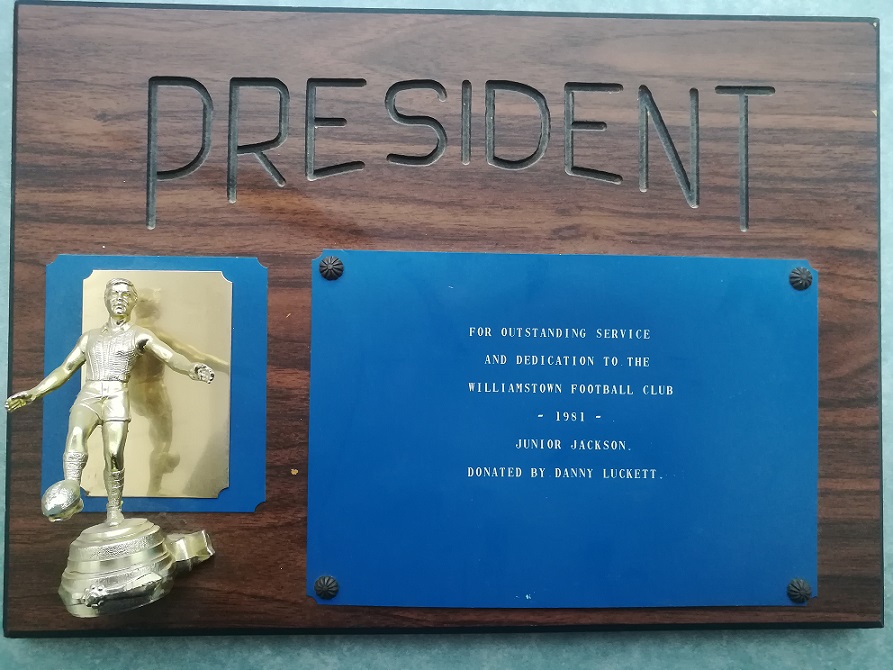 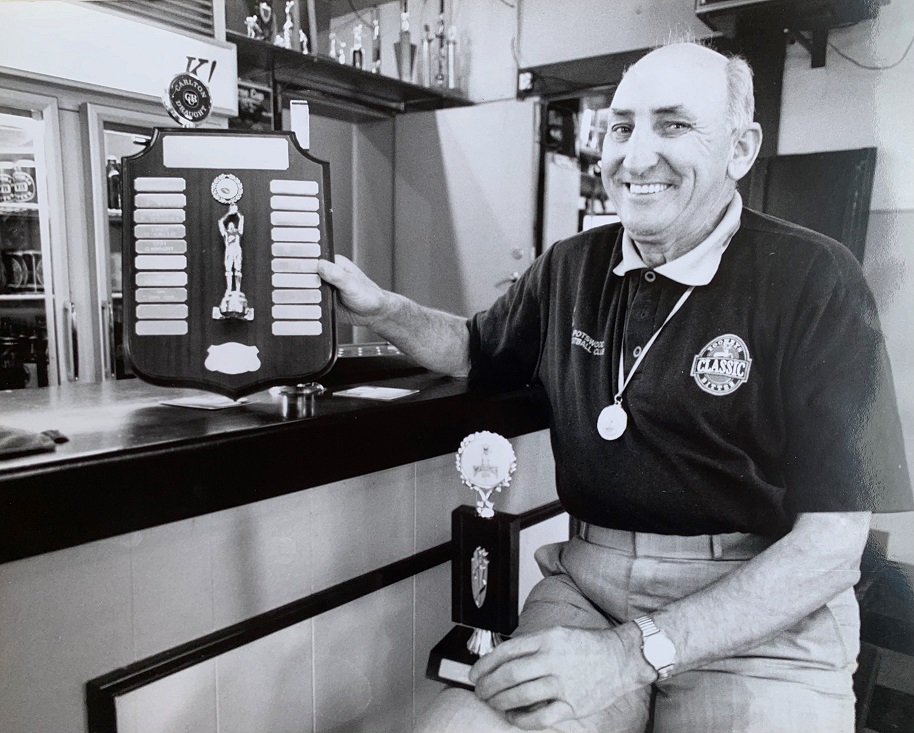 Legendary trainer, John Hogg, joined the support staff at the Club in 1981. 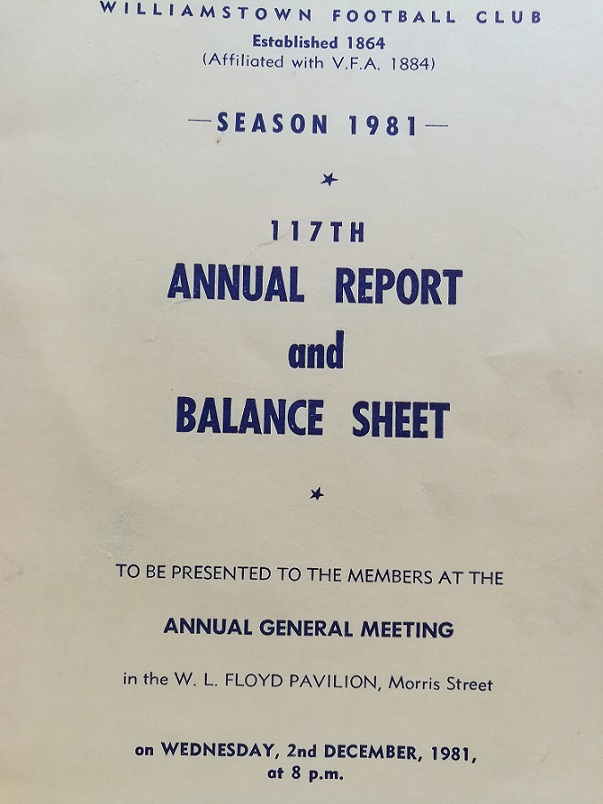 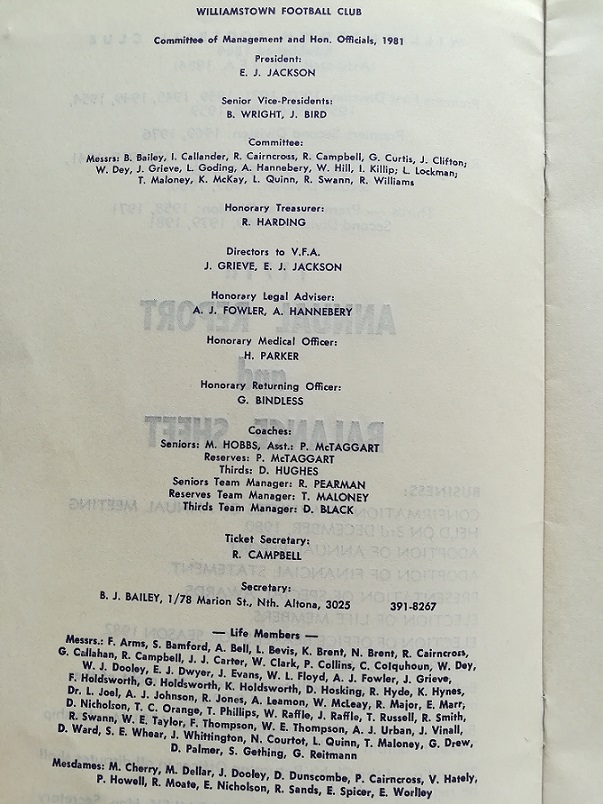 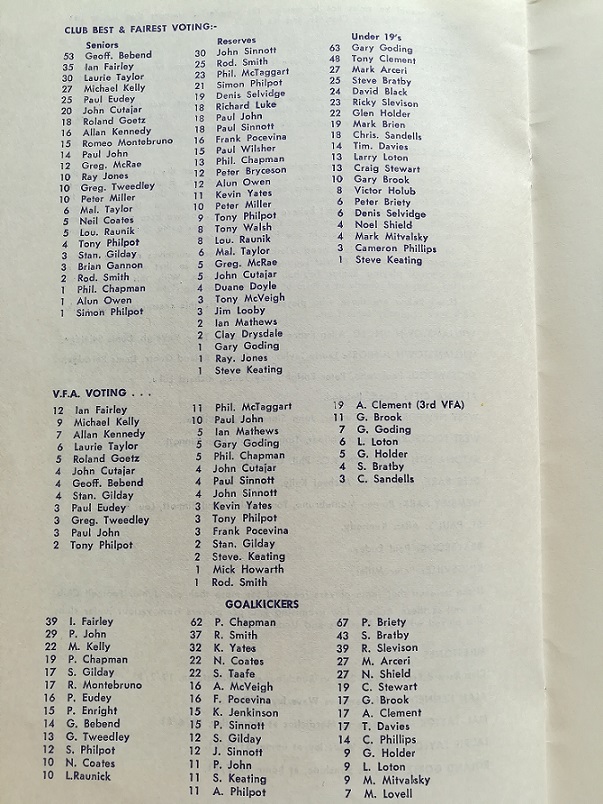 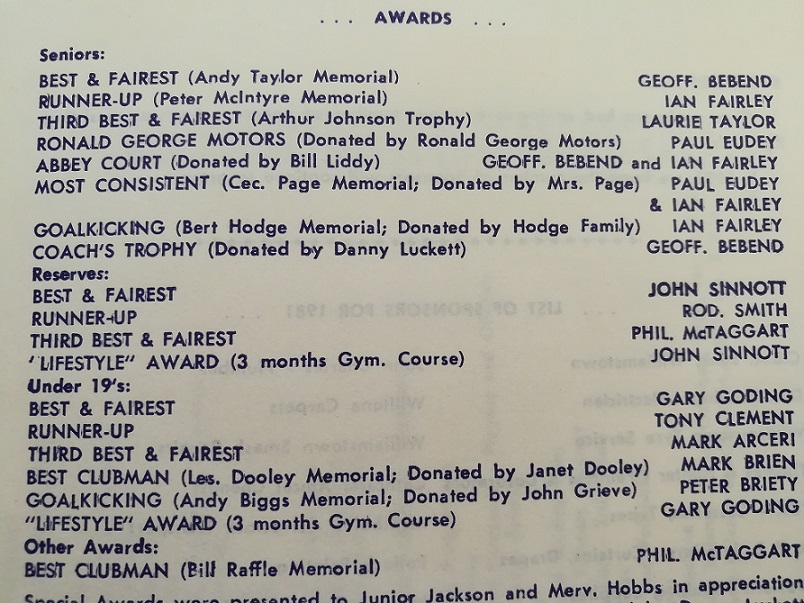