Among changes introduced by the VFA from 1980 was the order-off rule for senior games after it had been used in Thirds matches for a number of years, and the playing of Seconds fixtures as curtain-raisers to Senior games. This new rule allowed umpires to order a player to leave the field as punishment for high severity indiscretions for fifteen minutes of game time and could not be replaced, so that the team played one man short over this time period. When the Seconds competition was established in the 1920s, scheduling was such that the Reserves played at the same time as the Firsts, with the Seconds playing at home when the Firsts played away and vice versa. In the 1960s, as the Firsts gradually migrated from a Saturday competition to a Sunday competition, the Seconds had remained a Saturday competition, still playing at home on alternate weekends to the Firsts but on different days. Now, for the first time, the Seconds were played as curtain-raisers and, also for the first time, the Seconds became a Sunday competition. As a result, the Seconds finals became curtain-raisers to the Firsts finals, which had happened previously when both competitions were Saturday competitions. However, one consequence was that the lightning premiership, which had been the finals curtain-raiser since 1972, was discontinued. One further change was that the Association trialled the use of two field umpires for the first time during the finals matches in both divisions, but home-and-away matches continued to be controlled by a single field umpire through the year.

For the first time since 1972, Williamstown commenced the season with the same President and coach as the previous year, albeit with a new captain in 1979 best and fairest winner Neil Courtot. Mark Cross had moved to coach Mildura after 5 years at Williamstown, where he played 74 games and kicked 125 goals. The first victory of the campaign came in round 3 with a 10-point win over Brunswick at Pt Gellibrand. Five consecutive victories were to follow, including a win over Werribee by 101 points in round 6 at Williamstown (Peter Enright 7 goals). This was the Club's 1500th VFA game. By round 8 the Seagulls were sitting in third position on the ladder, two games and percentage clear of Mordialloc in fifth place.  Five losses in the next six games saw the team slip to sixth, before the round 16 senior debut game against Box Hill of Ian Fairley at the age of only 15 years and 10 months, where he kicked eight goals from full-forward to help the Seagulls win 25.15 to 8.9, a margin of 108 points. Senior Williamstown coach, Merv Hobbs, had invited Fairley to train and play with the Williamstown Football Club, and, in an amazing year, he played the first half of the year in the Under 19’s under coach Dave Hughes, then 4 or 5 games in the Reserves under Phil McTaggart. One week later Ian was selected for his first VFA senior game as a Year 9 student at Williamstown High School. Ian played 43 senior games with Williamstown in the VFA, kicking 69 goals. In 1983 he played the first 3 games at Williamstown before officials from North Melbourne came calling. Fairley, a nephew of 1969 Williamstown premiership centre-half back Ron Page, went on to have a distinguished 217-game career with North Melbourne. The family connection runs even deeper as the trophy awarded to the third place-getter in Williamstown's best & fairest award is named after Fairley's maternal grandfather, Cec Page.

Williamstown remained in fourth place on the table at the conclusion of the 1980 season. Before the final round, Mordialloc was third on the ladder with 10 wins, Waverley fourth with 10, Williamstown fifth with nine and Oakleigh sixth with nine. Williamstown was at home to Oakleigh and Mordialloc at home to Waverley. This meant the winner of the Williamstown game would displace the loser of the Mordialloc match. The Williamstown game was a thriller, with the Seagulls desperately defending a narrow lead to win 13.12 to 12.13, with the lead changing seven times during a hectic last term. A fine second quarter, in which it kicked 8.4 to 0.2, set up Williamstown's win. Waverley, which won by 10 points at Mordialloc, was too accomplished for 'Town in the first semi-final and won 21.13 to 13.18. The game was decided in the first quarter when the Panthers got out to a six-goal lead at the first break, 8.5 to 2.3, aided by the breeze. The Seagulls were never able to reduce the deficit by any great margin and went down by 7 goals in the end. The match was played at Toorak Park and was the first in the VFA under two field umpires.

Williamstown Reserves, under second-year captain-coach Phil McTaggart, signalled that better days were ahead for the Club by finishing on top of the ladder with 15 wins and 3 losses during the home-and-away rounds. The team went on to win the premiership, defeating Brunswick 21.22 (148) to 19.13 (127) in the Grand Final, played as a curtain-raiser to the Senior second division Grand Final on 7 September at Toorak Park. The Thirds were coached by Dave Hughes and had a young player straight out of the Williamstown United under 15 team of 1979, namely Ian Fairley, whose senior debut in round 16 of 1980 was mentioned above. They won 12 games for the year and were unlucky to miss the finals, going down to eventual premiers Northcote at Williamstown by just two points in the second last home-and-away game. Remarkably, only two players from the previous year's premiership side were regulars during the season. Mark Aceri, who would go on to play VFL/AFL football with North Melbourne, Carlton and St Kilda, also played in the Thirds in this season.

1976 premiership player and vice-captain for the last three seasons, Peter Kerr, made his 100th senior appearance for Williamstown in round 4 at Mordialloc, while Alan Kennedy (round 7 at Box Hill), Paul John (round 15 at Werribee) and Geoff Bebend (round 16 v. Box Hill at Williamstown) all played their 50th games during the year. Paul John also took out the Andy Taylor Memorial Trophy for best and fairest player in the Seniors from Greg Tweedly and John Cutajar, while Peter Enright was awarded the inaugural Bert Hodge Memorial goalkicking award with a total of 52. The Reserves best and fairest was won by Paul Eudey from captain-coach Phil McTaggart, with Greg McRae in third place. Best and fairest in the Under 19's went to Chris Sandells, with Ian Fairley runner-up and Mark Arceri third. Both of the latter players would go on to play League football. The goalkicking award in the Thirds went to Ricky Slevison, who would became a Senior premiership player at Williamstown in 1986 and 1990 and also play in the 1988 grand final.

President Sid Wookey was transferred to Canberra in his employment late in the year and was forced to step down from that role which he had carried out for the last three seasons. Also, Bill 'Darkie' Raffle passed away early in the year. He held many positions with the Club over a great period of years, and the Best Clubman award was instigated in 1980 in his honour, which continued until 2017. It was awarded to Phil McTaggart in this season. John 'Jack' Lord, coach of the Club in 1927 also passed away in 1980. 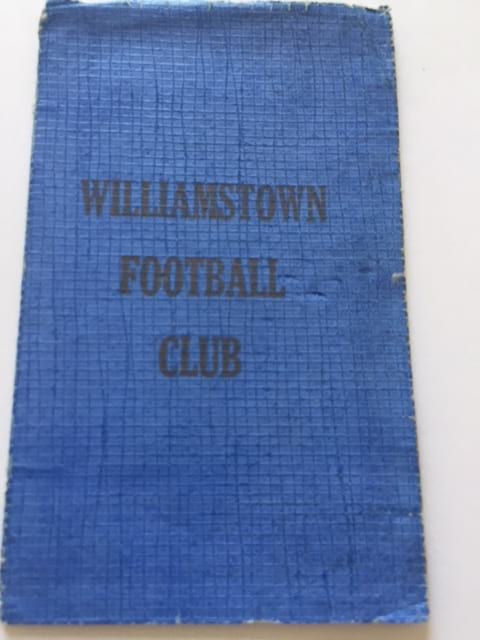 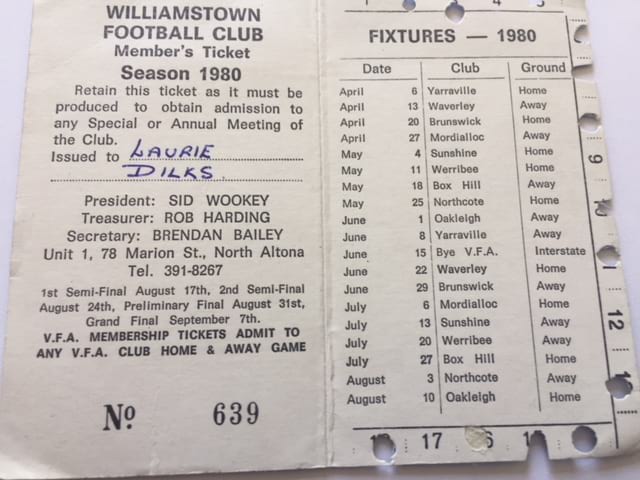 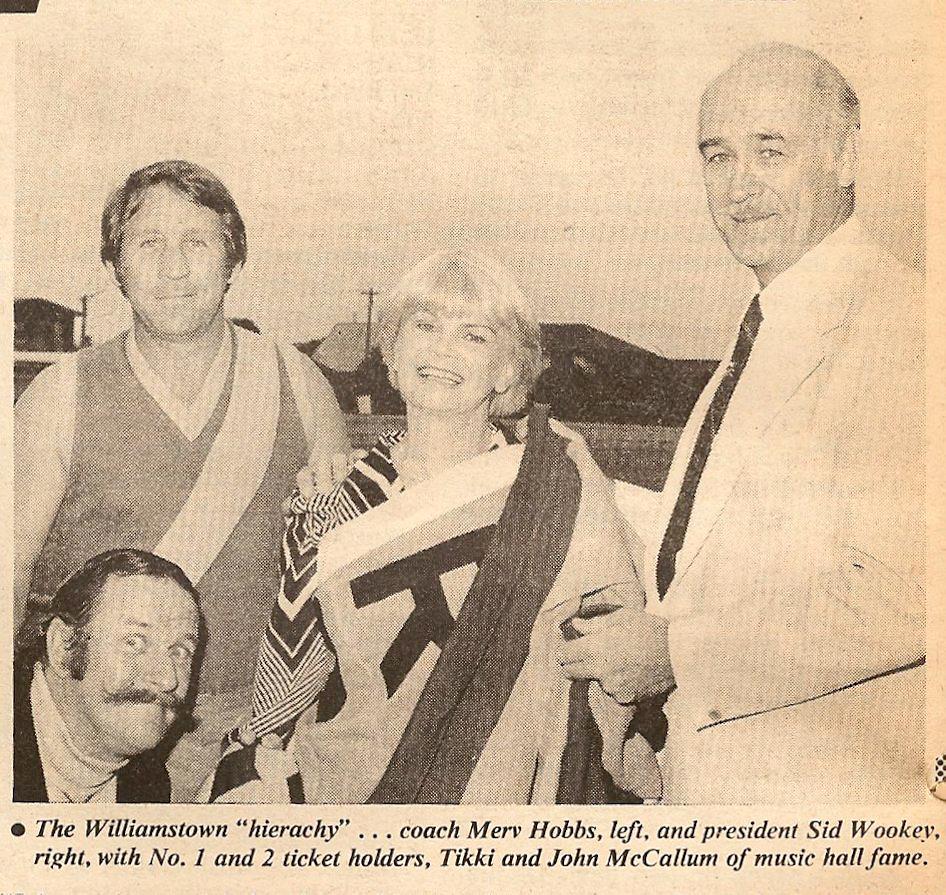 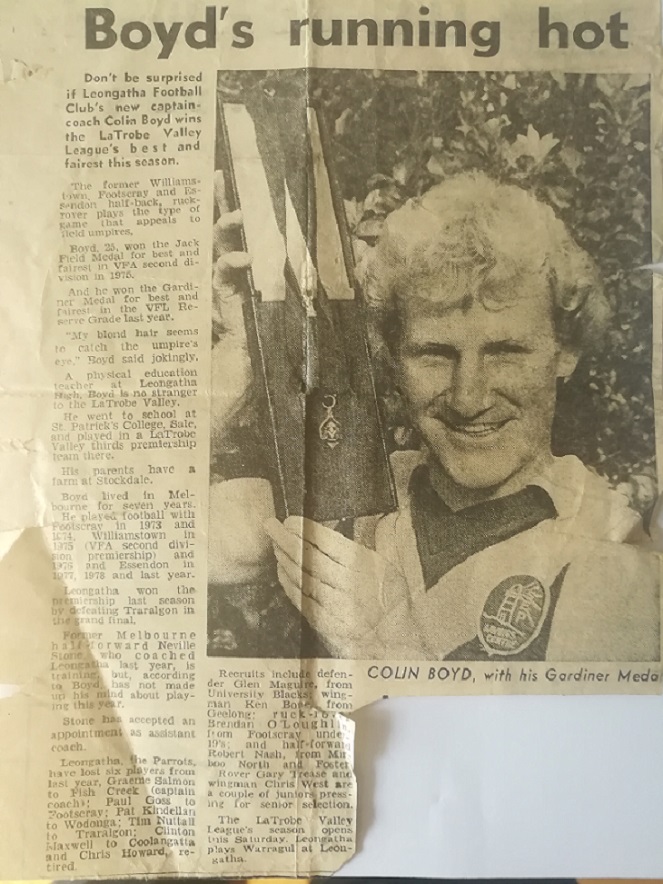 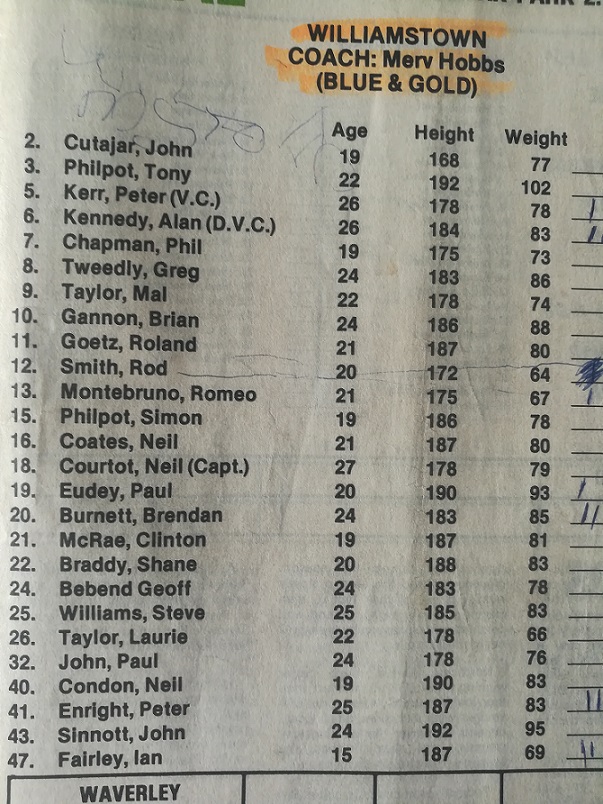 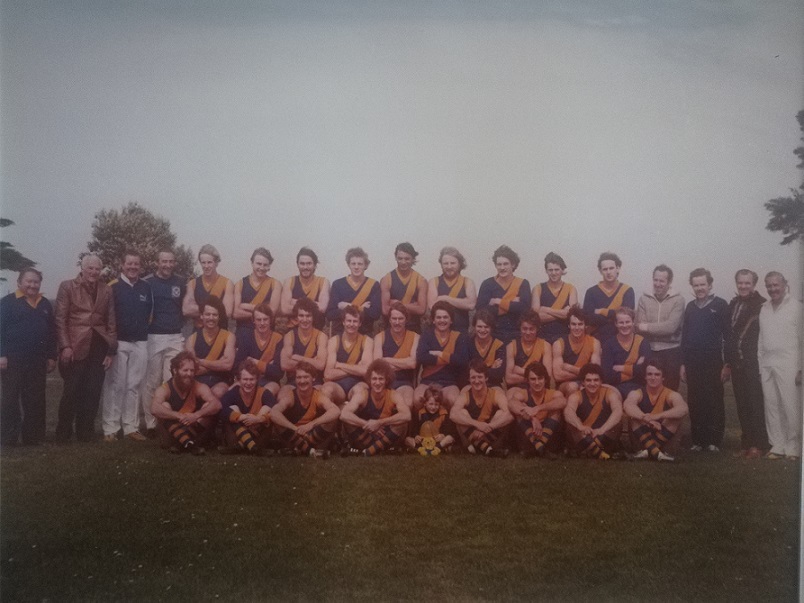 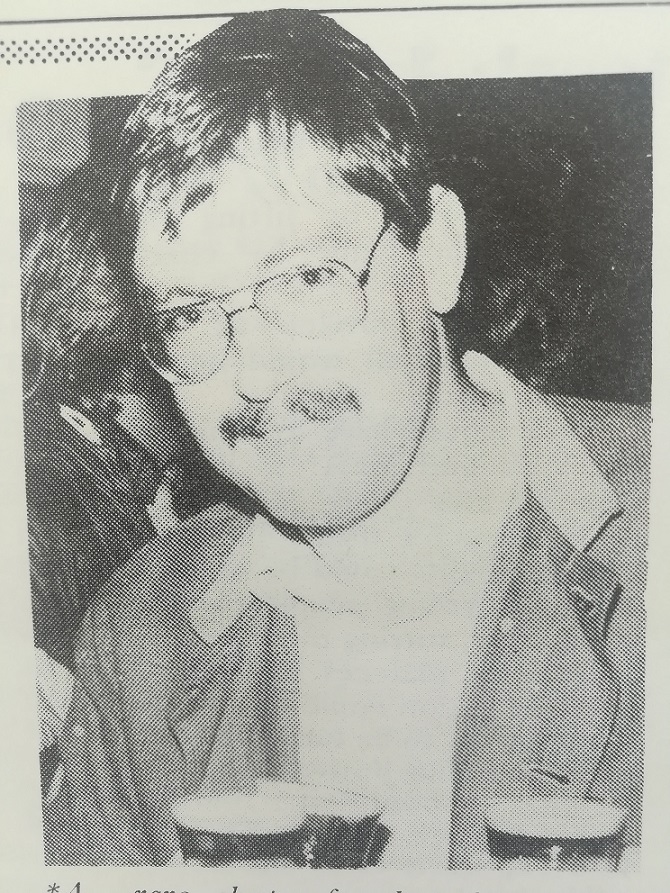 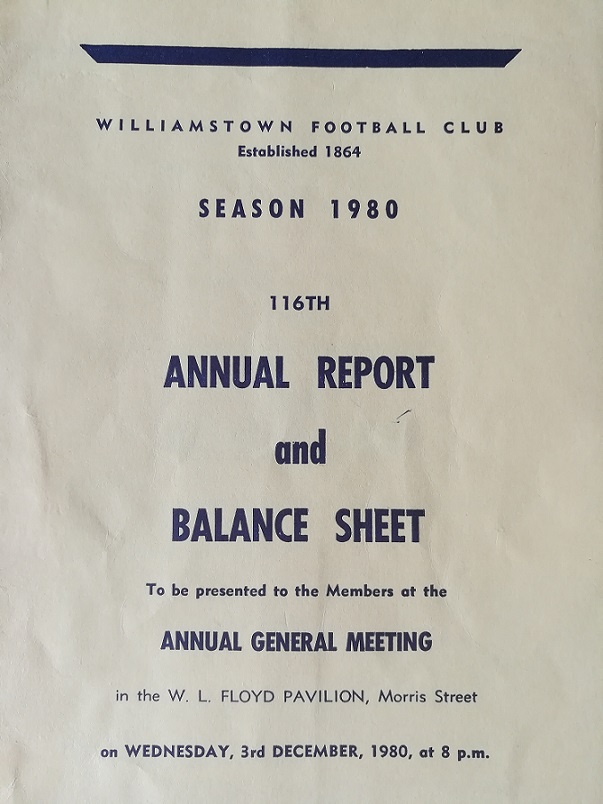 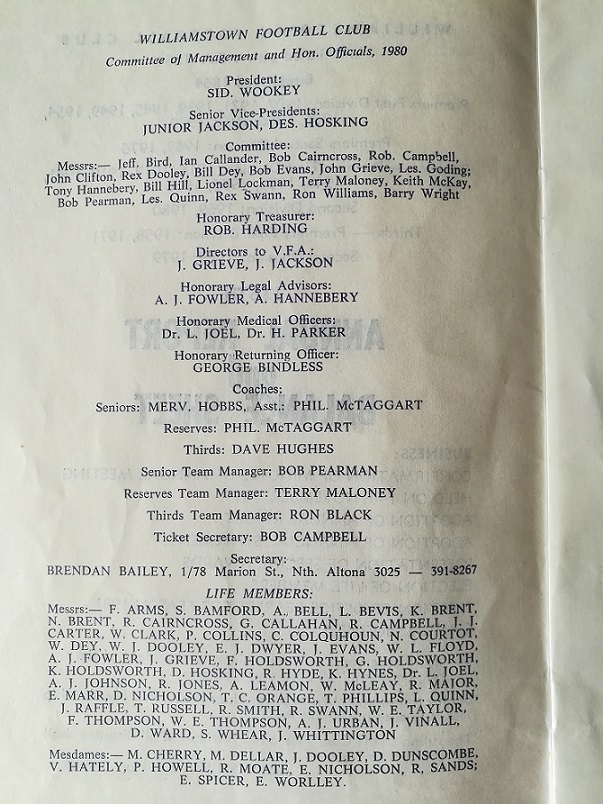 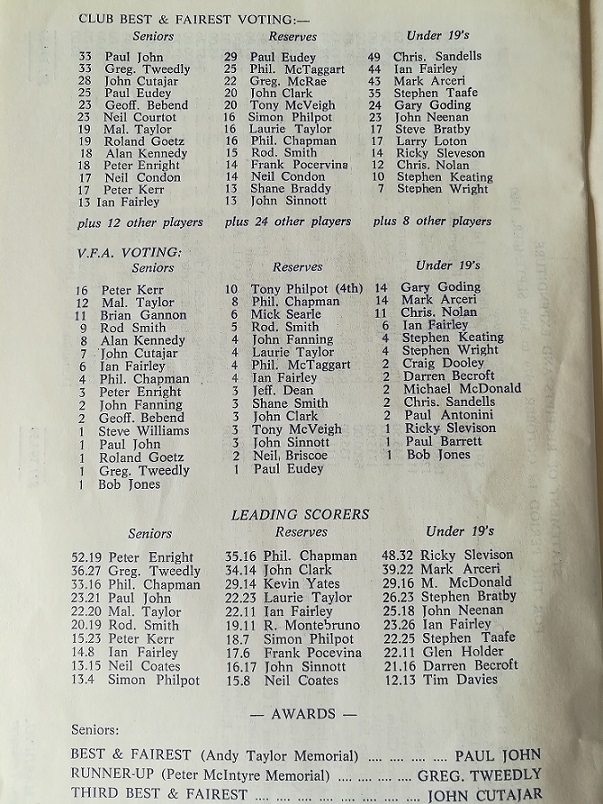 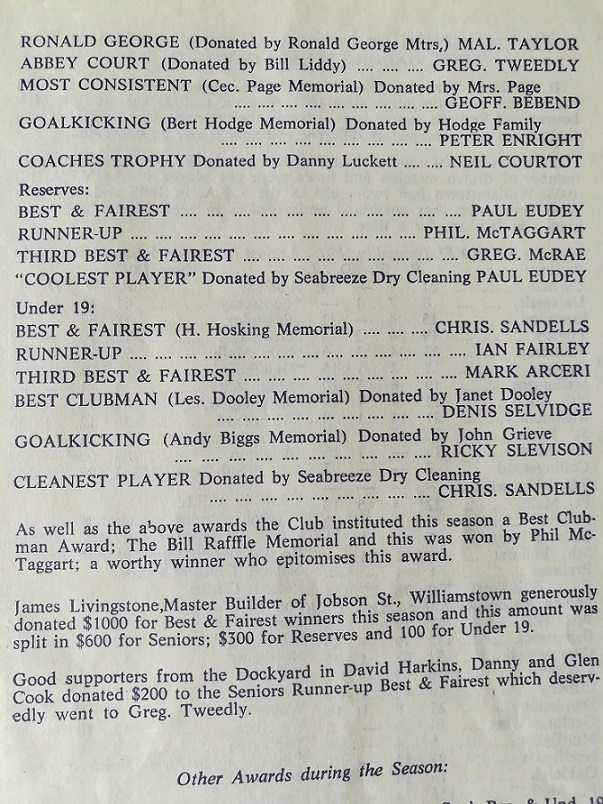