Instead of interest waning at Williamstown after the triple premierships of 1954/55/56, all entered 1957 determined to make it four in a row. Essendon had previously achieved this feat in the VFA in seasons 1891-1894 and Collingwood did the same in the then VFL over seasons 1927-1930.

This was exemplified by the team being undefeated at the conclusion of the 20 match home-and-away rounds. Williamstown finished the minor round five games clear of second-placed Moorabbin. However, the favourites were not only beaten in the second-semi but also failed in the preliminary and then had to watch two other clubs fight it out for grand final honours. Nevertheless, the run of 22 consecutive victories (two came from the 1956 preliminary and grand finals) was easily a Club record, surpassing the previous best of 14 wins, though well short of North Melbourne's great VFA sequence over the years 1914-15 and again in 1918-19 (the VFA went into recess in 1916 and 1917 due to the Great War) of 49 consecutive wins. The Seconds similarly continued their undefeated run from 1956 until the sequence was well into the thirties before they also crashed in both finals matches at the Junction Oval.

Life memberships were awarded to committeeman and fund raiser, Vic Davies, and to Mrs Elsie Flett, long-serving President of the Ladies Committee and grandmother of Les Twentyman, for their work for the Club at the annual general meeting, where Jack Carter was re-elected President but intimated that he would stand down at the end of the year. Arthur Johnson was elected president from the 1958 season onwards.

With an excellent record behind him, Wally Carter was re-appointed for a further term as coach, and Gerry Callahan was captain once again with Ray Smith his deputy. During the off-season the Club lost the services of Alby Linton after 87 games and 226 goals, as he was appointed captain-coach at Melton. Following on from Harry Simpson the year before, Jack Curran was cleared to Dimboola as playing coach. George Taafe also went coaching at Lindenow and Syd Wookey, after being troubled by a knee injury early in the season, retired after 136 games and 31 goals for the 'Town. Reg Fisher was cleared to Geelong, where he was living at the time, after playing one game in 1957 and 65 in total for the Seagulls. Roy Cullinan from South Melbourne was the best of the newcomers, which included Barry Beitzel, brother of Eric, from Carlton, Neville O'Connor from Footscray Seconds and big Tom Jones from Carlton and Footscray who only managed two games.

Football under lights came to the VFA in 1957. The matches were played at South Melbourne's Lake Oval on Wednesday evenings, and Williamstown's first two matches of the season were played at night. The first was against Moorabbin on April 17 as an 'away' fixture and the second a 'home' match against Port on April 24. Good crowds attended both games and the Seagulls had no trouble with eventual premier Moorabbin, winning by 16 points, but was fortunate to get up in the last few minutes to once more down the old rival, Port, this time by only two points. Later in the season on May 29 Box Hill was played under lights for an easy win, 17.10 to 4.11.

After the initial two night matches, Sandringham was played away, resulting in a 9-goal victory (Alan McPherson 6 goals), in the Seagulls 8th consecutive win over the Zebras. This meant it was not until the fourth round game against Yarraville at home on May 11 that the 1956 pennant was unfurled by President Carter's wife, before the 'Town prevailed by 23 points. The season's biggest victory came the following week in round 5 with a 105-point win at Toorak Park (McPherson 10 goals). This left Williamstown on top of the ladder, a position they would maintain for the rest of the season. In the return match at Williamstown in round 18, the Seagulls triumphed again by 70 points (Roy Cullinan 8 goals), in the 6th successive win over the Two Blues. After winning at Brunswick by 10 goals in round 10, the Seagulls had won the lot, exceeding their previous best start of nine wins in 1900. The remainder of the season proceeded without much anxiety, apart from the return clash at Port in round 15 where the 'Town came very close to defeat but got home by a goal, 8.6 to 6.12. Other big wins were over Northcote at Williamstown by 58 points in round 11 (McPherson 7 goals), at Box Hill by 56 points in round 20 (Cullinan 6 goals), by 48 points at Preston in round 12, by 45 points at Camberwell in round 6 (McPherson 5 goals) and at Elsternwick Park over Brighton by 7 goals in round 9.

The team managed to head the table after the twenty home-and-away rounds undefeated, five wins in front of Moorabbin then Port and Preston on percentage from Brunswick. This was the team's fifth consecutive finals appearance. After sitting in top place on the ladder from round 5 onwards, the premiership seemed a certainty, although no side had won four consecutive flags since the VFA began playing finals in 1903. The only instance when the club heading the ladder after the home-and-away rounds automatically won the title was by Essendon from 1891-94.

The finals were again played at the Junction Oval, and Williamstown started favourites in the second semi, having won 22 games since losing the 1956 second-semi final, now the Club’s longest winning sequence. This eclipsed its previous best run of 14 in 1939-40 and 1948. Played before a crowd of only 8,000, Moorabbin fielded a very tall and solid team, and from the outset showed that its players meant business, despite having recorded only one win against the ‘Town since joining the VFA. However, Williamstown's finals experience enabled it to extend their three-quarter time lead of seven points to 14 early in the final term before Moorabbin began to control play and chipped away at the deficit despite the Seagulls trying to close up the game by stacking the backline. Callahan limped off the field with an ankle injury and then rover Bruce Whalebone goaled to put Moorabbin in front. With five minutes remaining there was still time for the ‘Town to reply but Moorabbin managed to hold onto a two-point lead to run out winners, 9.16.70 to 10.8.68. Major goalkickers for the Seagulls were Gear, Ward and Cullinan with two-apiece. Williamstown, which was beaten in the air in the last quarter and failed in attack, had only one consistent winner all day in Johnny Martin.

In the preliminary, Port, which had won only one of the last seven encounters with Williamstown, lost no time in grabbing the ascendency by leading 4.4.28 to a solitary behind at quarter time, which was extended at the long interval 9.4.58 to 3.4.22. The further the game went on the greater the gap between the two teams became, with the three-quarter time scores being 14.11.95 to 4.7.31 and the final scores 18.12.120 to 6.12.48, before a crowd of 22,000. Major goalkickers were Reed and Cullinan with two each, and the best players Outen, Eric Beitzel, Ward, Jones, Sims and Whitaker. Port's score exceeding 100 points was the first kicked against the 'Town since Prahran posted 15.12.102 in round 10, 1953, a span of 101 matches. Coburg in 1945 was the only other VFA club to win all the home-and-away games only to lose both finals and bow out of the premiership race.

Moorabbin went on to win its first senior VFA premiership the following week 15.12.102 to 7.20.62, consigning Port to eight successive grand final appearances for just the one flag.

The reign of Wally Carter came to an end, and under him Williamstown had won 76 games, losing just 15 and winning three premierships. Carter’s great success with the Seagulls was noted by League clubs, and Fitzroy were very keen to gain his services in 1958. He instead returned to North Melbourne which he coached for a further five years before moving to VFA club Brunswick for the 1963-64 seasons.

Team of the Century members Ray Smith and Johnny Martin both brought up their 100th game for the Club during the year, while Alan McPherson led the goalkicking with a total of 62, despite only playing in 15 matches, and finished fifth on the VFA list. Gerry Callahan again played well and was awarded the Andy Taylor Memorial Trophy as the best and fairest player from Len Kent, despite Kent polling best for the Club in the JJ Liston Trophy and finishing equal seventh. Kent took out the Advertiser and Chronicle awards.

The Seconds extended their winning run from 1956 until over thirty consecutive victories had been recorded to again head the ladder at the end of the home-and-away rounds. However, Preston defeated the team in the second-semi 11.14.80 to 9.12.66, and then Moorabbin did likewise in the preliminary winning 13.12.90 to 6.12.48. Preston went on to win the flag. Lou Barker was again captain and coach in his final season in the role after starting in 1953 and taking the reserves to the 1954 grand final and the 1955 and 1956 premierships, the latter being premiers and champions. John McTaggart was best and fairest for the Seconds.

The Thirds finished seventh under the coaching of Murray McRae, in his fourth and final year, whilst Northcote won the premiership. Captain Doug Kellett won the Alec Gillon Medal for the VFA Third Eighteen Best & Fairest, and also won the Club's award.

The Old Players Association, once again under the control of Bert Reitman (president), Con Sheehan (secretary) and Lou Salvas (treasurer), organised a match with the Footscray Old Players Club during the year in which former stars Ron Todd and Harry 'Soapy' Vallence both appeared.

Towards the end of 1957, the VFA announced that Dandenong and Mordialloc would be admitted to the competition from the next season, no doubt prompted by the quick success of Moorabbin and Box Hill and a desire to capture growing areas of Melbourne. Also, the first television broadcast of a VFA match occurred on May 25, when the ABC televised the second half of the round 6 Oakleigh v. Preston game, which the Oaks won.

At the conclusion of the season, a party of 23 players, officials and supporters went to Swan Hill on a four-day end-of-season trip. 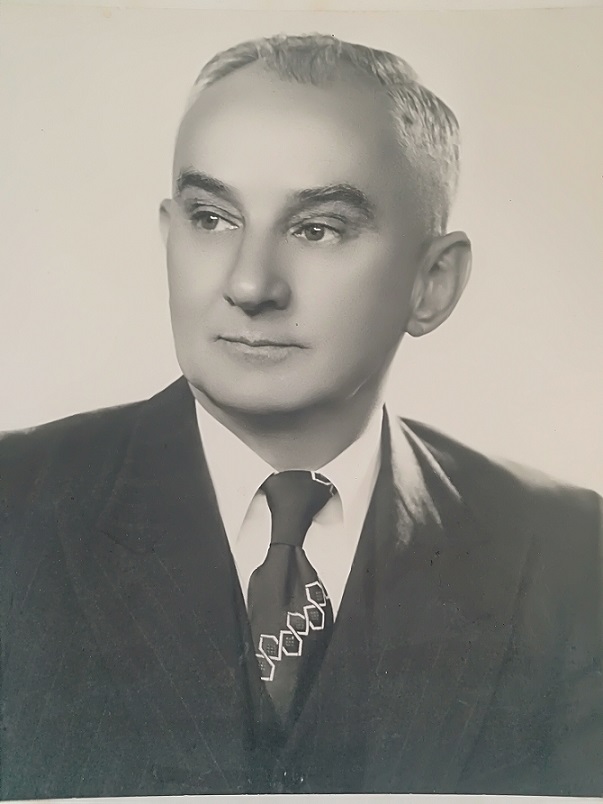 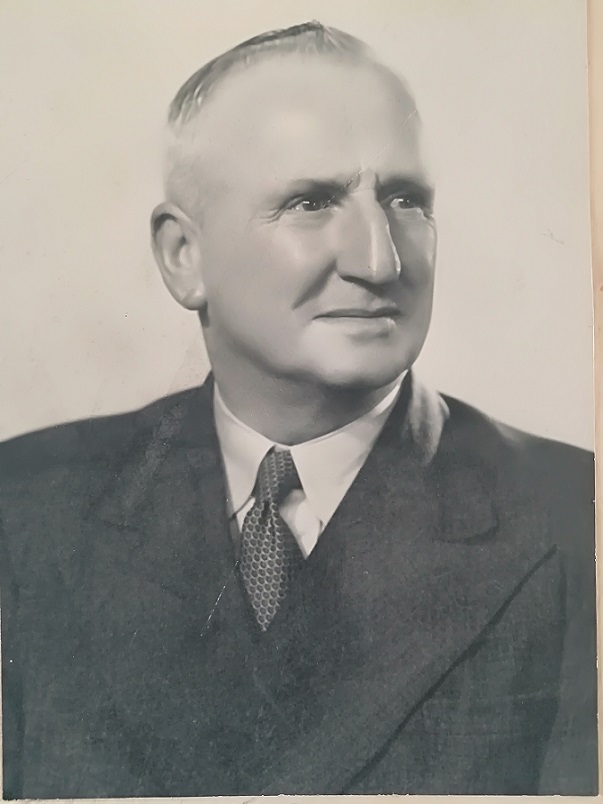 Club treasurer for over 20 years and life member, Jim McConville 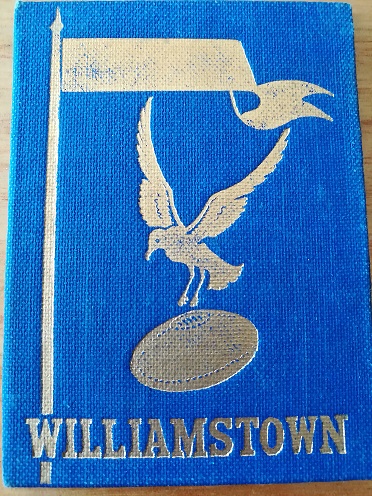 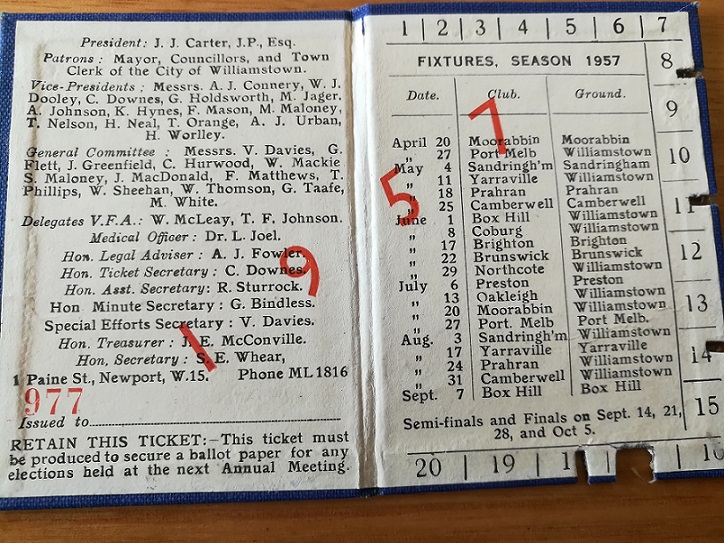 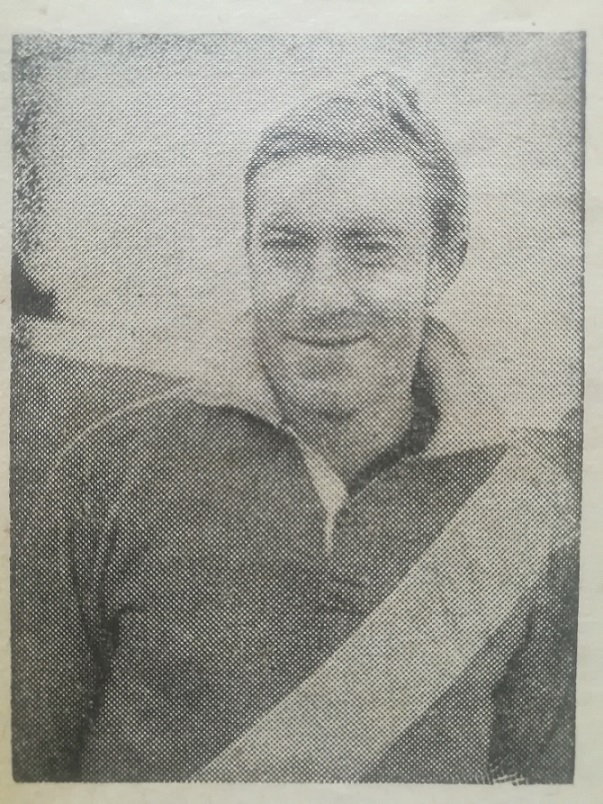 Star rover, Alby Linton, finished up after the 1956 Grand Final to take up the captain-coach role at Melton. He played 87 games and kicked 226 goals with the Seagulls, winning the Club best and fairest in 1955 and being runner-up in 1954. He was Club leading goalkicker in 1954, 1955 and 1956. He was also the VFA leading goalkicker in 1955 with 84 after kicking six in the Grand Final and ran third in the JJ Liston Trophy. He was first rover in the 1954/1955/1956 premiership teams and first rover in Williamstown's Team of the Century. Alby passed away in April 2010 at the age of 83. 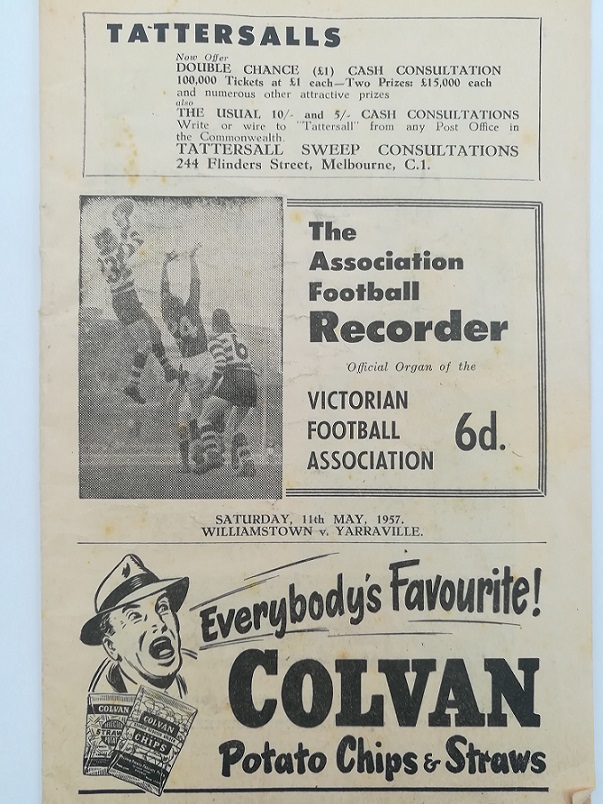 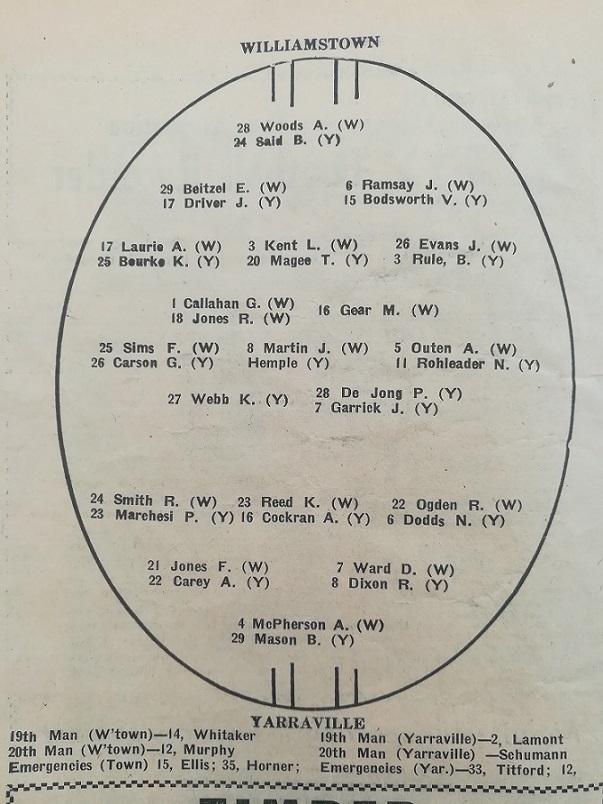 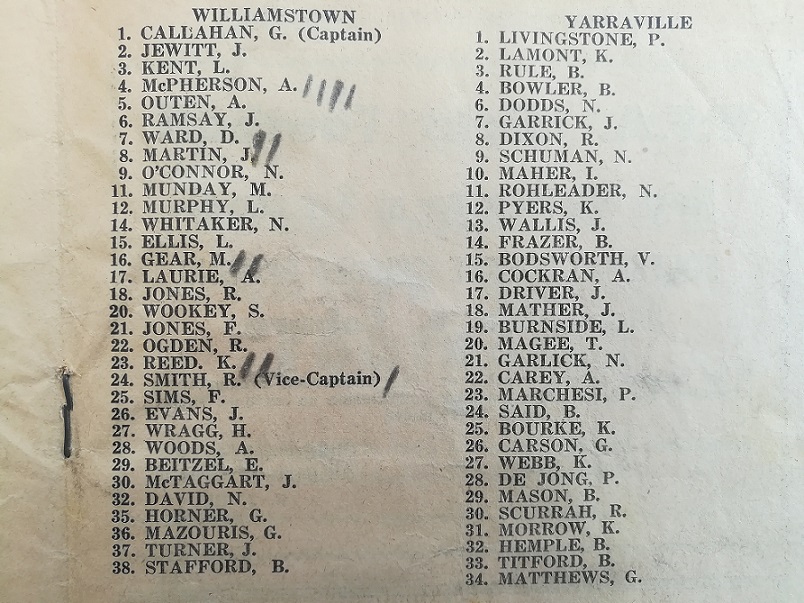 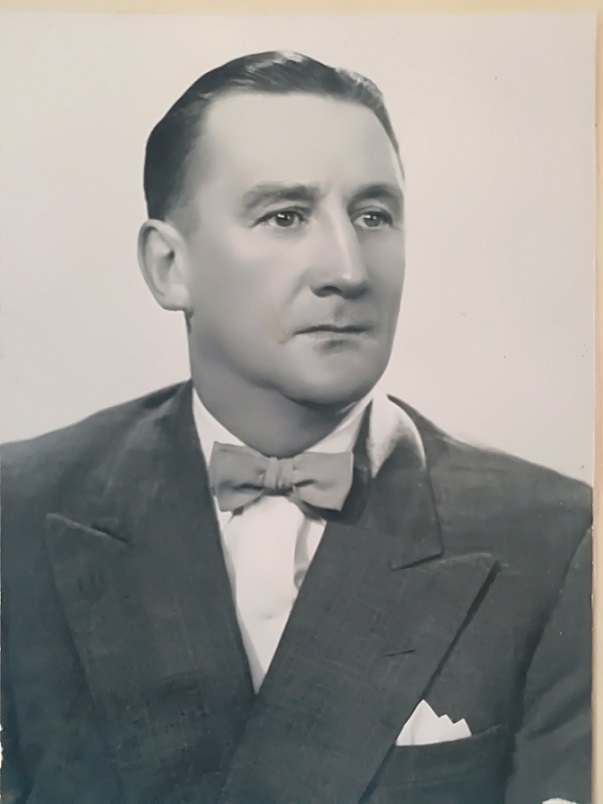 Triple premiership coach, Wally Carter, stepped down from the role at the end of the 1957 season 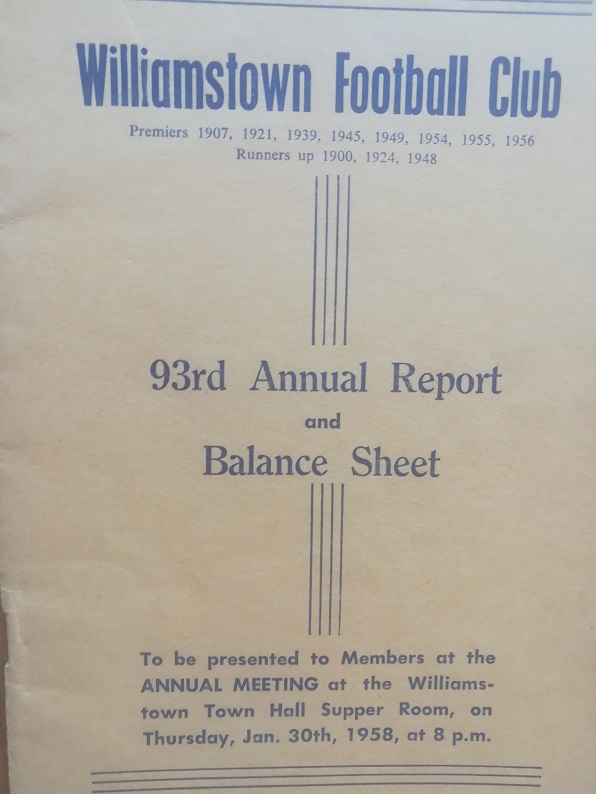 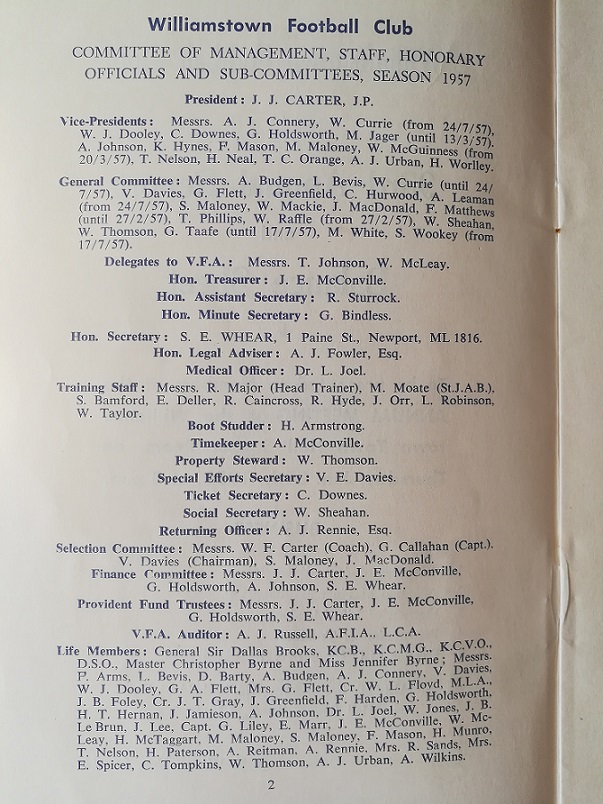 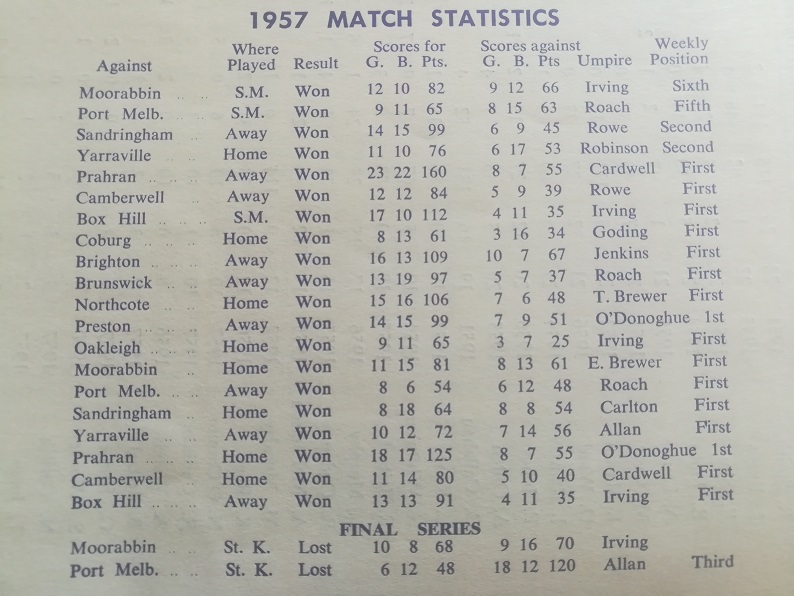 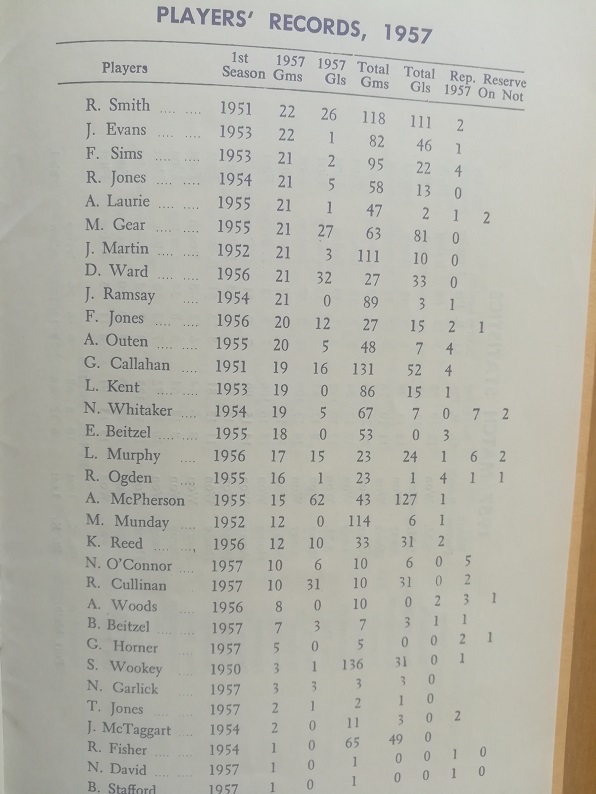 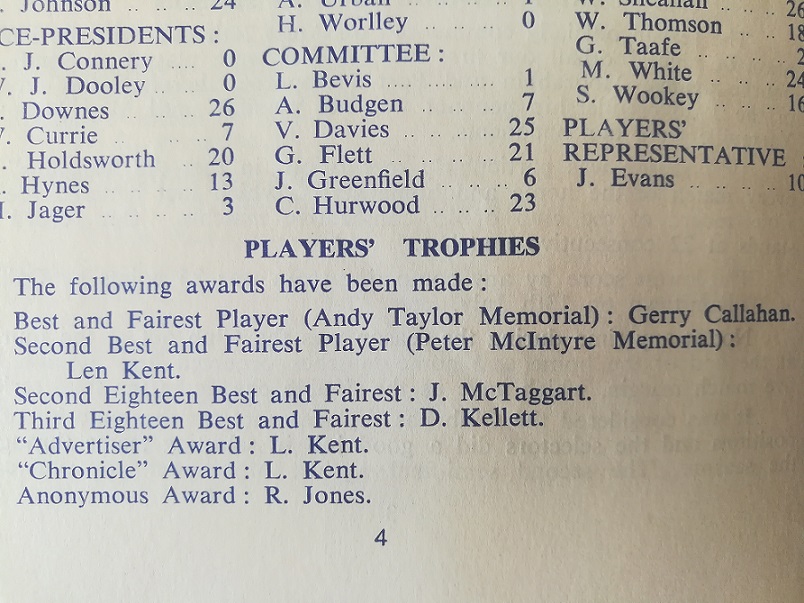 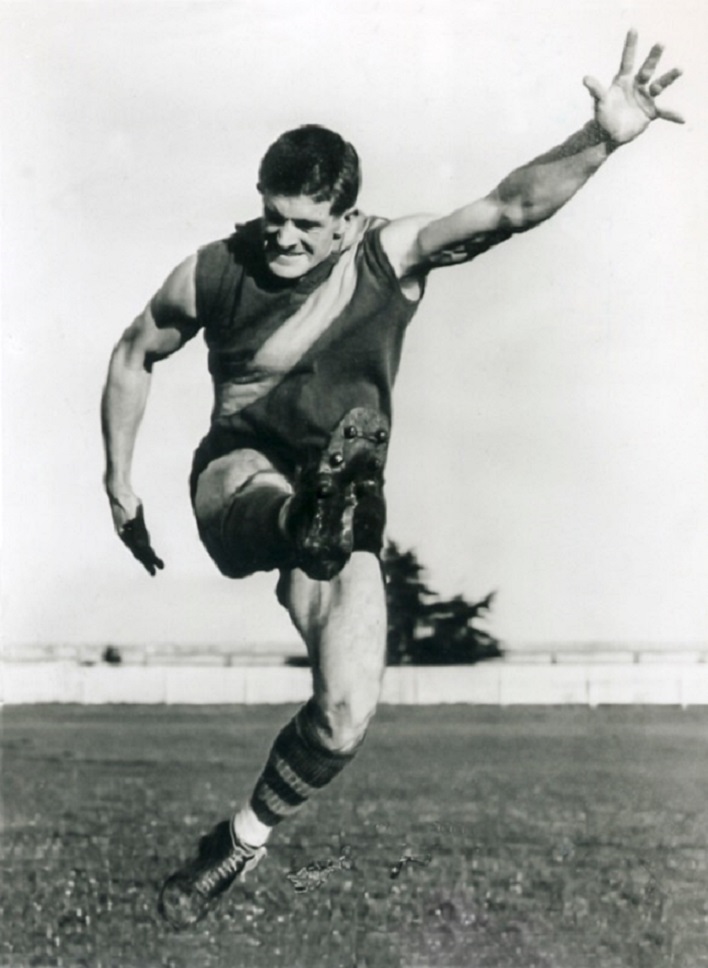