Players departing the club after the 1950 season included Gordon 'Kisser' Cameron after 79 games (coach of Wagga North, but he returned in 1952 and played a further 2 games), Mal MacPherson (coach of East Burwood), Jack Dorgan (coach of Echuca), Norm Bernard (coach of Terang), Ken May (St. Arnaud) and Vin Morrissey (retired). MacPherson was only 22 years of age but had played 84 games and kicked 198 goals at Williamstown from 1946-1950, but felt his knee, injured the previous season at Sandringham in round 8, was still a doubtful quantity at VFA level. Also, Lou Salvas retired after just a few games, leaving his record at 103 matches for 112 goals. Fred 'Snowy' Matthews similarly played a few games to reach exactly 100 during which he scored 52 goals, then transferred to Newport. Jack Danckert, last season's best and fairest winner, dropped out during the season due to his employment after 64 games and then transferred to Tooronga in 1952, and a serious knee injury to Murray McRae restricted him to just the first two games but he returned to play one further match in 1953. Adrian Dullard was again captain-coach with Reg Featherby vice-captain, but he sustained a serious injury at Oakleigh in round 9 and missed the remainder of the season, and was replaced by Alf Sampson, who brought up his 100th game in royal blue and gold in the final game of the year. Doug Howard, Les Gardner, Kev Taylor, John Fowler and Arthur Vernon were others who missed large parts of the season due to injury.

Recruits included 19 year-old Bill Gunn from Seddon, who would go on to play 104 games with South Melbourne, club legend Gerry Callahan who joined from Moonee Ponds CYMS, Noel Allanson after 57 games with Essendon and promising juniors Ray Smith (Seddon),  Bob Chapman (Spotswood), and Jack Heslop, Jimmy Davies and James Paton from the Seconds. Bill 'Bomber' Wells made another of his periodical returns to the club but found most of his old team mates had either retired or transferred and he failed to see out the season. Jack Rennie, a nephew of former Williamstown secretary and life member, Arch Rennie, played with the Seagulls in the period 1950-52 (11 games, 3 goals) before turning his attention to boxing, and going on to train world bantamweight champion Lionel Rose in the late 1960’s.

Murray McRae gave Williamstown good service from 1946-53 as a ruckman, playing 79 games and kicking 21 goals, after graduating from Spotswood under 18's and later coaching the Seagull Thirds from 1954-57, including the 1955 grand final. He was a member of the 1949 premiership team, played in the losing 1948 grand final and won the most improved player award in 1947/48. Perhaps his greatest deed for the Club was carried out at the Newport Railway Workshops where he convinced a fellow employee, Gerry Callahan, to try out at Williamstown in the 1950 practice matches, which he did but returned to his junior club, Moonee Ponds CYMS, for that season but was back at the Seagulls in 1951 and did not leave until the end of the 1967 season. An instant success, ‘Monster’ would spend the next 17 seasons at ‘Town as player, captain and coach. He became the only player to captain five VFA premiership sides (1954/55/56/58/59) and later coached the team to the 1961 and 1964 grand finals and steered the VFA representative teams from 1960-65. He was named captain of Williamstown’s Team of the Century, was selected at centre-half back and was named as one of only six Legends in the Club's Hall of Fame. He would play 171 games, kicking 75 goals and winning the best and fairest award in his first season and again in 1957. He was also named as coach of the Williamstown Team of the Decade for the 1960's. Callahan did not play football until he was sixteen due to asthma and he was essentially a battler during his early years with Moonee Ponds CYMS. He improved quickly at Williamstown due to an ability to adapt to the higher standards of the players around him, so well that he tied for the best and fairest award in 1951 in his first season at the age of 22 with Gordon 'Splinter' Williams. He started as a ruckman, was later used at centre-half back or centre-half forward and then shifted himself back into the ruck.

After Williamstown's grip on the top position was loosened in 1950, the team failed to recover in the season that followed and slipped down to seventh position, its lowest finish since 1938. Loss of star players and a bad run with injuries were the physical reasons for the decline, but five consecutive victories to start the season against Yarraville, Preston, Northcote, Brunswick and Coburg, none of which made the finals, but it gave 'Town great optimism, and saw it sitting on top of the ladder. Two narrow losses, at home to Brighton by two points and away at Sandringham by four points, saw the Seagulls tumble to fifth position by round 7. Rounds 9-19 saw seven defeats, five of which were by two goals or less, and a draw at Box Hill in the first encounter with the newcomers, saw the team slide to eighth on the ladder. A loss to Coburg at Williamstown in round 17 by 7 points settled the team's last chance four matches before the end of the home-and-away round of games. Some pride was restored with a 20-point defeat of Prahran, the eventual premiers, in the last match. The runners-up, Port Melbourne, also lost at Williamstown during the season in round 10 by 15 points, 13.9 to 9.18, with Johnny Walker kicking six goals. 'Town finished with ten wins, nine losses, the draw with Box Hill and seventh place on the ladder.

Box Hill and Moorabbin both gained admittance to the VFA for the 1951 season, the first inclusions since Oakleigh, Sandringham and Camberwell joined the VFA in 1925. Moorabbin won three games whilst Box Hill's only points for the season came as a result of the draw with Williamstown in the round 13 game at Box Hill, played on a sodden oval, ankle-deep in mud in places. Despite the wet conditions, the ‘Town led by a goal at quarter-time and two points at half-time. Box Hill was five points ahead at the last change before Williamstown regained the lead, only to lose it again, and with time running out scores were level at 8.8. Johnny Walker, who had kicked five goals, marked about 40 metres from goal in the final minute but his kick failed to make the distance due to the heavy ball and Box Hill cleared to earn its first points in the competition. Williamstown also lost at home to Northcote for the first time since 1938, to Preston in any game since 1941 and Sandringham and Brighton won both encounters against the Seagulls for the first time since 1933 and 1937, respectively.

The Seconds again made the finals but were eliminated by Yarraville in the first semi-final, 10.18.78 to 11.7.73. There was some drama before the game when it was discovered that the player's jumpers had been left behind at the Morris Street ground, delaying the start of the game by 18 minutes. Joe Lyon was still captain-coach with dual Seconds best and fairest winner of 1948/50, Leo Tweedly, vice-captain while Jack Heslop won the Club best and fairest award for the Reserves. The Club fielded a Third eighteen for the first time in 1951 in the VFA Sub-Districts Association and played curtain-raisers to the seniors instead of baseball, which then played before the Reserves on the opposition’s home ground. The Thirds, under coach Ken Bravo and captained by Brian Lowry, made the finals in their inaugural season but were defeated in the first semi. The Thirds best and fairest was won by J. Carter.

Gerry Callahan played sixteen matches in his debut season and tied with Gordon 'Splinter' Williams for the best and fairest award, which from this season until the year 2000 was named the Andy Taylor Memorial Trophy. Sid Wookey finished in second place. Shortly before the end of the 1949 season, Taylor had died suddenly at the age of just 25. He had played 26 games, including one in 1949, but he was held in such high regard by the Williamstown community that the Club named its best and fairest after him. He had joined the Club as a 16 year-old in 1941 from Williamstown High School, and in between RAAF duties during the war recess, he went to Carlton seconds with Harry Vallence. A knee injury sustained in the war stopped him playing regularly with Williamstown after the resumption, and he put his leg in irons for twelve months in an attempt to regain fitness. During 1949 he played some games in the Seconds and appeared ready for senior football, but after being selected in the seniors at Coburg he was forced off early in the game with a recurrence of the knee problem and passed away two months later. It was not only the football world that was shocked by his passing but many youth and church organisations lost one of their best workers. Bill Gunn was awarded the best first-year player, Alf Sampson the most consistent player, John Molyneaux the most serviceable player, Keith Abberton most effective player, Cliff Poole most improved player while Johnny Walker and Don Rogers received trophies for special services.

Johnny Walker bettered his goal scoring of the previous season and kicked a total of 84 to finish third on the VFA list behind Bruce Harper of Sandringham with 104 majors. Gordon Williams represented the VFA in a game against Tasmania at North Hobart on 30 June, which the Association won by almost 15 goals.

Since the VFA resumed in 1945, Williamstown had played 153 matches for 107 wins, 44 losses and two draws. Of the 72 games played at Pt Gellibrand, only 8 resulted in defeats. Over that time, 2 premierships had been won, once runner-up, twice third, one fourth and the lightning premiership of 1946.

Tom Hernan and Bert Paterson received life membership at the Annual General Meeting, and Harold Hosking was re-elected as president. Three former officials passed away during the year, namely former committeeman of 1939-46, Ern Pinckney, who was also chairman of selectors in the 1945 premiership season, ex-committeeman of 1936, Bob Hope, and vice-president of 1936 and 1939-50 and life member, Edward Duncan 'Peter' McIntyre, who was also licensee of the Bristol Hotel, in January. The runner-up in the best and fairest award from this season onwards was given the Peter McIntyre Memorial Trophy.

For the sixth time since 1945, the Club went on an interstate end-of-season trip, this time to Hobart. 40 players, officials and supporters made the 9-day trip aboard SS Taroona, sailing from Melbourne on October 18.

Former secretary and vice-president, Larry Floyd, was appointed Carlton FC's first full-time secretary during 1951, a position he would hold until May 1955 when he was elected to the Victorian State Parliament. 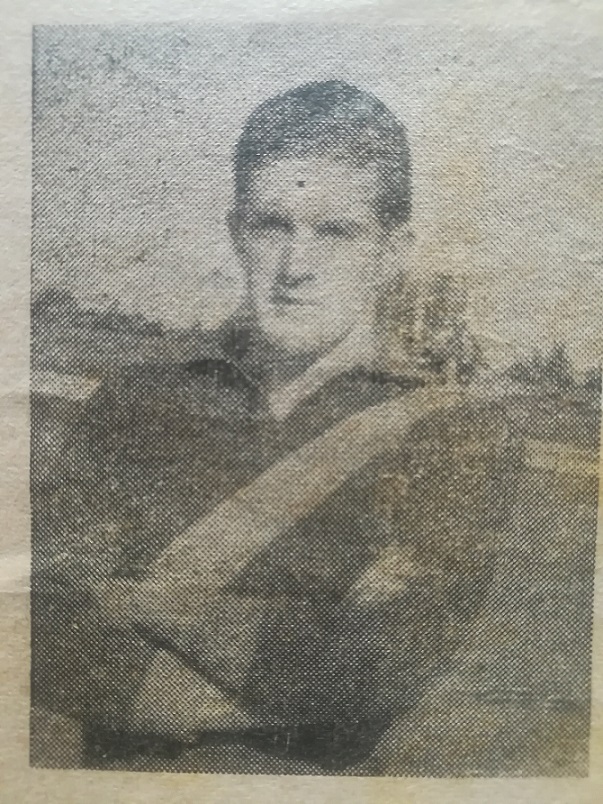 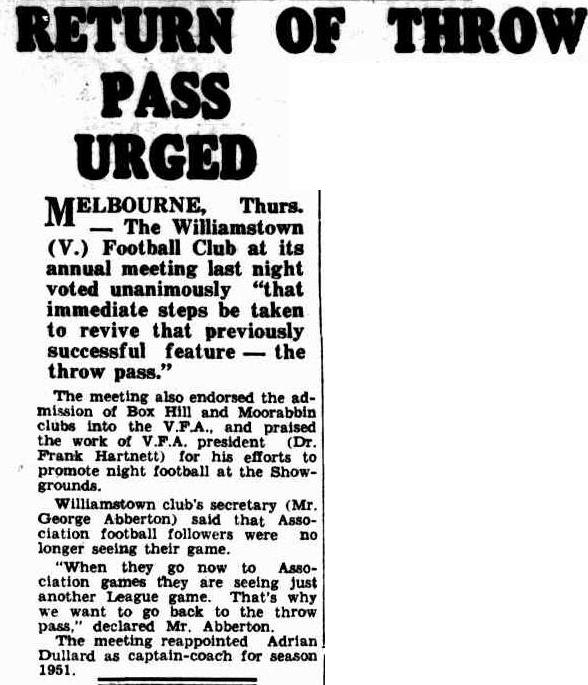 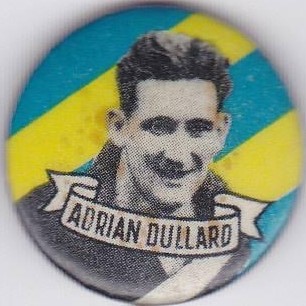 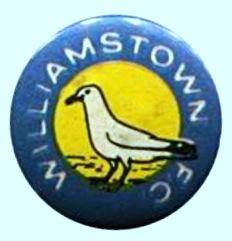 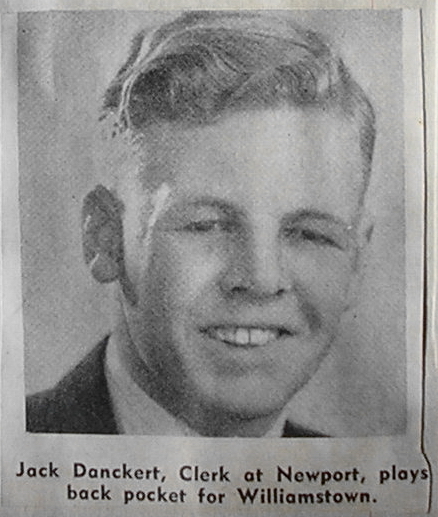 to a change in his employment, and transferred to Tooronga in 1952. 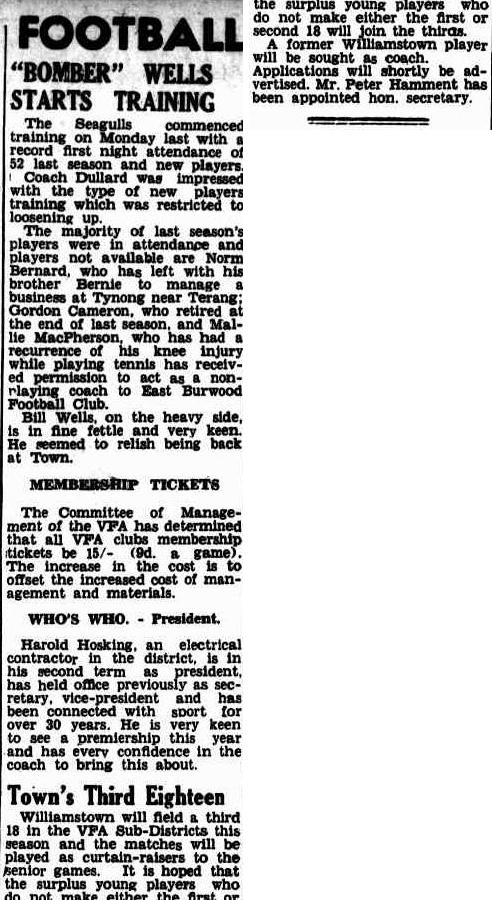 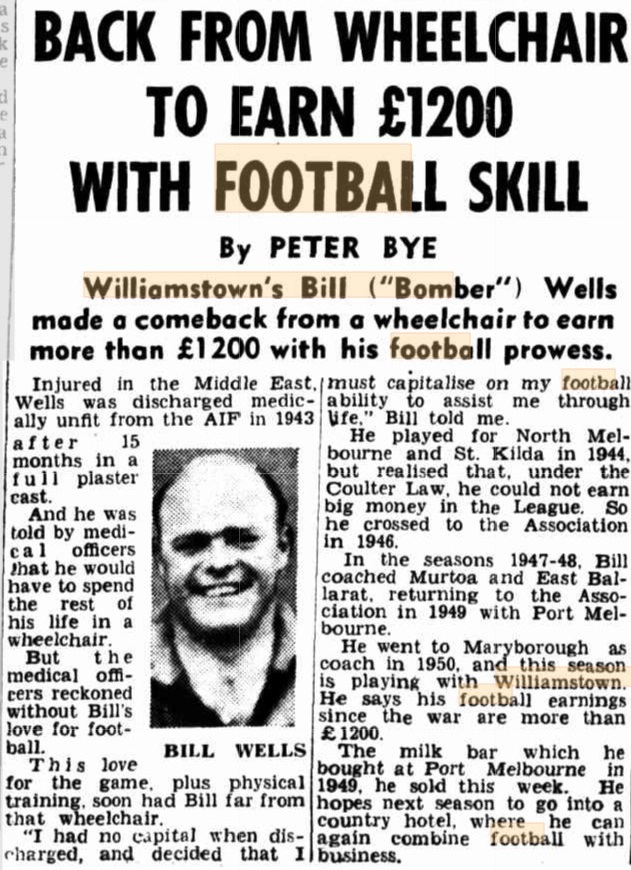 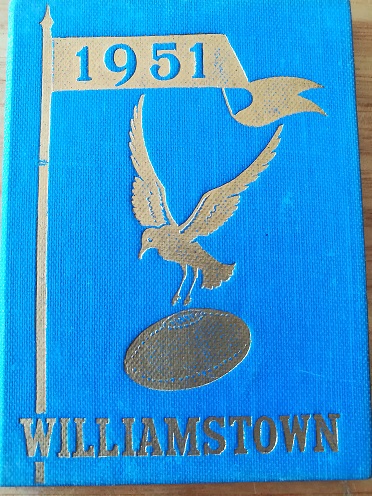 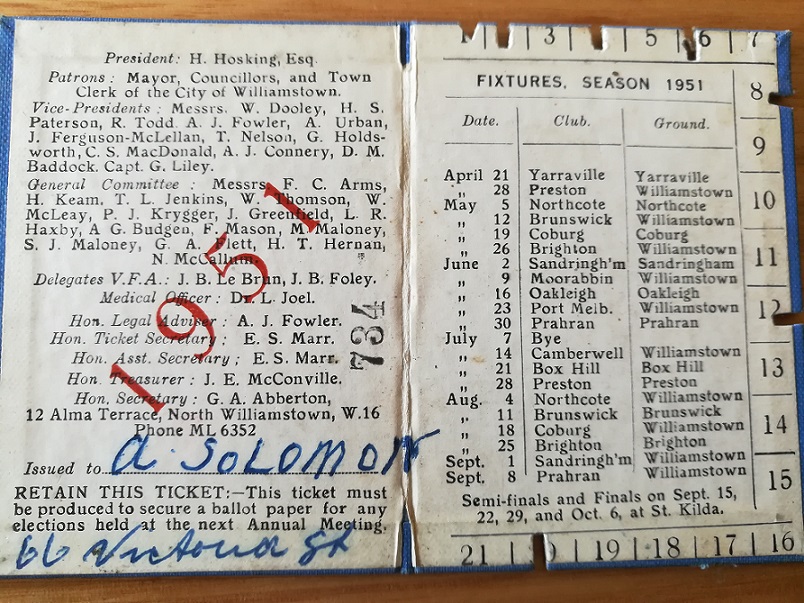 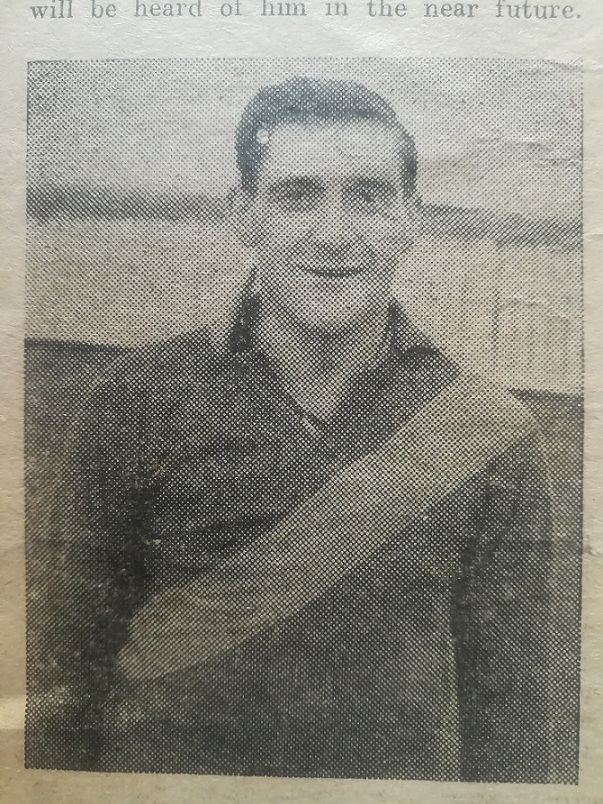 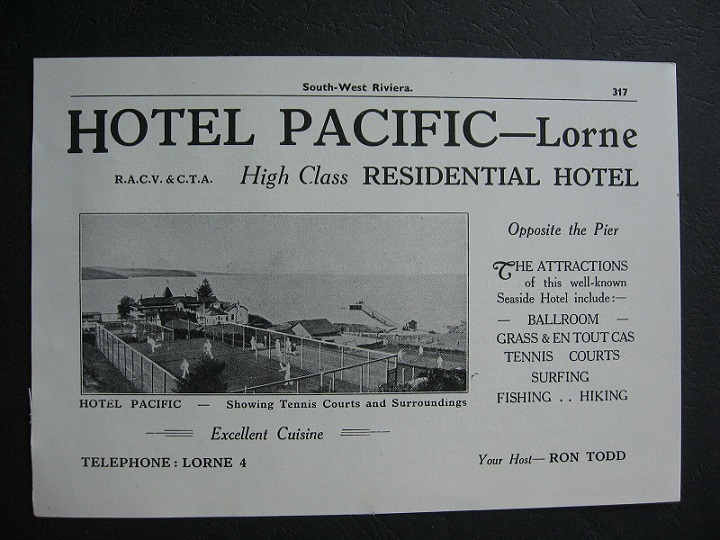 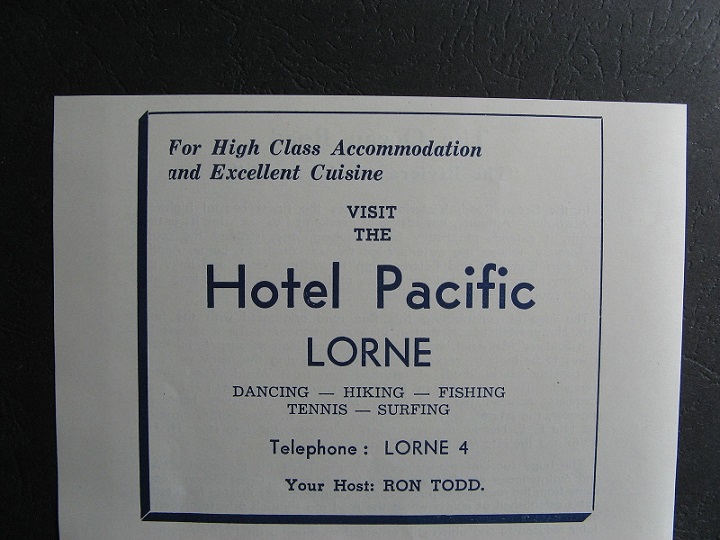 Former Williamstown superstar, Ron Todd, took over the freehold of the Hotel Pacific in Lorne in July 1951 and coached the Lorne football team in 1952 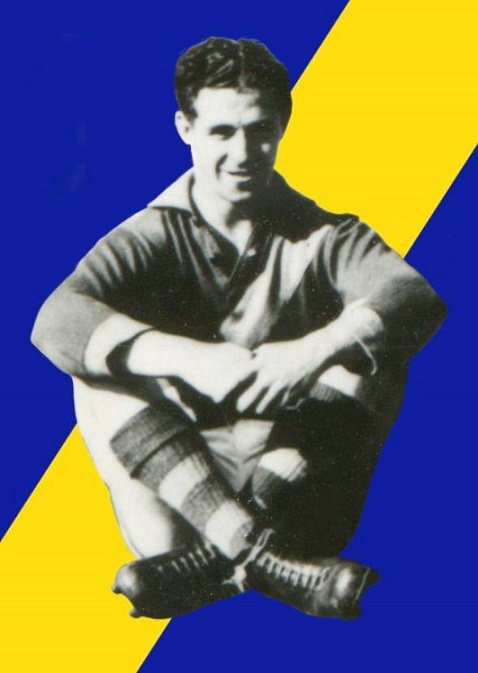 and 1948 runners-up, later coached WFC Thirds to the 1958 premiership, the Club's first.

The Club's Reserves best & fairest award was also named after him up until 2017. 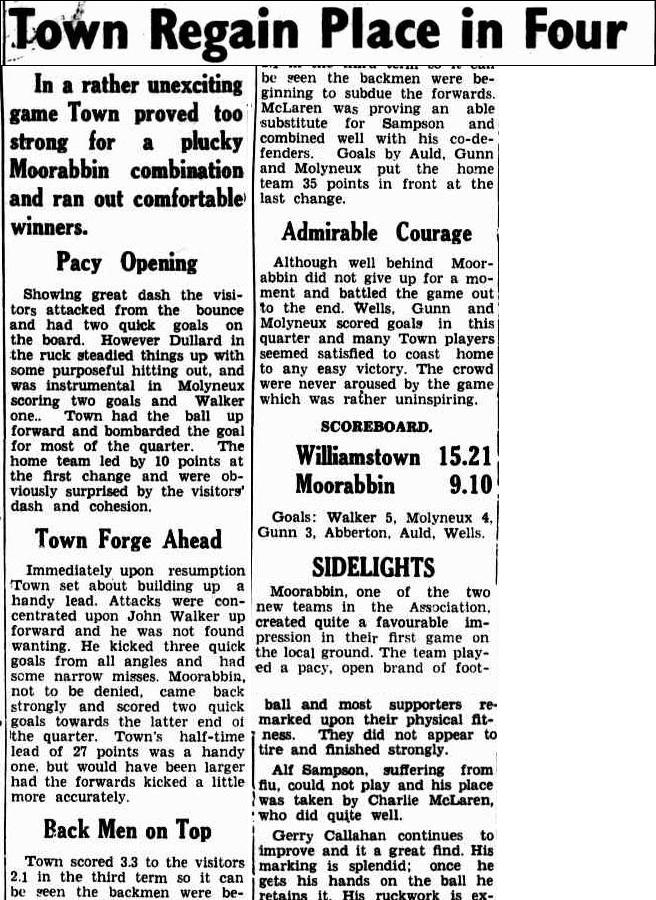 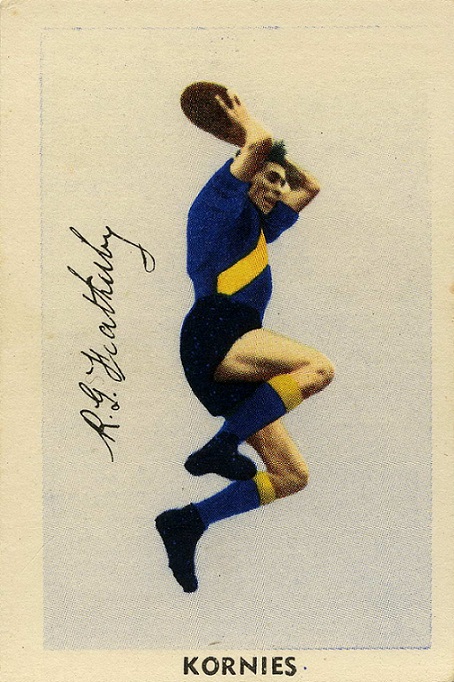 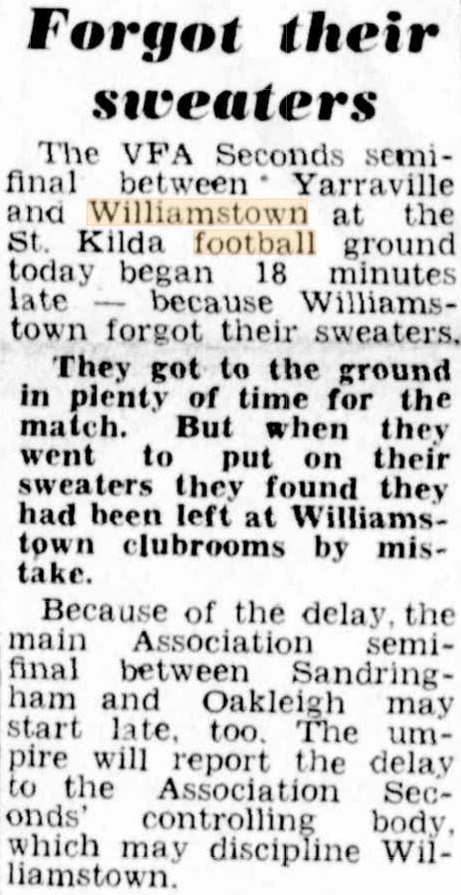 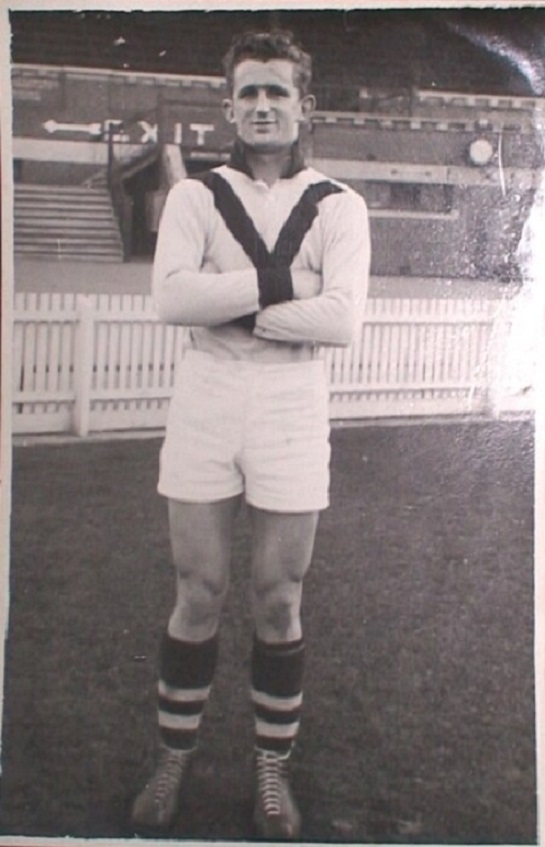 Williamstown's 1951 best first-year player, Bill Gunn, pictured here at South Melbourne's Lake Oval during the 1950's. Gunn's move to the Swans was used as leverage to get Billy Williams as Seagulls captain-coach in 1952 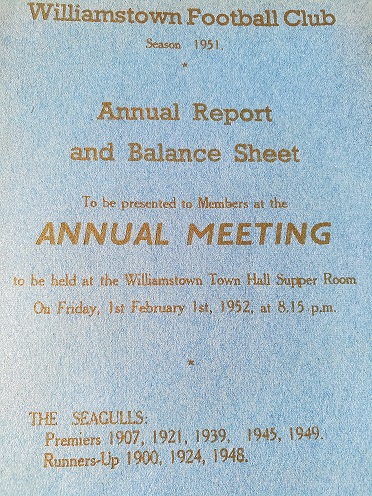 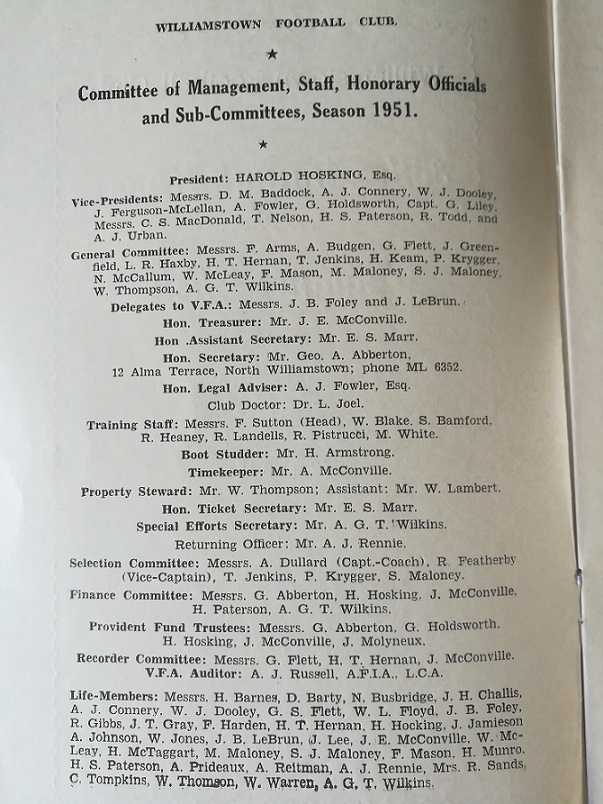 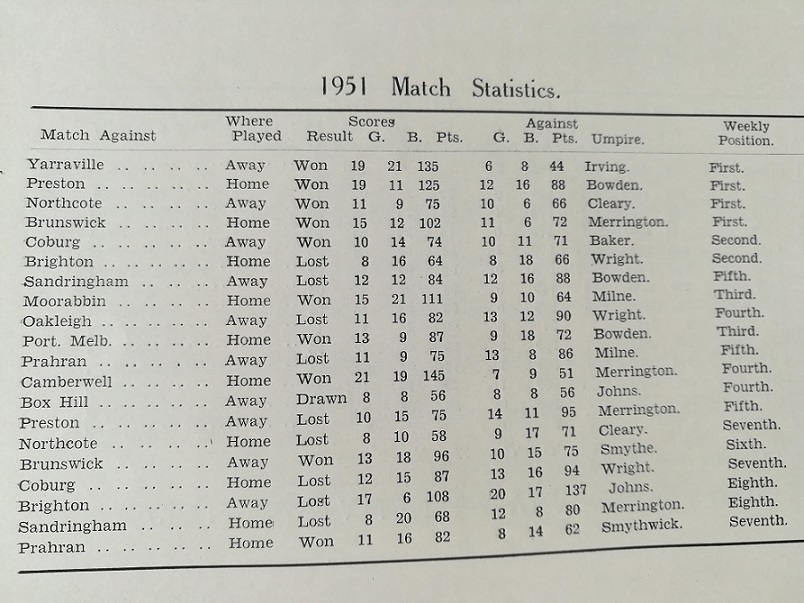 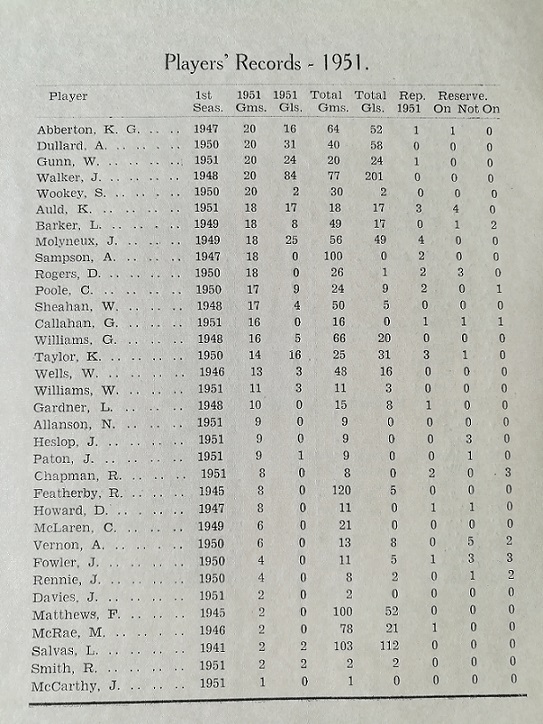 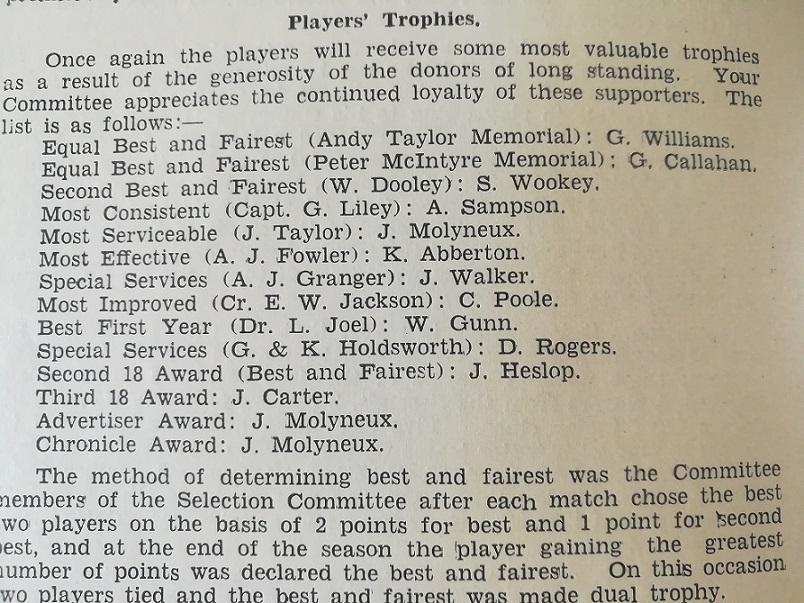 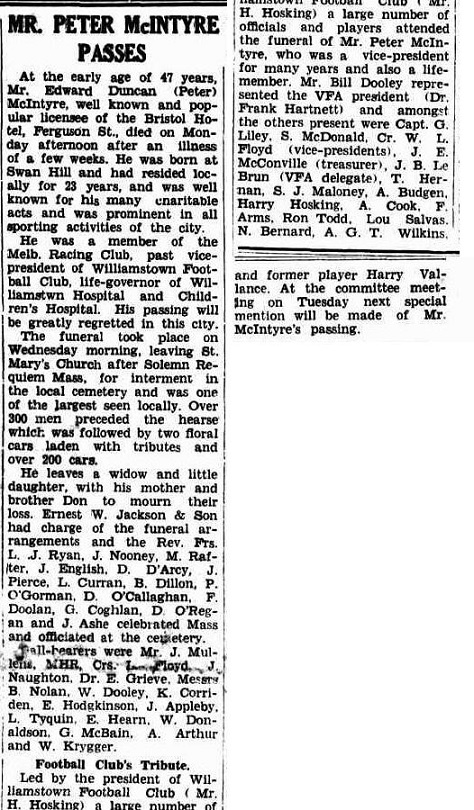 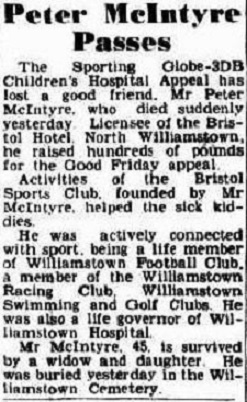 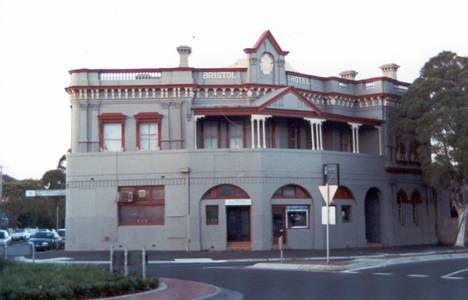 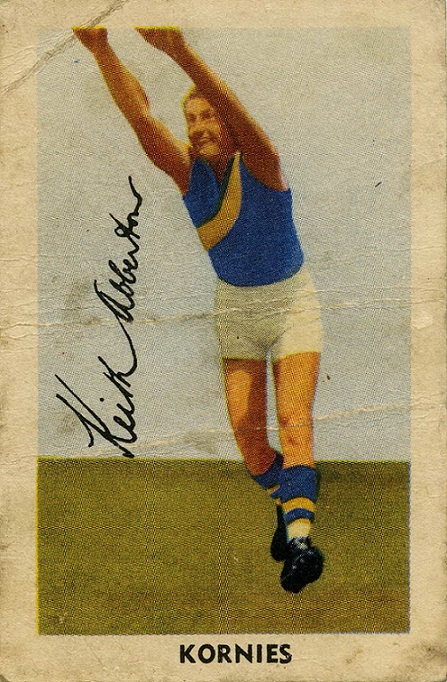 Keith 'Boots' Abberton finished with Williamstown after the 1951 season, having played 64 games and kicked 52 goals since 1947. He was a member of the 1949 premiership team. He went to Moe as captain-coach for the 1952 and 1953 seasons, returning to Williamstown for the 1954 premiership year, where he added a further 19 games and 18 goals to finish up with 83 games and 70 goals over six seasons. 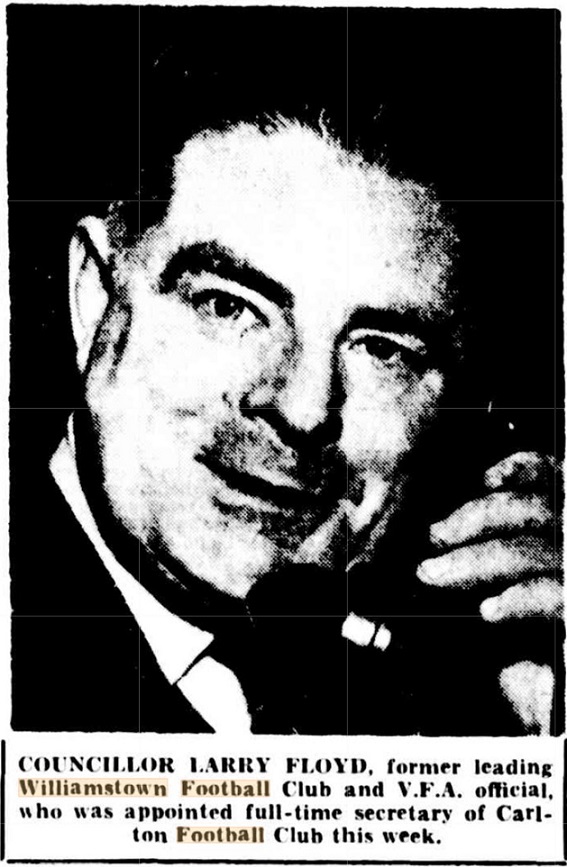 The Argus, July 26 1951 - Larry Floyd became Carlton's first full-time secretary in 1951 and served in that role until May 1955 when he was elected to the Victorian State Parliament where he remained as the Labor member for Williamstown until 1973. 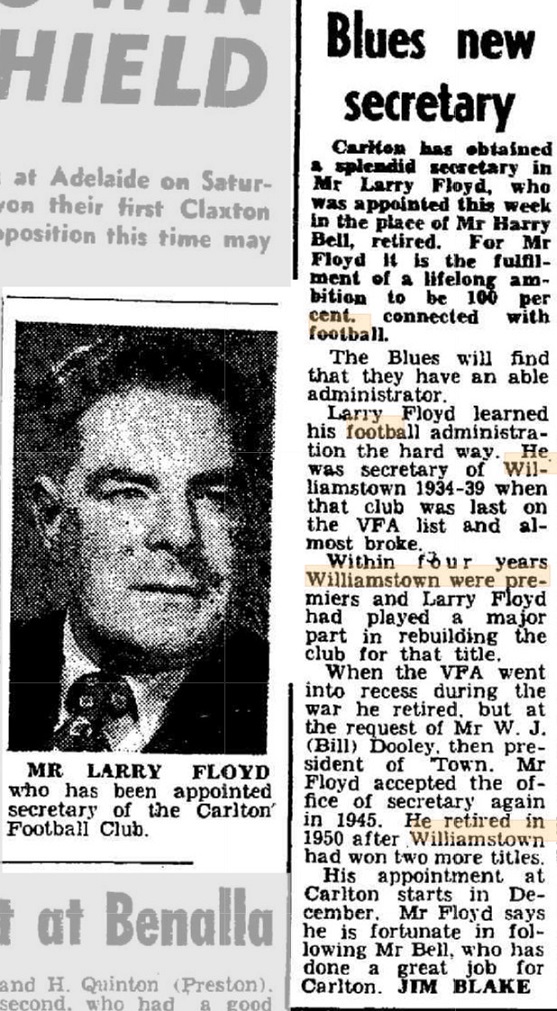 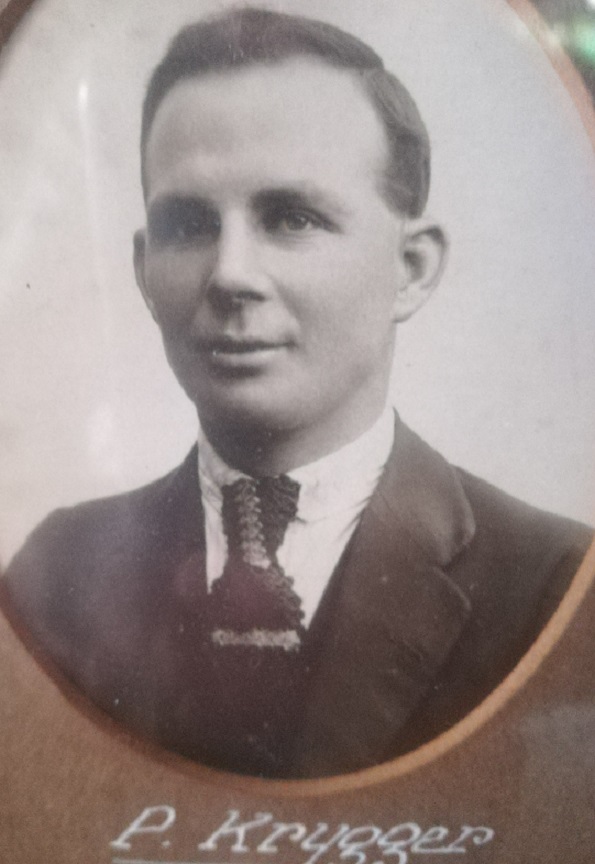 Parkin James Krygger was a Williamstown committeeman in 1951 and 1952.