How Williamstown survived the '95 merger 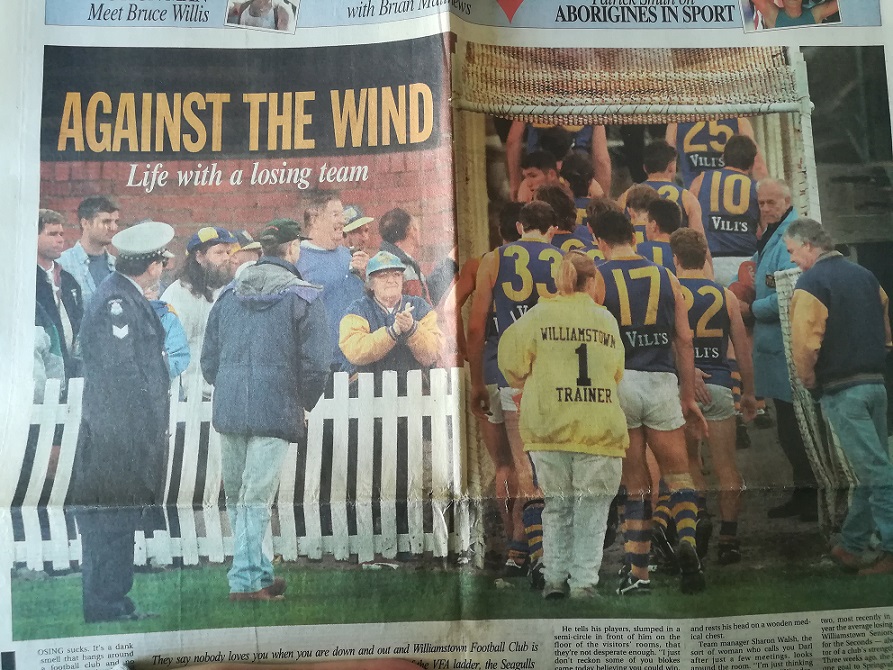 (Photo: 'Life with a losing team' was one of the many dark newspaper headlines seen during the 1995 season).

In 1995, Williamstown was staring down a dark barrel of extinction.

It’s Sunday, August 27, the Seagulls play Werribee in Williamstown in the last round of the home-and-away season. The result? A 104-point loss.

They had a record of 0-16 for the season, scored nearly 1,000 less points than second-placed Port Melbourne and finished with a measly percentage of 48.14.

In fact, Williamstown hadn’t won a game since August 1994.

What made the club’s demise in 1995 all the more serious was the scrapping of the competition; the 118-year-old association would be transformed into a new body formed under the title of the Victorian Football League (VFL).

The VFL’s proposal? For Williamstown and Werribee to merge and become the Western Seagulls in a bid to trim the competition’s metropolitan clubs from nine to eight.

The VFA’s oldest team, established in 1864, was about to lose its identity.

“I was informed very quickly about how the merger talks had resulted in about a three-minute meeting, it was like two rival biker gangs meeting half way in some place in Laverton,” football manager at the time Brendan Curry remembered in a Bruce Davis production titled ‘The Failed Merger & Rebirth’.

Greg Swann was appointed as the president at the end of 1995, in a time when the club was in a “bad way”.

"We literally had no money," Swann recalled.

“I was only 28 or something but I just thought ‘I’m gonna have a go at trying to fix this’.

“We were pushed into merging with Werribee, that was what the VFL wanted.

“So we went down there and we were going down there to effectively merge - four games at Willi and five games at Werribee, have an alternate strip, we play in a Willi jumper - so we went down and with a pretty well thought out plan, we thought it was reasonable, we weren’t happy about it but that was the way we had been pushed."

“We got down there and they started off by saying ‘Yeh we’re happy to merge, we’ll be called Werribee, we’ll play all our games at Werribee and we’ll wear the Werribee jumper’ and it was like ‘oh ok, that’s the way you wanna play it is it? So it’s fair to say it was a pretty tense meeting,” he said.

“We didn’t storm out or anything. When we finished, we stood outside and we said ‘right, the gloves are off’.”

And so began the fight to save the Williamstown Football Club.

Not surprisingly, the Williamstown community rose as one, stood arm in arm and ensured their beloved club would avoid what seemed inevitable extinction.

The famous rally known as ‘Save our Seagulls’, attended by over 1,000 people who unanimously rejected the proposed merger, was a glorious success. Gulls Coterie president Geoff Dougall reportedly told the meeting: "We’ll be here for the next 100 years.”

A petition signed by 1,200 people to save the club was also lodged in State Parliament, with the Victorian State Football League eventually voting in favour to retain the Williamstown Seagulls and hand them the eighth license.

Werribee were instead expelled, before securing re-admission.

“When that verdict came out, let’s just say it was 10 o’clock at night, I wondered out with my dog and I was standing in the street just looking up (thanking the heavens),” Swann said.

"We came back from the brink."

It’s fair to say this assignment was onerous, but drowning the club’s identity was never an option, for the club meant so much to its people, the community.

Premiership captain Troy West, who joined the club in 1994, said while it was tough not winning games and lacking on-field success, in a strange way it brought the playing group together.

“It was frustrating, but even the fans and the off-field staff, it was just (we’re) all in it together,” he said.

“At no stage can I remember any of the people on the sidelines bagging players or having a crack at us for not having a go or anything like that.

“The Williamstown footy club was gonna fold. They were touting it as a merger with Werribee, although everyone knew it was effectively gonna be a takeover.

“Just making a stand and saying we weren’t gonna accept the mediocrity and the lack of success. We weren’t gonna stand for being taken over or merging with Werribee.”

And so 1996 marked the beginning of the new ‘VFL’ era. Williamstown’s opponent in Round 1?

The Seagulls won by 23 points under new coach Mervyn Keane in what some described as one of the great moments in the club’s rich history.

It had been nearly 20 months since they last tasted victory after all.

“Personally going through ’95 and losing every game, and then to win that game and be coming off the ground arm in arm with the rest of the players - not everyone played through ’95, we had a whole heap of new players come in, but the players that were there knew what it meant. It was like winning a grand final,” former player Adam Hough said.

“We were challenging Werribee, they were dirty on us because they had been kicked out of the comp after Williamstown had been given the nod.

“It’s still one of my favourite days of football ever. The scenes in the rooms after that game, you probably wouldn’t see it now where there’s about eight slabs carried in, everyone’s necking cans, we sang the song that loud.

“It was the old rooms where I don’t know how we didn’t knock the wall down between us and Werribee.

“It was justification for having the fight, winning the fight to survive and getting a result against an arch enemy.”

Williamstown experienced a rapid change of fortunes and finished the 1996 season in fourth position, with 11 wins, six losses and a draw. Seagull Paul Dooley won the Liston Trophy that year.

No matter how trying the obstacle, Williamstown has a knack for sticking together and overcoming adversity.

Watch Bruce Davis' full JUMP in the RIVER Productions video below, as Adam Hough, Troy West, Brendan Curry and Greg Swann take you through a grim 1995 season. Further newspaper snippets can also be viewed below. 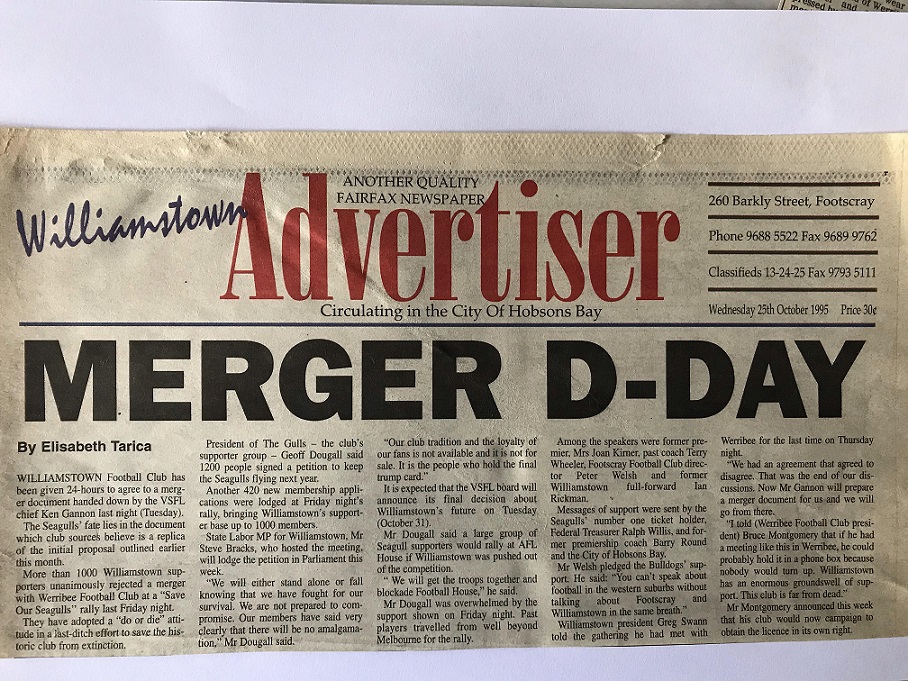 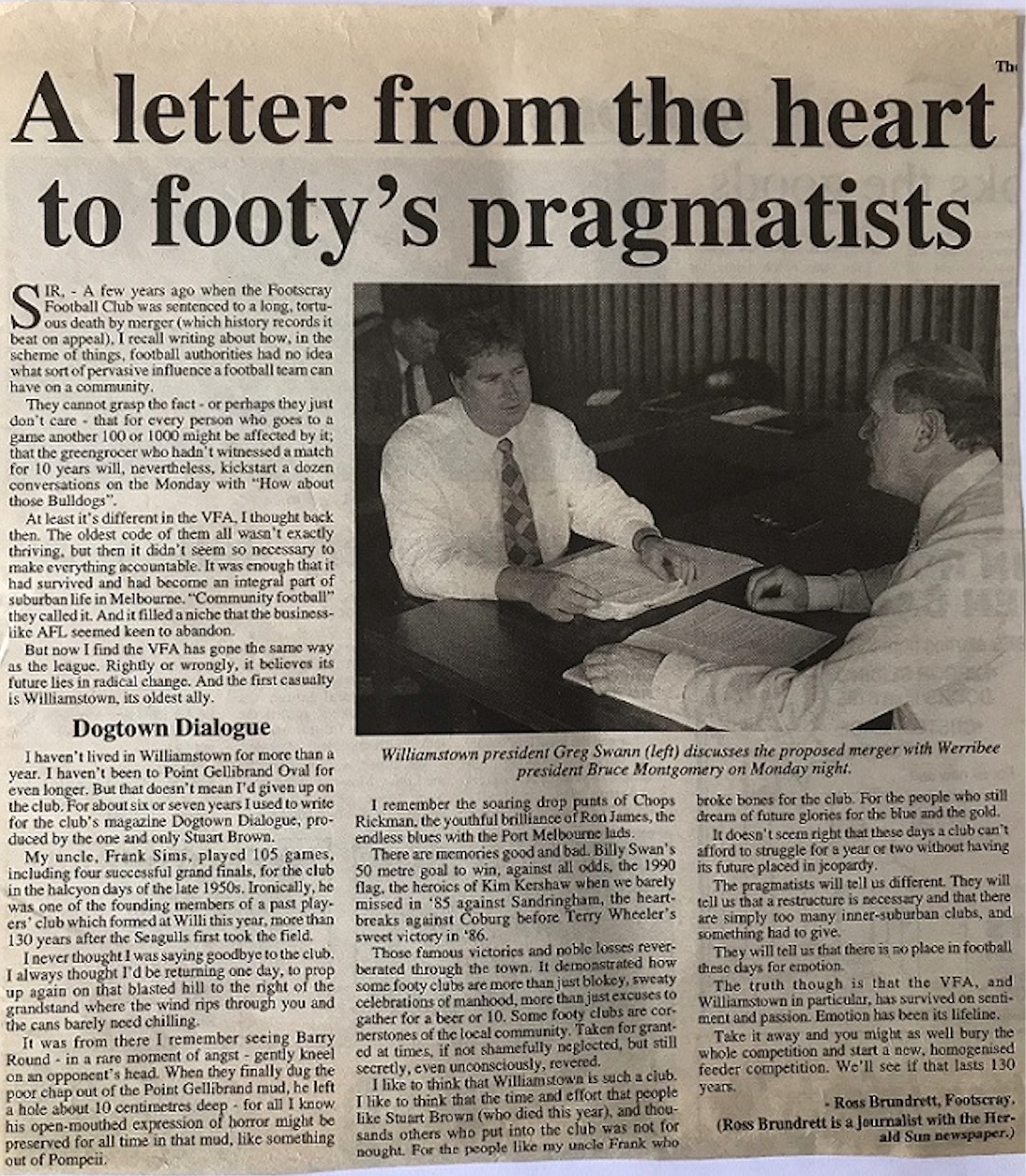 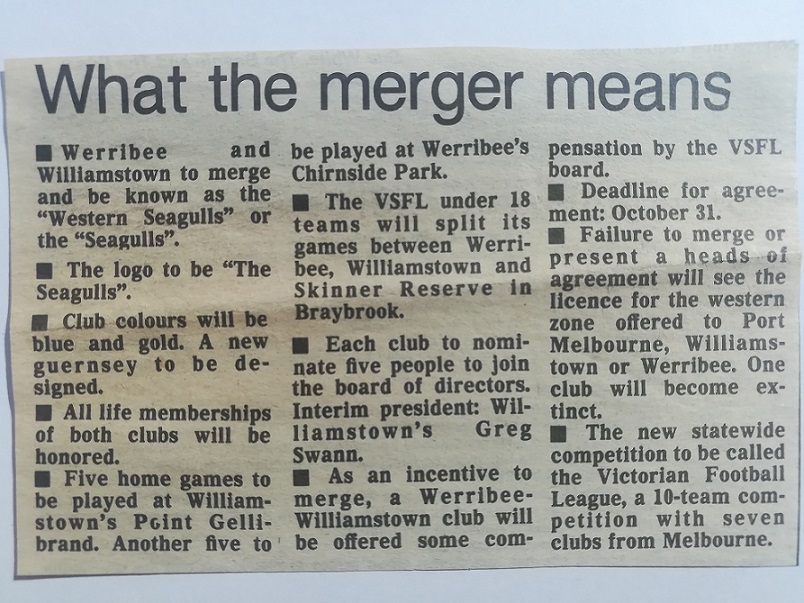 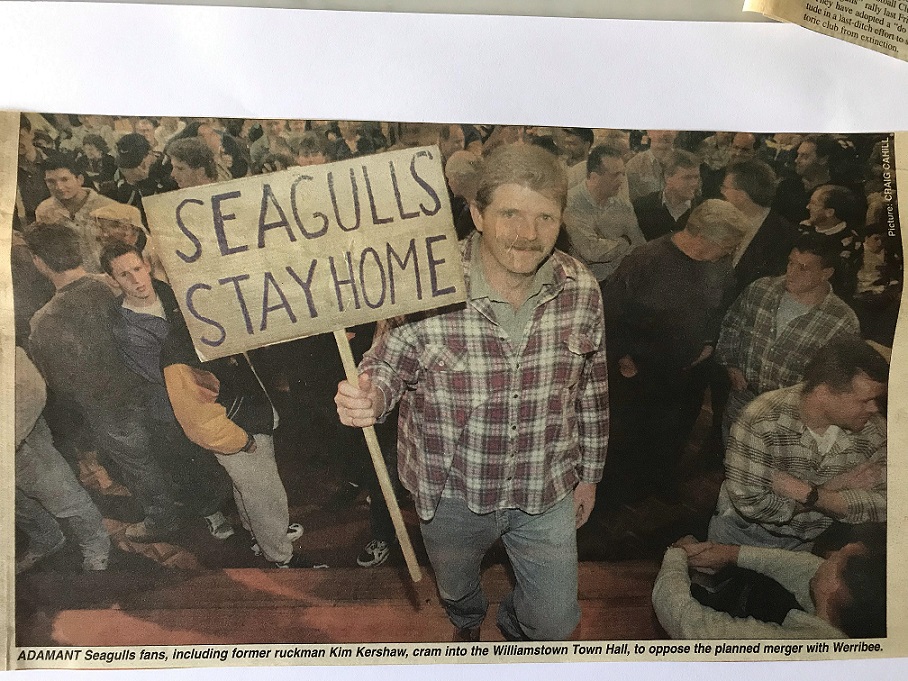