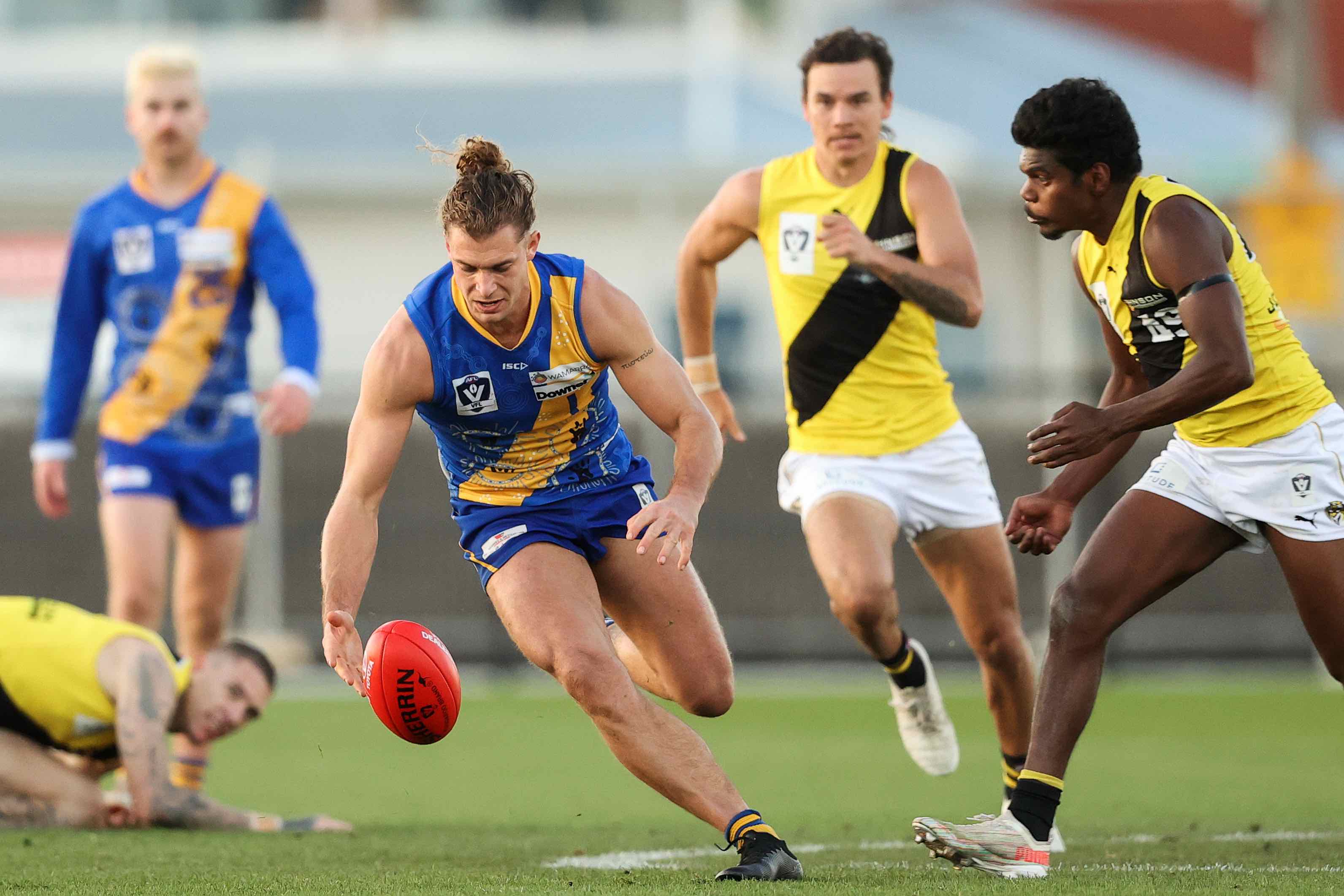 The 2019 VFL Grand Final rematch lived up to the high anticipation that surrounded it in the build up, after Williamstown and Richmond played out a thrilling draw at Downer Oval on Sunday.

In what was an enthralling and tight contest for four quarters, scores were level with seconds left in the final term before Mitch Hibberd was awarded a free kick from 50-metres out.

Hibberd's shot looked to be sailing through the middle as the siren sounded. But in dramatic circumstances, the ball was punched back from the goal line and pinballed back through for a behind. As the ball was technically dead, no score was registered and the two teams were left to share the premiership points.

It was a gallant effort from Williamstown whose training had been severely compromised having not played a match since Round 5 and enduring a three-week lockdown, with the side facing a Tigers outfit fielding 18 AFL-listed players.

Nick Ebinger was one of the more entertaining forwards for the afternoon kicking two goals and taking seven marks - including a high-flying hanger midway through the second term.

Billy Myers and Hibberd were the other multiple goal scorers for the day, with the latter also finishing with 27 disposals.

Liam Hunt was also prolific with 26 touches, while Teia Miles finished with 24.

Premiership player Nick Sing was a late inclusion into the side replacing fullback Jack Leslie. youngster Mitch Mellis also came in to make his debut and didn't look out of place.

It was also a proud day for the entire Club who celebrated its Wamarra Indigenous Round this weekend, the VFL side donning specially-designed guernseys.

On a sunny but windy afternoon at Downer Oval, the competitiveness was on show between two sides who had plenty of recent history between them.

After trading behinds for the first half of the first term, it was Myers who took a strong grab in front of goal and converted his set shot to kick the first major of the game.

The Gulls then fired two further goals in quick succession with Hibberd and Noah Gown extending the early lead to 15 points approaching time on in the opening quarter.

Richmond then responded with back to back goals of their own before Myers found his second goal to give the home side a nine-point lead at quarter time.

It was the Nick Ebinger show in the second quarter.

The dynamic forward was a dangerous aerial threat and took four contested marks, kicking two goals and producing the highlight of the match with a screamer 10 minutes into the term.

Joel Ottavi also kicked his 10th goal of the season in the second term with the Seagulls' lead reaching as high as 22 points midway in the quarter.

The Tigers then kicked three of the next four goals to round out the term, however Ebinger’s second goal for the afternoon at the 26-minute mark helped keep the lead to seven points at half time.

After the Tigers kicked the first of the second half, Hibberd and Corey Rich combined for back to back goals to help steady the ship for Williamstown.

The visitors responded with two of their own majors soon after before Daly Andrews produced a belter of a goal, launching a long shot from beyond 50 metres out to keep the margin at seven points heading into the final change of ends.

The margin didn’t reach higher than seven points either way in the final term in what was an intense and nail-biting quarter.

Richmond kicked the first two goals of the last term to give themselves a six-point lead midway through the quarter - the first lead they had in the match since a three-point lead early in the first term.

With the game in the balance in the closing stages, it was skipper Adam Marcon who found some room close to goal and snapped truly to once again level the scores with only a few minutes remaining.

Hibberd then gave himself an opportunity to produce a score to give his side the lead with the final kick of the game as the siren went, but his shot fell centimetres short.