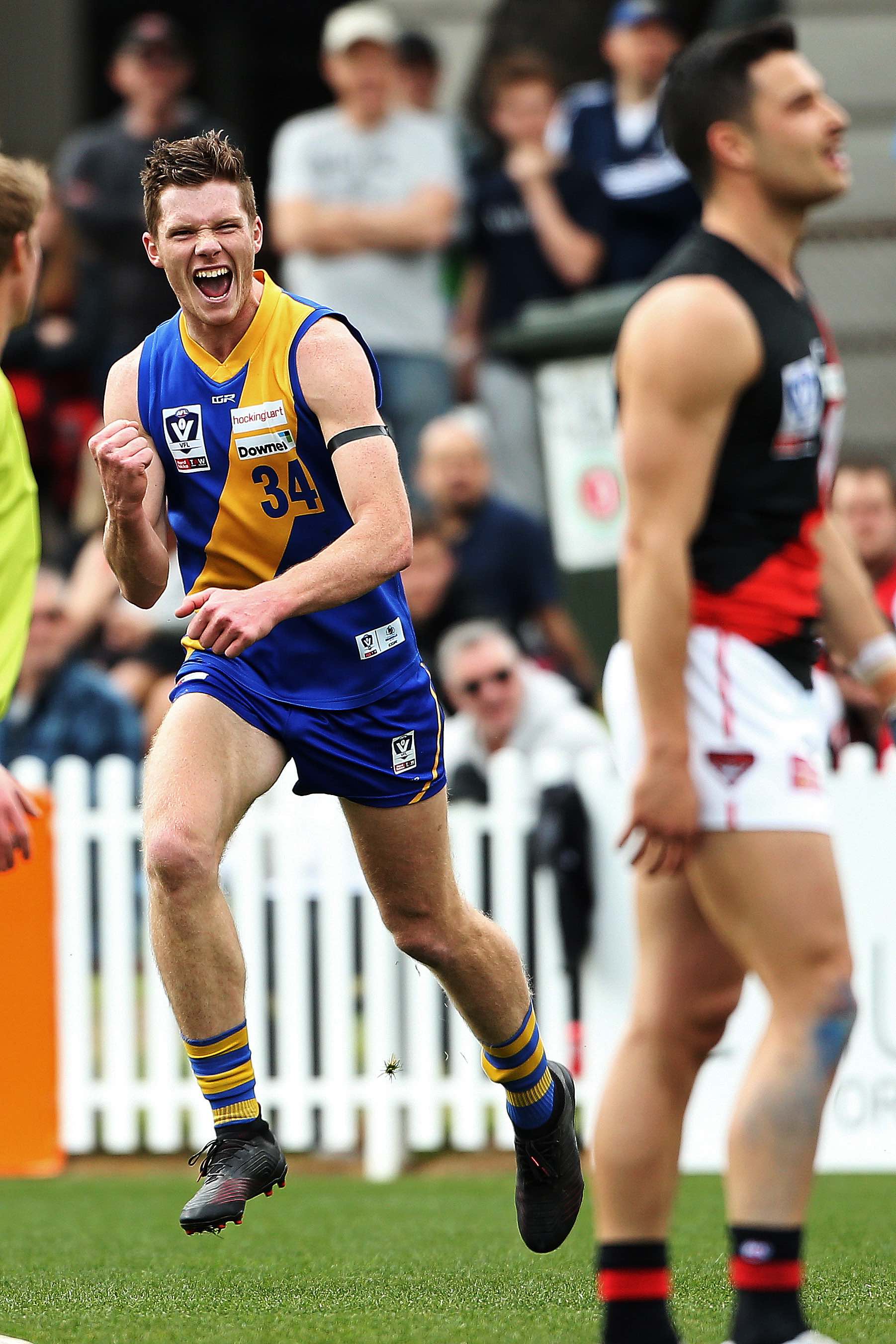 Joel Ottavi celebrates a goal in the 2019 preliminary final. (Photo by Martin Keep).

Article published by vfl.com.au on November 13

A retiring VFL ruck champion helped Joel Ottavi establish himself at Williamstown this year after only five games across his previous two seasons at state-league level.

23-year-old Ottavi crossed to the Seagulls from Essendon’s Hard Yakka / Totally Workwear VFL team for 2019 and surpassed all his expectations to play in 18 of 21 games for the beaten grand finalists.

The key to his breakout campaign was the 200cm big man’s ability to play both as a strong-marking key forward and pinch-hitter in the ruck – a skill set that saw him invited to the recent Victorian State Combine ahead of November 27-28’s NAB AFL Draft.

Ottavi booted 22 goals this season – second behind only Nick Rodda (31) at Williamstown – as well as averaging eight disposals, 3.5 marks (two contested) and 11 hitouts per game, displaying the promise he hadn’t consistently been able to show with the Bombers in 2017-18.

Previously known mostly as a forward, the East Point (Ballarat FL) local added a string to his bow under the tutelage of departed Seagulls 2015 premiership player and seven-time VFL Team of the Year member Nick Meese.

“From what I’ve been told, my ability to go into the ruck is the biggest factor (in attracting AFL clubs),” Ottavi said. “I can go forward and take clunks (contested marks) but also hold my own in the ruck now.

“‘Meesey’ was huge for me this year. He’s been the most dominant ruckman in the VFL for years, so to have him mentoring me was unbelievable. The improvement in my ruck work over the year would never have been what it was without him.

“He was full of advice. He always kept telling me: ‘It’s a simple, simple game. Just get yourself in between your opponent and where the ball’s going to land.’ He was adamant that it’s a simple game.”

Ironically, Meese’s misfortune in suffering an injury during Williamstown’s Round 15 victory over Collingwood presented the best chance for Ottavi to show his credentials to AFL recruiters.

He assumed the majority of the team’s ruck load until Meese returned in Round 19, averaging 12 touches, 4.5 marks, 22 hitouts and five tackles per game in an impressive three-match stretch.

“I sort of knew I could play at VFL level; it was just about getting that continuity and playing a few games in a row to build the confidence up,” Ottavi said.

“I was pretty consistent to start the season and then when ‘Meesey’ got injured, I played a couple of good games and felt like I really belonged.

“I set a goal at the start of the year to play five to 10 games, so I didn’t expect to have the season that I had. I had to pinch myself every now and then.”

The promise of greater opportunity tempted Ottavi to leave the Bombers at the end of 2018, a decision he described as “tough” given Essendon VFL senior coach Dan Jordan had originally brought him into the system from Buninyong (Central Highlands FL).

Ottavi had previously trained with NAB League outfit the GWV Rebels ahead of his draft year of 2014, an experience that sparked his ongoing quest to take his football to higher levels.

“I really did enjoy my time at Essendon,” Ottavi said. “But I just felt that with the AFL alignment it was always going to be hard to break into the side and then cement a spot.

“With the amount of talls Essendon had, I thought I’d try my luck elsewhere and Williamstown rang me during the off-season.

“They’d just lost a forward/back-up ruckman to ‘Meesey’, so (senior coach) Andy Collins said that if I came down and worked hard and showed that I wanted it, there was a spot available for me. After playing only five VFL games, I didn’t really expect anyone to know what I’d done or if I could help them, so it was a bit of a surprise.

“It was a bit of a confidence boost too, though.”