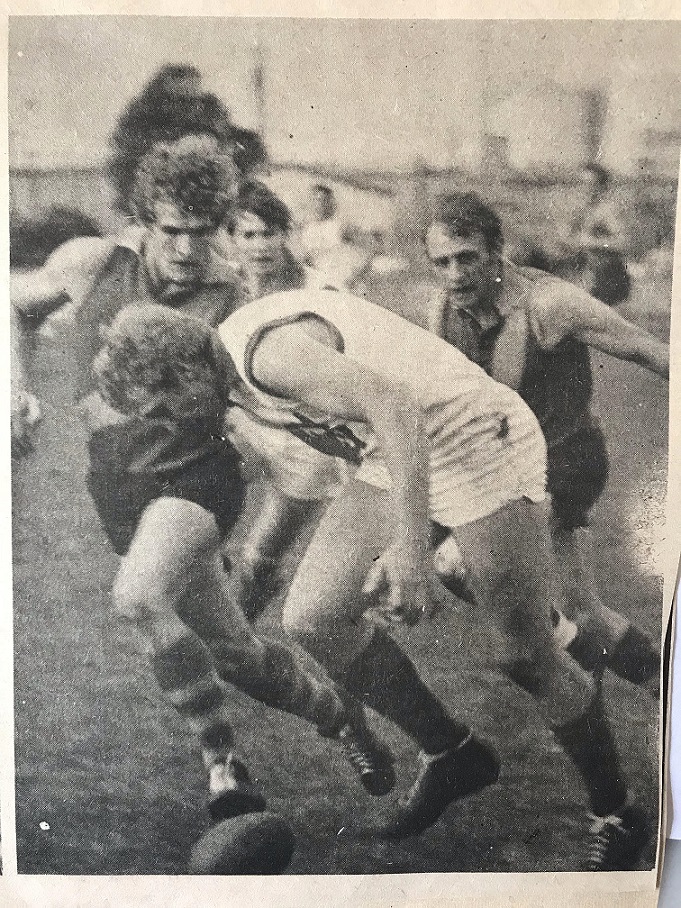 Ron Page (left) and Bobby Smith close in on a Geelong West opponent in the opening home game of the 1970 season, following the unfurling of the 1969 premiership flag.

The Williamstown Football Club is sad to announce that in the lead up to Christmas, the Club lost two former players in Keith Stanley Rae and Ronald Charles Page. Keith's passing will be acknowledged in a separate article.

Ron Page passed away peacefully on Christmas Eve at the age of 70 surrounded by his family.

Ron played at centre half-back in the number 29 guernsey in the Second Division final against Geelong West at Toorak Park which was lost by two goals in a high-scoring match, 20.15.135 to 18.15.123. Ron played on the Geelong West captain-coach, Brian Brushfield, who was a former Geelong VFL player. Ron played 14 games in his first year of senior VFA football at a strapping 6 foot and 13 stone.

Ron played at centre half-back once again in the 1969 decider at Toorak Park against Sunshine. This time the Seagulls were victorious, notching up a 20-point win over their western suburbs rival to return the Club to First Division. The team came from 9 points down at three-quarter time to boot 5.5 to a single goal by the Crows in the last quarter. On this occasion, Ron played in the number 3 guernsey, kicked one goal and was named in the best players. He played 19 games and kicked 8 goals in his second season of senior VFA football.

Ron was once again named at centre half-back in the 1970 First Division grand final played at St. Kilda’s Junction Oval against the Kevin Rose-led, Prahran. Williamstown became the first Club to rise from Second Division to compete in the following year’s Division One premiership decider. A now 19yo Ron, at 6’1” and 14.7 stone played his 50th senior VFA game in this match, which resulted in a crushing 50-point defeat, 17.18.120 to 10.10.70. Ron played 17 games and kicked 15 goals in his third season of senior VFA football. 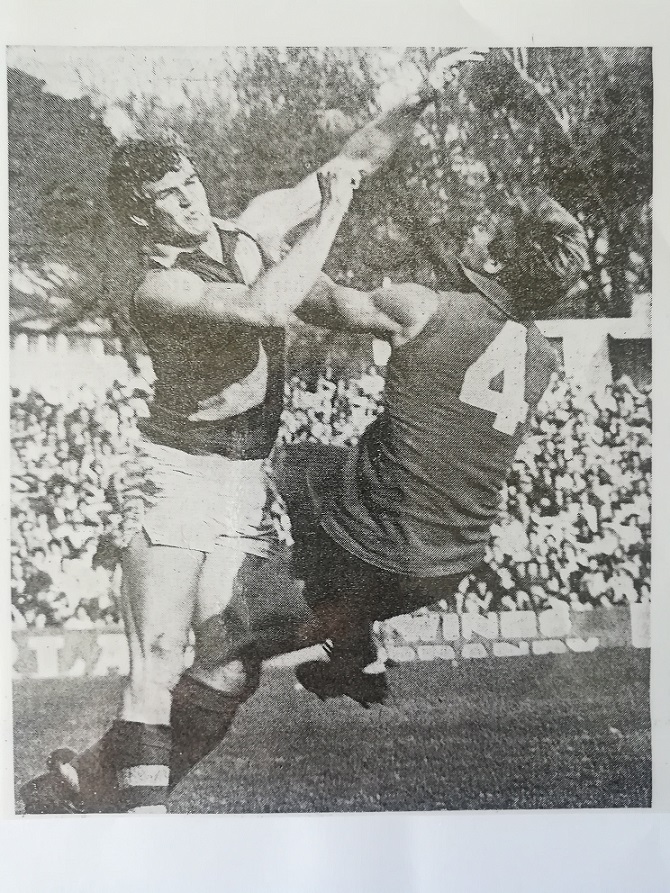 Ron was then recruited by VFL club, South Melbourne, in 1971 and played three consecutive senior games in round 2 (v. Geelong at the Lake Oval), round 3 (v. Footscray at Whitten Oval) and round 4 (v. Richmond at the Lake Oval). In his brief senior VFL career, Ron was coached by the legendary Norm Smith and played with such illustrious names as Peter Bedford, Gary Brice, Ricky Quade, John Rantall and Bob Skilton and against Billy Goggin, Ian Nankervis, Doug Wade, Gary Dempsey, Bernie Quinlan, Barry Round, Kevin Bartlett, Francis Bourke, Royce Hart, Kevin Sheedy and Ian Stewart.

After spending most of the season at South Melbourne in the Seconds, Ron then moved to South Australia and played for Woodville in the SANFL for the next three seasons, where he notched up a total of 29 senior games and kicked 4 goals, and played in the Woodville Seconds premiership team in 1973.

In 1975 Ron returned to Williamstown to play under Ted Whitten and was given his number 3 guernsey once again and played a further 17 senior games and won the Best Clubman award in an unsuccessful season which saw the Seagulls win only 4 matches, finish last and relegated back to Second Division.

A 25 year-old Ron Page played 11 senior games for the Seagulls in his final season with the Club in 1976. It was another premiership year for Williamstown but Ron was not selected for the grand final. He finished up with a total of 78 senior games and 34 goals since his debut in 1968. Ron then crossed to Yarraville and was still playing in 1981 when he was opposed to his nephew, Ian Fairley, who was then in his second season with Williamstown. Ron then became coach of Williamstown United in 1982.

A tribute to Ron's contribution to the Williamstown Football Club is his selection in a forward pocket in the Club's 1970's Team of the Decade.

Ron’s father, Cecil (Cec) Page, was a local butcher who was also a committeeman of the Club from 1967-77 and received life membership of the Club in 1976 before passing away in 1977. A trophy was then awarded by the Club in his name from 1978 onwards to be given to the player considered to be the most consistent over the course of the season. Ron’s sister, Janet, is the mother of Ian Fairley, who played 38 games and kicked 85 goals with Williamstown from 1980 until early 1983 before going on to play 217 games and kick 149 goals with North Melbourne up until the end of 1996, including an AFL premiership in his final season.

Ron was married to Jen and was a father of four children in Carolyn, Adam, Casey and Luke and a grandfather of nine.

His funeral was held at the Tobin Brothers Chapel in Werribee on Thursday, January 6.

Further details are at the following links:

Information compiled and with thanks to Gerard Drew.